Currently on view at Birch Libralato is Kelly Richardson’s latest video installation, Orion Tide. Drawing from the aesthetics of sci-fi films and dystopian stories, Orion Tide presents a Roswell-esque desert with spurts of light and smoke repeatedly taking off into the dark night sky. As a part of this year’s CONTACT festival, Orion Tide rests somewhere in the territory between science fiction and biblical wraths. By uniting the cataclysmic commonalities that both worlds share, Richardson created an apocalyptically sublime space in which all ideals dissolve and a universal transition is made for whatever may come next. Be it rapture or evacuation, the solution of departure is immensely satisfying to witness. Self-destructive yet soothing, Richardson convinces her audiences that however bleak, a conclusive end possesses great beauty. 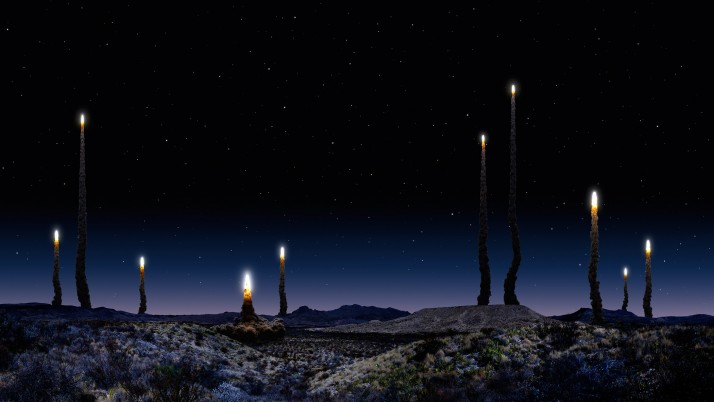 In keeping with Richardson’s practice, Orion Tide questions the fine line between truth and fiction by challenging our ability to assess the integrity of images. Hinging on the fringes of reality and fantasy, the schematics of Orion Tide seem entirely plausible for today’s world. The work’s lack of specificity and ability to conjure the familiar poses an array of questions. Simultaneously convincing yet synthetic, the balanced ambiguity of the scene could be a peaceful ascent towards the heavens, a forced migration, or an exploratory venture towards the unknown. Ultimately, Richardson does not grant us any definitive answers, forcing her audiences to consider the “evocative power of the imagination” and the blurring line between what is possible and impossible. Through a carefully calculated application of digital effects and documentary footage, Richardson questions the credibility of what we see and our increasingly mediated doors of perception.