2014 marked the 7th annual installment of The Artist Project, a four-day long art fair dedicated to the display of contemporary artists from Canada and abroad. Fellow streetcar travellers repeatedly asked “Is this the way to that art thing?” as we made the trek together to the Better Living Centre, braving the sloppy weather conditions to attend the Opening Night Party on the eve of February 20th. 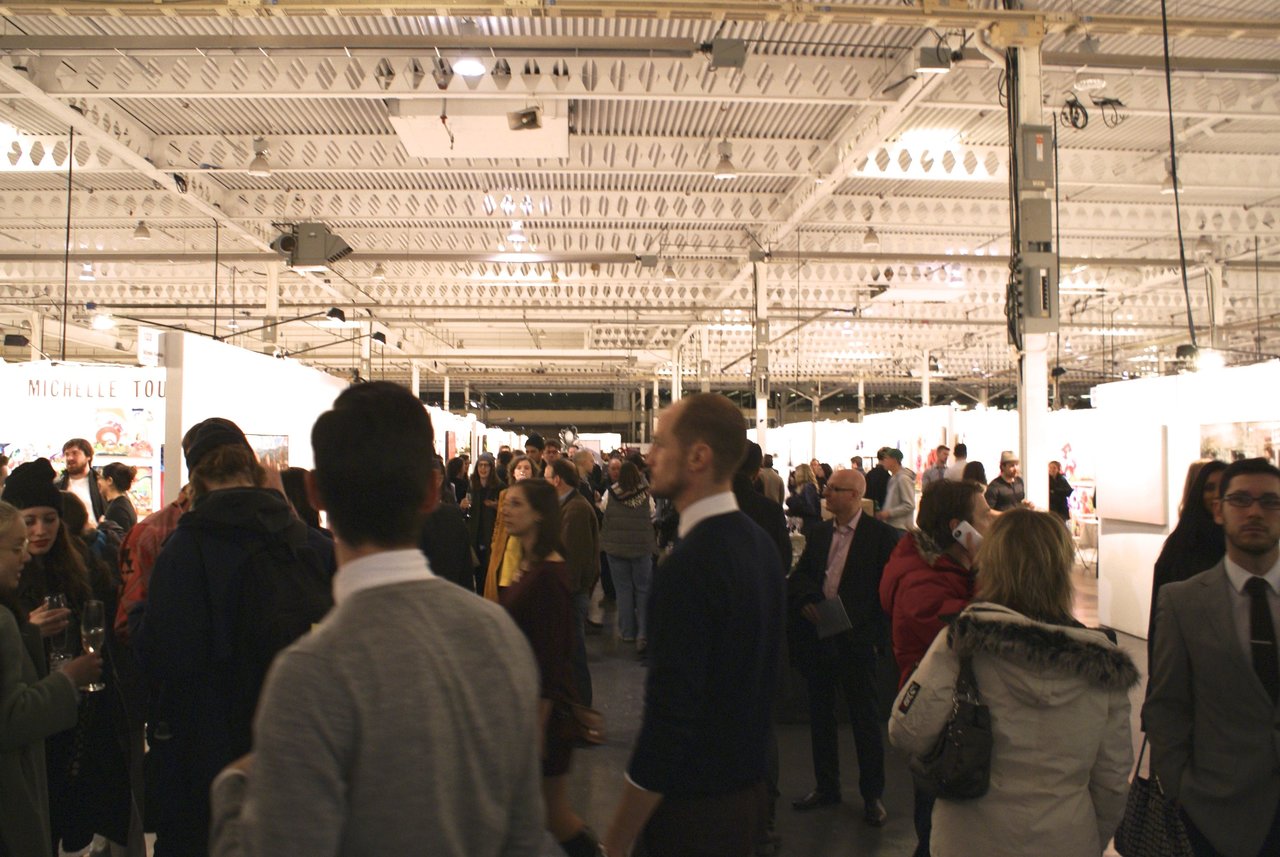 What sets The Artist Project apart from more traditional gallery curated art fairs is simply; here you will find the artists themselves working in their own booths. The presence of the artist offers some obvious advantages to the consumer, whether seasoned art collector or first-time buyer. Guests are able to converse with the artist, ask them questions about their work, and get a better understanding of the person behind the artwork instead of speaking with a “middleman” art dealer. Yet, despite these seemingly advantageous results of having the artists present, I couldn’t help but notice its adverse effect. While physically there, many of the artists were not “present,” seeming generally disinterested and texting on their phones throughout the night rather than conversing with those interested in their work. By no means was this true of all the artists in attendance but it was a fairly noticeable percentage. This was not, however, solely the fault of the artists. With over 250 artists exhibited in the show, not everyone’s work received a positive response from the crowd. This unfortunate fact was predominantly caused by two factors: the location of the booth (artists bound to the periphery received little attention simply due to lack of foot traffic) and ultimately, the quality of the work. I couldn’t help but feel bad for those who received little attention; some responded by eagerly latching on to anyone that came within a foot of their booth while others turned to their phones. 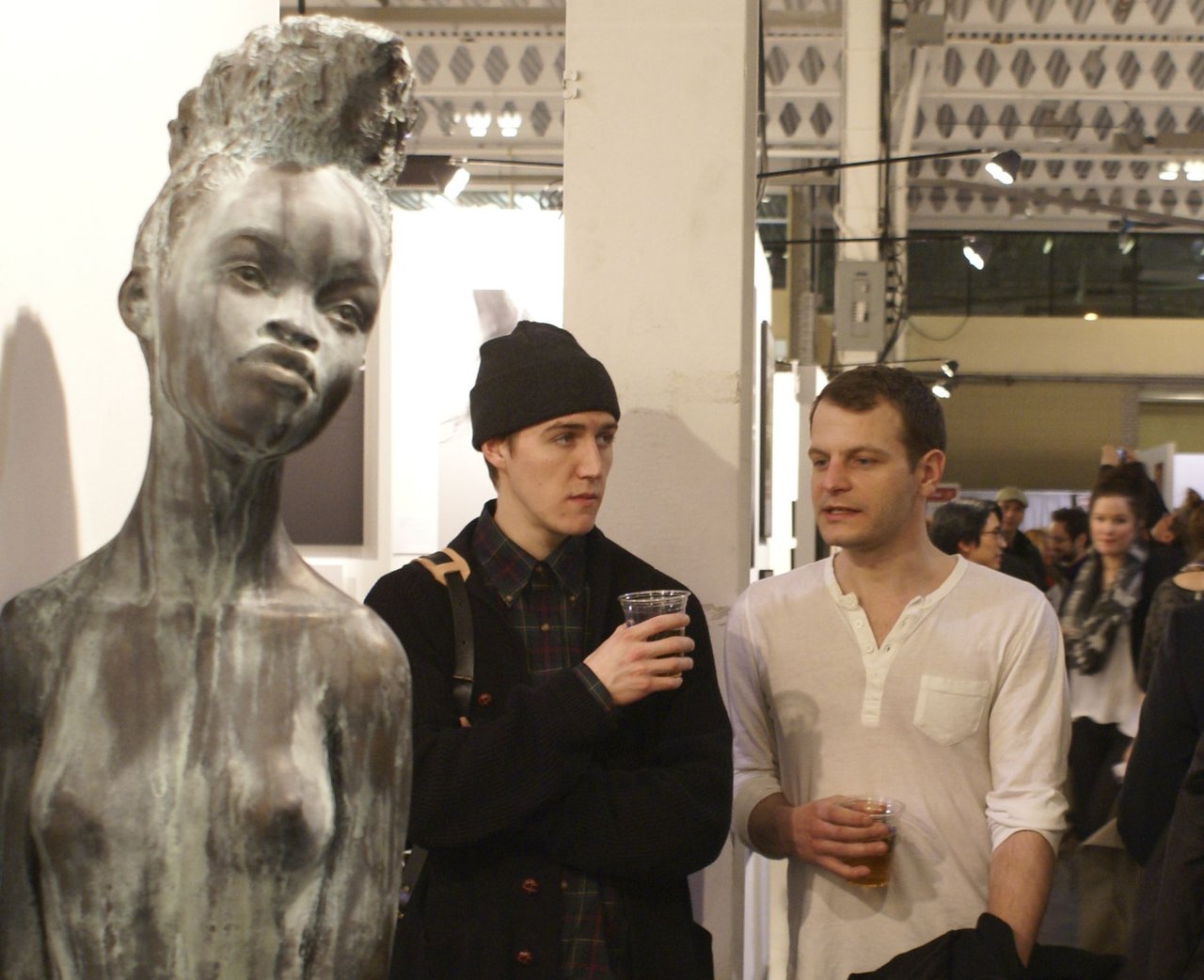 Guests converse behind Gosia’s Into the Blue II. 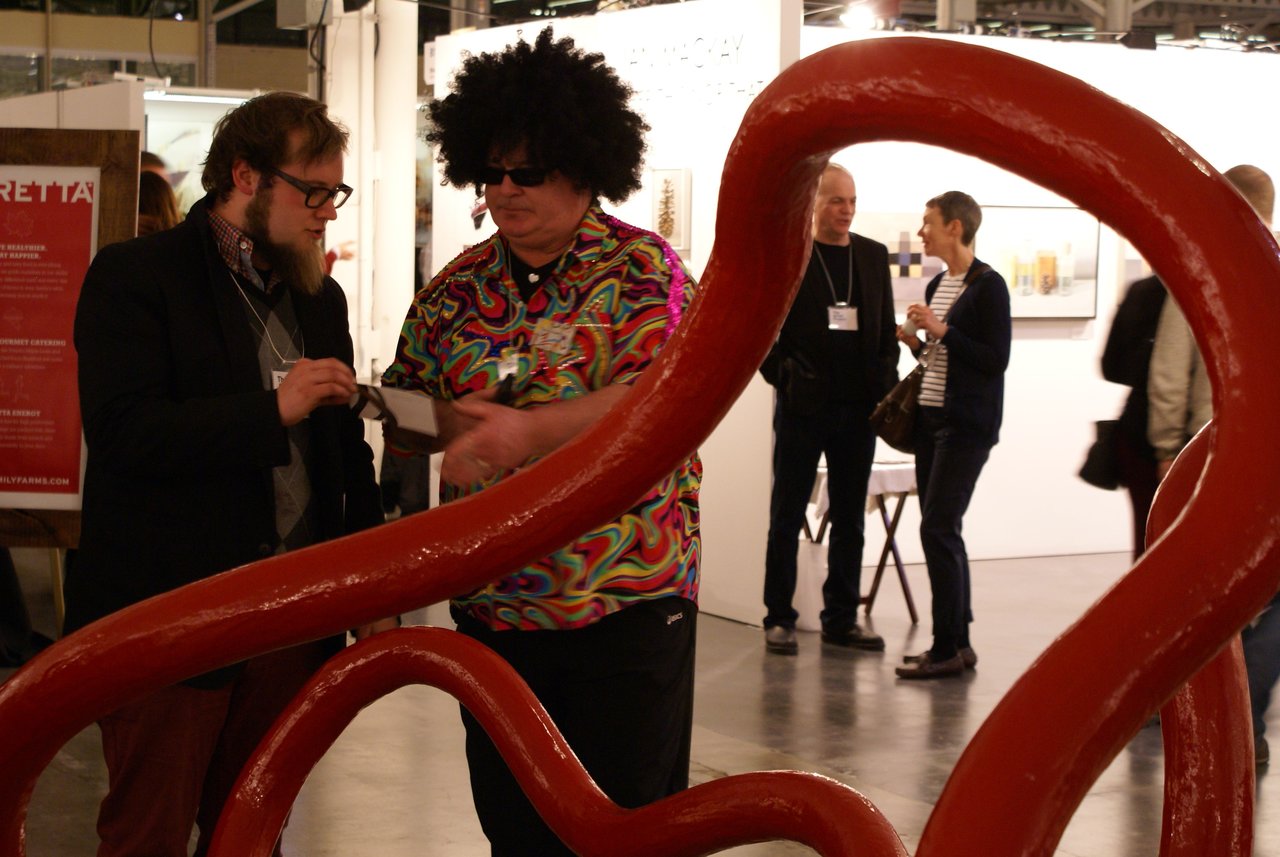 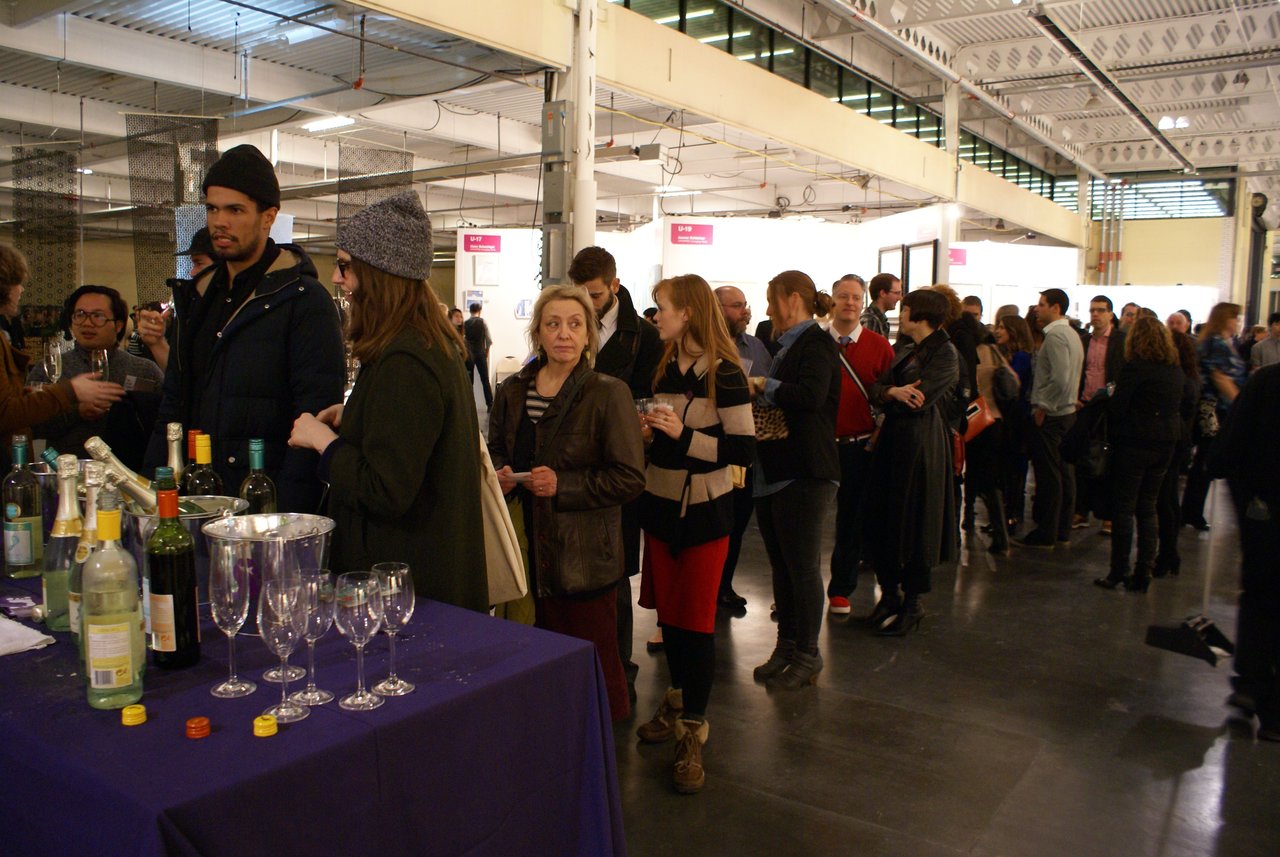 The most popular place, an endless line for wine.

But in speaking of quality, let us now turn aside the politics of the art fair and focus on the actual art exhibited in the show. While much of the art fell into conventional categories more likely to be found in a hotel than a museum (the affordability of much of the art may have come at a cost to the quality) the show still produced a few standouts. 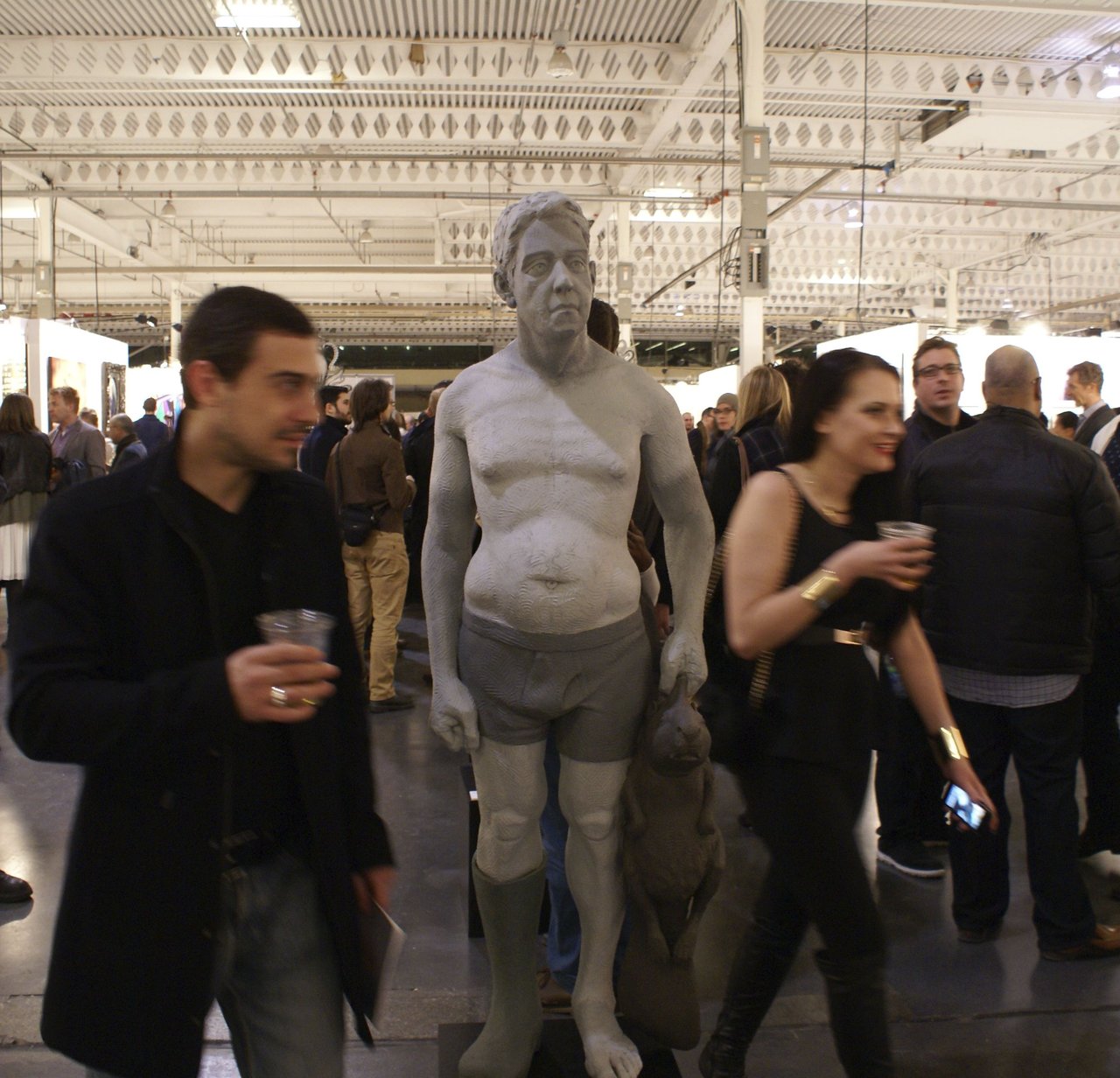 Nicholas Crombach’s cast resin sculptures were a big hit. You may remember Crombachs’ work from a posting here last year, as his work Man with Child’s Bow and Arrow won the top prize at the Canadian Sculpture Centre’s Emerging Sculptors Exhibiton. A recent graduate of OCAD’s Sculpture and Installation program, Crombach is one to watch in Toronto’s burgeoning art scene. 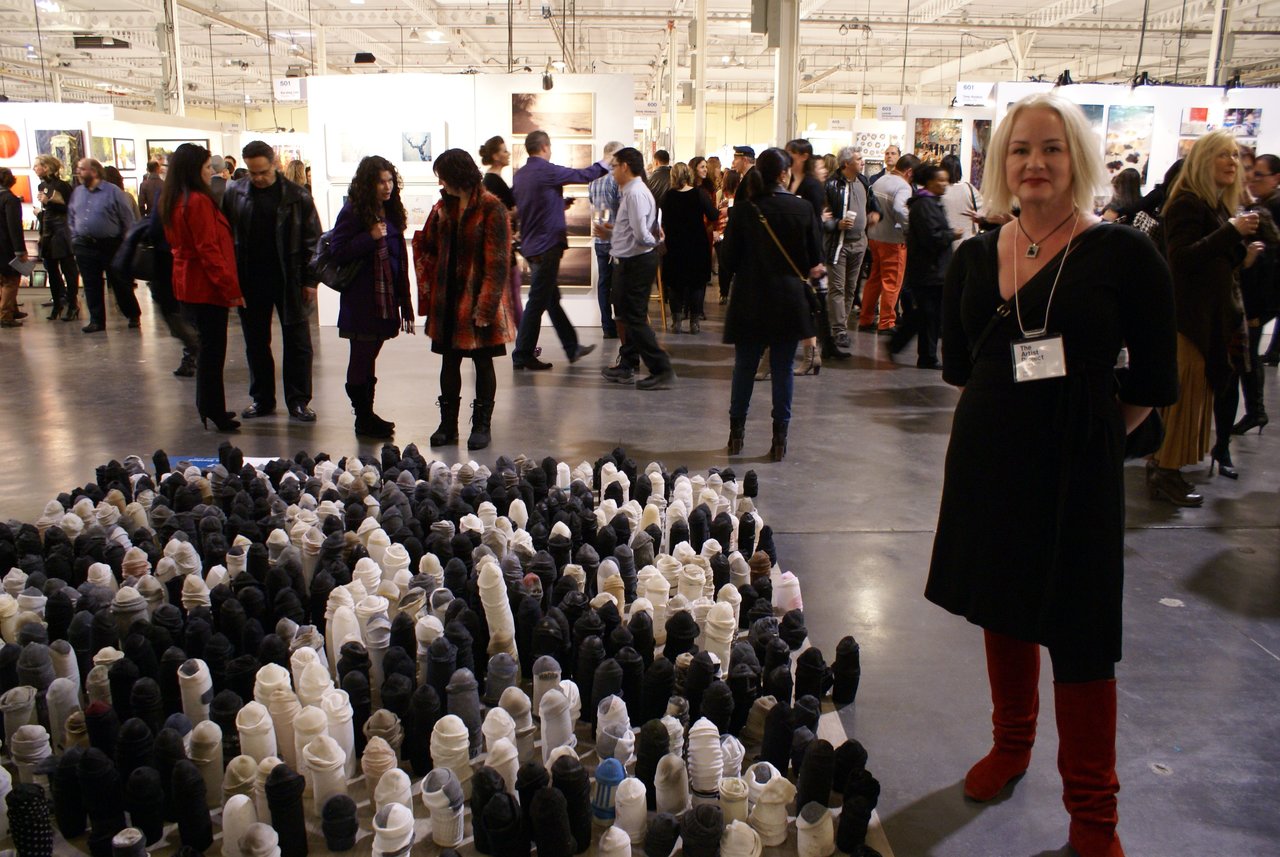 Another work that seemed to constantly gather a crowd was Kim Stanford’s yes I’m trying to pick you up. The mixed media (used socks and glue) installation is what Stanford calls an “absurd investigation into the seemingly insignificant yet pivotal act of picking up other’s discarded socks.” Stanford was happy to speak about her work and enjoyed watching guests interact with her piece (the positive aspect of having the artist present.)

While I fully support The Artist Project’s motives in providing a platform to speak directly with artists, the downsides remain evidently present. The onus falls primarily on the artists themselves but the format of the event begs to question whether the organizers are asking too much of the artists; who are required to represent themselves for four days, answer repeated questions and deal with a wide variety of characters. If The Artist Project teaches these artists anything it is this; get some representation.