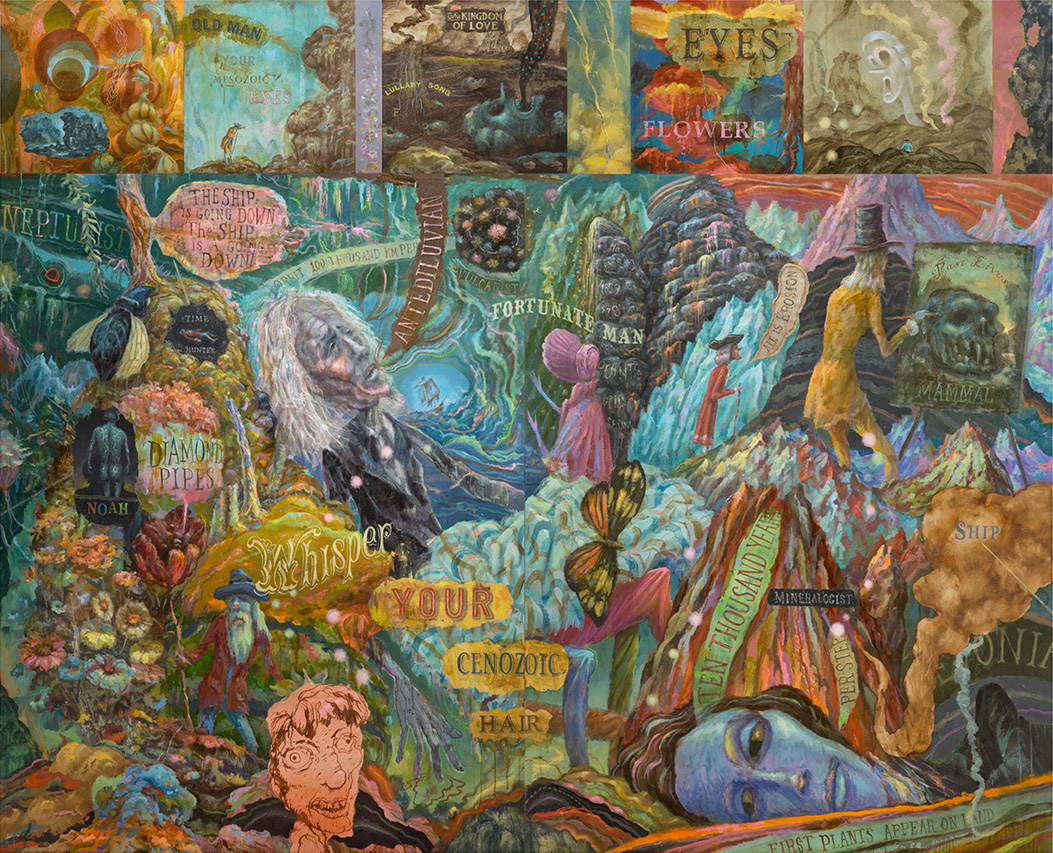 Dan Kennedy, “Erosion of a Mineralogist (Time Hunter)”, oil and acrylic paint on canvas, 104 x 84 inches. Courtesy of the artist.

In Dan Kennedy’s latest endeavor, Erosion of a Mineralogist (Time Hunter), he has created a series of paintings that are clearly inspired by western history’s theory of evolution, mineralogy, and other aspects of science.

A lot of these pieces are eerie underground worlds – which may possibly be mines – painted in colorful, but flat colours. They are filled with wandering characters from the 1700-1800’s, buried skeletons, big heads, ghosts, and more. It’s all very haunting, busy, but at the same time noiseless. Kennedy has added a layer of heavy typography as well, that give allusion to various things, and give a better understanding of each element within the piece. The most prominent allusions to me are Darwin’s theory of evolution of man, and the evolution of plants. There may be some biblical references to add to this topic, with characters such as Noah, and words like “Heaven” and “Kingdom of Love”.

The centerpiece of it all, named after the exhibit itself, is found in the middle of the entire arrangement of the series. Like a few other pieces, it appears to be divided into three parts: below ground, above ground, and the heavens. It is massive, and pulls you in for a while. You might examine it like an unfinished puzzle; there seems to be a set of stories going on that correlate with each other. 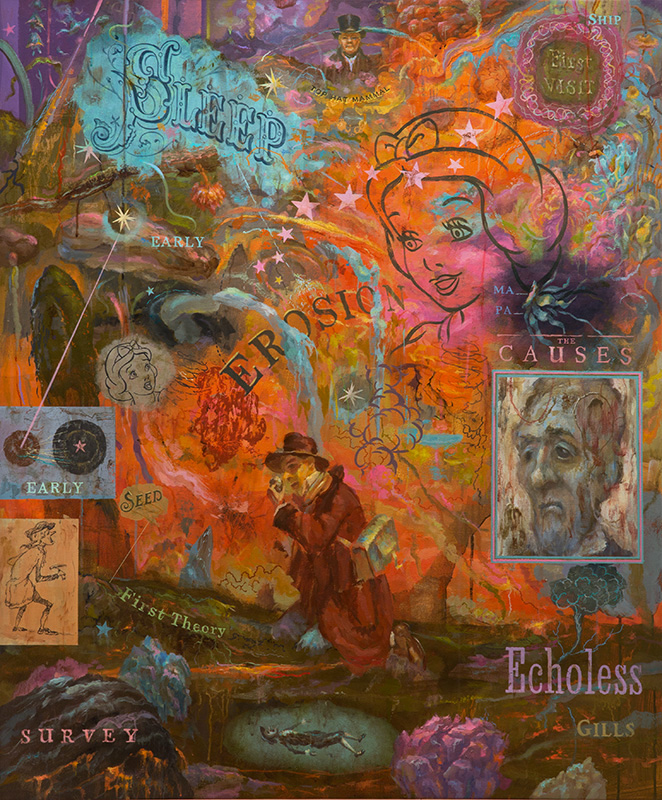 Dan Kennedy, “The Stratigraphy of James H.”, oil and acrylic paint on canvas, 104 x 84 inches. Courtesy of the artist.

There are recurring characters between the pieces, such as Snow White, for instance, and Kennedy’s depiction of Noah. “The Stratigraphy of James H.” has many layers too but not as complicated as the “Erosion of a Mineralogist (Time Hunter)”.  In the underground a skeleton like figure is floating between minerals and the world “SURVEY”. 18th century Mineralogist and Theorist James Hutton kneels in the middle studying a mineral that might give him a “First Theory” as written beside him. Snow White looks over him and a Monopoly like figure poses – as God in the Heavens – in the top of the painting. The surface of the artwork is very busy. There are many words, pictures of minerals, plants, water falls and stars among other things. “SLEEP” and “EROSION” are the two outstanding words, meaning perhaps that erosion happens while you sleep or this whole vision is just a dream involving past and present, reality and illusion. The colors are beautiful and involve a large palette from warm oranges through earth colors to cold blues.

Dan Kennedy’s paintings are intellectually complicated and you can learn a lot just carefully looking at them. The exhibit is intriguing, not only because of the intricacies in each painting, but also because they are visual interpretations of parts of western history – done in an ghostly ethereal way.