While taking in Jennifer Stillwell’s new exhibit at the Pari Nadimi Gallery, the viewer is constantly engaging in a dialogue that makes them question their own sensibilities. The exhibition, titled New Work: Smokestacks, Spills and Figures, is comprised of a series of doors upon which bright paint has been spilled from paint cans that have been attached to them. Some of the doors line the walls of the gallery space, while others lie on the floor in the form of a pile of collapsed dominoes. And, curiously enough, there are also some paint cans without a door, as if the spilled paint is a statement in and of itself. In fact, while this exhibition is certainly playful in some senses, it also puts forth some much more serious implications. We, as the viewer, are then left to make our own decisions on whether we choose to see the lighter or the darker side of things. 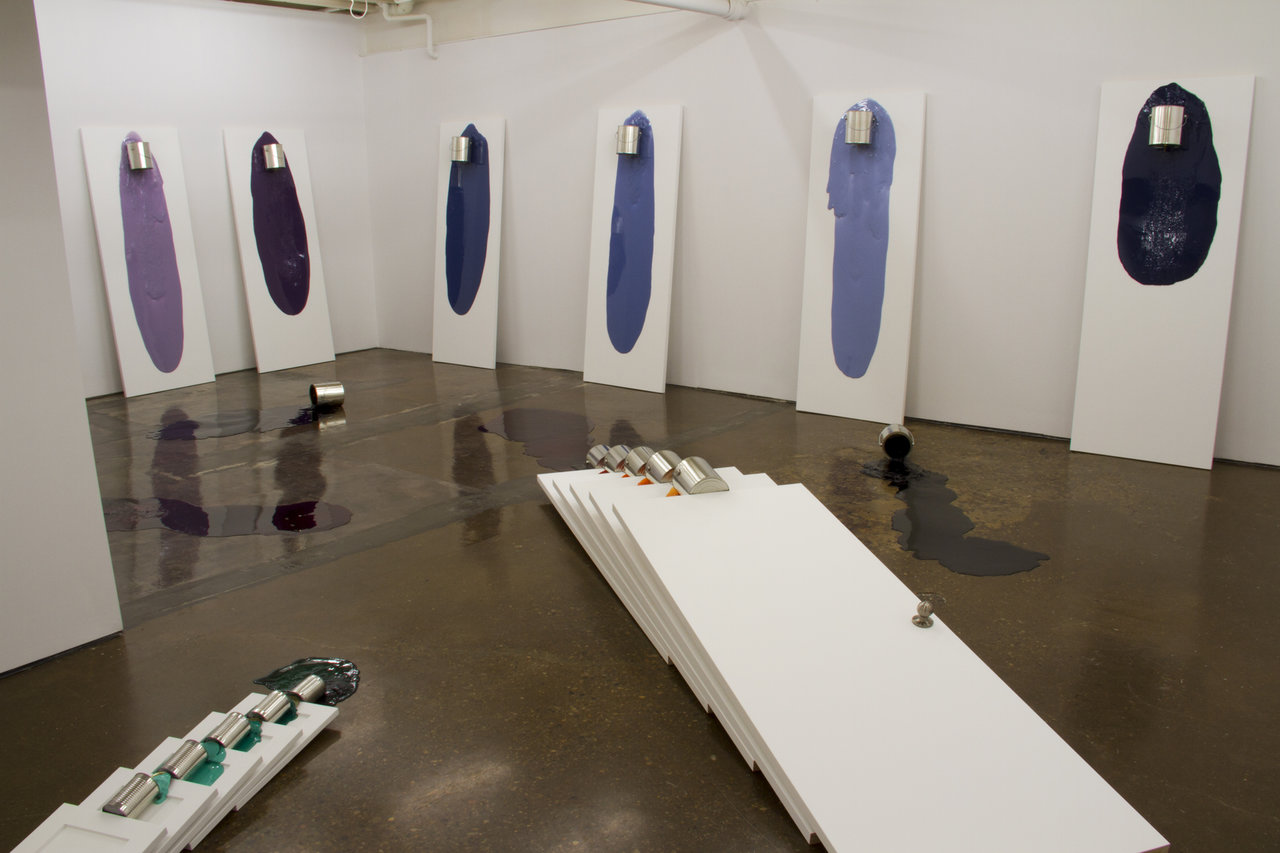 At first glance, it is very evident that this exhibit is one that attempts to reflect on the history of art in a number of ways. When looking at the pieces that are contained within it, a list of past artist’s springs to mind; Duchamp, Pollock and Smithson, amongst a number of others. It is clear that Stillwell is echoing these artists through her use of everyday objects, and also through the use of gravity in her artistic process. Still, she is also subverting these past traditions through the fact that her work remains somewhat light or comical. Perhaps she is also echoing Duchamp through her desire to be somewhat amusing. 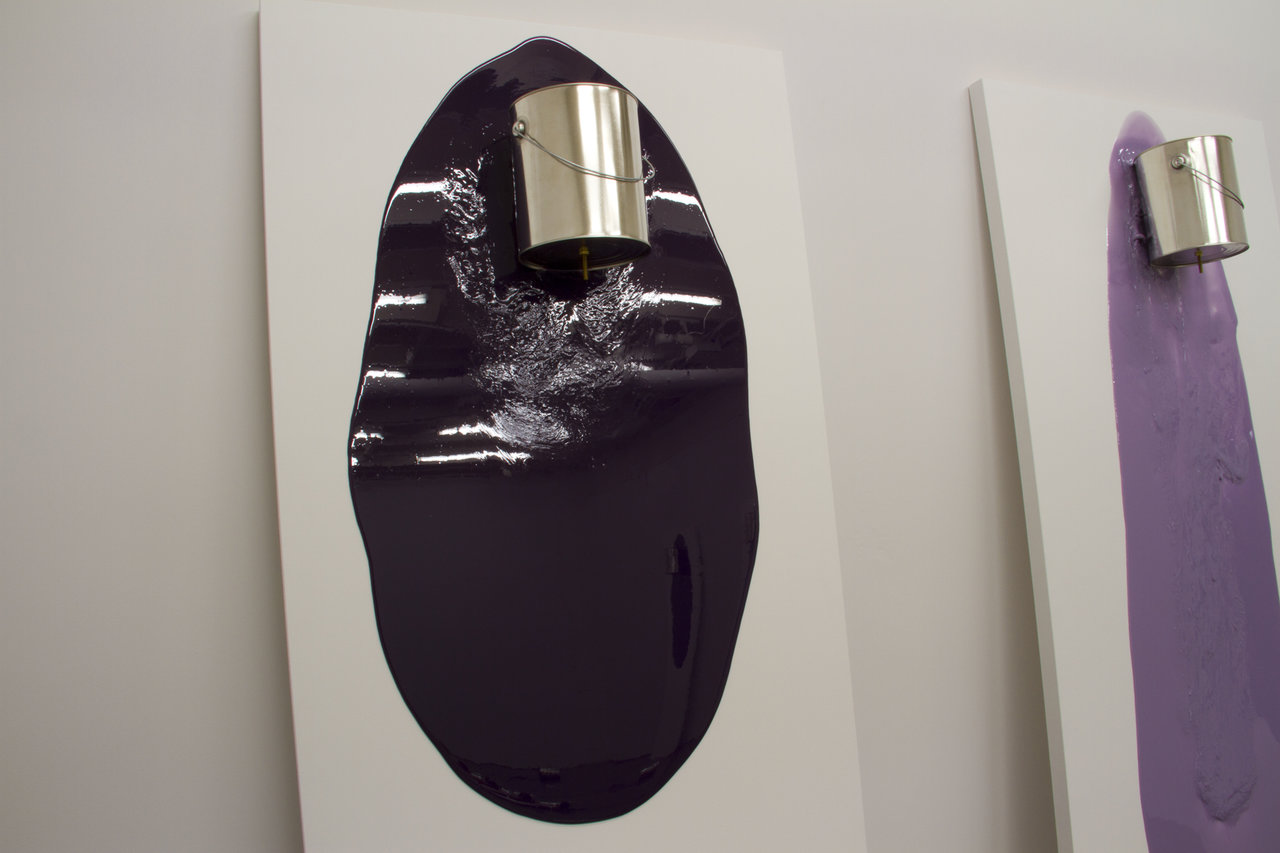 The playful aspect of this exhibition comes from the fact that it is a sort of spin of the age-old prank of putting a paint can or a bucket on top of a door until someone opens it, thus spilling its contents onto themselves. It is also produced by the use of very bright paint, which makes the gallery space look like some kind of funhouse. However, in the works where doors are stacked on top of one another like dominoes, the paint transitions from bright tones at the top to darker shades on the bottom, underlining the transformative nature of temporal progression. Time is quite obviously an important part of this exhibition, as the state in which these doors are suspended allows the viewer to think both of how the process began, and how it might end. As one passes by these doors and paint cans, it is difficult to believe that this is where the process ends. It is almost as if the paint continues to spill and spread as we move around it. 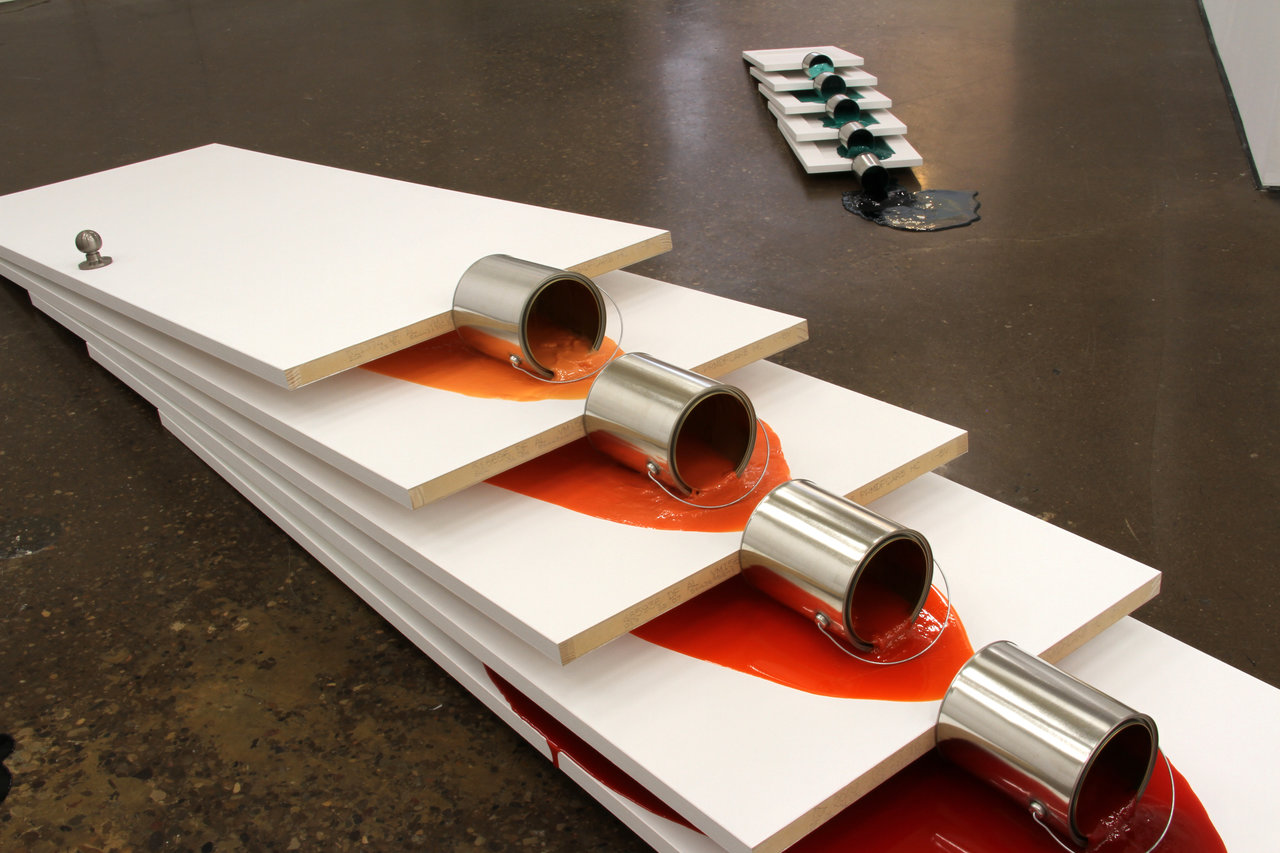 Perspective is in fact a key part of this exhibition. We are evidently supposed to move around these painted sculptures, observing them at various distances and from a variety of angles. The domino-like pieces in particular are the most interesting to look at, as they seem to change form depending on the angle at which they are viewed. When looked at from above, the viewer sees a set of doors that have paint spilled on them. However when the viewer looks at these pieces at eye level with the paint cans facing away from them, then the work begins to look more and more like a smokestack. Therefore, the title of this exhibition is by no means non-representative; as we move around these sculptures and contemplate their meaning, they begin to morph from spills to smokestacks, thus taking away some of the playfulness that they at first exude.

Since this exhibition is based primarily on a prank, we are forced to ask ourselves this question: who is pranking who? Are we as viewers in on the joke, or are we at the butt end of it? When looking at the spills, it is easy to think that they come from a very lighthearted place. However, as they begin to take on the appearance of smokestacks, the works begin to take on a much more sinister tone. Suddenly, it is evident that we are the ones who opened these doors, and that the joke is really on us. By mixing the domestic space with the industrial, Stillwell forces us to question our own implication in the environmental crisis. Even the spill works that are included in the exhibition are eerily reminiscent of the various oil spills that have plagued out oceans for a number of years. Therefore, our engagement with Stillwell’s works ranges from amusing to unnerving, all depending on the perspective that we take. 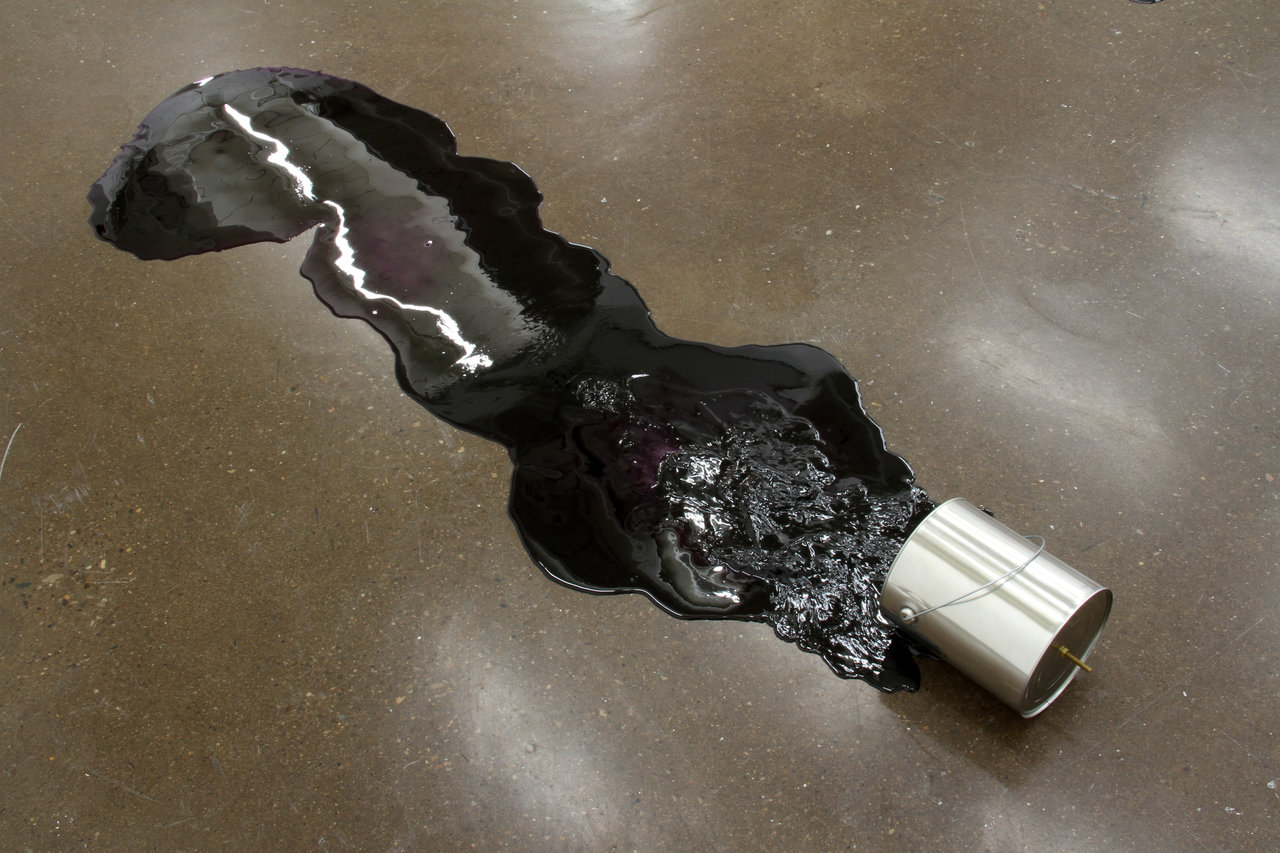 New Work: Smokestacks, Spills and Figures should not be missed by anyone who is interested in process art, or in the ways in which artists attempt to enter into an ecological dialogue with their viewers.