Tony Calzetta’s series, Sophisticated Scribbles and Stories, Grim and Grin is currently on display at the Yumart Gallery. As a trademark, the artist drew a black frame with pastels around the edges of the paper and used bright and flamboyant colors to paint the main theme, creating a visual contrast. This effect constitutes a brisk and lively theme, with added nursery rhymes as titles, reminding us of happy times of our childhood. 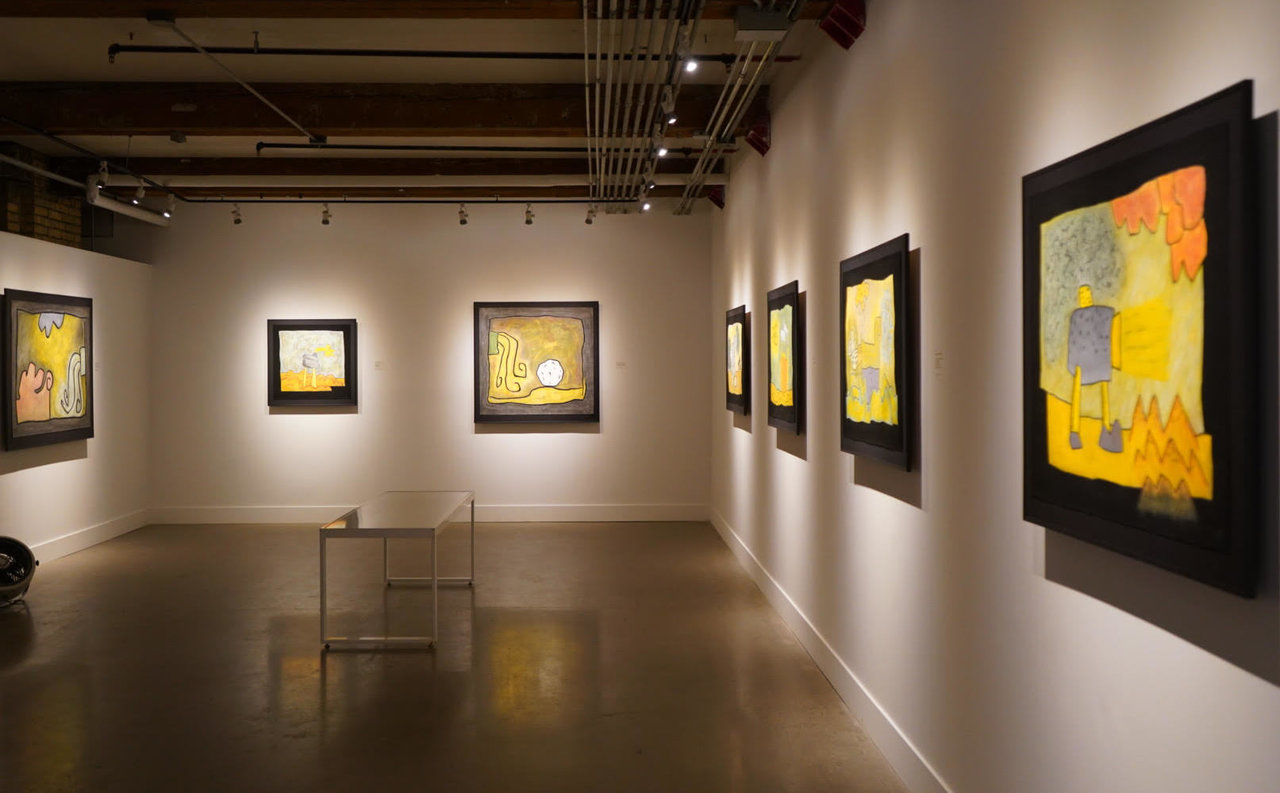 Calzetta’s characters and objects go through a metamorphosis until they become semi-abstract shapes, but their expression remains straightforward and easy to perceive. His works are unique; now it is rare to see artistic styles and approaches as his. Throughout his career Calzetta has been recognized by his cartoon-like style. 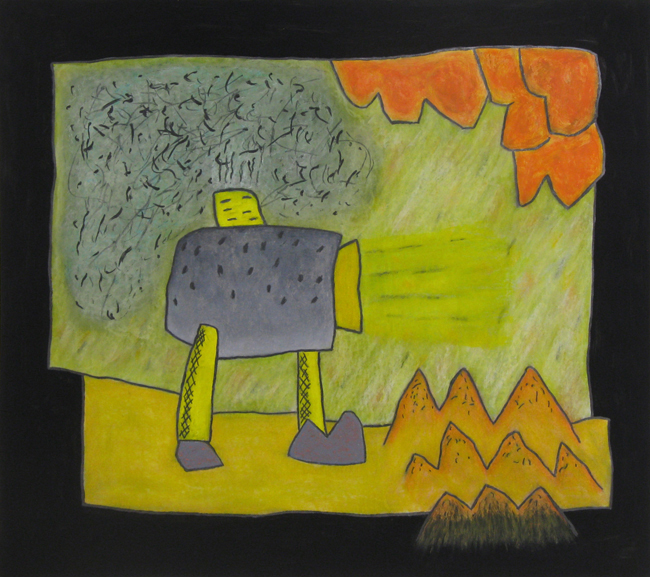 Calzetta titled this exhibition: Sophisticated Scribbles and Stories, Grim and Grin, misleading the viewers who might expect straightforward storytelling, trying to match the titles with the images. However, the artist stated that he did not name his works intentionally; meaning there is no relation between the title and the work. He picked some nursery rhythms and rewrote them into artsy poems, just for the fun of it, like Grim & Grin Story #971: “Little Jack Horner / Sat in a corner / Reading his art mag / And thought / What a drag.” The accompanying painting shows a long-legged figure walking in a landscape of sand dunes, looking down, maybe trying to maneuver his way through them. Maybe ‘drag’ could be used as a connection – intentional or not. 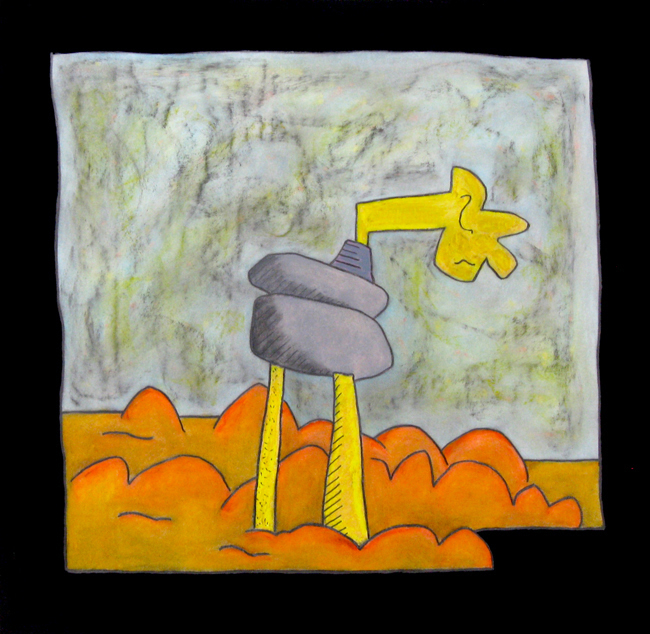 In Calzetta’s works the figures and the machinery he depicts become beautiful and charming, making them popular. Calzetta receives his inspiration from his subconscious and automatic doodling. Later he follows up with drawings based upon what he saw, transferred onto paper and turned into a visual reflection – but all the way he follows the free-flow of his original visions. What are those colorful and fantastical pieces he creates and what are they supposed to mean? Representations of industrial vehicles, animalized with legs and arms, in front of cloudy skies lead us into landscapes we never saw before. Other canvases depict cartoonish figures with body parts borrowed from machines, like chimneys for arms or a muffler for body. 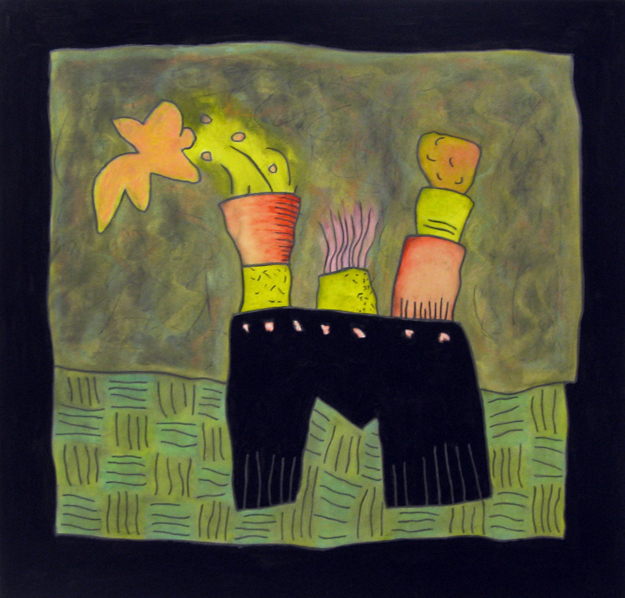 Sometimes they just create a mutant in Calzetta’s fictional world like in Grim & Grin Story #960, where a human figure jumps into deep water, his middle section turns into a muffler, his legs into pipes that breath poisonous gas into the air. Where is the human ends and the machine begins? It also seems odd how happy-looking are these paintings. However, much fog and poisonous gas appears in their surface, the main outcome is still happy and playful – maybe because of the extensive use of oranges and yellows and the simplification of the object into toy-like shapes. 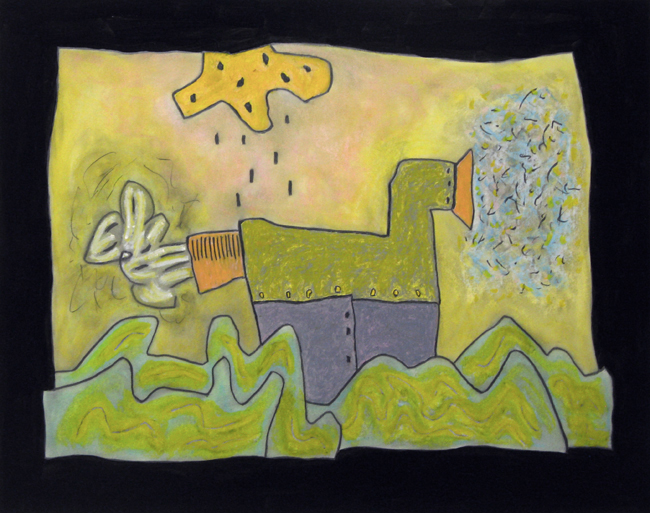 About his artistic method Calzetta stated, that he is ‘Visually ambiguous to perspective and composition as a result of total disinterest to formal rules,’ so his works can be viewed and appreciated as ‘abstract funnies’ or ‘surreal cartoons’. Cartoons and doodling are forms of popular culture that would grasp most people’s attention, sometimes even more than traditional art forms. Indeed, I did not see much traditional craftsmanship in his work, but a rather great creativity and playfulness.