Can art be effective as political action? It’s a long contested question that defies a definite answer, but some art just beg to be viewed through a political lens. Such are the works in Beat Nation, a touring exhibition organized by the Vancouver Art Gallery and co-curated by Kathleen Ritter and Tania Willard. Beat Nation first took form in 2008 as an online initiative produced by Glenn Alteen of Grunt Galley, an artist-run centre in Vancouver. Co-curated by Tania Willard and Skeena Reece, the website provided a virtual platform for creative expression and activism to Aboriginal artists and musicians influenced by hip hop culture. 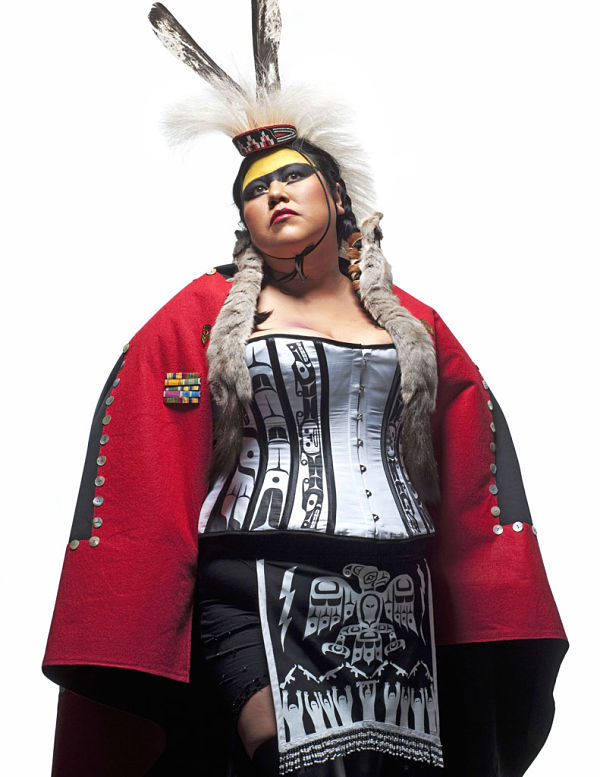 Toronto currently has its turn of Beat Nation, which opened at The Power Plant on December 15th, 2012 and stays until May 5th, 2013. The exhibition features over twenty artists from various corners of North America working across a range of media, from painting to performance and sculpture to sound. Despite the diversity in geography and artistic practice among the participants, the works on show find a common point of departure in the exploration of individual and cultural identities arising from the intersection of Aboriginal and urban youth culture. 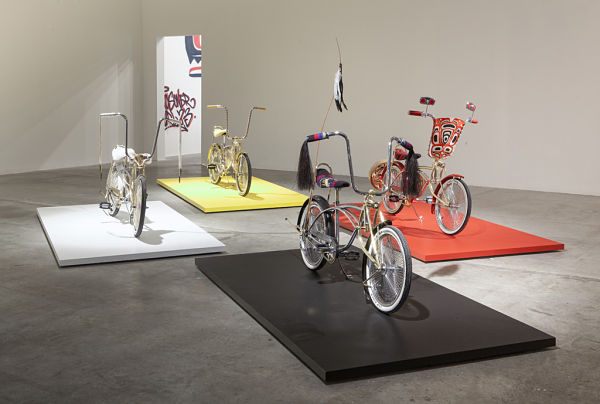 For the show’s organizers, the engagement of Aboriginal youth communities with hip pop culture is not an instance of insidious assimilation into mainstream culture. On Beat Nation’s website, Alteen explained that “these artists are not turning away from the traditions as much as searching for new ways into them.” The hip hop subculture had been a vehicle for expression and resistance for disenfranchised urban youth since its origin in Black neighbourhoods of New York City in the early 1970s. This alternative culture, generally involving rapping, DJing, break dancing, and graffiti, soon spread into towns and cities across the continent and beyond. But most remarkably, it soon permeated racial, ethnic, and class borders, reaching and being adopted by youth demographics outside those of its originators. Since the early 1990s, Aboriginal youth have likewise harnessed the subversive potentials of hip hop as a means to alternative cultural production, self-definition, and meaning-making. 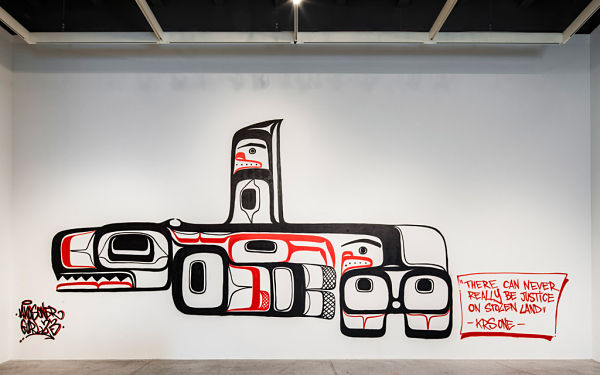 In an unexpected meeting of traditional Haida formline, spray paint, and the white gallery wall, the graffiti mural of Corey Bulpitt and Gurl 23 is a striking product of cultural convergence. Titled Raven Finn Whale (2012) and created specially for this exhibition, the work features a red and black spray-painted raven inside the body of a whale, an element drawn from Haida mythology. Lyrics from a KRS-One song written on the lower corner of the mural resonate powerfully: “There is no real justice on stolen land.” More than just a formal juxtaposition of Aboriginal and hip hop cultures, this work thus connects the fight for indigenous land rights to the subversive power of graffiti in reclaiming space and resisting social control. Feminist artist and scholar Allyson Mitchell wrote that graffiti practice “makes visible the invisible on the very bricks and mortar owned by those in power.” This spirit of resistance is the substance of Cheryl L’Hirondelle’s land art piece, uronndnland (2004). The artist arranged rocks on the shoulder of the TransCanada highway where it runs through the Stoney Point Reserve, spelling out in Cree what translates to “look at this left over strip of land.” Presented in the exhibition through photo documentation, this work is a way of “tagging” the landscape to visibly protest the usurping and adulteration of reserve lands. 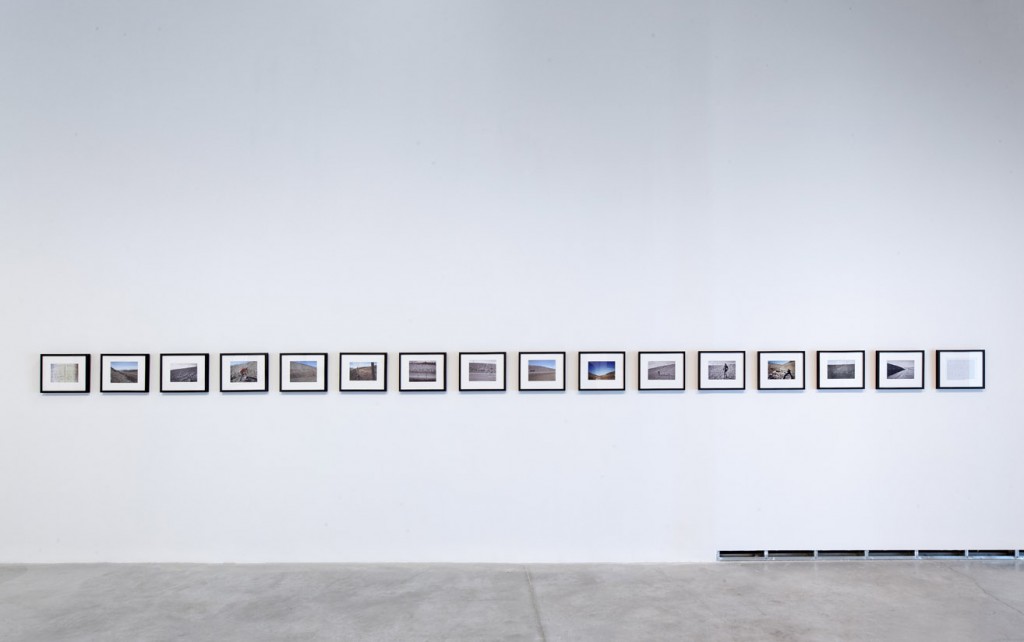 Another highlight of the extensive exhibition took place in a dark, immersive gallery space that played video works by Jackson 2bears, Bear Witness, and Geronimo Inutiq on rotation. Bear Witness’ video Electric Pow Wow Drum (2010) weaves a narrative out of appropriated images from Hollywood films, set to a charged soundtrack by DJ Shub that remixes traditional Pow Wow music with contemporary club sounds. The multimedia artist addresses the power of representation in shaping the popular consciousness, employing this to his own ends by reclaiming and recontextualizing derogatory representations toward the telling of his own creative narrative. Jackson 2bears’ Heritage Mythologies (2012) is a trenchant video work that also plays with appropriation. Comprised of sampled footages from popular media and newscasts, this visually engrossing piece exposes the one-dimensional and often discriminatory popular (mis)representations of indigenous peoples. 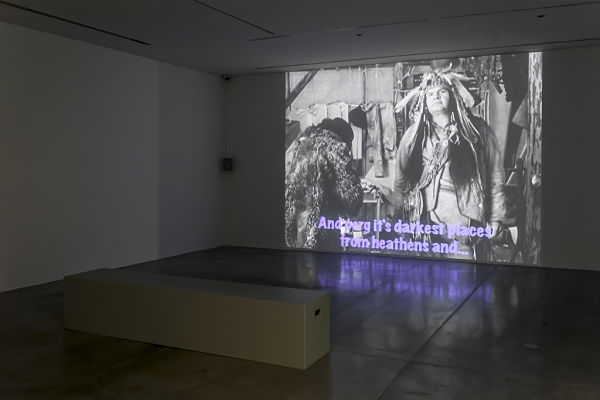 Reflecting on mythologies, Roland Barthes wrote that myths rid things of complexity and dialectics, efficiently organizing a world purged of depth and history. These video installations and many other works in the exhibition put up a daring fight against oppressive mythologies by bringing suppressed histories and identities back to the surface. Sonny Assu’s Elipsis (2012) is comprised of 67 copper vinyl records, one for each year the potlatch had been banned in Canada. These “records” of history are arranged in an inverted equalizer pattern, alluding to the repressed histories of injustices against Aboriginal peoples. Likewise, the title word “ellipsis” underscores the notion of omission. 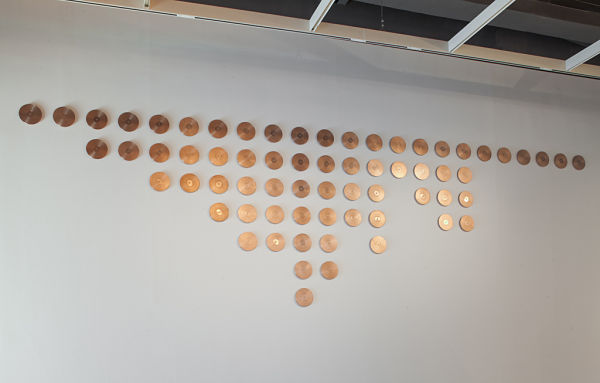 The participants in Beat Nation are filling in this omission with their art, replacing the ellipsis with the expression of their own histories and identities. In navigating the world of today within the purview of their rich traditions, the artists’ encounters with hip hop and youth culture have begotten new and unique modes of expression. Fluidly moving between graffiti and beading, rap and Pow Wow music, these contemporary Aboriginal artists continue to share stories new and old. The spirit of endurance and resistance that comes across in their art tells me they are far from beat.