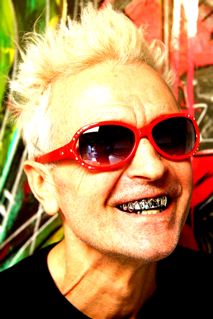 I came into the Drake Hotel coffee shop a couple of weeks ago and there was anarchist-wildman-artist Istvan Kantor at a window table in the sunlight and when he smiled a greeting—for we hadn’t seen one another for a couple of years—there was suddenly a visionary gleam in the coffee shop, an effluence of light that made looking at him feel like looking directly at the grille of a 1948 Buick.

The light came from his teeth, from the radiance generated by his teeth (the way the moon glows brightly from cold, reflected light) which, when he smiled, knocked you off your feet.

Bridgework. Bulwarks. Choppers. A fortified garrison. That tall murderous dude with the killer teeth (what was his name? Jaws?) in the old James Bond film, From Russia with Love.

For someone like me whose teeth are always in open revolt, for someone like me with anarchic teeth, it’s not hard to identify with Istvan who, when he came to the great dental fulcrum, where Healthy Teeth Past meet Fugitive Teeth Future, took a third route—always the artist’s prerogative—and headed out into the territory of prosthetic teeth (O brave new world, that hath such dentures in it!!), acquiring, not just like anyone (Istvan is never just like anyone), a whole new tenancy, a whole fiefdom, a reinvented and expanded cavity (the mystic cave of the mouth, each man us own Venusburg) containing an array of space-age teeth, of inter-galactic choppers.

His teeth are made of cobalt-chrome, a metal he assures me, in a subsequent chat on the phone, is “the metal most used in high technology.” We get down to the dental nitty-gritty: when did the implanting start? A year ago. How long was the procedure, from start to finish (teeth extracted, no teeth left, an oral cavity)? A year. Healing? “Implants—one by one—take up to four months to heal.” Maintenance? Brushing as usual. And then, in addition, a special sort of cleaning (I didn’t hear the details). Exhaustion. Ah, the burdens and joys of Metallica Exhilaration? Sure. Let a broad, welcoming smile (like the one I got at The Drake’s coffee shop) be the rising curtain on your spotlit drama. Let your mouth be the site of the jeweled self. Open your mouth and let the sun shine out. Be your own bracelet, your own fallen halo.

And besides, Istvan explains, he uses his mineralized mouth as an adjunct to his work, a built-in tool.
The day after we last talked, he was flying off to Poland, to set up a series of exhibitions of his work and to conduct an array of performances in major Polish cities (Warsaw, Krakow, Wroclaw, etc.). “I sometimes use a metal detector,” he says, “and when I bring it near my mouth, the agitation, the response caused by my cobalt-chrome teeth, throws patterns on video screens and subsequently contributes to my composing of songs.” He grins his metallurgical smile:

But The Invisible Smile title works as well, because the epic teeth really are, in a sense, invisible since their metallism is so solid (heavy metal!) that they dissolve in their own light. “What big loud teeth you have, Grandma Kantor!” “The better to gnash with, my dear!” says the Dental Wolfman, “the better to lash out and tear out and grab at the neck of the passing (oh so deplorable!) scene! Shadow of The Great Masticator!
Do we require Istvan Kantor’s pre-dental history here? The early life in Budapest. The convulsive, obscurantist joys of Neoism; the Blood-X rituals, the maniacal singing, the impolite, insistent escortings from museums with which he has (by his mere presence there) grappled, the wild disruptions of cultural complacency, the vast ongoing collage of life itself, endlessly rejigged and thrown back out onto the smooth waters of the status quo, it’s recorded everywhere, and nowhere more fully than on his website, IstvanKantor.com. Go there and keep your dukes up and your powder dry and your teeth brushed and your eyes on the road…because it’s a rough highway of acidic, slambang colour and angular forms, of raw and cooked, tart and sweetened noise, of whitehot anger and benign laughter, born more or less (not to discount Istvan’s inherent, biological anarchism) from the Hungarian Revolution of 1956 and widening out over afterwards like a boulder dropped into a pool—to embrace Istvan’s entire existence, and scream it throughout all of the world he touches (gleaming teeth gnashing—as Jack Kerouac once wrote—“everywhere in consciousness”).

You have teeth like these and, well, you don’t even needs arms, you just bite into everything you want, like a giant revolutionary piranha fish.

But all this is merely a note on Istvan’s brilliant teeth, nothing more. It is the prose sediment, dental ecriture, the writerly fallout, from that certain mineralogical grin the boy flashed (like a flashlight in a dark basement, during a power failure) upon me in the Drake Hotel Coffee shop a few weeks ago…and I’m saying to myself, right then and there, well, I want to write something about those prodigious teeth. And now Istvan is biting off great chunks of an expectant Poland and I’m just finishing this. Not every chopper, I’m thinking, is a motorcycle.