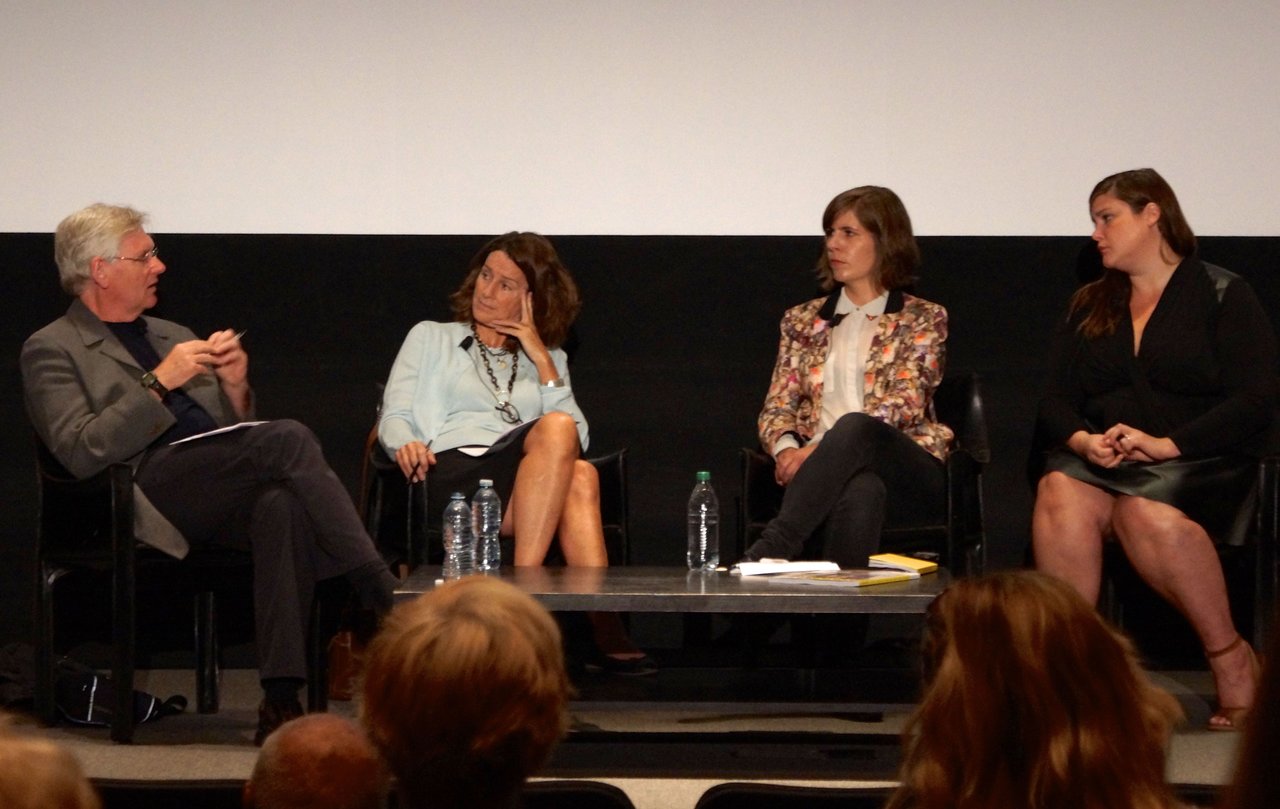 Gallery Hop Toronto began with a panel conversation composed of Sarah Milroy, Sky Goodden and Gabrielle Moser. Richard Rhodes, editor of Canadian Art, served as moderator, though he acted more as a fourth member of the roundtable discussion. After each speaker made opening written remarks (fitting, for a panel of art writers) the most insightful moments of the talk arose out of spontaneity. Talking points included the lack of funds devoted to art writers, the difficulties facing young critics today and how the tendency for those in art writing to wear many hats in the art world has lead to a frightened, less offensive brand of art criticism. The panel discussion was livestreamed online and will be made available for viewing at canadianart.ca/writingpanel after September 25.

This tour – although hardly Junction and only marginally Bloor West – attracted a large crowd of art-lovers, perhaps too numerous for the intended itinerary. Surely, the opportunity to meet curators heightens the quality of a gallery visit, just as the buzz of a large crowd suffuses the event with importance. 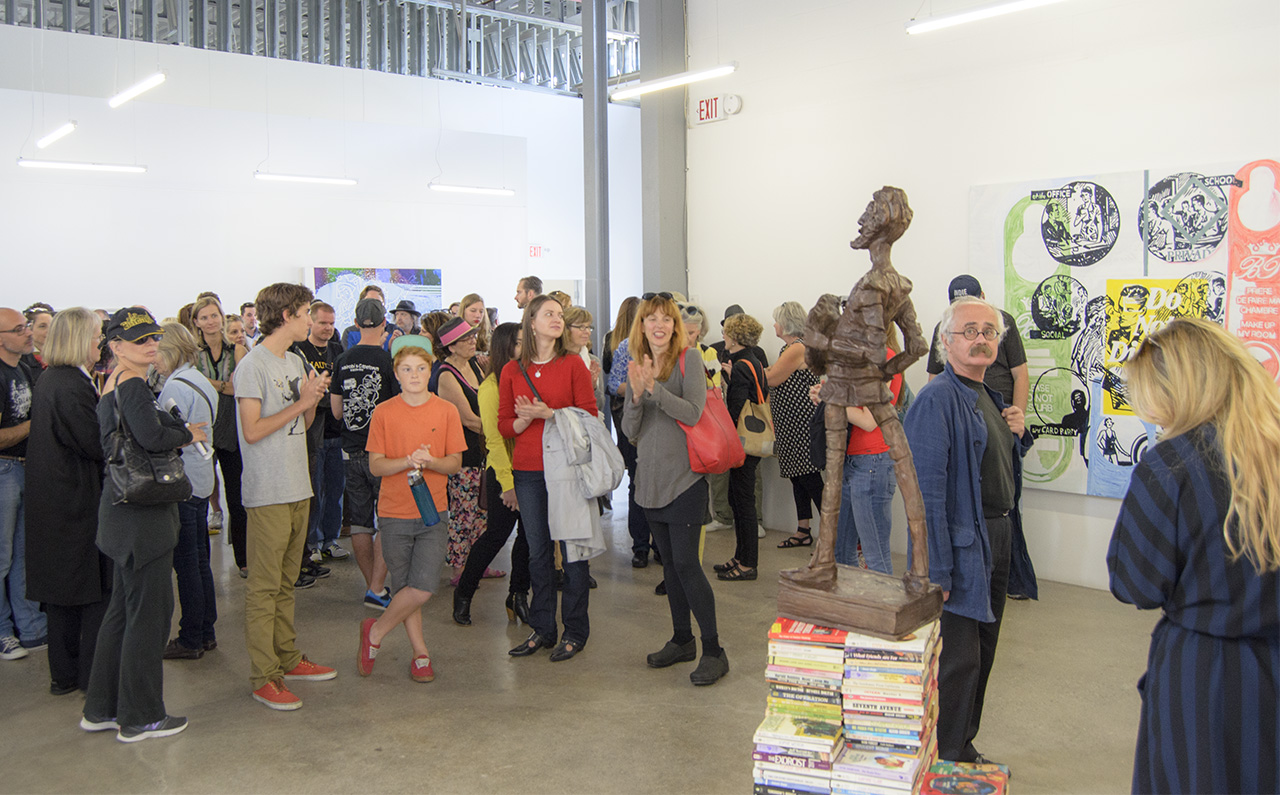 However, the appreciation of art itself should stay the main focus – which, of the five venues, was virtually impossible in the three which exhibited video work. While it is understandable that close proximity with TIFF skewed the choice toward that medium, it remains a surprising and questionable decision both in terms of representation of the Toronto art scene and in terms of quality of the tour as a whole. The intimate space intended for viewing Laurent Montaron’s beautiful short film at Mercer Union but the gallery’s viewing room could at most accommodate a dozen spectators; while the pace of the visit could not permit beholding the videos of Lynn  Marsh at Scrap Metal and Mark Lewis at Daniel Faria galleries for their entire duration. An image might be worth a thousand words, but no speech of a curator can replace a proper viewing experience. At least, Clint Roenisch and Division galleries left a more lasting impression with works by Jason de Haan and Graham Gillmore respectively. 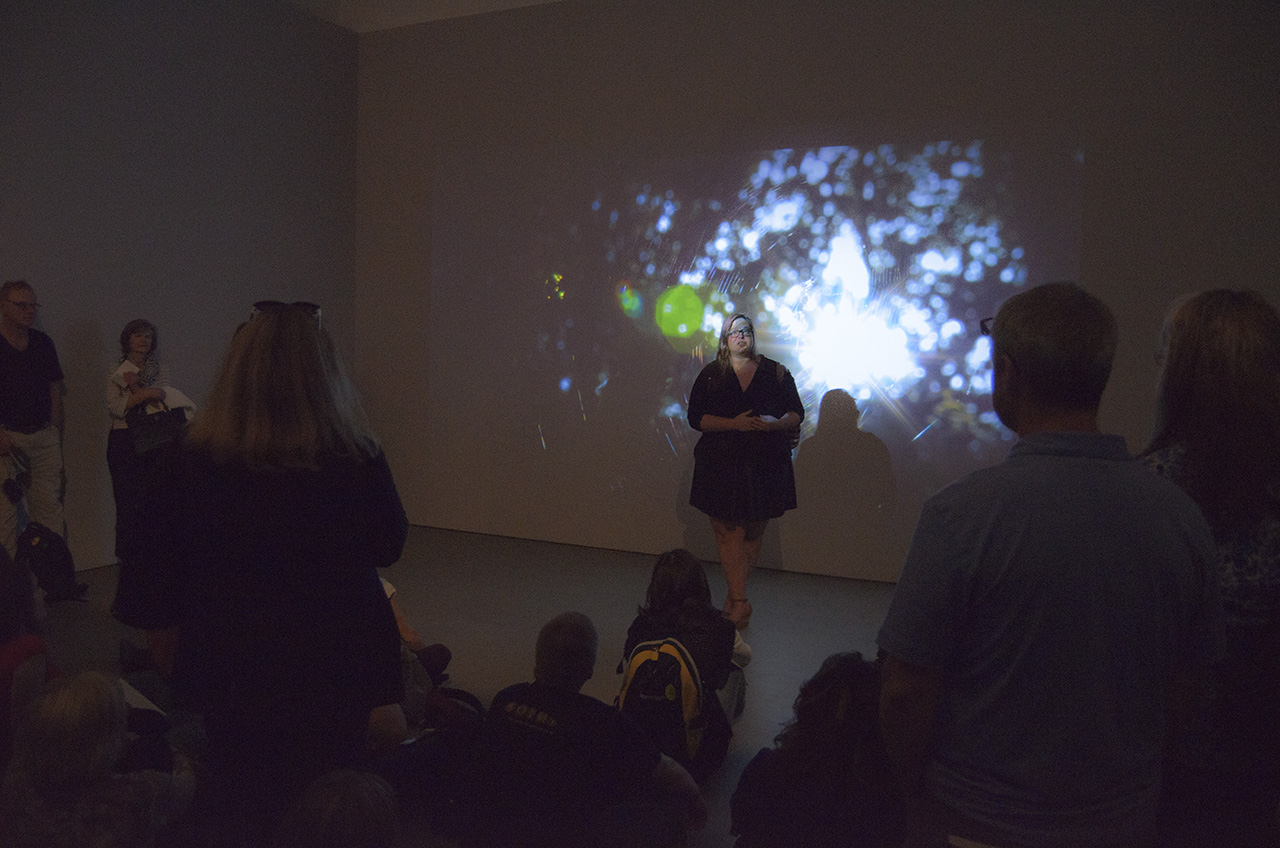 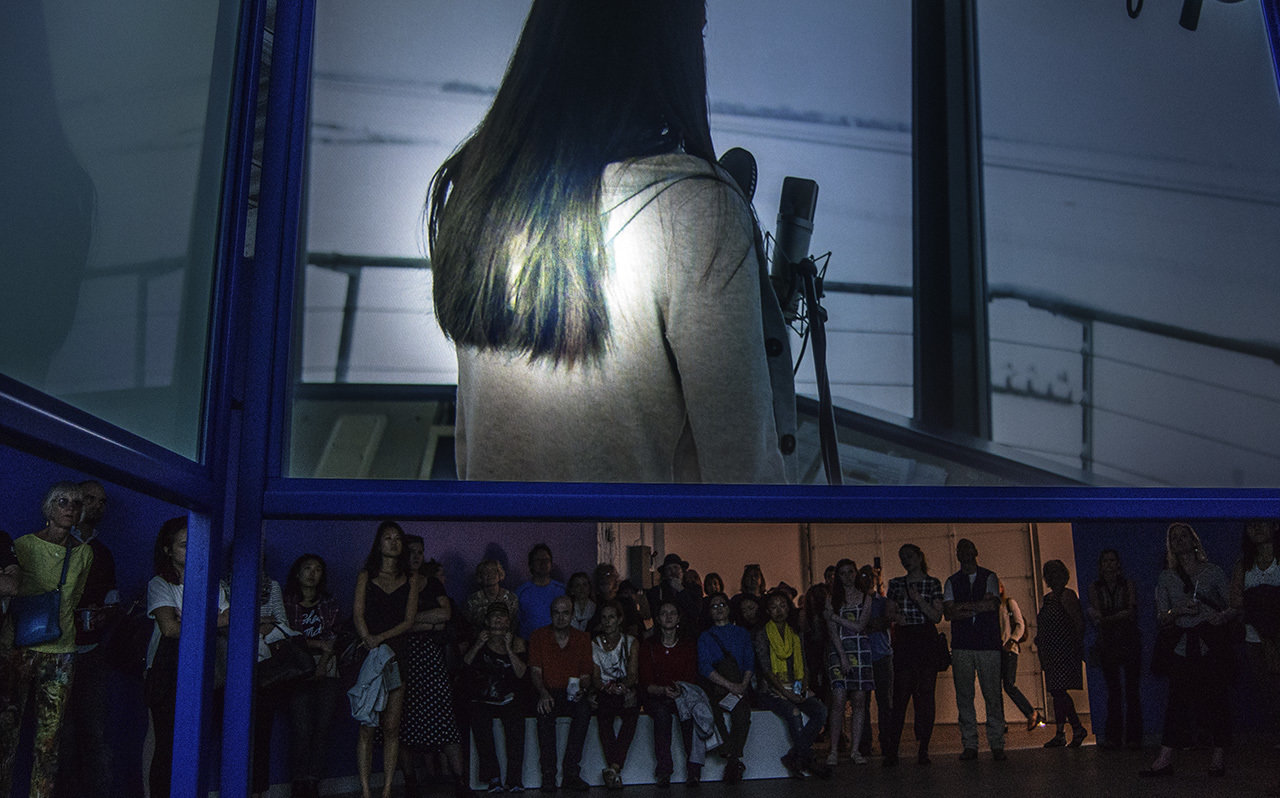 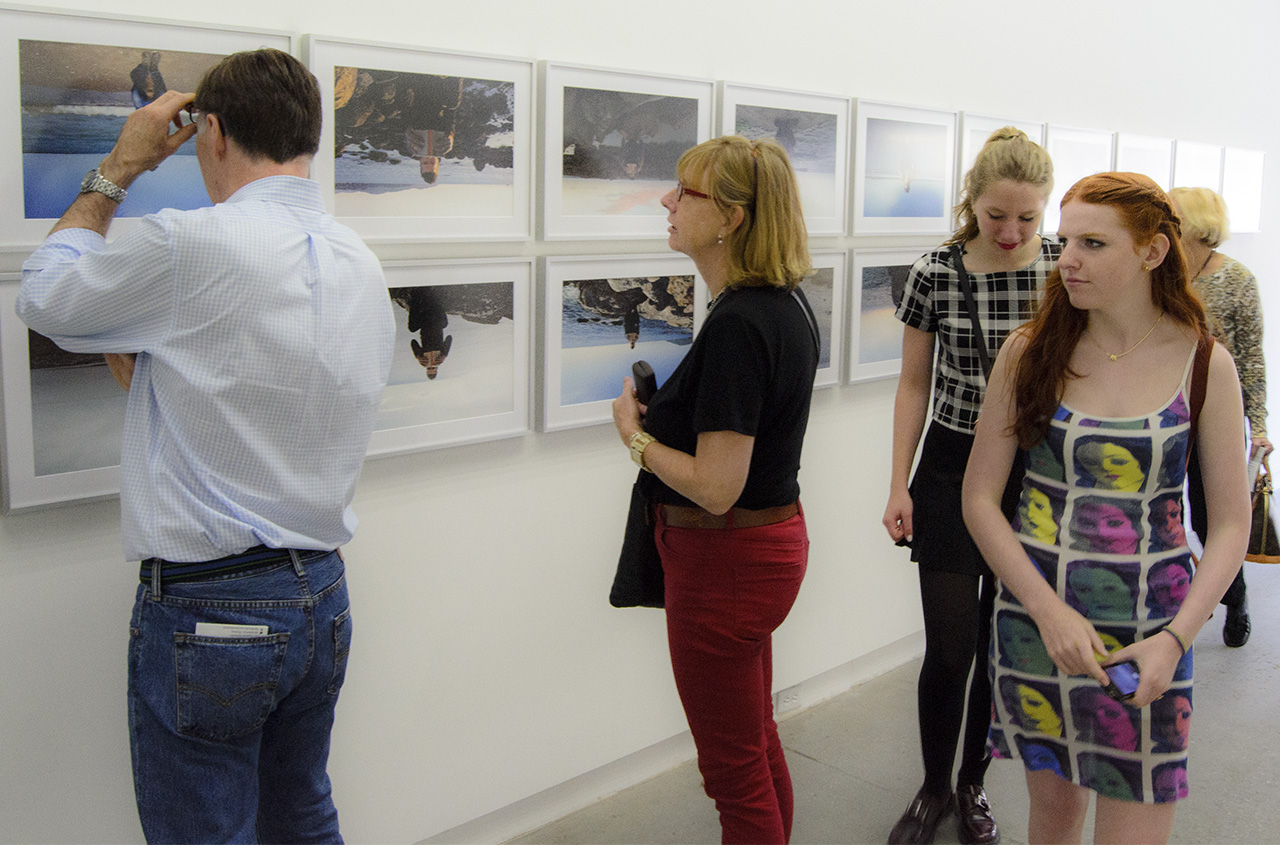 It was a beautiful day for a tour along Dundas West this Saturday. It was led by curator Stefan Hancherow, and started at PM Gallery, that is celebrating its 10th anniversary this year with a show called Forward Thinking, featuring 12 artists who have reached a point in their career where they’ve decided to embark on a new path. Crystal Wagner pieces look like water-dragons dancing in and out of the sea.

ESP, a gallery that predominantly showing works from female Canadian artists. They host one new show a month, and this one was a preview of FEATURE art fair. Then we went to MKG127,  featuring work by Gwen Macgregor, who was present to talk to us. The most intriguing of her pieces was a series of stills of a woman she videotaped every morning, pushing a heavy cart up a hill.

In Loop gallery, John Abrams and Candida Girling were present to discuss the concepts behind their exhibits. Abrams, who has been sourcing film for four years, was inspired by Jean Luc Godard’s 1960 film Breathless, featuring Jean Seberg, whom he depicted in 20 different portraits of black and white oil paintings. Candida Girling’s exhibit A City of Sky: An Urban Intervention, is a series of interactive vertical landscapes that re-imagine greenery in the urban landscape. 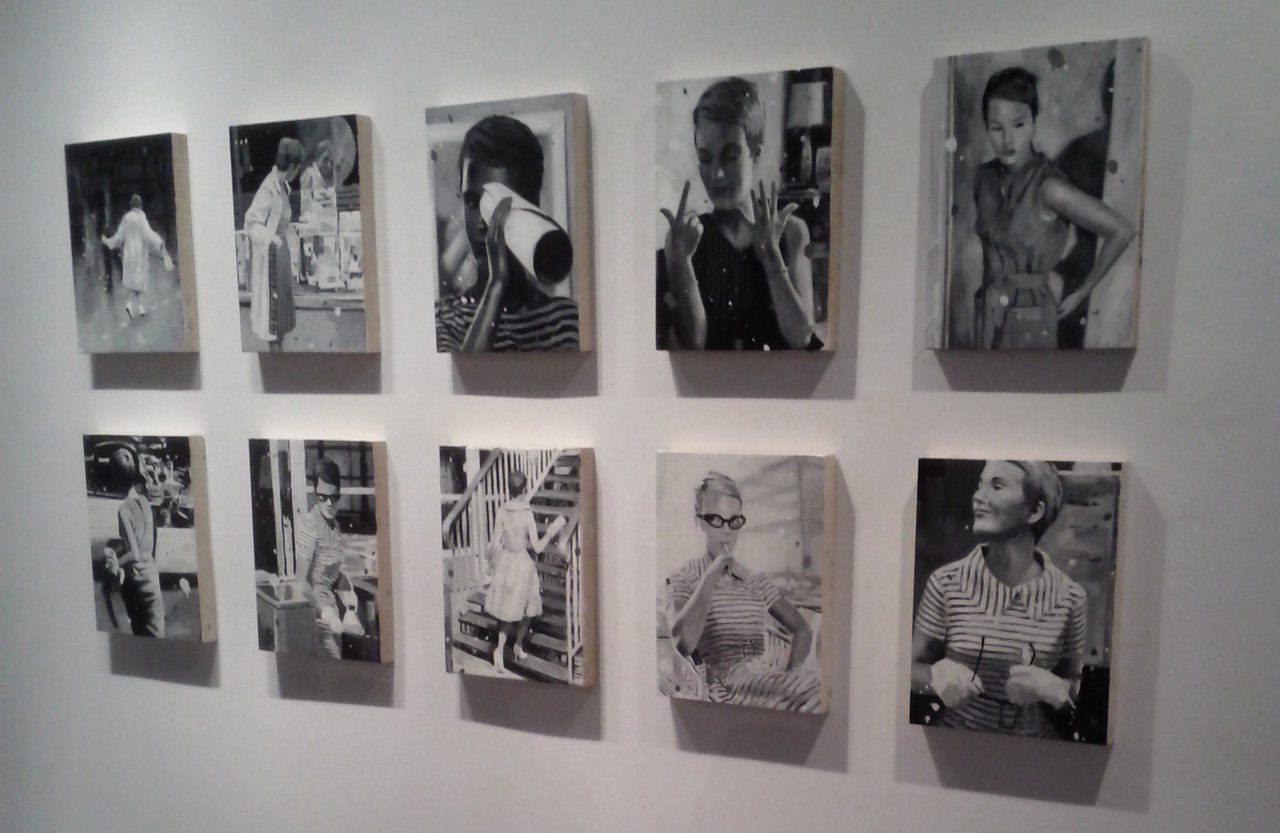 Paintings of Jean Seberg by John Abrams at loop gallery. 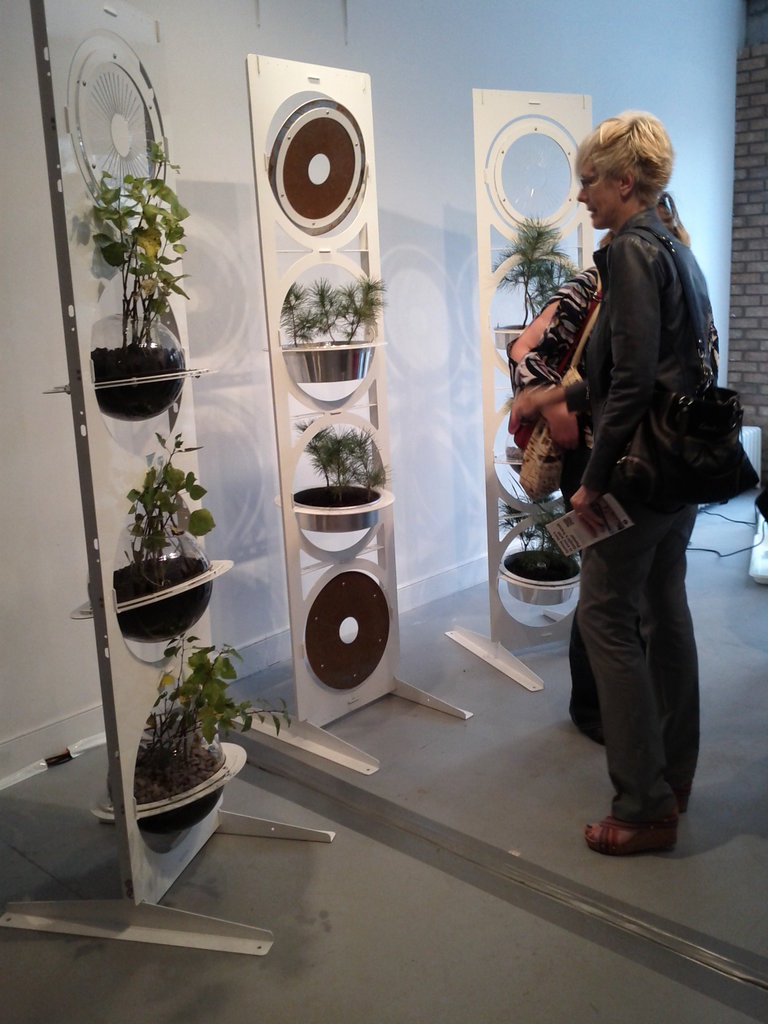 Candida Girling’s exhibition, A City of Sky: An Urban Intervention, at loop gallery.

The young artist Nicholas Di Genova was exhibiting his work inspired by stop motion in LE Gallery. Di Genova is currently exploring new mediums of art, and his playful style is heavily inspired by zoology, mutation, evolution, manga, anime, as well as childhood hobbies such as model airplanes, Dungeons & Dragons, and war hammers. 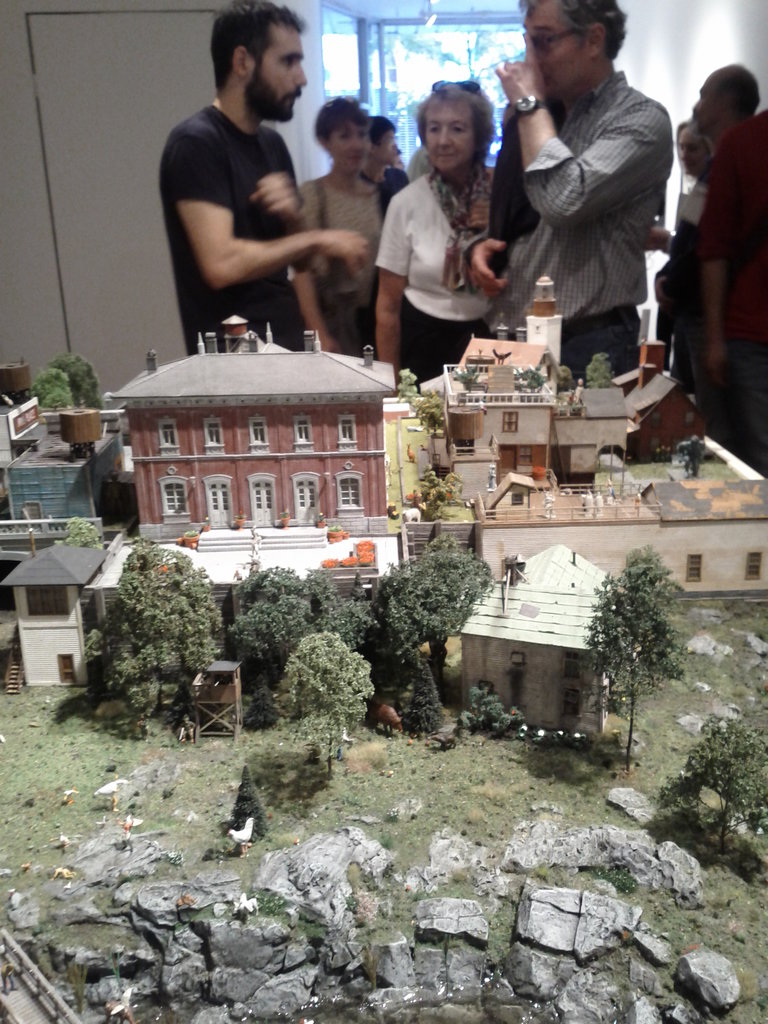 The last stop was Cooper Cole Gallery displaying work from Georgia Dickie and John Riepenhoff. Dickie likes to deal with the temporal aspects of the nature of materials and thus created sculptures held together by balance, while Riepenhoff focuses on the relationships people have with gallery experiences, so he created a box that houses small works from different artists – a gallery within a gallery. 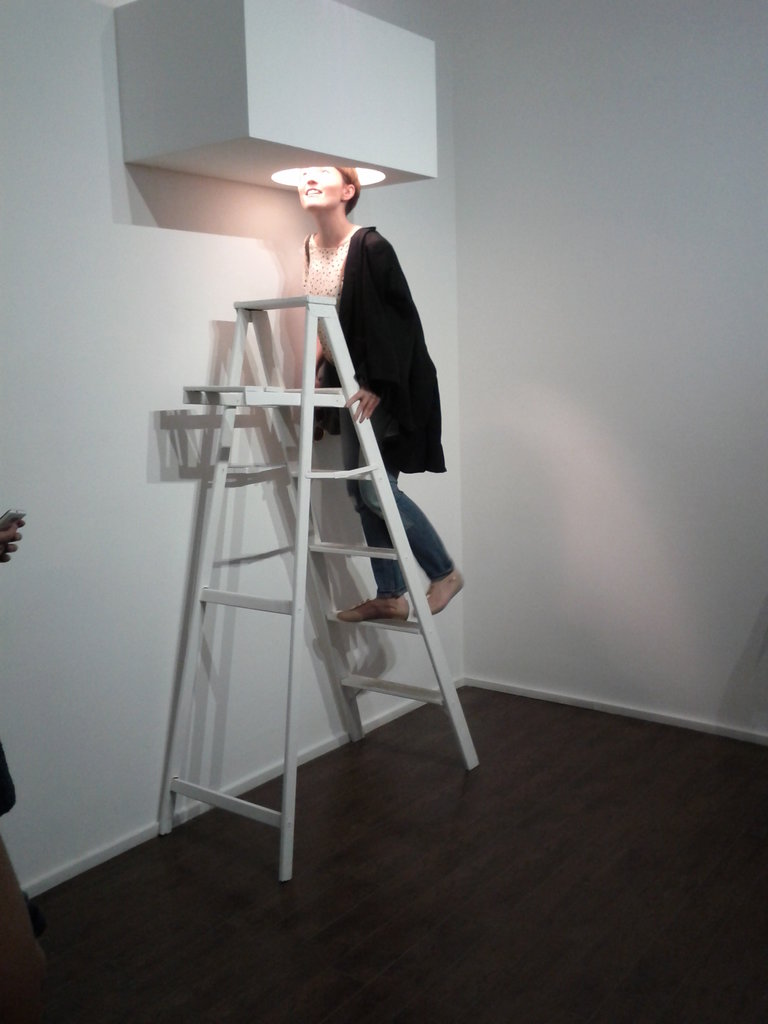 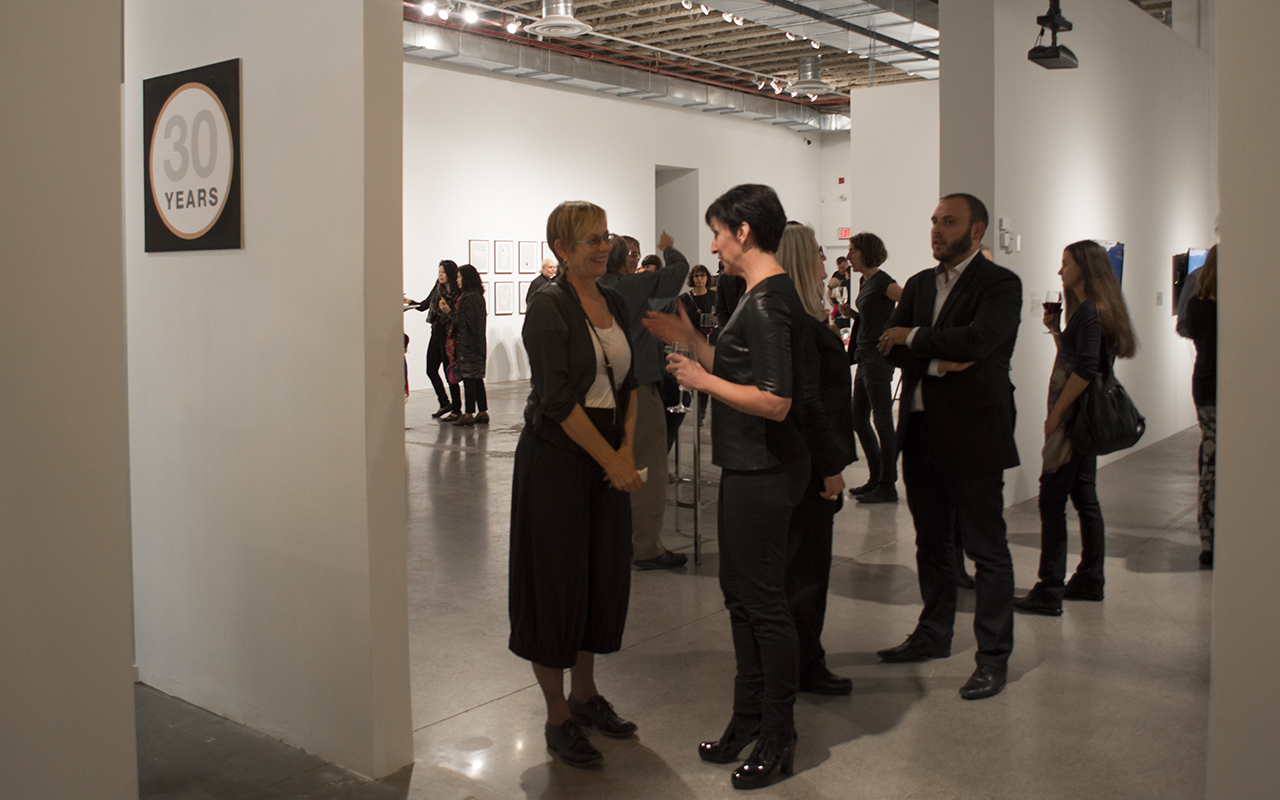 Guests at MOCCA, celebrating the 30th Anniversary of CanadianArt Magazine.

“Our role really is to try and bring the best of Canadian art to Canada and to the world.” Says Jill Birch, CanadianArt’s Chief Executive Officer. The Thirtieth anniversary celebration for CanadianArt magazine was hosted at the Museum of Contemporary Canadian Art, where the current exhibition TBD is on view. 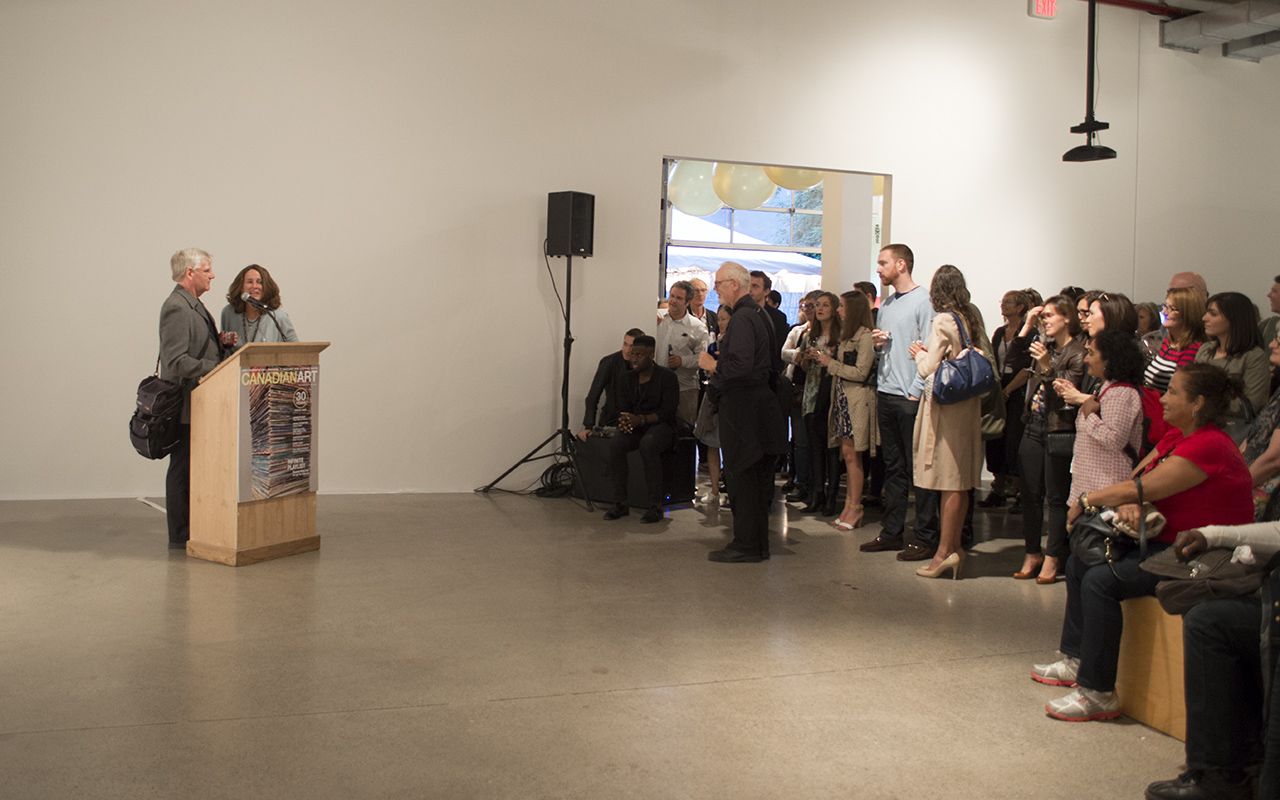 After brief talks by editors Richard Rhodes and Sarah Milroy, the event kicked off to a joyous celebration of the magazine’s thirty years of production. The crowd, composed of students, artists, journalists, art viewers, and briefly, famed architect, Eb Zeidler, spent the next few hours not only discussing the museum’s display, but the success of both CanadianArt and Canadian art. With closing remarks, Richard Rhodes confidently and happily claimed that the publication will be around for at least another thirty years. 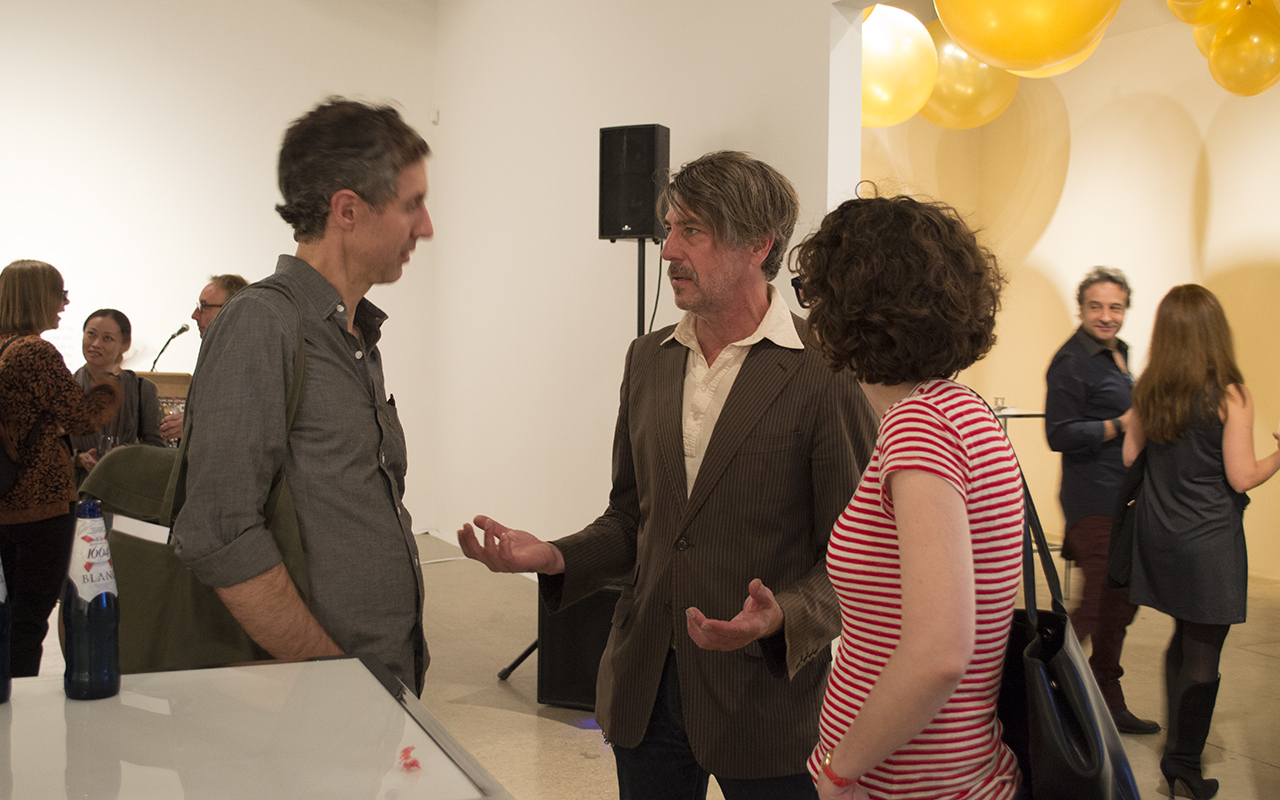 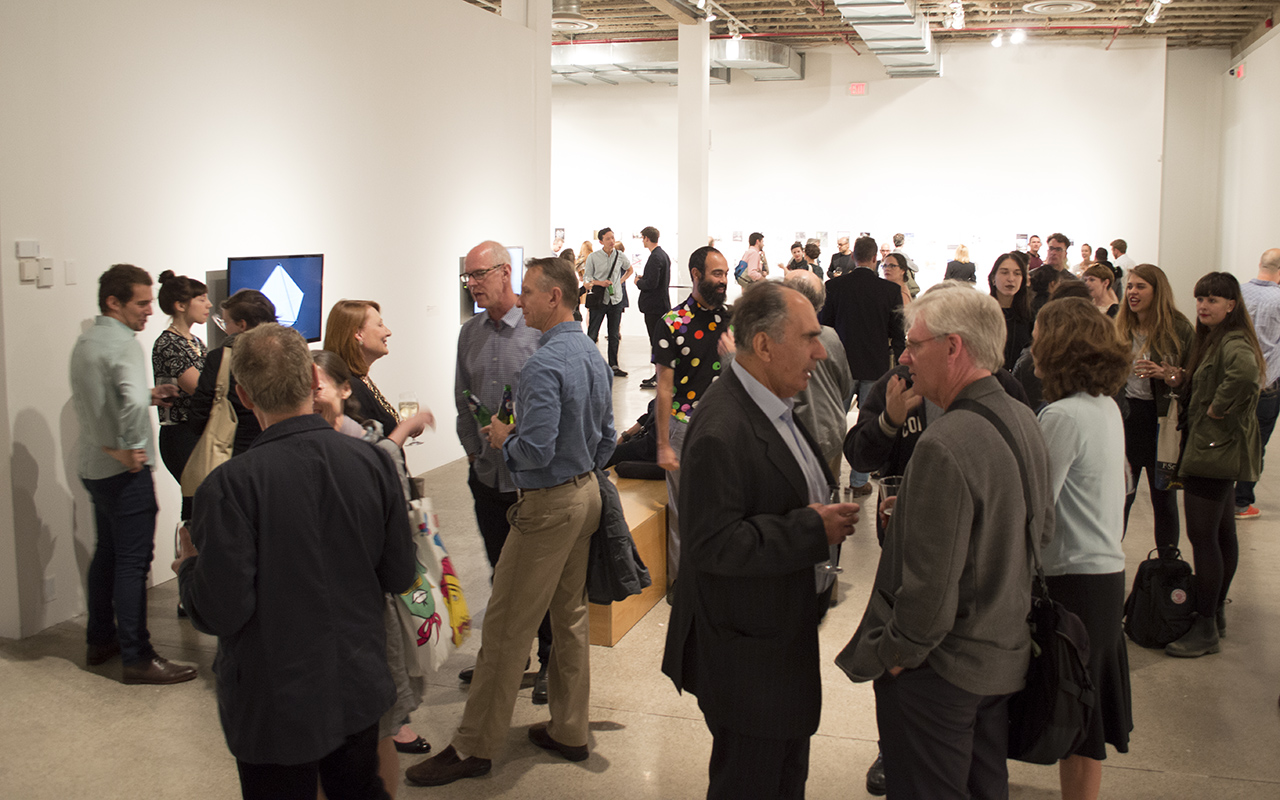