I was first introduced to the work of Alex Colville as an undergraduate student at the University of Manitoba. It was a typical frigid afternoon in Winnipeg when, with a click of her mouse, my professor had projected Infantry, near Nijmegen, Holland (1946) on the large screen at the front of the class. I remember looking at the crestfallen faces of the marching soldiers and thinking how similar the image looked to my earlier trudge through the snow to get to class. Perhaps it was a tad dramatic to compare the sufferings of war to my chilly commute yet that was the beauty of Colville; his ability to produce striking, unforgettable images that deeply resonated with seemingly everyone. 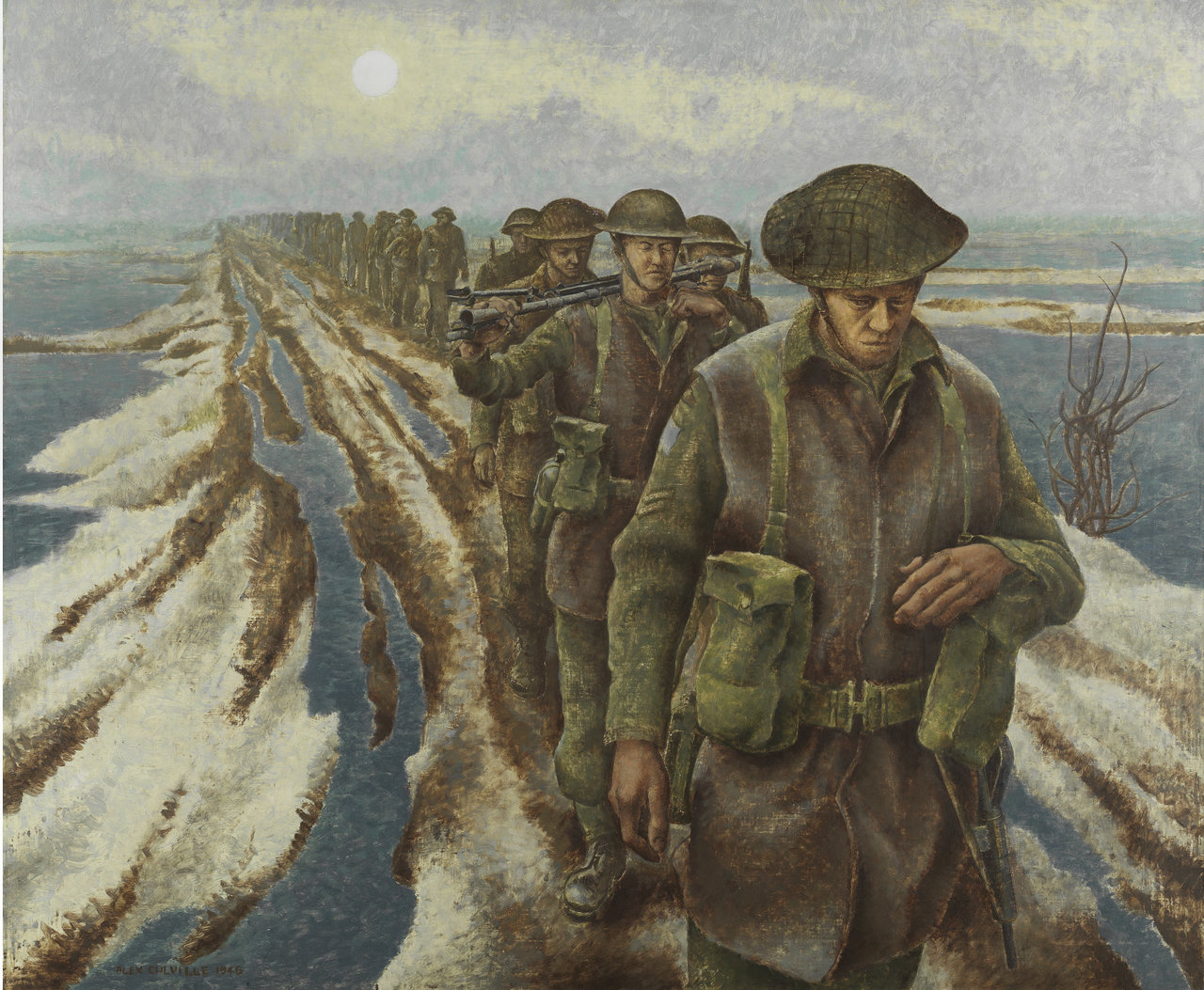 Curated by Andrew Hunter, the AGO has brought nearly 100 works by the late Canadian icon to Toronto, marking the largest exhibition of Colville’s work to date. Hunter has organized the exhibition thematically while managing to maintain a loose chronology as well. 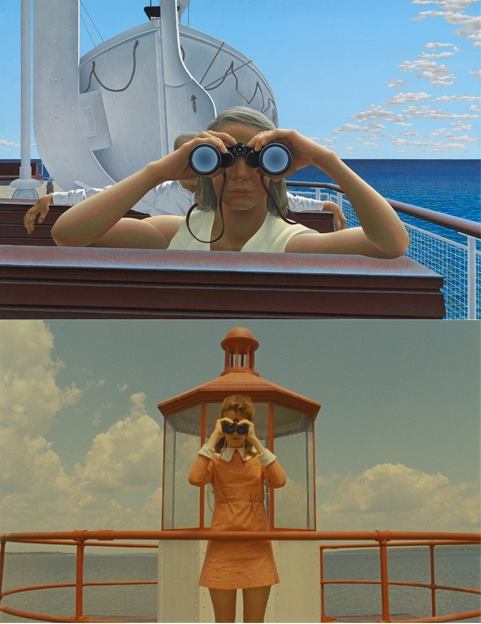 Upon entering the exhibition, guests are immediately confronted by a large projected scene from Wes Anderson’s 2012 film Moonrise Kingdom. The clip portrays protagonist Suzy Bishop, obscured by the pair of binoculars she holds to her face. The projection is adjacent to one of Colville’s better-known works, To Prince Edward Island (1965), which depicts Colville’s wife Rhoda similarly with binoculars in hand, compelling the viewer to face the scrutiny of the female gaze.  The exhibition is beautifully constructed to allow the projection to shine through to the final room of the show, reminding the viewer once again of the “active and intuitive power of female vision.” Anderson is not the only popular Hollywood filmmaker whose work echoes reference to Colville’s paintings, as additional comparisons to popular Hollywood films, and how they were visually inspired by Colville fill the exhibition. Another large projection displays a scene from the Coen Brothers’ Oscar-winning film No Country for Old Men (2007). The scene, which depicts the film’s villain Anton Chigurh, is compared to Colville’s arresting self-portrait Target Pistol and Man (1980). Both men share a powerful stare and cause the viewer to sense undercurrents of tension and the unknown, expecting something terrible to occur but not knowing exactly when. The presence of Colville’s paintings in Stanley Kubrick’s The Shining  (1980) is also highlighted. Unfortunately, Warner Bros. did not give the AGO permission to show scenes from the film but the four paintings, and the moment they appear in the film are mentioned. Guests are encouraged to watch the film on their own, though unlike No Country for Old Men, The Shining is not available for purchase in the exhibition’s gift shop. 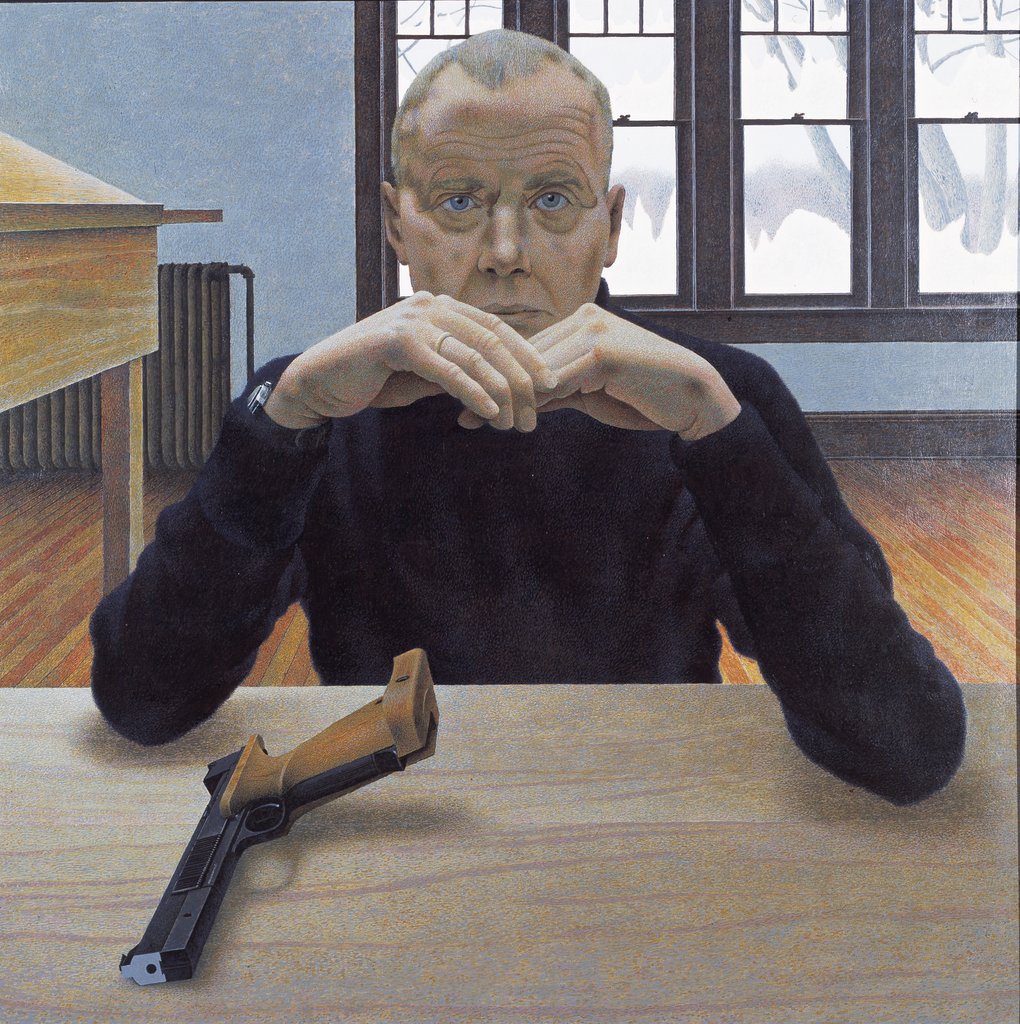 Following the opening comparison to Wes Anderson is the true beginning of the exhibition, works created during Colville’s time as one of Canada’s official war artists during WWII. Highlights include the previously mentioned Infantry, near Nijmegen, Holland (1946) and Soldier and Girl at Station (1953). In 1945, Colville was dispatched to the liberated Bergen-Belsen concentration camp where he witnessed the atrocities of the Holocaust that would haunt him for the rest of his life, inspiring works such as Bodies in a Grave, Belsen (1946). Bodies is unlike the majority of the works featured in the exhibition and is perhaps Colville’s most abstract.

Upon returning home after the war, Colville focused on his family and the quiet, rural Maritime surroundings that would later define his career. He lived in the small university towns of Sackville, New Brunswick and later Wolfville, Nova Scotia, where he was inspired by small-town life and rural surroundings. Colville’s preference for small town living was echoed in his statement that “I’ve never had the slightest interesting in going to an ‘interesting’ place…Wherever I am is reality, things are happening here, and this is ‘as good as it gets,’ as they say.” Yet Colville’s paintings managed to extend beyond the specifics of his Maritime locale, resonating with the experiences of all Canadians and an even global consciousness. 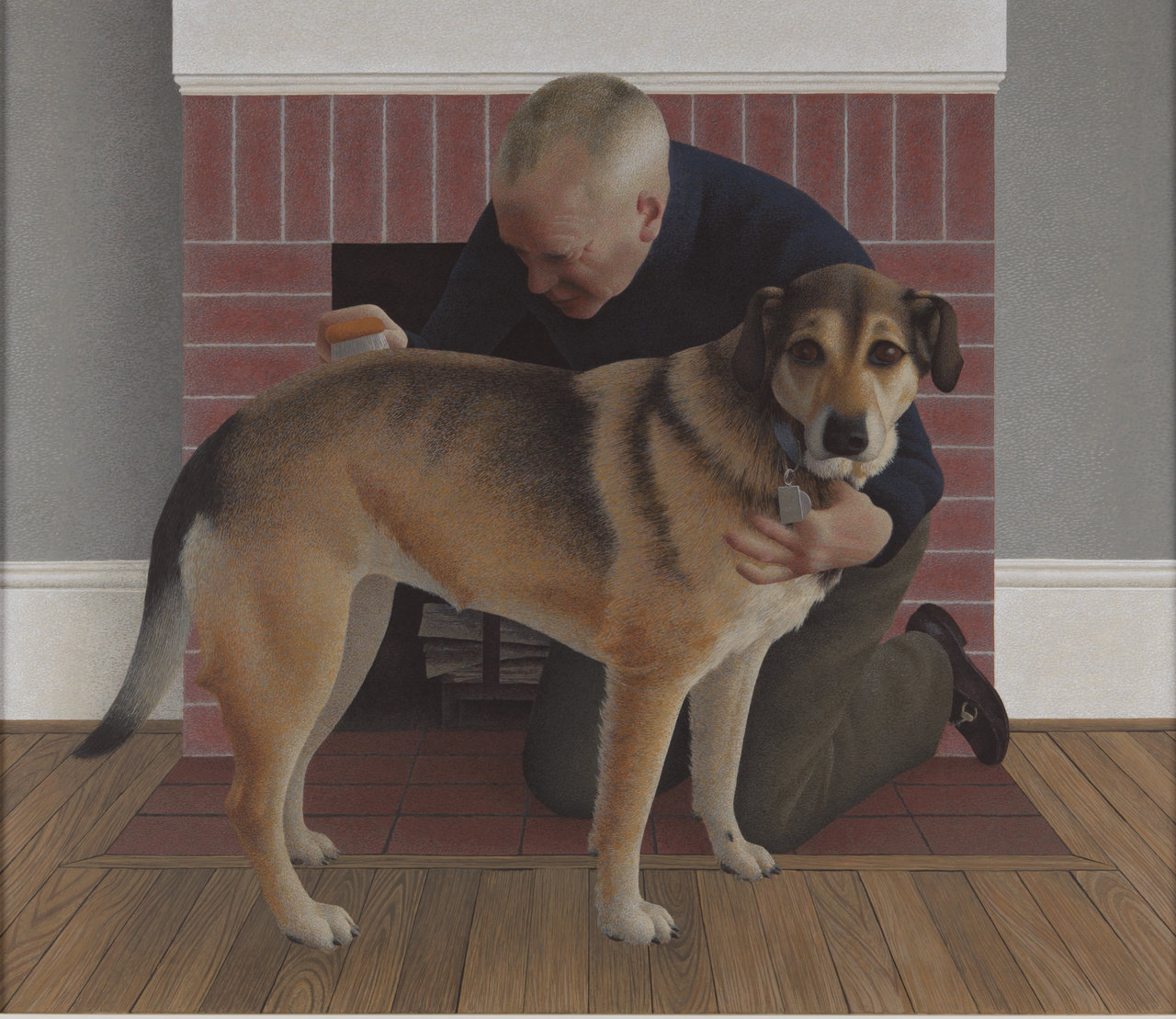 Animals played a prominent role in Colville’s daily life and are thus deserved of their own section in the exhibit. Colville viewed animals as essentially innocent creatures, stating, “I don’t think there’s such a thing as an evil animal.” His close relationship with his dogs is ever-present and addresses notions of companionship, loyalty and love. Such adoration can be seen in works such as Dog and Groom (1991) and Dog, Boy and St. John River (1958). Yet animals also serve as harbingers of danger and potential doom in Colville’s paintings. Horse and Train (1954) is a leading example of such impending tragedy, as the title figures seem destined for a disastrous collision. 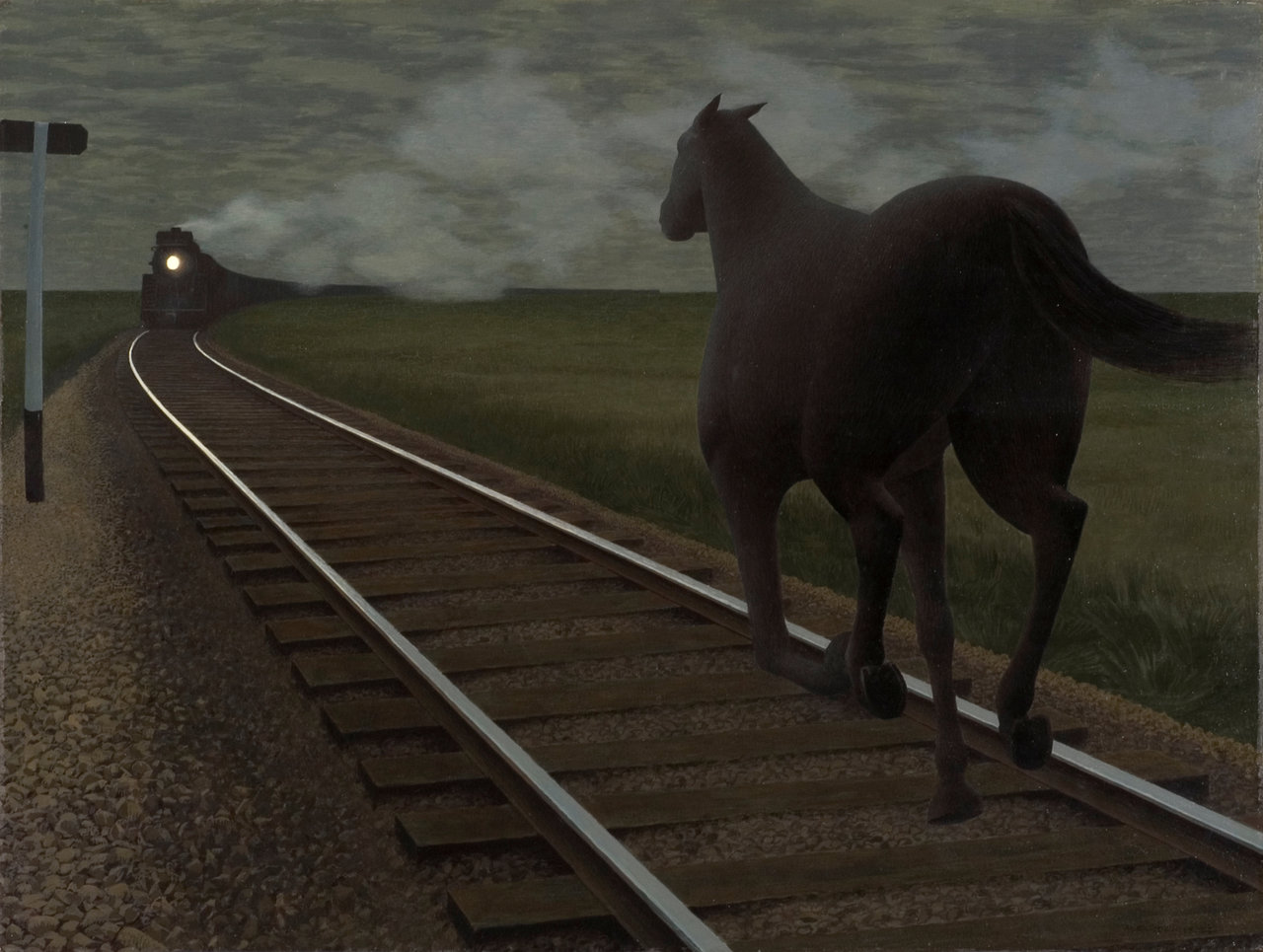 Perhaps the most central and important thematic grouping of the exhibition however, is that of “Love and Loss: Life with Rhoda.” Colville’s wife, Rhoda Wright Colville, served as “Colville’s faithful partner, model and muse” over their 70-year marriage. Placed together in a single room, the paintings of Rhoda view as an affectionate flipbook through time. As time weathered her face and whitened her hair over seven decades of marriage, Colville painted Rhoda with the same loving warmth until the very end. 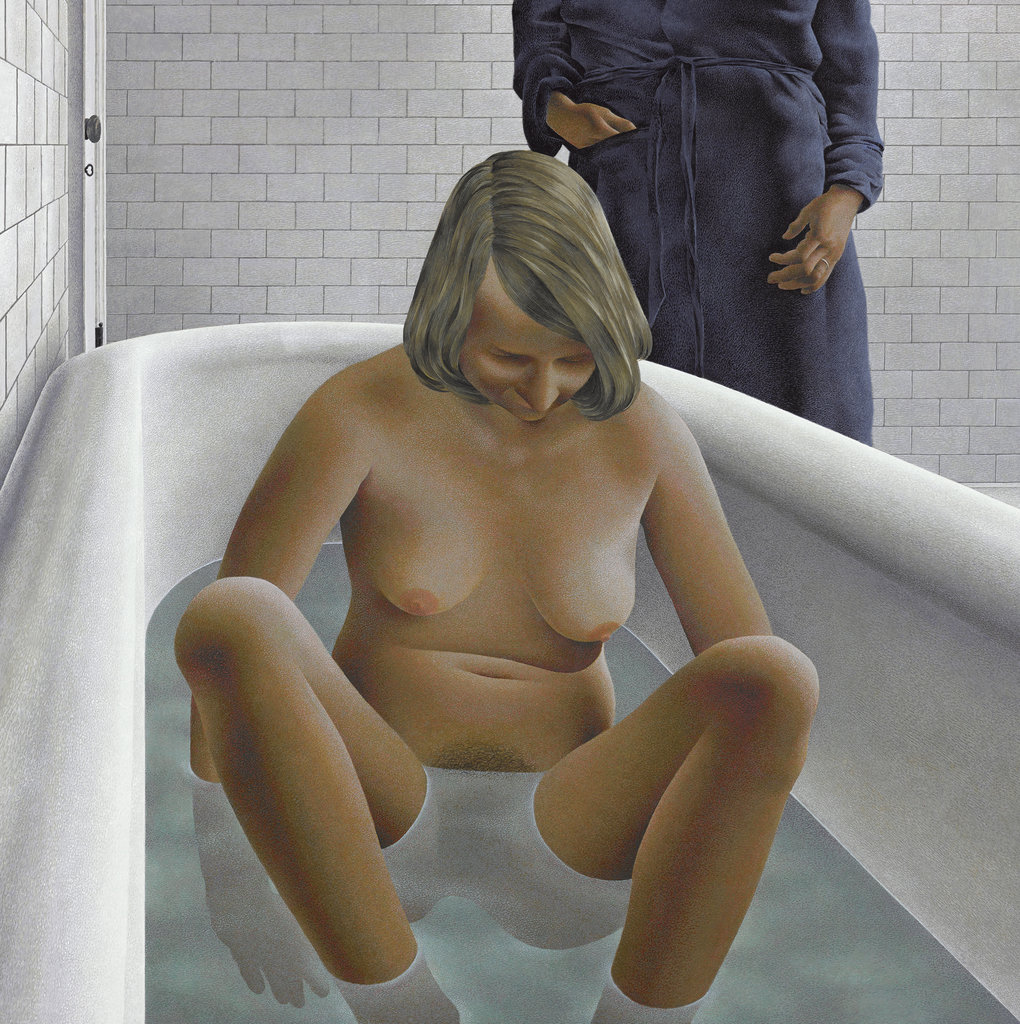 Colville’s paintings are an iconic match of the real and the unreal.  Through a combination of the common and the extraordinary, these depictions of everyday scenes unequivocally suggest an inherent danger. His works provide a haunting mix of intimacy and unease, turning the viewer into voyeur before a pivotal moment in an unfolding narrative. As Colville once said, “I think of things as beginning rather than ending.” For those wishing to begin their journey with Colville, the monumental exhibition runs at the AGO until January 4, 2015.