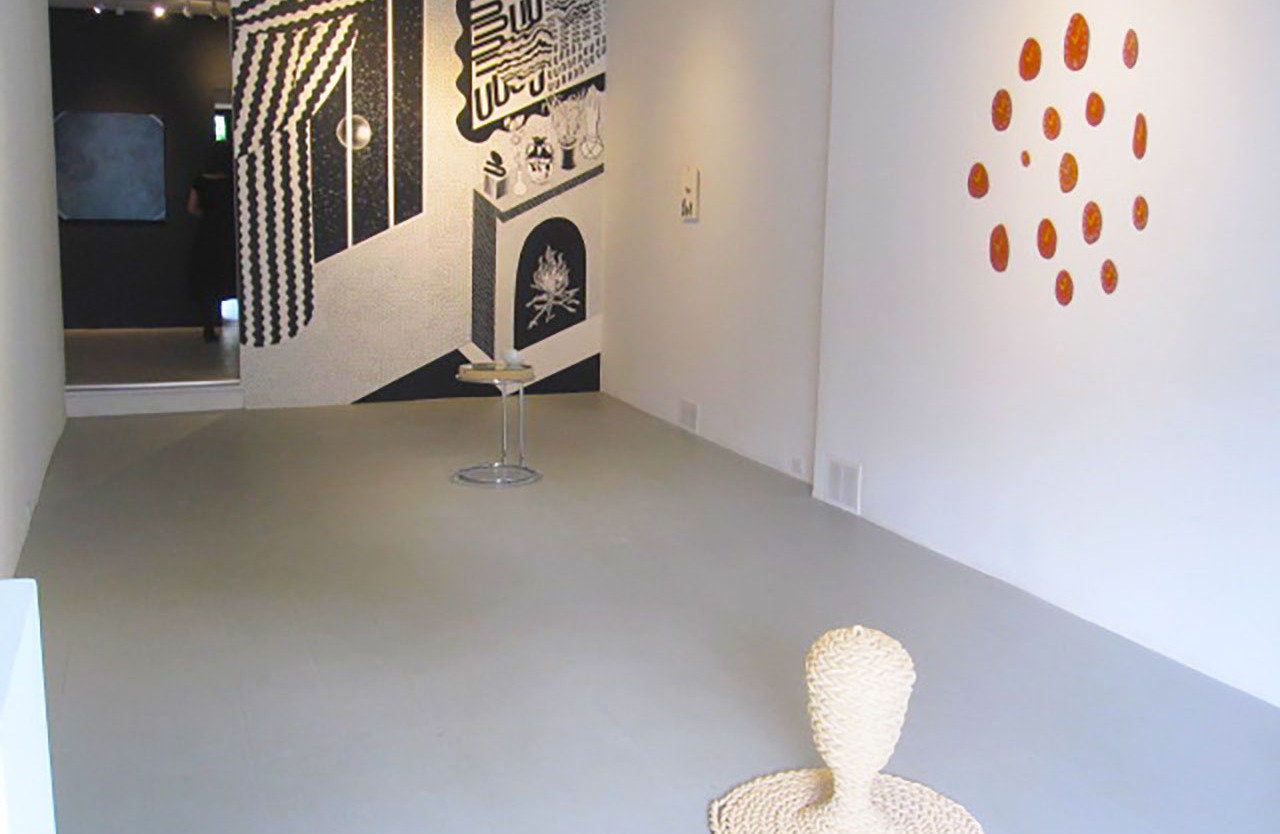 Upon entering The Moon Room, one notices the living room inspired setting of the space, and a peak of the black walls of the neighbouring room. Both spaces are divided by a massive, whimsical mural, which happens to be the centerpiece of the entire exhibit. The mural is a perspective rendering of a living room, with a big window that looks out onto the moon and the starry night sky. You are engulfed in this made-up space, immediately following along the narrative, and when you step beyond the painted window, you have entered space and experiencing the moon through several perspectives. Kristin Weckworth, the curator for Narwhal, got the idea for Moon Room after having watched a documentary titled Room 237 (a film exploring conspiracies within Stanley Kubrick’s film The Shining). Drawing inspiration from one of the explored conspiracies and relating it to humanity’s ancient and scientific theories of the moon, Weckworth brought together a group of artists she thought could make an interesting and harmonious constellation. 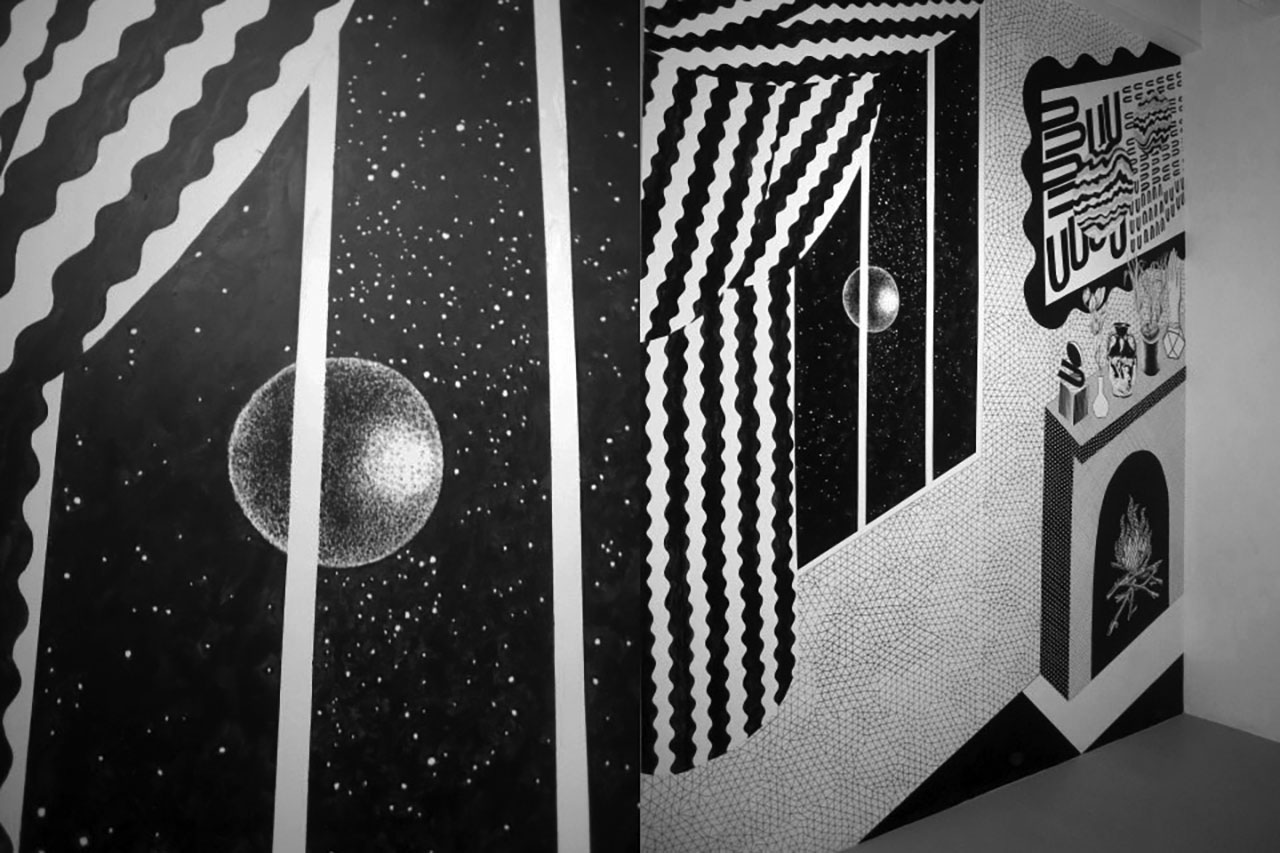 The, mural, entitled Goodnight, Moon, acts as the medium between the rooms. It does its job perfectly because it speaks loud and clear to the viewer, making it the first thing to be noticed. It communicates its message very well, because it is very easy to pick up on the concept of both rooms, being that the first room has white walls just like in the mural, and the second space has black walls, just like the dark sky outside of the window. Alicia Nauta, a printmaker, who created the piece, loves working with analog images and makes a lot of Xerox collages. This piece was originally a collage as well and is based on a popular 1940’s children’s book of the same title. Aside from its ominous presence, the piece also holds a certain strangeness to it because the perspective of the room does not correlate with the actual perspective of the gallery space. This causes the viewer to become a bit more aware of their relationship to the space. 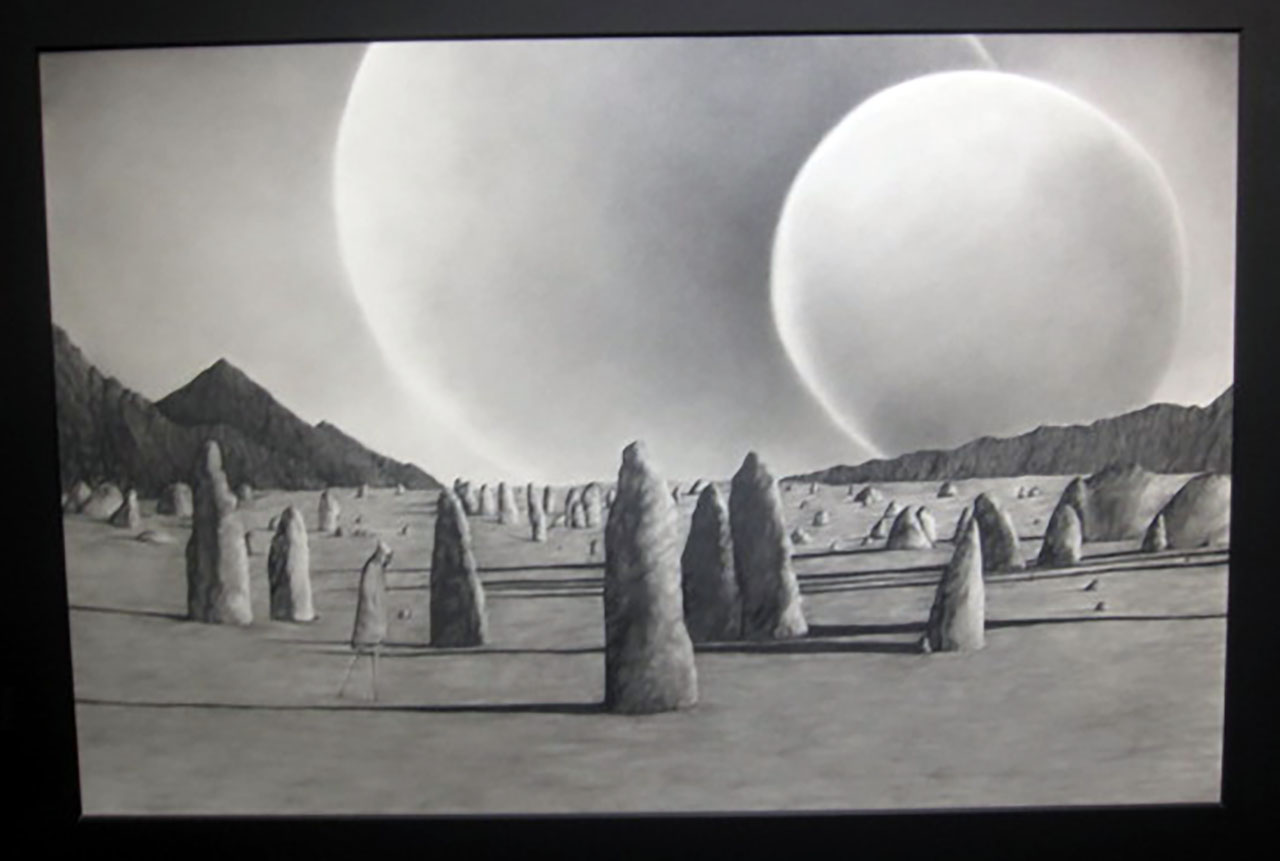 One of the art pieces in the second room is Adrienne Kammerer’s The Infernal Eternal: a large landscape graphite rendering with a sci-fi inspired theme.  Kammerer loves listening to sci-fi audio books while drawing, and she let her imagination guide her when creating this piece. For this work in particular, she wanted to produce a large landscape unusual for her because she typically makes small portrait style drawings. Kammerer’s beautiful scenery is an open-ended story left for interpretation. To me, it is the last-man standing on a post-apocalyptic moon, a few years after humanity had decided to inhibit it.