Sally Thurlow currently has her solo show, titled At The Root, in the Red Head Gallery. I spoke with her about her work as an artist, present-day environmental problems as well as feminist issues.

J.M: How did you become a sculptor?

S.T: I’ve been making art for a long time. I went to George Brown College in my early twenties for clothing design and recognized that it is really a form of sculpture. Later I went to OCAD, and studied some design and fine art there, then got a fine arts degree at the University of Toronto. I was painting for a few years. Then I decided to make a canoe out of white silk organza, with birch veneer; it came together really beautifully. The piece was shown at The Robert McLaughlin Gallery in Oshawa, along with a series of twelve sculptures I did, called, Canoe Dreamings. The series travelled around Ontario to six different public galleries from 2006 to 2008. After that, I kept on doing sculpture. 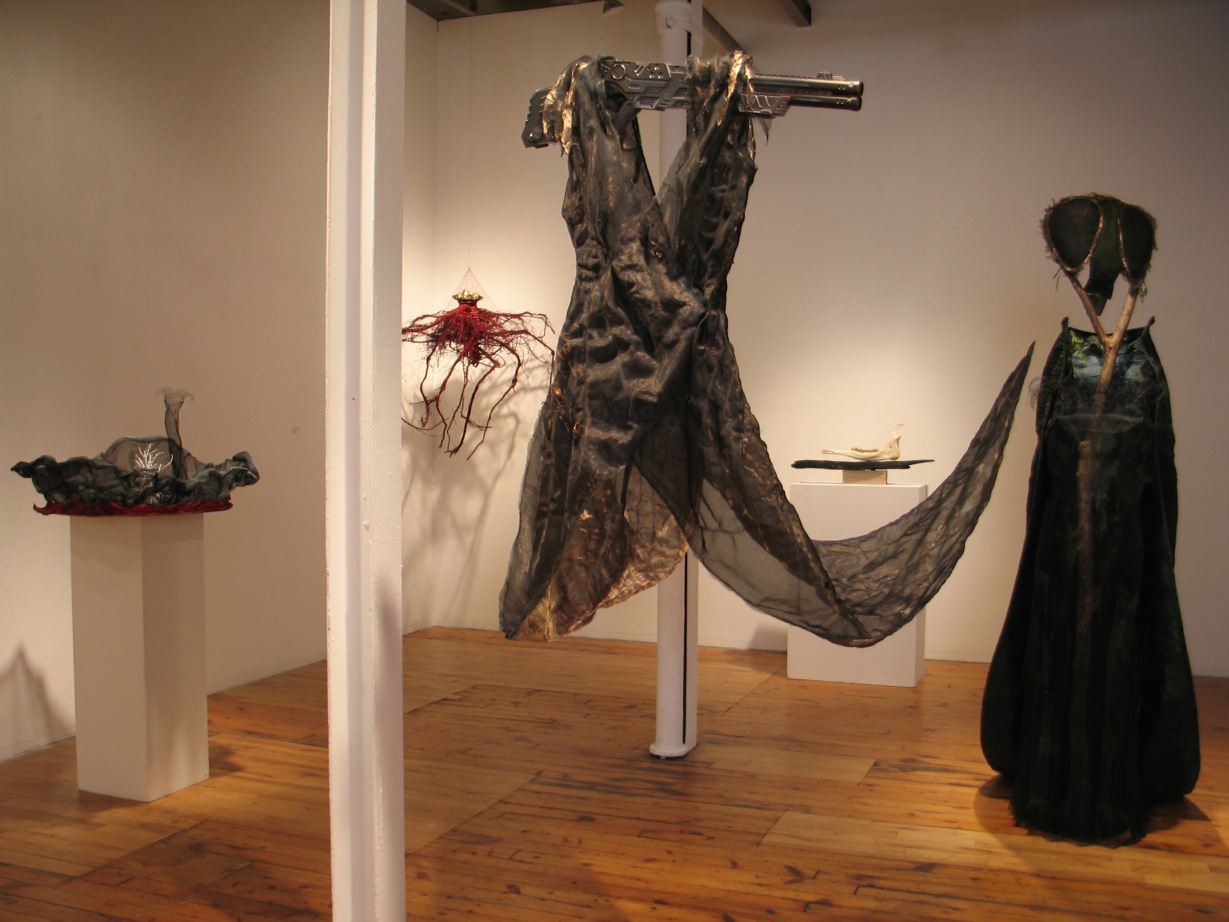 J.M: In your sculptures, you use a lot of wood, metal and fabric – a wild variety. How and why do you choose to express yourself through a particular one?

S.T: I don’t think of myself as married to any particular material. It just seems that whatever works for what I’m trying to say is what I’m going to end up working with. And certainly, because I live right on Lake Ontario, driftwood is a natural choice for me since I walk on the beach and pick them up. I’ve done a lot of work about the junk that we find on the beach, such as plastics and other debris. I’ve incorporated those materials into my work when I had something to say about trash on the beach, as in my work for the WhiteOut exhibition last October in Toronto. The two fabric pieces that are in the At The Root show, “Winged Tragedy Dress” and “Systems Failure II”, are actually re-formatted works that were part of Canoe Dreamings; they made up a hammock that I called “Systems Failure”. They relate well to the other works in this exhibition. 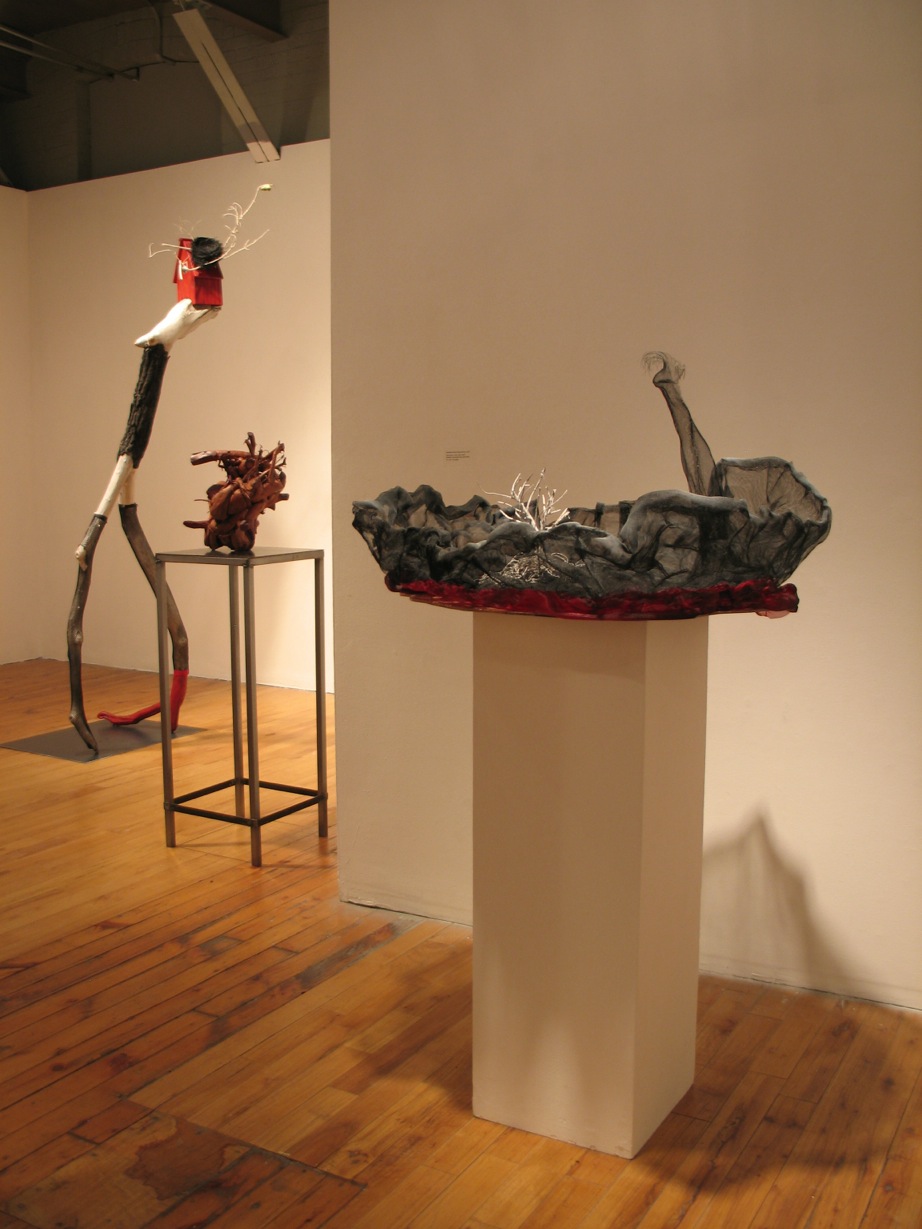 Installation view,  At The Root, The Red Head Gallery, 2015. Photo: Courtesy of the artist

J.M: The “Fascinator” is sexual and sensual at the same time. A “Complicated Goddess”, you say, and indeed it is heavy with symbols. Where is your inspiration coming from? Could you tell us more about her?

S.T: She is a tree limb, and I am relating her to Mother Nature. We throw all kinds of problems at Mother Nature and blame her for summoning troubles that are actually our own doing. But “The Fascinator” is also the Female Form. The lack of respect for women all over the globe, the fact that sexual violence against not only women – but everybody, is wrong, is definitely getting more attention now in the news and is actually getting new legislation in Ontario. It shouldn’t be a matter of how you dress – whether you dress provocatively or not – it’s about educating tolerance from a young age. Nobody wants to be raped or taken advantage of; women have a hard time owning their sexuality. Especially now, if you go outside wearing something that looks sexy, you are called all kinds of names, and yet sexuality is highly commercialized. It’s really unfortunate for the younger generation that they have to deal with that.

I think that the figure I made is fully self-aware, and she’s certainly out there. Self-awareness is something that happens over time with a lot of good messaging and positive, loving relationships. I definitely feel that women need positive role models. If you don’t own your body, and have confidence in yourself, then you’re just being used and maybe abused. It’s complicated! 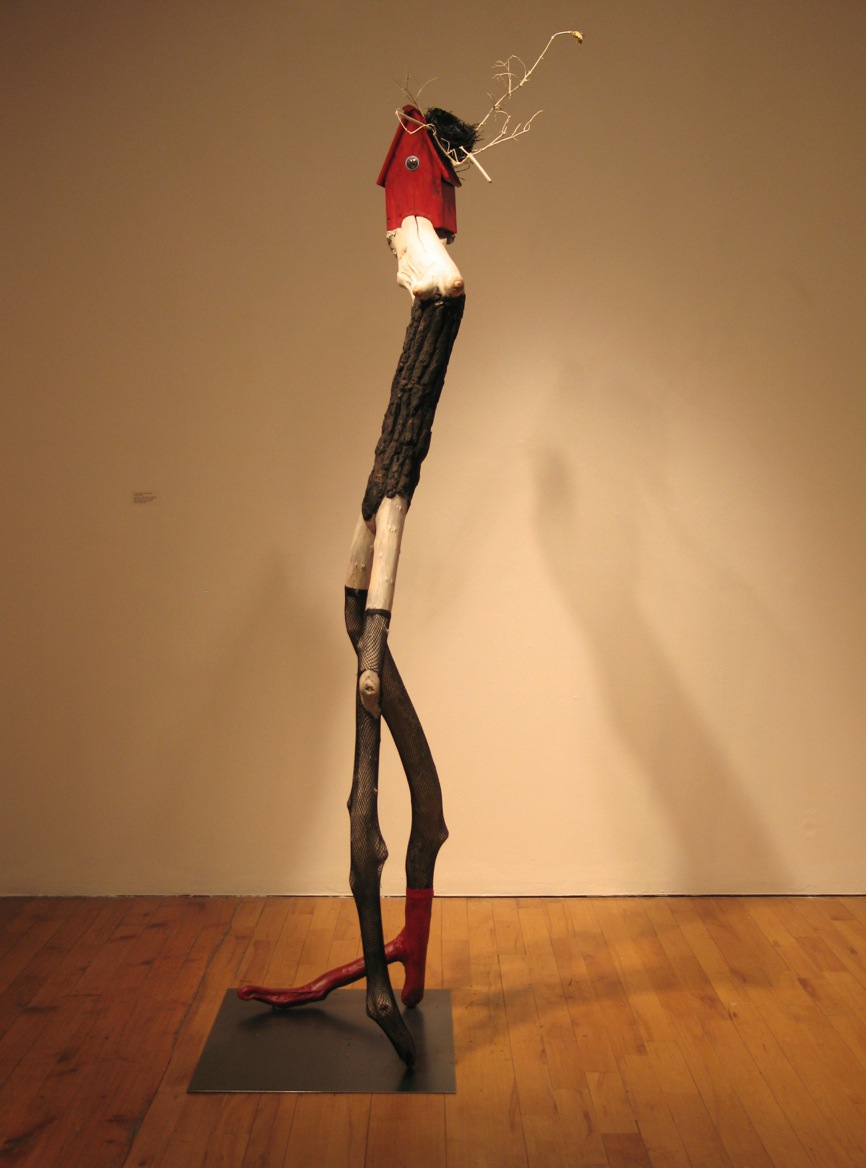 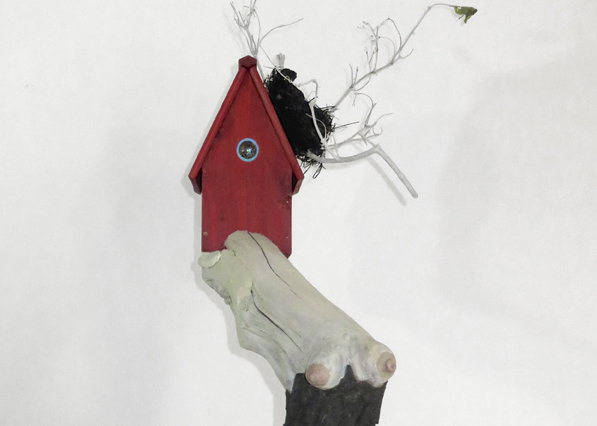 Sally Thurlow, The Facsinator: A Complicated Goddess, 2015, detail. Photo: Courtesy of the artist

J.M: Speaking of Mother Nature, your work is deeply inspired by nature. Aside from living amongst it, have you always been interested in Nature?

S.T: Yes, as a kid I grew up in Hogg’s Hollow, in Toronto. The Don River was close by, and the valley was encircled by a forest. In my days we walked to school quite a distance, and you got called in for dinner by the dinner bell. You would come out from the woods, or up from the river. It was a wonderful way to grow up, very different from now when everybody is being driven here and there, and barely having the chance to discover nature. Also, I’m a devoted gardener.

J.M: The interpretation of nature in your beach-inspired landscape sculptures utilize aluminum, which does not have an organic shape compared to the other shapes (rocks, plants, etc.). Why did you decide on that material?

S.T: Screening is a way of forming organic shapes very easily because it’s very bendable. If you put two layers of screening together, depending on how you place them, you get this watery, shimmering effect that moves when you look at it. So, it has a very organic feel to it, and at the same time you can also see the land through it.

They were made from black aluminum window screening. I was in Gros Morne National Park in Newfoundland for a six-week artist residency. The rock forms in Gros Morne are just incredible: some places have egg-shaped rocks, while other beaches have jagged rocks. I was fascinated with them. I took some screening with me, and used it to press the forms of different rocks. Then I brought the materials back to my studio, pressed it more and worked from there. I added things that I had found nearby, such as plant material and shells, just to say which area the rocks were from. I also did that with some rocks from Lake Ontario. I refer to the shorelines because it wasn’t just about Newfoundland, it was about waterways that connect us. 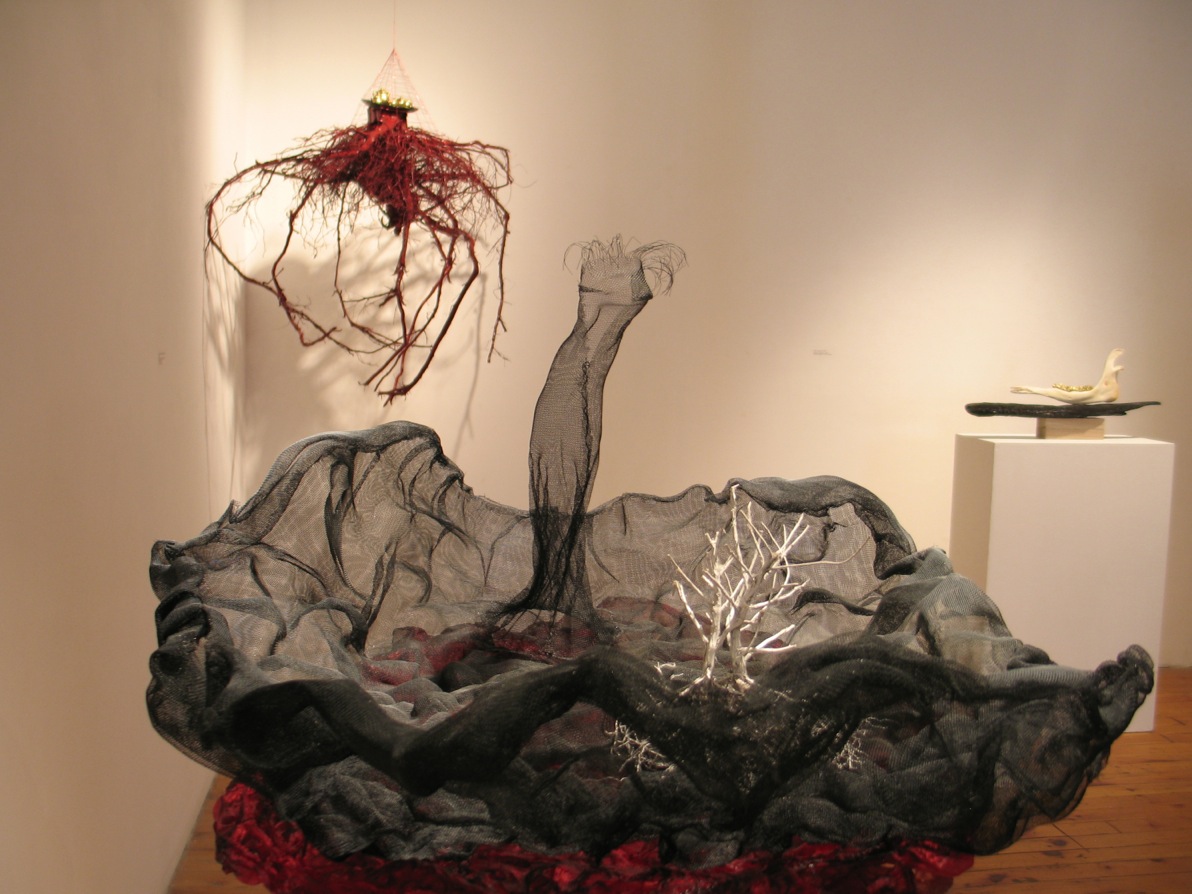 J.M: Can we talk about your roots sculptures? Some of them are dramatic, while others are rather playful. Please tell us more about them. 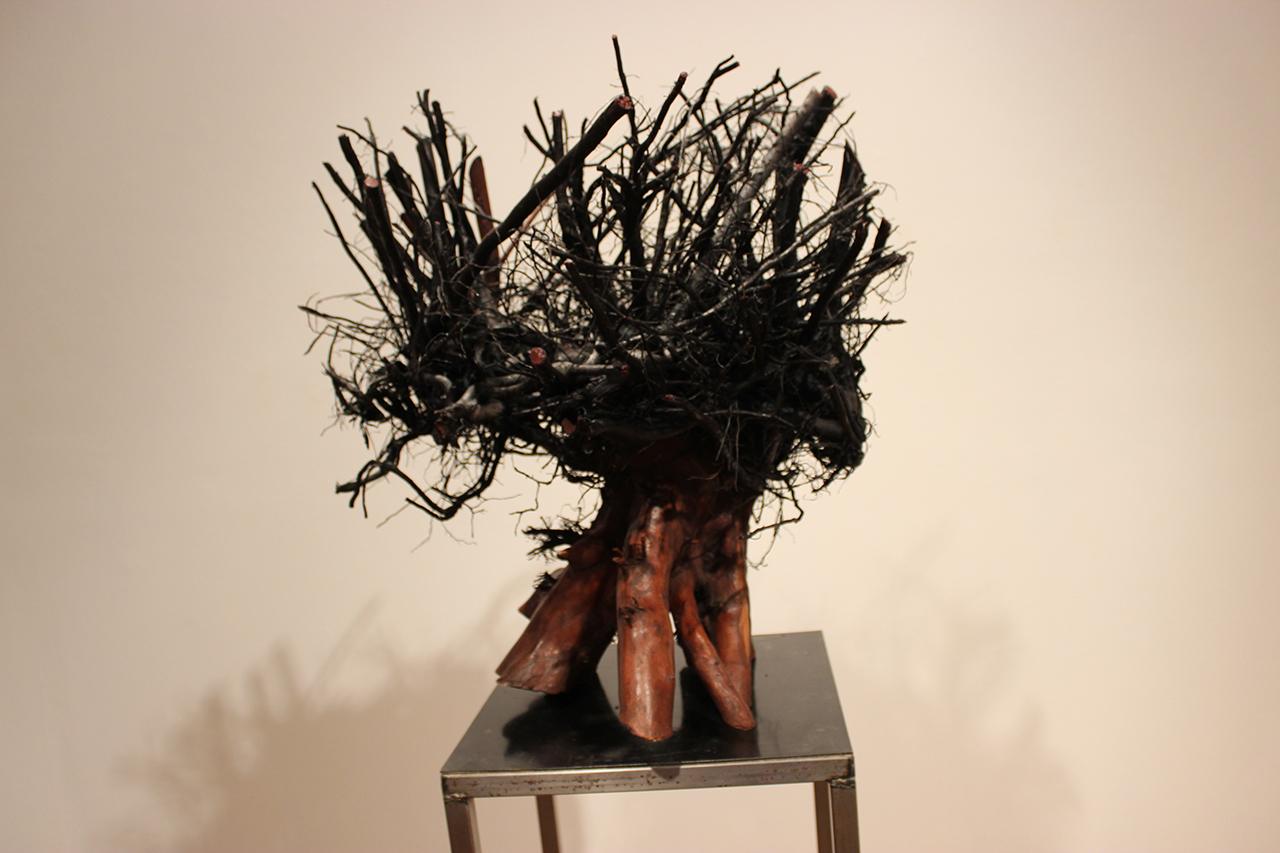 S.T: That root was from a dead mulberry tree in my garden that I was trying to dig out. I cut the tree at the base and ended up having to saw right through the root to cut the tap root. When I brought it up, it looked so much like a broken heart. I named it “Agony” because it beautifully describes a broken heart. 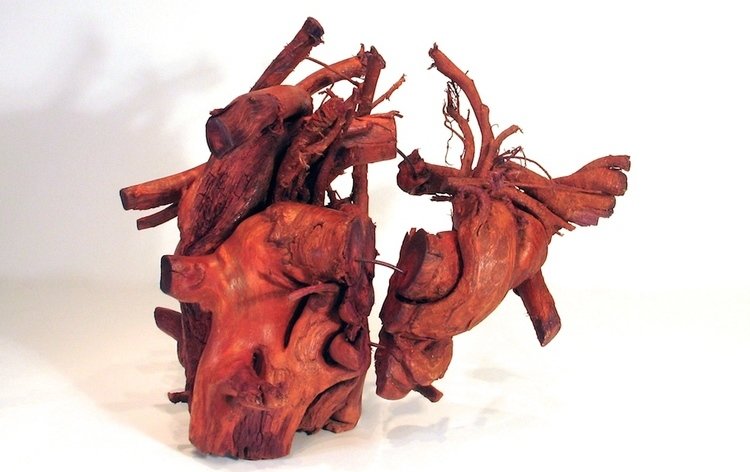 J.M: What are your future plans?

S.T: Well, it’s too early to talk about any of them. I have a lot of stuff in my studio to work with. When I do one thing, it speaks to me about doing other things that relate to it. So I just follow their lead and go on.