As I make my way into Daniel Faria Gallery to see the solo exhibition My Life by Montreal artist Valérie Blass, I quickly realize that my perception and even my understanding of reality is going to put to the test. With eleven works consisting of mostly sculptures, My Life is a disarming show where viewers are left with the perplexing task of untangling the powerful dialogue Blass created between her pieces.

With every new angle of Blass’ sculptures, my initial interpretation is challenged. A good instance of that are the works “Sois gentil” and “Sois gentille” (Be Nice). Entering the gallery, they simply appear as two pieces of rod, a few meters apart, with a small mass dangling at the end of each rod. But as I gradually get closer, I realize that these masses are in fact intertwined bodies. I can’t help but stare at the explicit sexual scene at the end of each rod, and that from every possible angle, trying to understand the mechanics of their twisted embrace. I don’t know if I find the works vulgar, awkward, or even violent, but I am both hooked and puzzled. Is the rod a body, a penis, a bed? Why did the artist install them this way? And above all else, why are the titles gendered differently (gentil-gentille)? 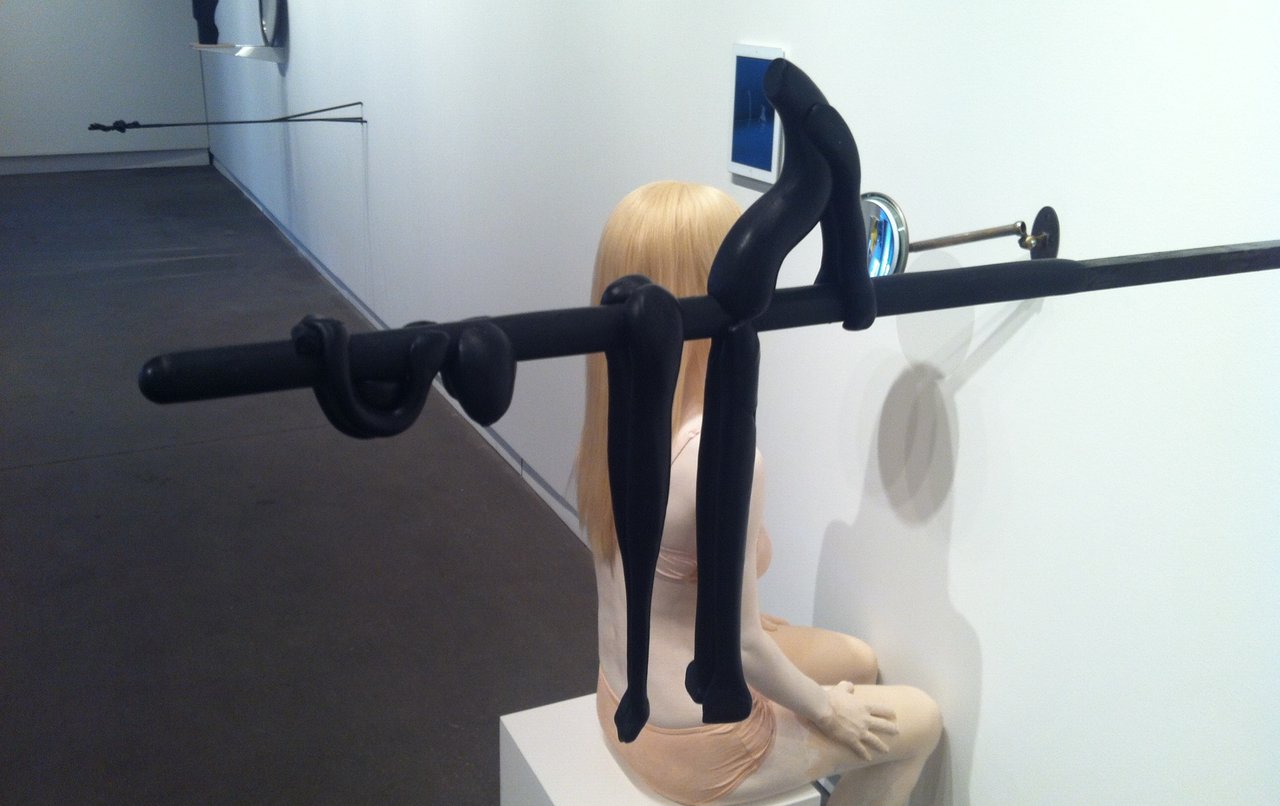 With her titles, Blass further distorts our understanding of her work. The work “Je suis une image” (I am an image) is another prime example. Both a clue and a challenge, the title adds another layer of complexity to the work. Hanging horizontally from a rod are blond hair extensions and just below, also standing with the help of a rod, is an arm taking taking off a pair of pink underwear from a leg. Discussing the work with Blass, she tells me that she often looks to the past as a source of inspiration. Using marble looking material for the arm and leg, the artist mixes antiquity and contemporary, and by doing so, creates an unsuspected dialogue between the two periods. She shares with me that while creating the work, she had Renaissance depictions of the Birth of Venus in mind. 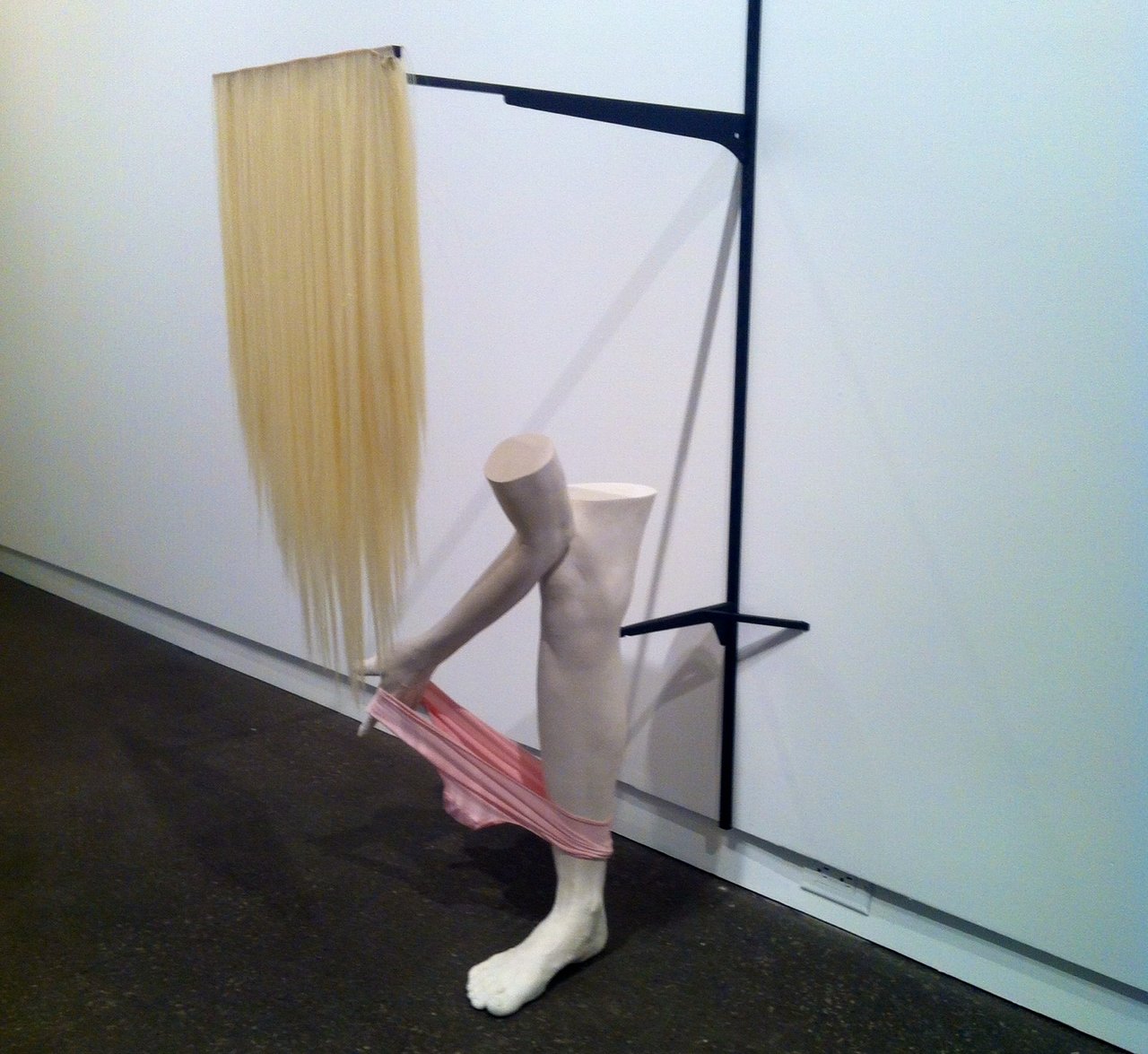 It is clear however that we are witnessing a very different kind of Venus. In his famous book Ways of Seeing, John Berger [1] defines the gaze as something inherently masculine. As he writes: “the surveyor and the surveyed… One might simplify this by saying: men act and women appear. Men look at women. Women watch themselves being looked at… [and] the surveyor of woman in herself is male” [1]. More than forty years after the publication of the book, Blass manages to turn Berger’s theory on its head, and that, perhaps more successfully than any female artist before her. With this work, Blass reclaims the female body and redefines both the politics and dynamics of the gaze. Her Venus is one that is full possession of her sexuality. She is the sole proprietor of her gaze and as such, this distorted Venus represents a new kind of sexuality, a new kind of empowerment, and an embodiment of the clever statement made by Artspeak director Kim Nguyen who described Blass’ art as “dangerously female” [2].

Gazing, the act of looking, is an integral part of My Life. Along with “La méprise” (The Contempt), “Dr. Mabuse psychanalyste” is the second work of the exhibition to have a mirror. Looking at the mirror is a seated life-size blond woman in her underwear. Just as with “La méprise”, I was left with no other option but to move around the work in order to try to understand what I was seeing in the curved mirror. But this time around, instead of seeing a disproportionately large nose, I discovered a small face inside the head of the seated woman. Going back to the title of the piece, “Dr. Mabuse psychanalyste”, is the artist sharing with us her views of psychoanalysis and its theories on childhood and sexuality? Once again, the title only leaves the viewer more puzzled. 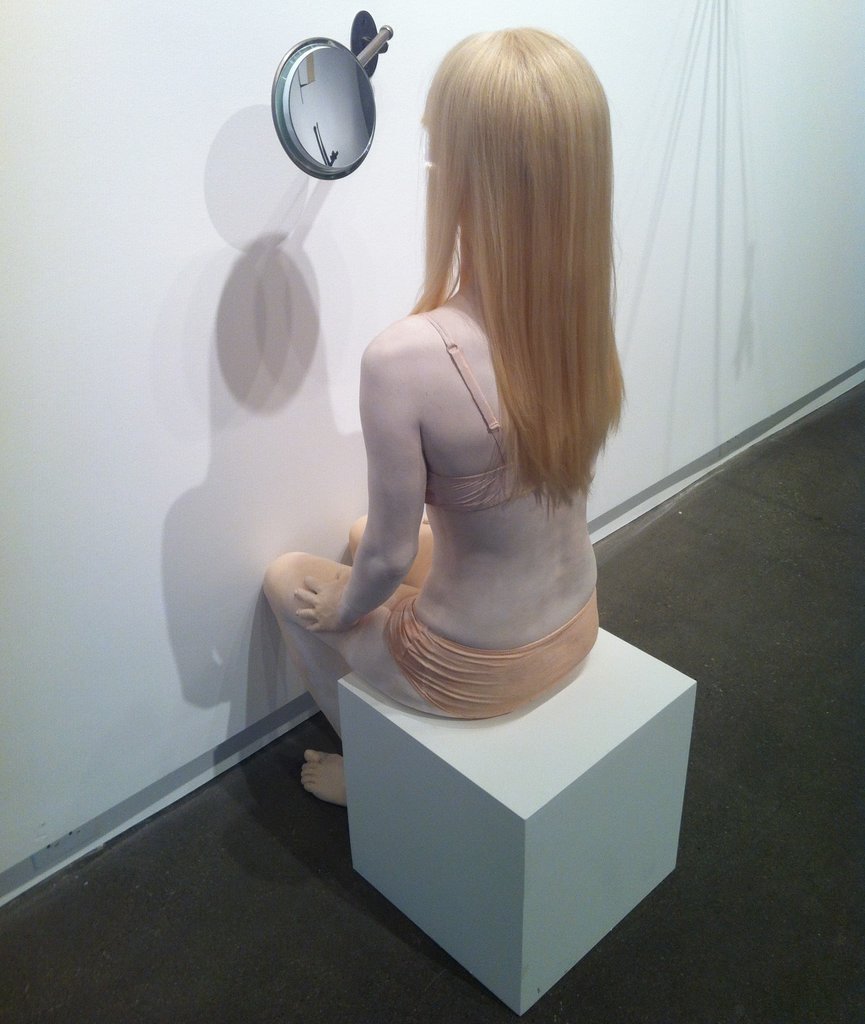 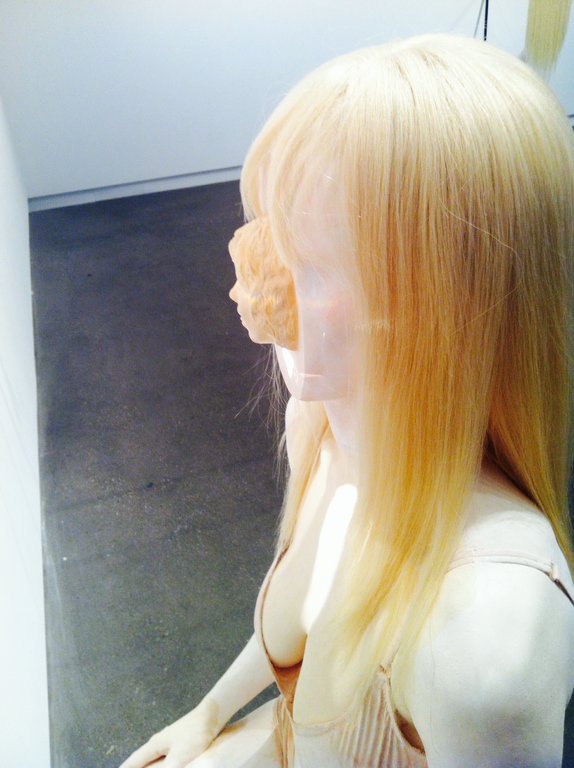 With this exhibition, Daniel Faria Gallery offers us a glimpse of Valérie Blass’ world. It is a world that is simultaneously surreal, filled with tensions, and sexually charged. Nguyen described her art as slipping in and out of fiction. I would rather say that with Blass, it’s not so much about slipping in and out of fiction, but rather about catching her reality. However, I believe that just as it is the case with her Venus, we can never fully catch the Blass’ gaze.