Walking into the Pari Nadimi Gallery, the viewer is immediately drawn into Matilda Aslizadeh’s riveting world. Very dimly lit, the sole source of light is coming from the only work of art displayed in the room, Trophy, a tall white semi circle upon which is projected a series of images masterfully put together by the artist.

Starring at Aslizadeh’s digital collage of images she found on the Internet, one doesn’t know whether to feel enchanted or disturbed. Like a carousel rotating around its platform with its wooden horses and circus animals, there is something rather playful and addictive about Trophy that will make viewers feel like they could look at the work for hours, as though waiting to see their favourite horse reappearing over and over again. Aslizadeh’s carousel however, is so oversaturated with images that it is hard to know which one you’re not seeing for the very first time. 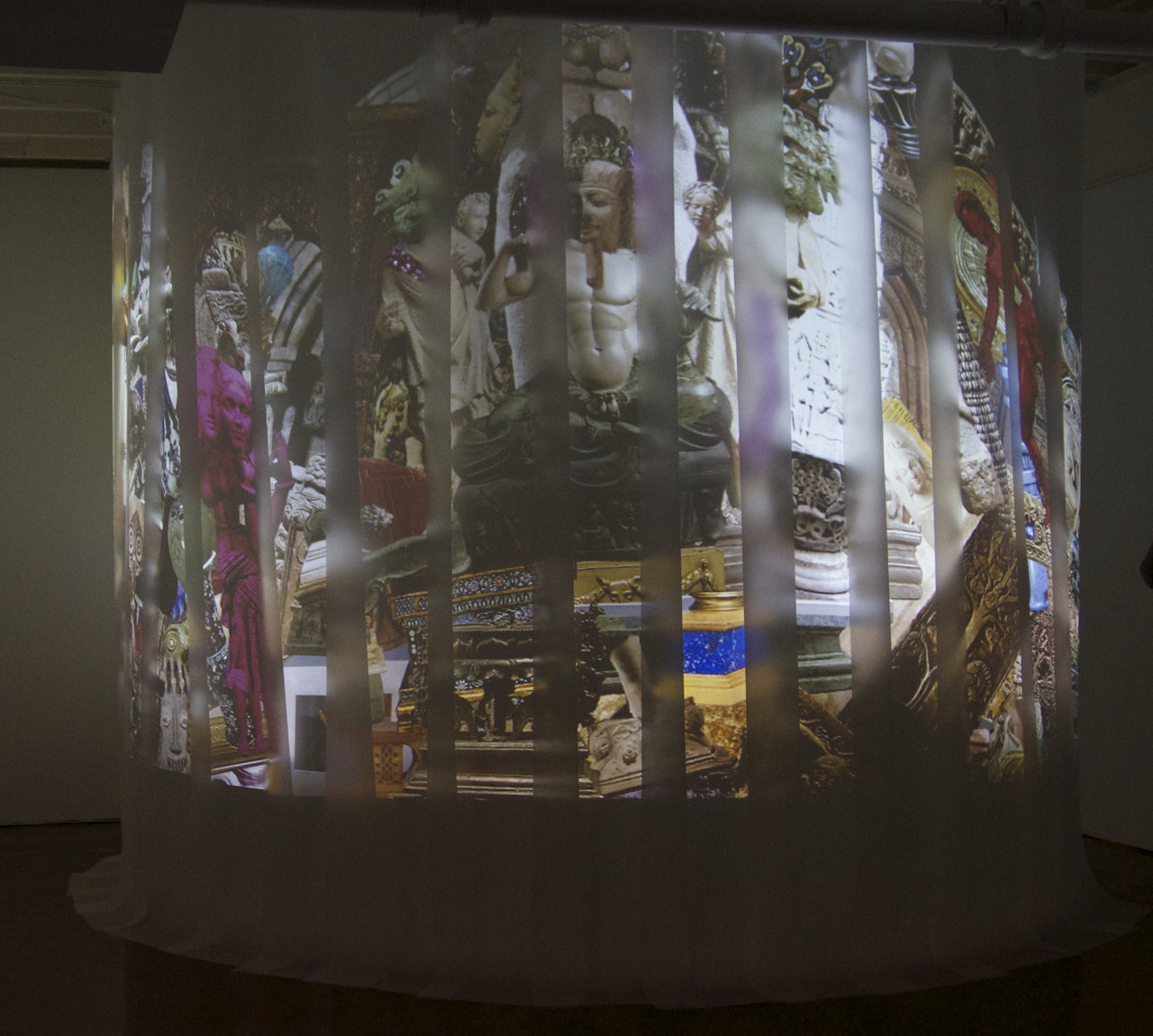 Indeed, rotating around the semi circle is Aslizadeh’s own circus: a peculiar cluster of humanity’s vestiges. Trapped in a spider web of lost arches, golden pillars, baroque altars, and fluorescent angels, the viewer can make out what could be described as societal exquisite corpse: a mix and match of various Buddhist, Egyptian, Greek, Hindu, pre-Columbian, and Roman gods and deities. Copy-pasted together, the result is both surprising and conflicting. Trophy is also punctuated by glitters and sparkles. For instance, the eyes of certain mythical Gods have been replaced by colourful diamond, leaving them with bright, but empty gazes. When asked the reason behind her sparkling chaos, the artist shared that she wanted to display society’s kitsch and its constant need for entertainment. 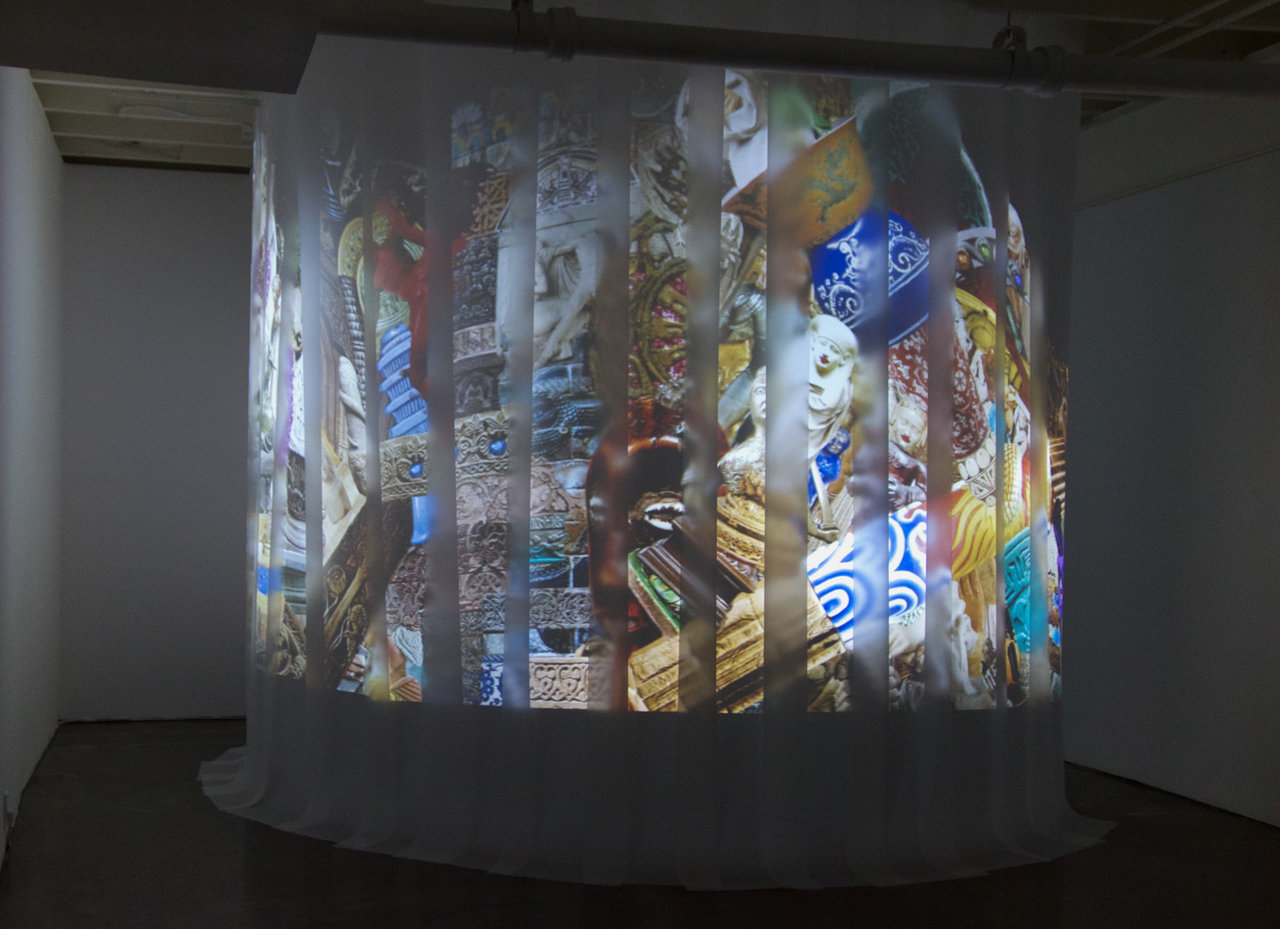 While the work possesses a captivating and soothing quality that is almost troubling, the music the artist chose to accompany her piece is the element that will start to make you feel uneasy about what you’re seeing. From powerful hymns to war chants; from gunshots to the sound of casino machines; from cheering and applauses to voices in distress, as the images rotate, they always seem to be juxtaposed with a new sound, its constant shifting making it very hard to interpret their meaning.

Interpreting Trophy feels very similar to waking up from a particularly perplexing dream; your mind is processing a lot of broken information without quite knowing how to put the pieces back together in a way that makes sense. Like the projection of a surrealist dream, what Aslizadeh seems to have unearth, is nothing less than society’s unconscious. Unearth, as in many ways, as we are looking at the ruins of our society, a youtube cemetery, something that Marinetti would have certainly labelled as a futurist party. 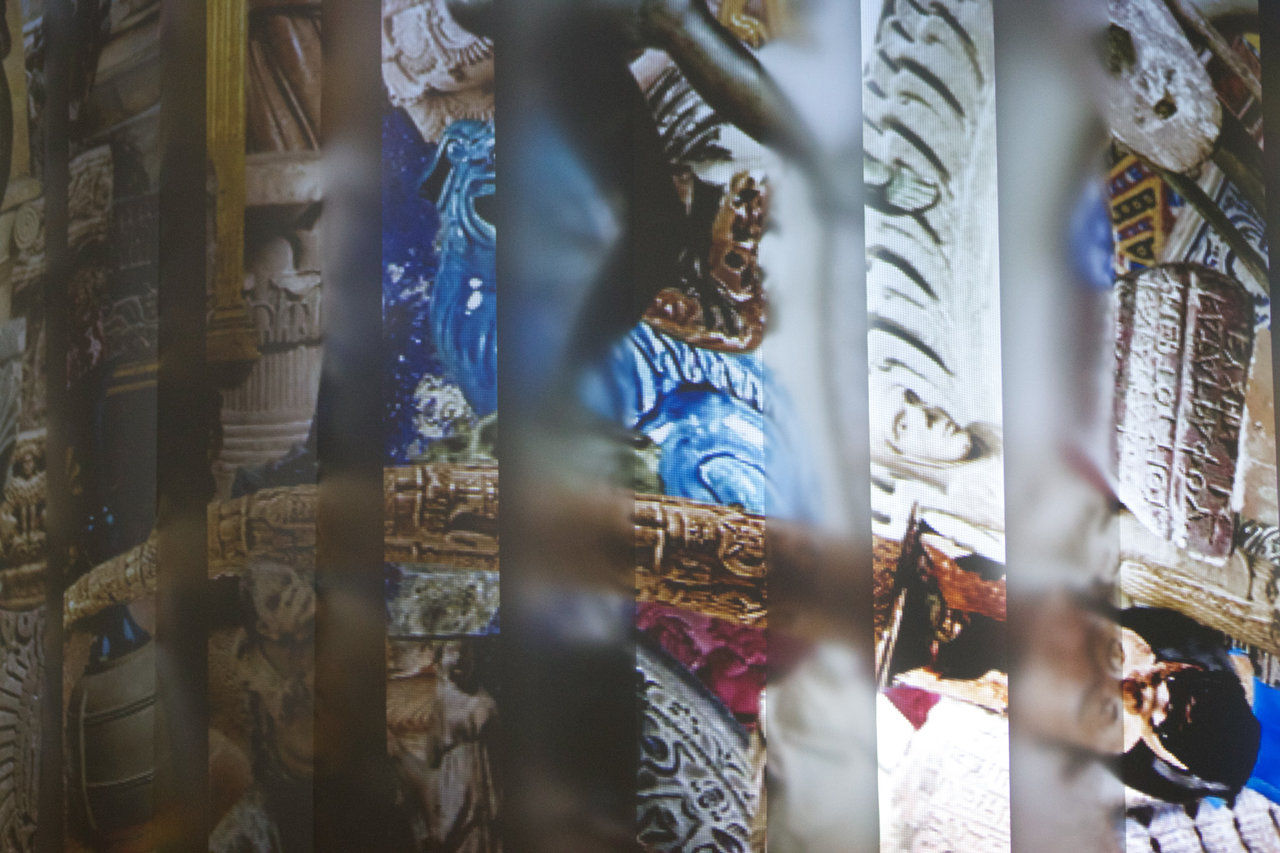 The semi circle installation is also not without reminding one of a naked Greek base column, as if Aslizadeh’s ruins were also exposed on a ruin. The images are moving up and down the column, as do the horses on the carousel. This movement gives life to the inhabitants of the artist’s deitic disorder and brings them out of their two-dimension condition until they disappear behind the carousel, inviting the viewers to venture behind the work. 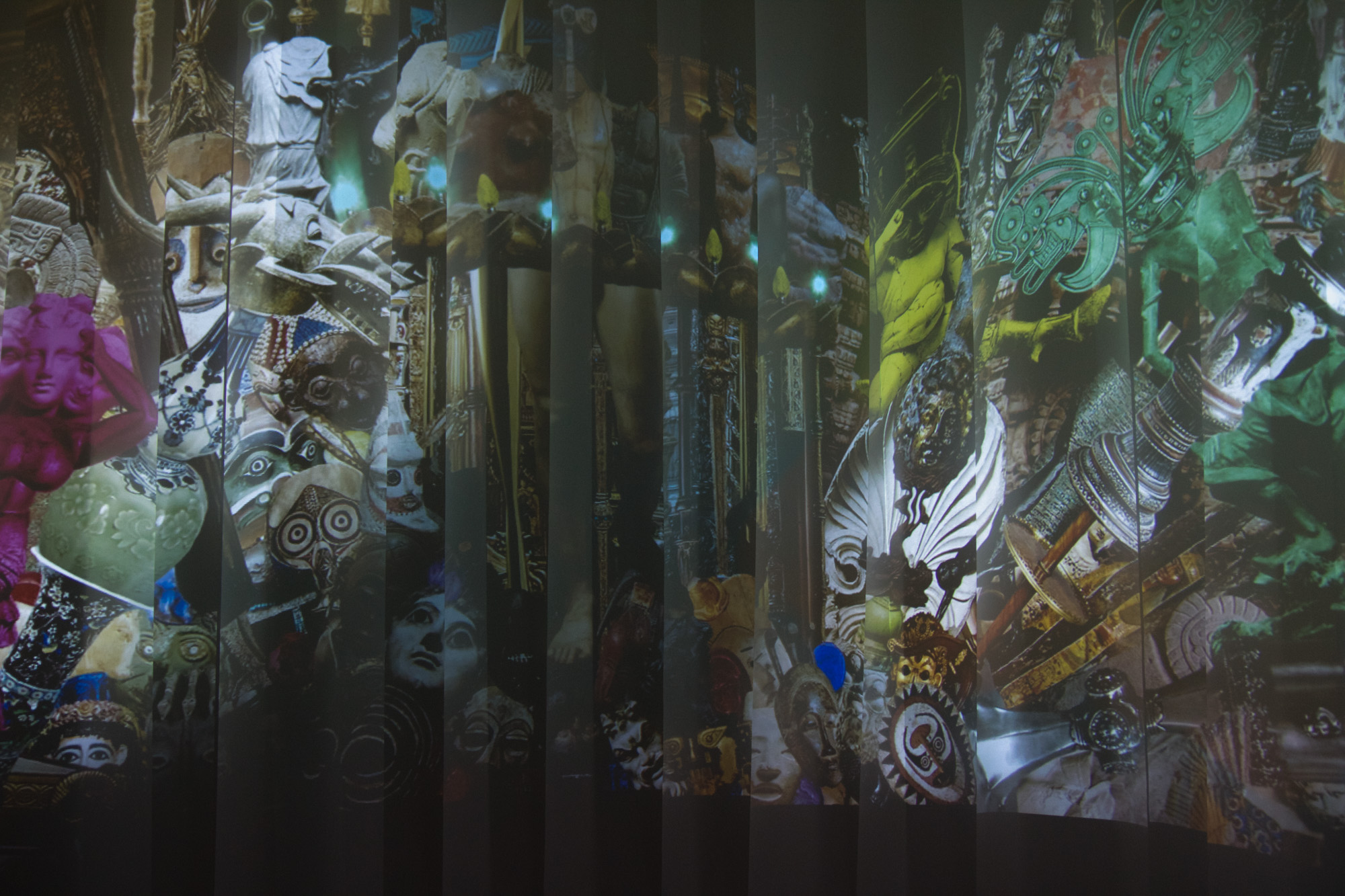 When I came out the inverted part of the carousel, I saw something that had until then escaped my eye. On the upper corner of the wall, facing Trophy, is a small projection that looks like a window. Aslizadeh told me that for her it was a kind of shrine. In dialogue with Trophy, it is of course a very atypical kind of shrine. To what or whom is the shrine dedicated? And how does the shifting image provide tribute? Finding an answer to this question becomes even more complex when considering the title of the work.

The Pari Nadimi Gallery is perhaps the best display for Aslizadeh’s challenging work. Small and intimate, it is as though the artist created Trophy with this space in mind. While it is the only work displayed, it will capture your attention and continue to puzzle your mind long after you will have left the gallery.