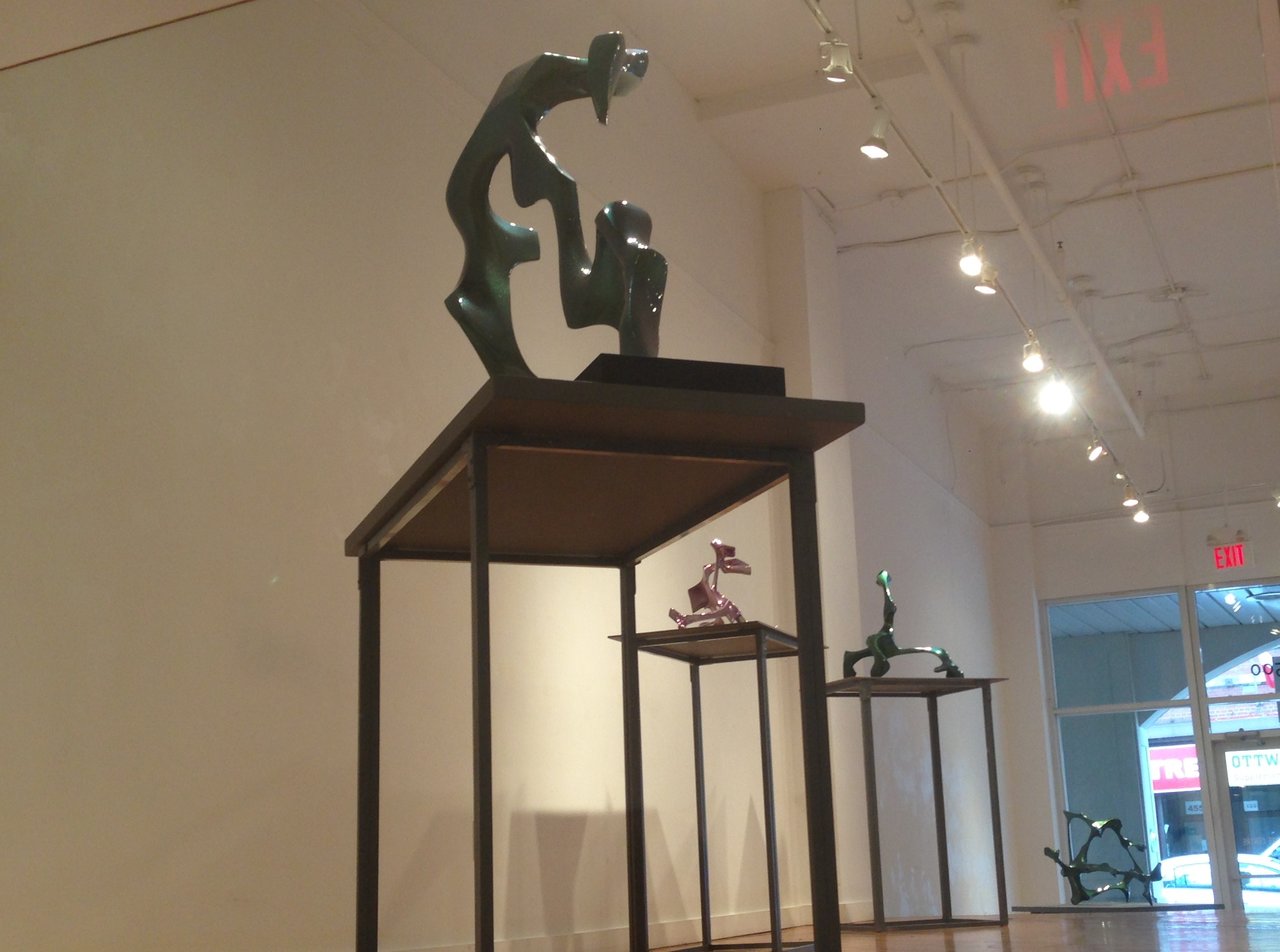 Oliver Tiura is a senior Canadian sculptor, a former professor, with more than 75 solo and group exhibitions to his credit in a variety of countries. Tiura gets excited by certain streams of outsider arts. Here in this show they reflect lines of mythologies from ancient Egyptian times [animal heads on human bodies], to fantastical creatures of the Greek mythologies, even to the fascinating “animals” described by explorers 500 years ago with visual interpretations of unbelievable, surreal, chimeric combinations seen in the works of Hieronymus Bosch. 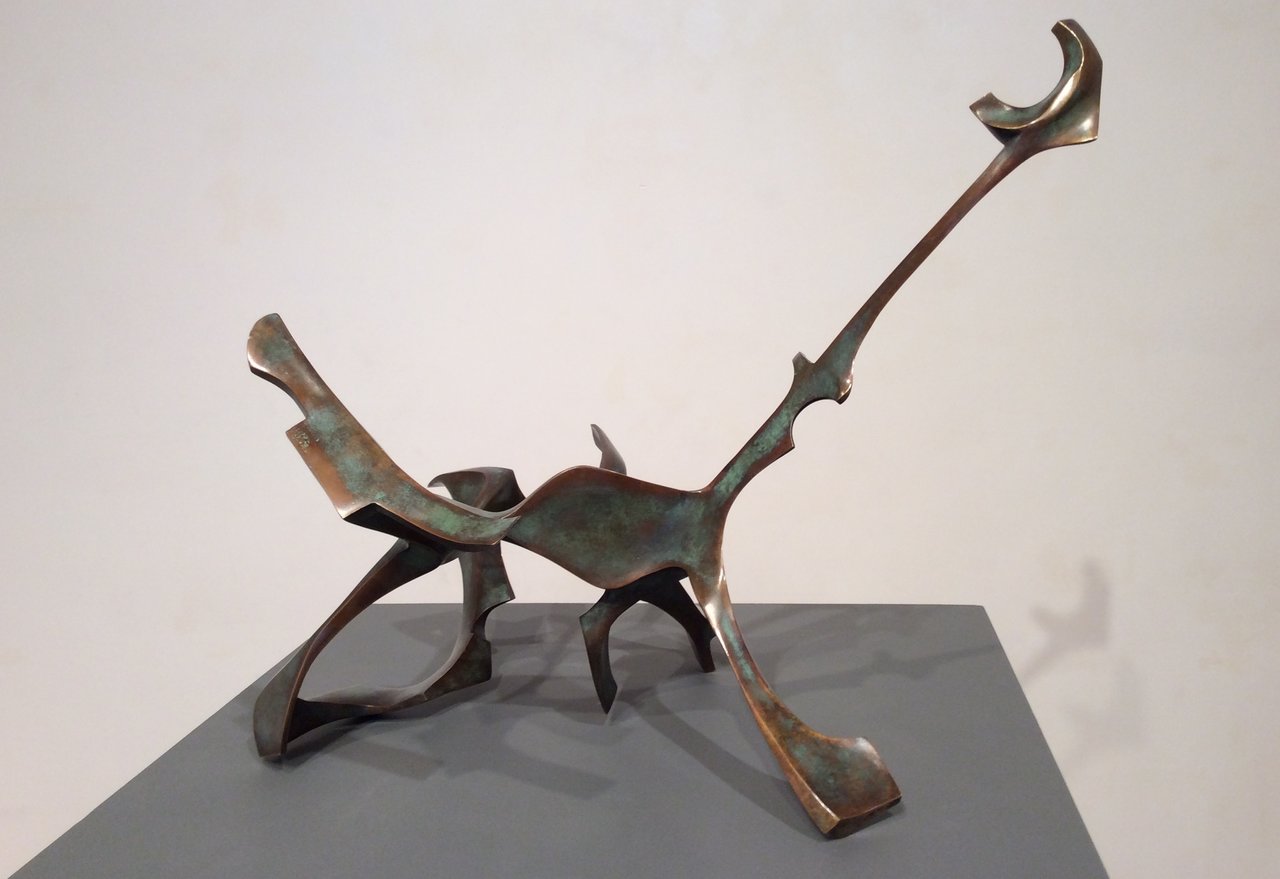 The abstract configuration presented in each sculpture gave the viewer infinite space for perusal and imagination. Whether or not it could be a fusion with skulls, bones, or even a single magnified cell molecule, the monstrous compositions provide us with ambiguous interpretations when explaining the matter behind each work. Walking around each piece, through the changing perspective, a different impression is perceived each time. It is amazing to learn that each piece is able to stand with varying shape and formation. The lines are keen and the structures are intricate within each piece, yet – able to steadily stand on itself in several other ways, as the artist demonstrated. Details of the numerous junctions within each work are delicate and sleek and can be further defined as approached with a closer view. Viewing from a distance – density and weight resemble living creatures standing with vigor and firmness. All the different elements and parts are indicating contrasting directions with resilience that might resemble an active cell molecule in a certain way.

Most of the works were produced in traditional bronze while several other large pieces introduced creations using the 3D printing technique, finishing with a patina on resin. The majority of the larger pieces were cast in bronze. The artist initially came up with a prototype, then this original work was sent to the foundry for casting in bronze – finishing with a final patina to bring out the variation of colours coating on each work. The pieces were proficiently made flawless; each has a particular and surreal pattern. The others are produced with the 3D printing technique, a new process that required tedious detailed scanning and also lengthy and arduous. “I wanted to ensure my pieces reflect the two main principles of additive manufacturing: reliability and archival, large-print size,” said Tiura. With the knowledge that artists in Europe have been experimenting with large-scale 3D printing, he researched his local options, only to realize that many were cost-prohibitive and focused in industrial use. Tiura came across Sheridan’s CAMDT, home to a Fortus 900, capable of printing with bronze in his desired size. The staff of CAMDT assisted Tiura with materials selection, file enlargement, structural support design and the finishing process. It was a learning exercise in innovation and experimentation for all parties involved, creating ground-breaking sculptures. 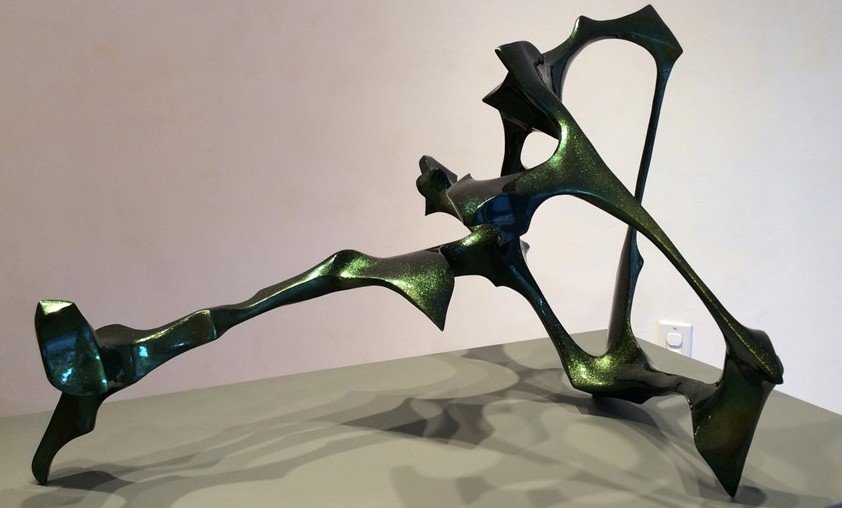 One of Tiura’s work, “AMISTAD v. 2”, a bronze, is slightly more distinctive than the others, consisting of cubist elements, with rectangular and curvy parts, having a more acute and linear outline. It somehow resembles a standing reptile, with wide open wings, a dropping head with two giant antennas and legs like a pair of tongs. It is eye-catching at first glance and stands out with its lighter opaque finish and resemblance of mechanical forms. In contrast with the other sculptures in the show, this is a heavier configuration, enhanced with a lighter pale green patina, that makes it noticeable and different, rather than fuse with the other works. 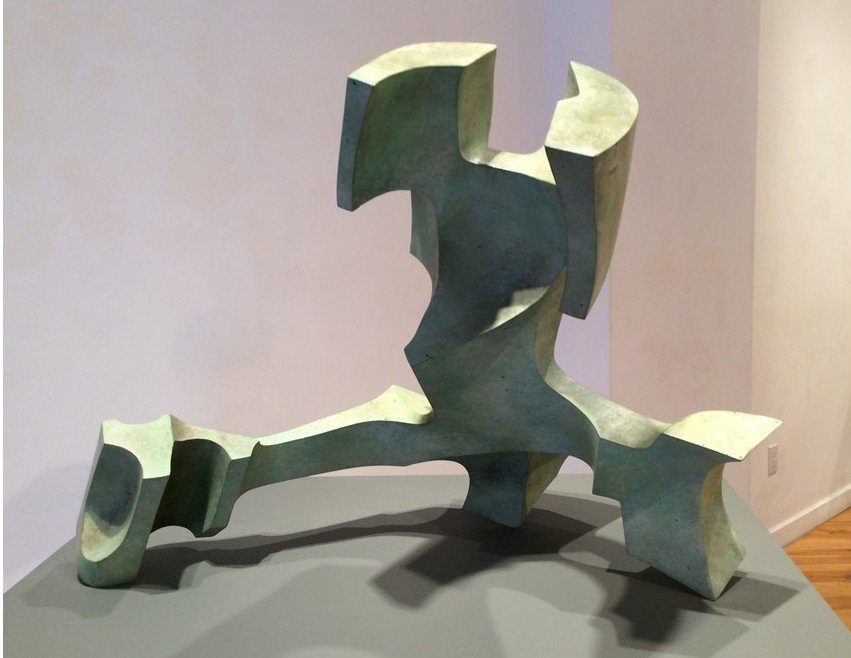 Another intriguing piece is “CHIMERA”, a 3D-printed piece, with one part sticking out and pointing upward. It reminds me of a wild animal that is crawling somewhere decisively, its neck is stretching forward and its four legs spreading out in order to hold its lengthy upper body. This piece seems to be easier to read and is less complex compared to the others. The polished exterior adds an imagery of a serpent, if one is looking for another perspective. 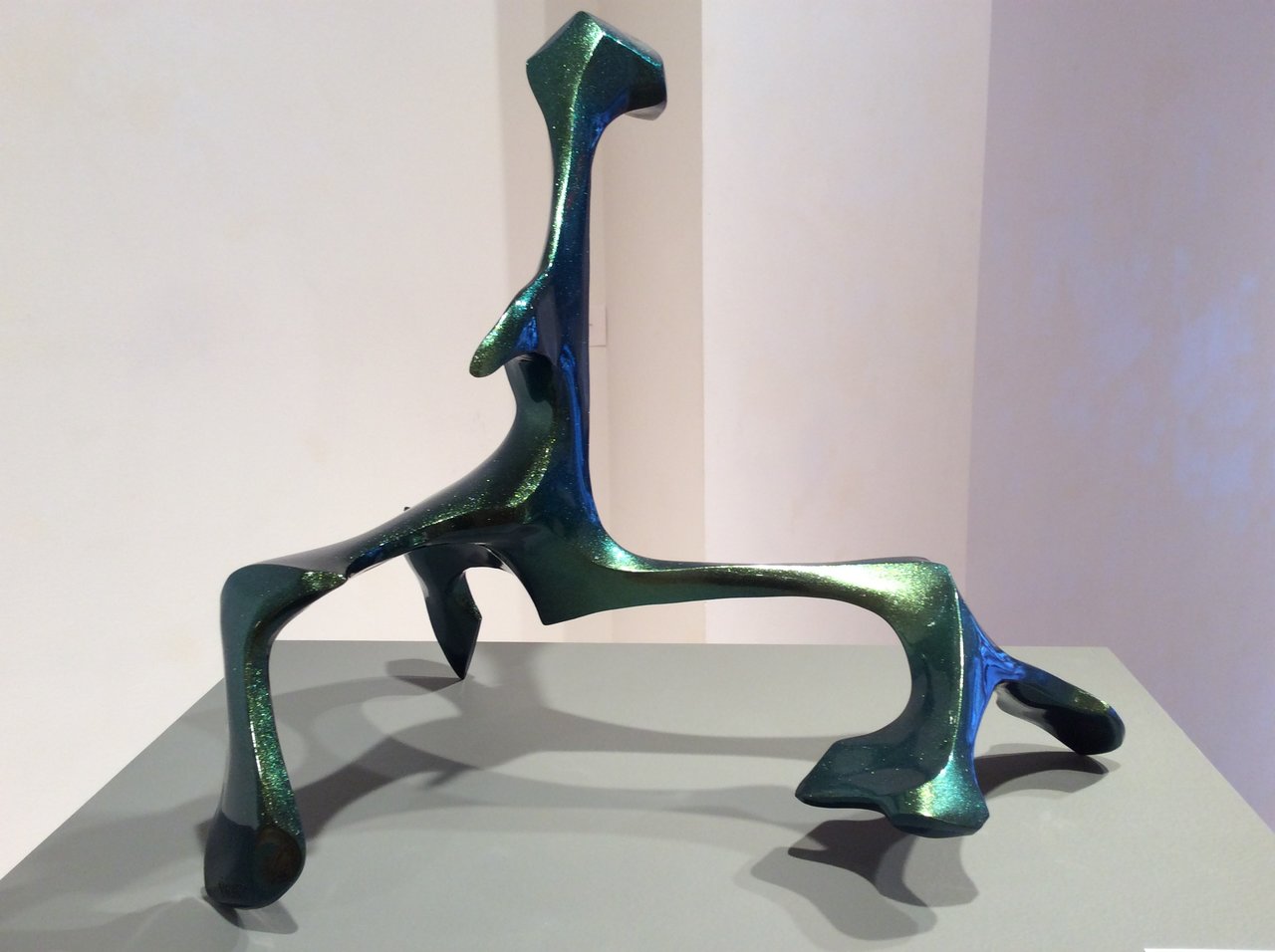 As the famous Mexican sculpture Federico Silva wrote: “Tiura’s sculptures are like reptiles that gasp on earth, moving about at the same time within their molecular space endeavoring to expand, rise up and breathe, as if they were a synthesis of a conflict between earthy and aerial forces, between solid rigidity and elasticity. They seem to rise up heavily, almost painfully, the weight of their arms struggling against gravity, their erect posture a triumph of will, since they have emerged from the earth in order to be free.”

The exhibition is worth a trek to Church Street to view Toronto’s first large 3D-printed sculptures! A changed version of this exhibition will begin at noon on Friday, July 22, where the sculptures of the exhibition will be manipulated into radically different configurations, viewed from three different planes, thereby archiving changed views with each turn, offering new insights and viewpoints each time. Its a wonderful opportunity to go there, meet the artist and witness those changes.