Jim Reid’s chaotic brush strokes enable atmospheric renderings that are especially provocative when slowly approached from a distance. His representations aim to convey the tensions of space in time. The contentious theme of land use becomes a conversation about conservation and development. To communicate the interaction of natural and human histories, he employs the method of onsite work derived from late 19th/early 20th century Plein Air painting. Peel Plain Farms, a locale northwest of Toronto, is a historic agricultural area facing development. This series presents the transience of nature, the uncontrollability of space; nature’s fragility and resilience, order and chaos. Up close his work appears to be energetic, chaotic, magnetic brushstrokes that interact and exchange. From afar his work becomes cohesive representations that recede in space. 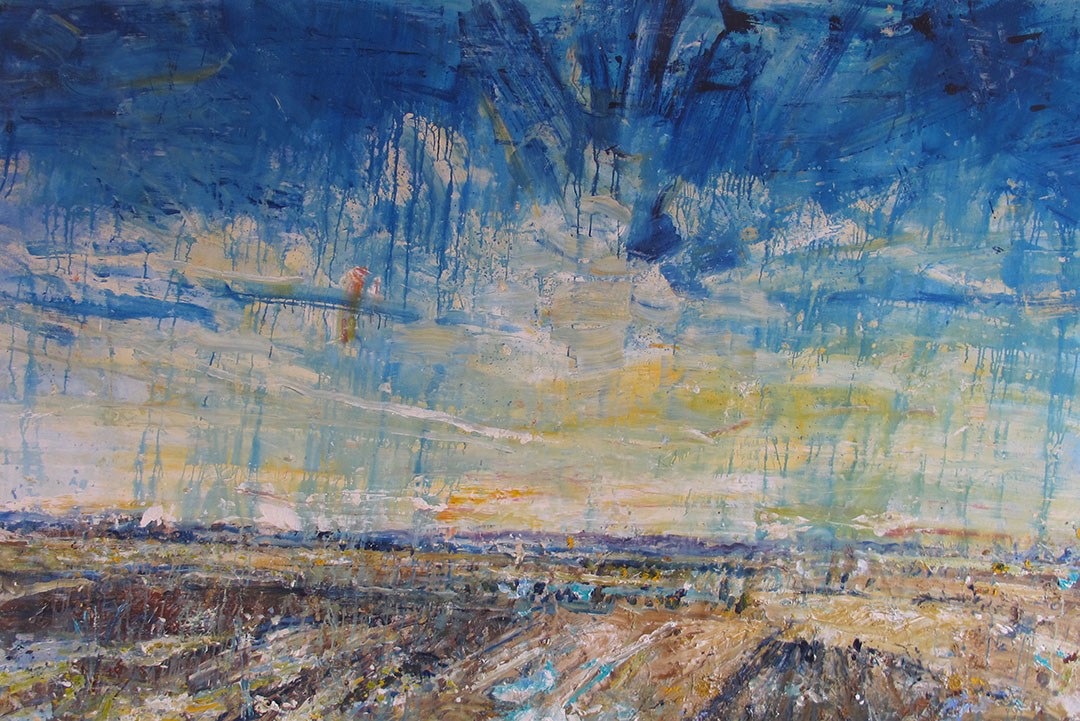 NT: How does changing atmosphere and weather influence your work? Can you expand upon your process of Plein Air painting? Are the artworks in their entirety completed in the outdoors? How does this method influence the outcome?

JR: For centuries, Western culture and science have sought to demystify and control nature. Today, no corner of the earth is unaltered by technology, yet nature remains beyond our control, infinitely complex and enigmatic. The fragility and resilience of nature, its order and chaos fascinate me. As a plein-air painter, I seek a complete involvement with the site. Working outdoors on the land, I am immersed in the vagaries of wind, rain, snow and sun. Depending on the site, I may also be buffeted by passing transport trucks or tormented by black flies. Plein-air painters believe that these various sensations of experience can be translated through paint. Many of my paintings are small-scale studies, which are easily transported and depict the landscape with immediacy. I also work on a monumental scale, which presents different challenges. Earlier work from my “Terraforms” series was based on fibreglass casts of the forest floor or Canadian Shield granite. These panels could be constructed on-site and left outside for many months during the process of work. Paintings from the “Forest” series were painted within hiking-distance of my studio, and plywood panels or stretched canvases were portaged to the sites and remained there during the painting process. The “Peel Plain” sites are more public, on roadsides or the edges of fields, and so must be more mobile. I may carry sectional panels tied to the roof of my car, or just unroll a large canvas directly onto the ground. 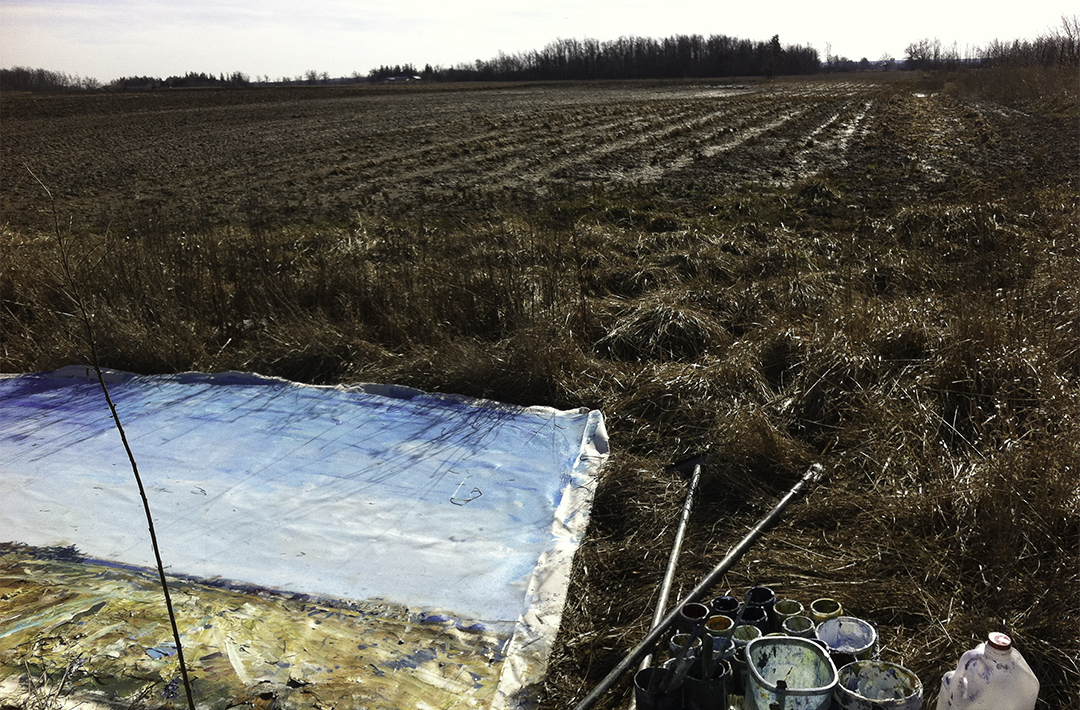 NT: Your work is rooted in real landscapes. Do you aim to convey a layered composition of different moments in time simultaneously? How long does it take to complete a piece?

JR: The large paintings may take many months to complete. I often have several works in progress, and may move them to different sites during their development. The final stages of work are completed on a single site and day, and the works are titled by their completion date and location. The completed work is layered with place and time, be that from dusk until darkness, or through seasons. I use watercolour or acrylic paint, both of which are affected by temperature and humidity. Random “paint events” are allowed to occur, influenced by both the climate and the nature of the materials.

NT: Your work thematically deals with the collision of nature and mankind and the result reveals many dichotomies. What is your personal opinion about urban expansion and humans’ lack of knowledge about nature?

JR: On a trip to the south of France a few years ago I was struck by the respect shown to the history of landuse. Ancient towns were continuing to expand, but within boundaries and with architectural consistency. The agricultural land between them remained intact, revealing topography dating back to the Middle Ages. In North America we have held to an expansionist mentality, and we are spiritually poorer because of that. 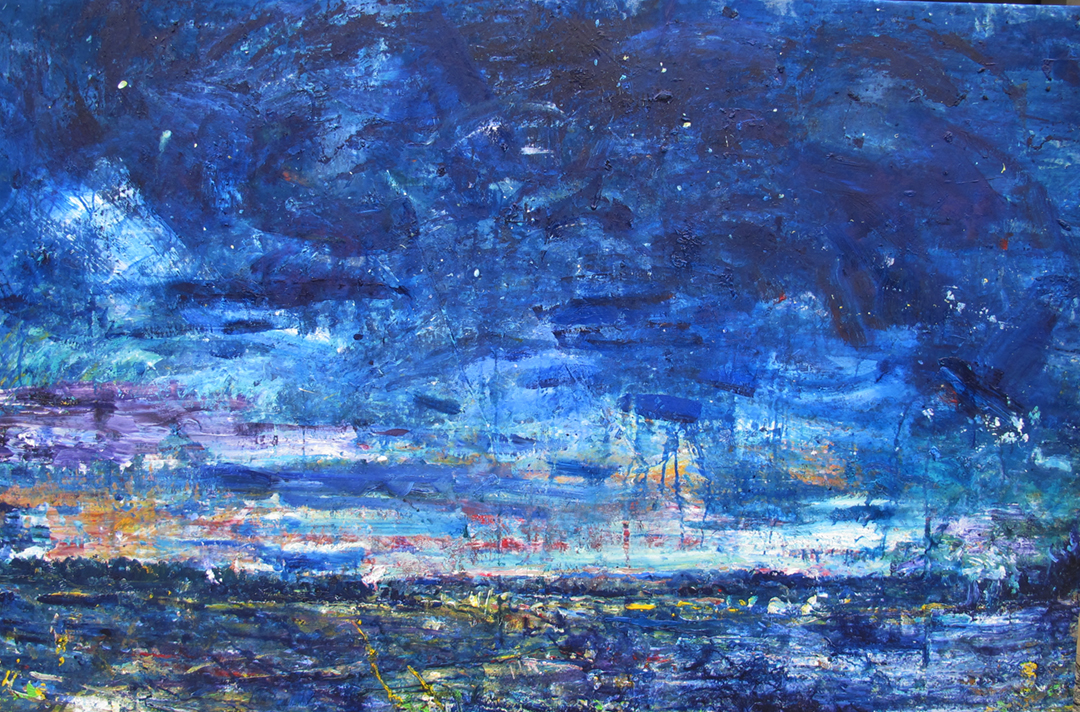 NT: Will your future work also deal with the consequences of urban expansion?

JR: The work is part of an ongoing observation of the Peel Plain. The Peel Plain is a historic agricultural area north-west of Toronto, defined by Brampton to the south and the Niagara Escarpment to the north. It’s farms reveal a time-layered working of the land, many going back 5 generations. Small sections of woodland date back to the pre-colonial era, when the land was part of the Mississauga First Nation. I have a long familiarity with the area, having frequently travelled through it since the 1960’s. My present studio is just north of the Peel Plain. From 1999 to 2002, at a time when I was working in Toronto and making a daily commute from rural Caledon to the GO station in Brampton, I created a photographic archive of over 2,000 images of the Peel Plain. These were panoramic photos taken from a moving car using a low-tech camera. They documented the transition from rural to suburban land-use at a time when the recent expansion of Brampton was just beginning. A selection from the series, titled “Marginal Lands” was shown at Lonsdale Gallery, and is now in the collection of the Peel Art Gallery. The work in “Field of Vision” revisits many of the sites photographed in “Marginal Lands”. Many other sites have since been built-over. I plan to continue painting and drawing in the Peel Plain in the years to come.

2 comments for “Jim Reid: Field of Vision at Lonsdale Gallery”