On Saturday November 19th, I spoke with artist Lumír Hladík about his Gargoyles exhibition, which is currently being shown at Walnut Contemporary. Situated in a reimagined church space, this multimedia installation serves to define some of the arbitrary lines that we, as humans, have drawn out for ourselves.

JF: First of all, I would like to ask you about these gargoyles. Themes from the Gothic and Baroque periods have pervaded some of your past works, but these are obviously not the same gargoyles that we might see on the side of a cathedral; what gave you the inspiration for creating these new types of gargoyles?

LH: Well, its like I said in my artist statement: this exhibition is meant to be a frenzy of biology, history, philosophy and religion. Historically, gargoyles were seen as evil, beastly creatures that represented the opposite of the human ideal. Religious scholars then extended this argument, deeming all animals as lesser beings that do not posses a soul like humans do. However, scientists have now proven that we do in fact share some DNA with animals; there are even certain genes that we share with the housefly. But, when you try to tell someone this – that they share some of their DNA with houseflies – they deny it completely, instead telling you why it is that humans could never share DNA with a creature like that. By calling an animal dirty or beastly, they are creating these arbitrary boundaries that help to support their irrational way of thinking. 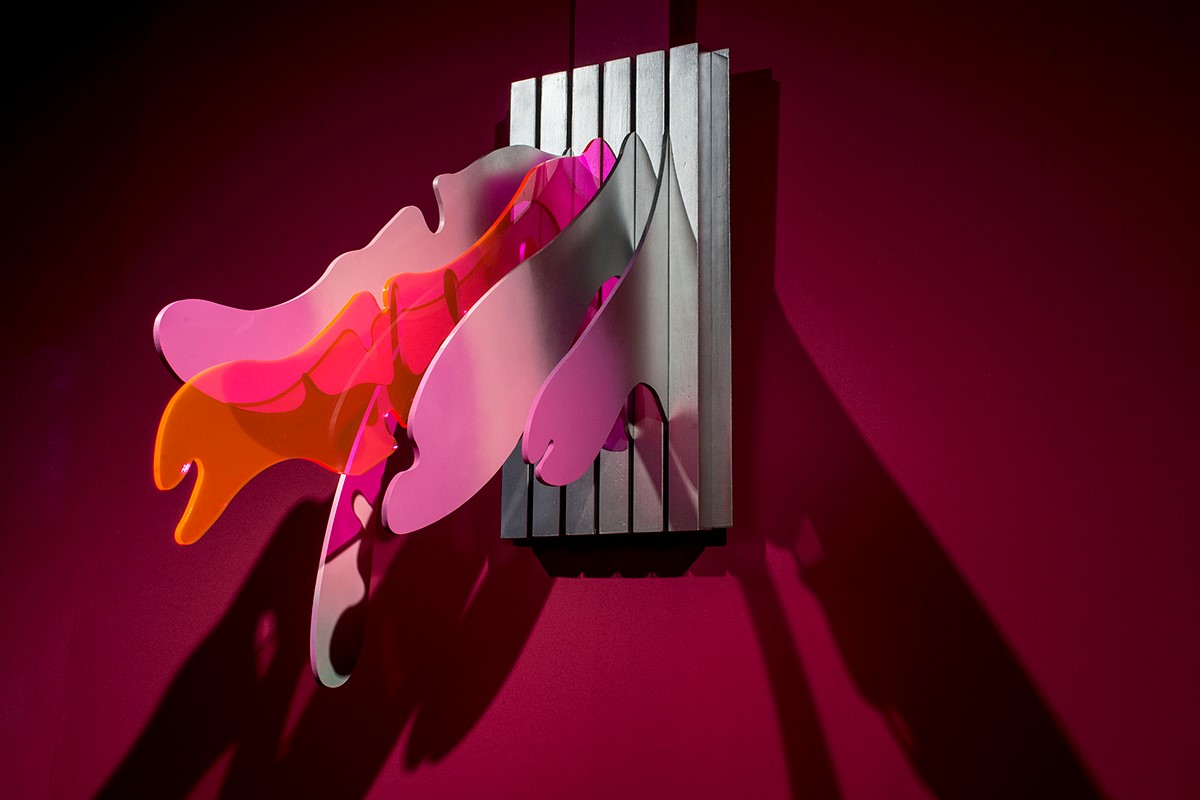 The same goes for the doves and pigeons that I have included in this work: in the video installation, there are two doves that have entered into a fight with one another. We normally think of doves as symbols of peace but here, they are engaging in an act of violence. This may put off some people but in reality, what they are doing is entirely natural. This shows that the way we think about things is entirely arbitrary – on one hand, we have these beliefs that fit neatly into our understanding of the world but on the other, there is a reality that directly confronts that understanding. Many people choose to ignore that reality and instead try to justify their way of thinking through their own irrationality. The gargoyles serve as examples of the fact that this irrational thinking has been embedded into our culture, our religion and our language.

JF: Your artist statement touches on a variety of disciplines; is that why you chose to engage with such a wide range of mediums in this exhibition?

LH: I wanted to show how these things are all connected. By using all of these materials at once, I am able to make a statement that touches on many different subjects. Everything that went into this show, including the music and the curatorial essays, helps to strengthen this interdisciplinary approach.

On the opening night we played music by Jacob Soma of the Toronto-based alternative group Programm, and also had award winning soprano Alessandra Paonessa singing over this music. This is what I like to do; bring things together that people may not always associate with one another.

JF: How does this irrationality that you seek to represent fit into the world of science, where everything is based entirely on “being rational?”

LH: Do you know Ken Wilber, the American philosopher? He uses the term “Flatland” to describe how this works. Basically, what this term means is that science can only explain what it is given at a certain point in time. For example, in the 13th century people believed that the Earth was flat and that was a completely legitimate belief, because that is where science was at that time. But today, everybody believes that science has actually conquered the Earth and most of the universe, so we see ourselves as having a totally rational view of the real truth. But this is absurd, because many of us do not actually understand much of the science that exists today; we simply tend to accept things blindly, which doesn’t make us any better than the people who lived in the 13th century.

The point of the Flatland is that somehow, this renaissance of rationalism that we have lived in has brought us backwards instead of forwards. In a short period of time, such huge leaps were made in our understanding of the universe that it became so complicated that nobody could understand it. I remember an article that I read just after they discovered the Higgs-Boson particle; about a third of the way into this journalist’s explanation of how it worked, I began to swoon. I simply could not understand it. Things have become so complicated that nobody can understand them and so people just cut them off, which in turn makes them go from rationality to beliefs, and to myth.

It’s a very strange world that we live in; we have more science than ever and yet at the same time, nobody can understand it. This is the irrational world that I am trying to demonstrate here.

(Hladík then ushers me towards the altar that he has constructed as one of the centerpieces of the exhibition, pointing towards two small glass domes that each contain a cross and a dragonfly.)

You see these glass containers? They are perfect examples of this irrationality. Those porcelain crosses are used in the baptism of children; and after the baby is baptized, they receive them in commemoration. However what nobody remembers is that the cross, which is one of the world’s symbols that universally recognized, is in fact a symbol of torture. Some people that I speak to will try to justify this and place it into a different context, but the fact remains that it was invented to make people die very slowly and in pain.

JP: Many people don’t even tend to think about the fact that crucifixion was a common punishment long before Christ came into the picture.

LH: Exactly. People forget these things in the same manner as the citizens depicted in George Orwell’s 1984; after being told so many times that their enemies are their friends and that their friends are really their enemies, people tend to forget the underlying truth. People have now forgotten so much that these crosses have become mass-produced objects meant for babies, when in reality what we are doing is rewarding these children with a symbol of death and torture. Another layer of irony comes from the dragonflies that are mounted onto these crosses – the dragonfly, which has been a very successful creature for over 300 million years, is also shaped like a cross. Yet they have crucified no one! That is a true innocence, not a cross.

JF: You mentioned before this interview that during your childhood, you found some sort of solace in the churches of Prague. Why did you choose the setting of a church for this piece in particular?

LH: Well, the influence that it had on me, and on a lot of other people I’m sure, came from the beautiful art that is contained within these churches – the altarpieces, the ornaments, everything. To me, churches are buildings that celebrate the universe. And usually, the art contained within them is so great because the artists were pressured by the elevated purpose of it all. Therefore the church to me is the ultimate place to celebrate life, even when it is removed from the context of religion. The life force present within these churches is a non-manifest, spiritual god rather than the manifestation of the one that we normally think of.

And actually when you think about Gothic, everything is nature. Gothic is basically barbaric German art, which is based on the forest. The canopies, the tree trunks; they all have counterparts within the church. The Italians called it barbaric because they thought that the divine country was in a garden, whereas the German’s recognized this divine force as existing everywhere in nature. Baroque is the same – branches, leaves, fruits – its all focused on nature. So it’s really just full circle; the church serves to represent this sort of life force that exists everywhere in nature.

I was in Temagami this year doing a very intense canoe trip; we even had a float-plane drop us off in the middle of nowhere. And in all honesty, it was simply divine. I could feel and smell god in there, among the rocks and the trees. To me, it is the same impact that I feel when I stand in St. Jacob’s Cathedral in Prague.

JF: Would you say that the unknown excites you? It seems as if you are making a general statement on the arbitrary nature of truth and knowledge, and so I would assume that the unknown might intrigue you.

LH: Yes absolutely, I love that we do not know everything. In fact in my early work, I tried to create new ways of not knowing – new mysteries. I didn’t want to discover it all; instead, I would just open the door and not look inside.

JF: Why, in this work, did you choose to bring nature inside as opposed to going out into nature like you do in your work with the black bears?

LH: I think they both serve different purposes, and so I like to do a combination of those things. These installations, which I call vanitas, contain some of work that I do with black bears. In fact, some of the tubular pieces in this exhibition even contain some black bear fur. Therefore I do not really see these two practices as separate; I can use both to convey my ideas.

To me, all great art has a lot of layers, which you don’t necessarily see on the first go. Today I see a lot of art that I would call “Aha! Art” – pieces that can be immediately digested and understood by the viewer. You see it, and you’re done. But having layers in your art is like reading Hemingway, or Kafka, or Mark Twain or even go back to Jonathan Swift’s Gulliver’s Travels. Some of these books are hundreds of years old and yet today when you read them, they do not seem any less relevant or applicable. That is great art, and it is the reason why I try to put so many layers into works like this. You may only get two or three of them the first time, but it only goes deeper and deeper.