Commemorating Canada’s 150th Anniversary, artist and curator Kent Monkman presents an evocative, humorous and deeply heartfelt exhibition entitled Shame and Prejudice: A Story of Resilience. In nine distinct “chapters,” Monkman rewrites Canadian history through a First Nation’s lens, shedding light on the atrocities of starvation, residential schools, sexual abuse and poverty. He utilizes a variety of artistic media – including painting, print, and installation – to critique colonization and place the Indigenous population in an appropriate historical framework. 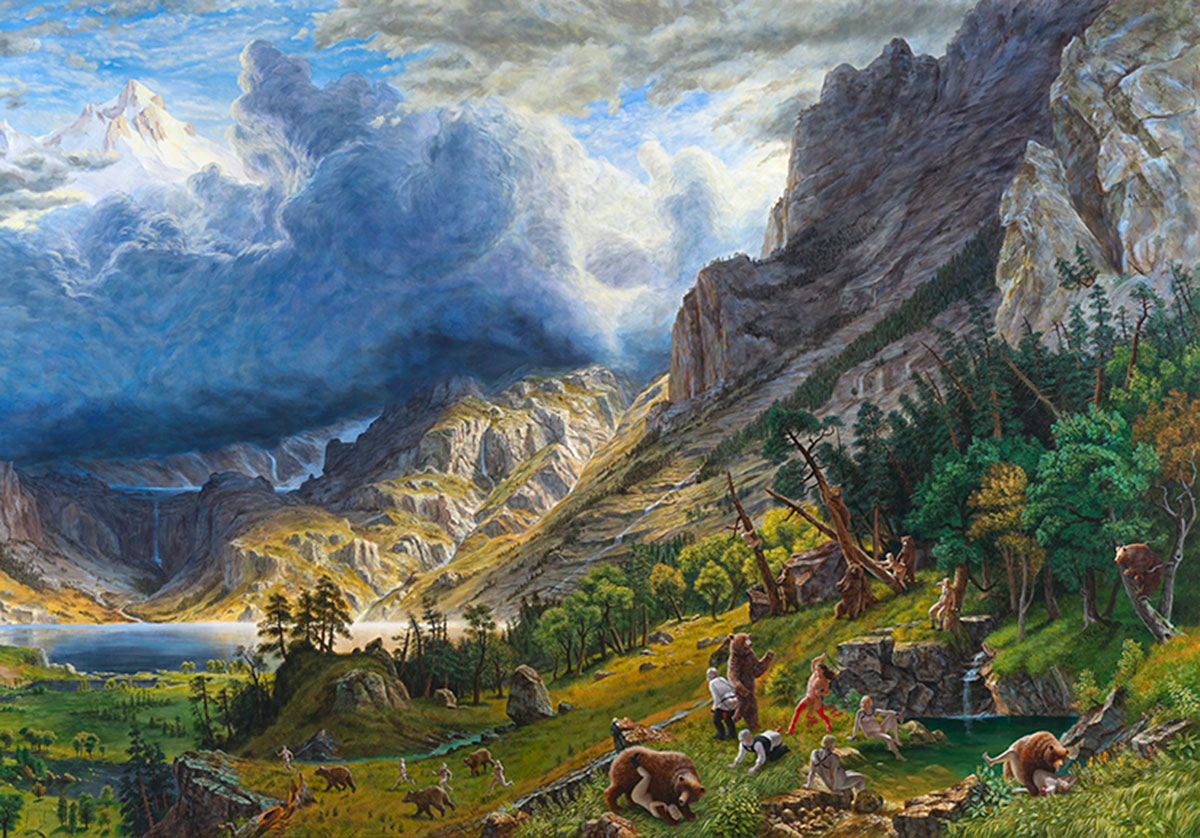 Monkman’s artistic prowess lies in his ability to combine art historical references to contemporary history, he explains that “the last hundred and fifty years in Canada are concurrent with the rise of European Modernism and the emergence of Modern Art.” Le dejeuner sur l’herbe  is one of Manet’s most famous masterpieces depicting two bourgeoisie men lounging with a naked woman on the shore of a river. Monkman borrows the title and the prostitution theme and recreates the scene with a cheap hotel in Winnipeg with female nudes in the foreground. The expensive car parked on the side of the road perhaps implies that there is a man upstairs. The second layer of art historical reference is in the female nudes themselves, which are styled after Picasso’s cubist Les Demoiselles d’Avingon. In the foreword to the exhibition, Monkman compares Primitivism to the diminishing culture and languages of the Indigenous peoples due to residential schools. 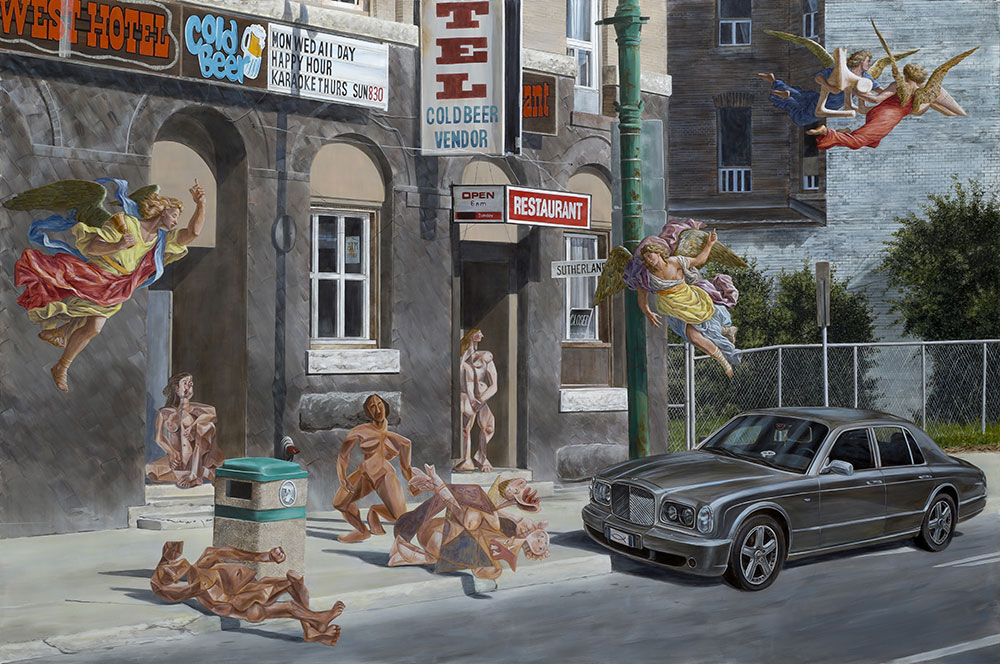 The installation Scent of a Beaver continues on, cultivating a relationship between Modern Art and Indigenous history. Inspired by Rococo artist Jean Honore Fragonard’s The Swing, Scent of a Beaver portrays Miss Chief Eagle Testickle swinging between a French and a British man. This is a metaphor for the balancing of relations between the French and the British, who both wanted a monopoly in the lucrative fur trade industry. 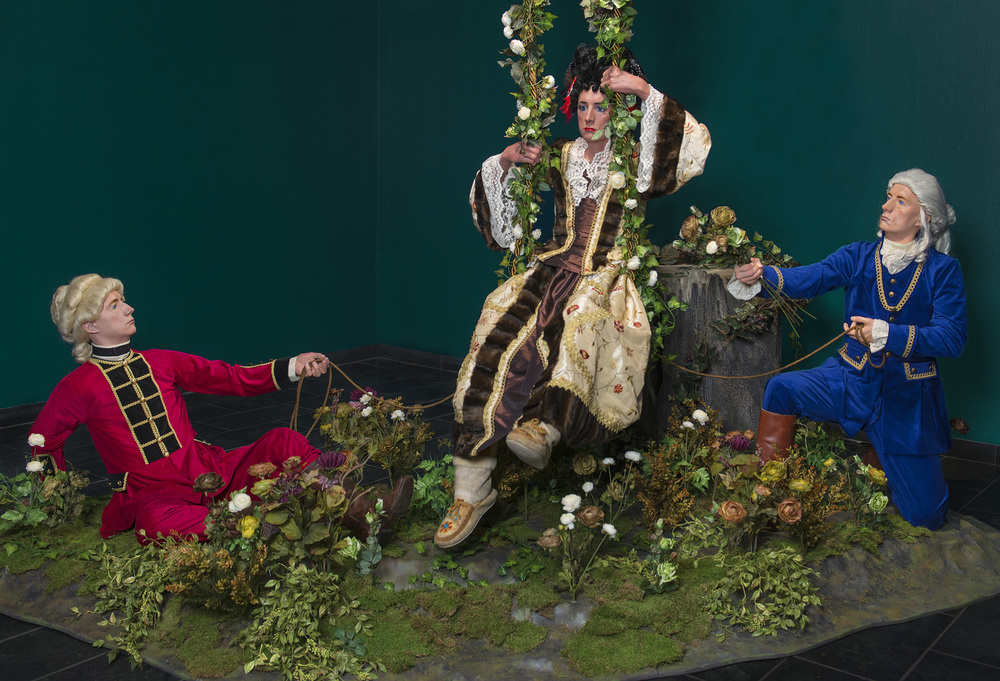 Kent Monkman, Scent of a Beaver, 2016, mixed media installation. Courtesy of the artist

Miss Chief Eagle Testickle is a recurring character in Monkman’s work. In the painting The Subjugation of Truth, she is hidden in a royal style portrait of Queen Victoria in the background, juxtaposed with the shackled native chiefs who are having their freedom taken away from them. The minister and officials seem to be fully engaged in the creation of a treaty, but the melancholic and silent expressions of the chiefs show that the matter at hand is not a negotiation at all. 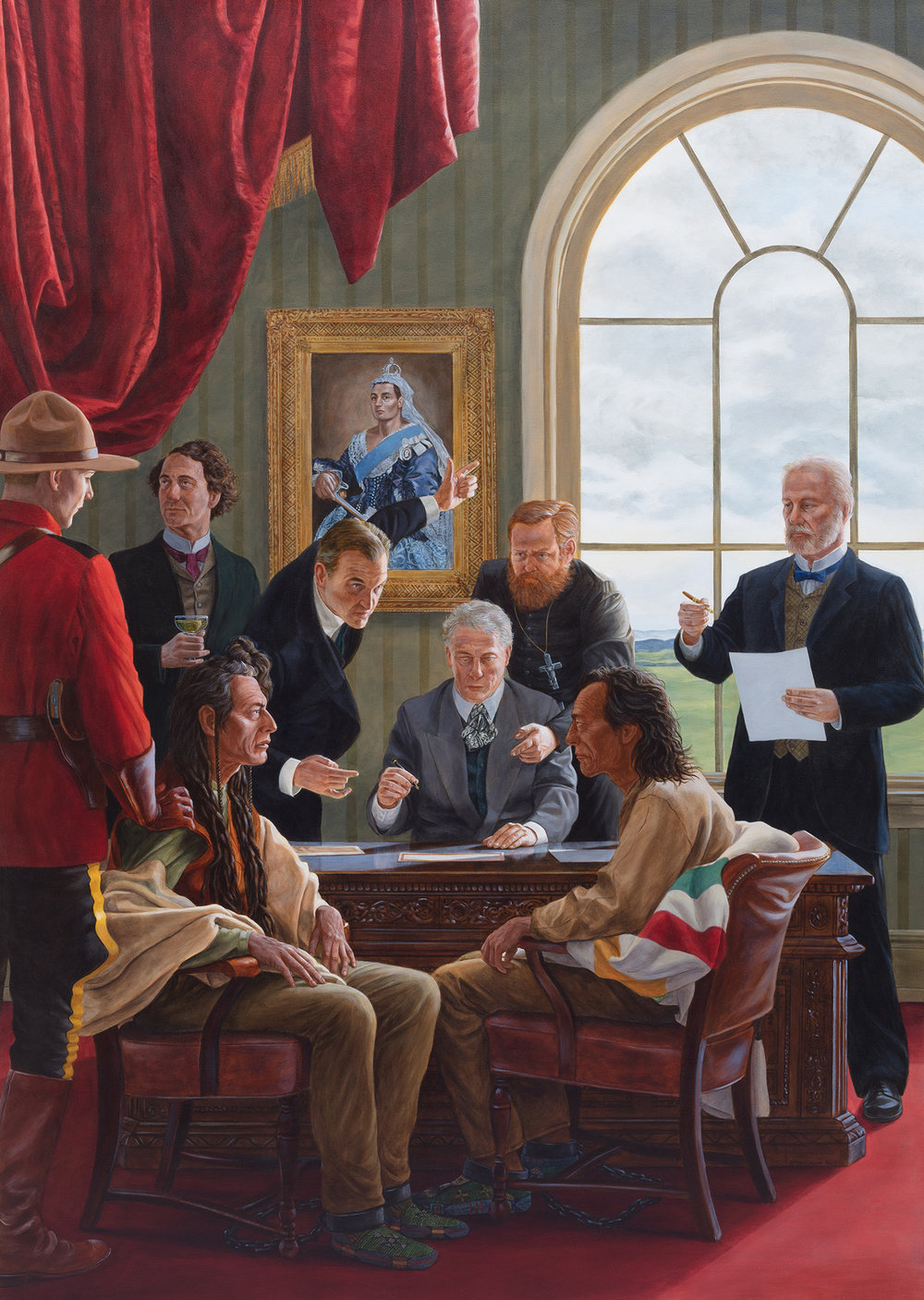 Miss Chief is the artist’s drag alter ego who bluntly embodies homosexuality and strength. Her presence brings a playfully sexual atmosphere and helps contrast heavy and tragic events. She is also present in the ‘negotiation’ meetings depicted by the painting, The Daddies. The beautiful young man in high heels, sitting naked on a Hudson Bay blanket, is in the centre of attention of fully dressed men, politicians, law makers or other men of importance, who established the state of Canada. This meeting takes place in the same room as The Subjugation of Truth – but it is seemingly Miss Chief who challenges the audience, who has the upper hand, in the process of rewriting history. 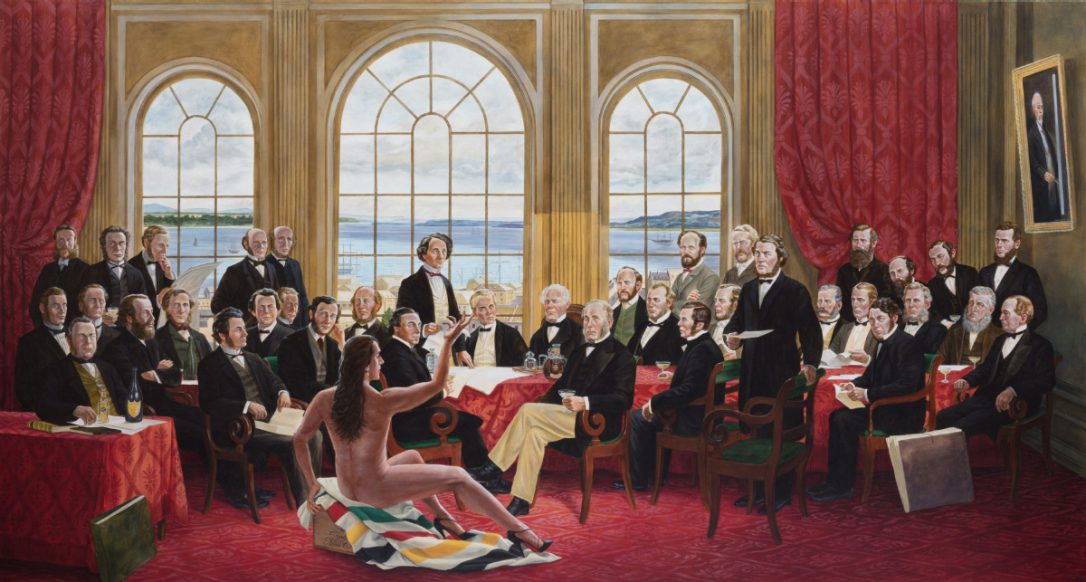 Miss Chief is totally absent from the works that pertain to children being taken away to residential schools. At the beginning of the exhibition, there is a nativity scene installation featuring two men praying over a newborn child. The references to western corruption are easily noticeable – specifically on the Hudson’s Bay blanket the child is laying on – but what is more interesting is the background scene. If you look closely, you can see four small figures – a nun, a policeman, and a mother and child. The nun is pulling the child away while the policeman holds the crying mother. Residential schools are one of the central themes of Monkman’s paintings. 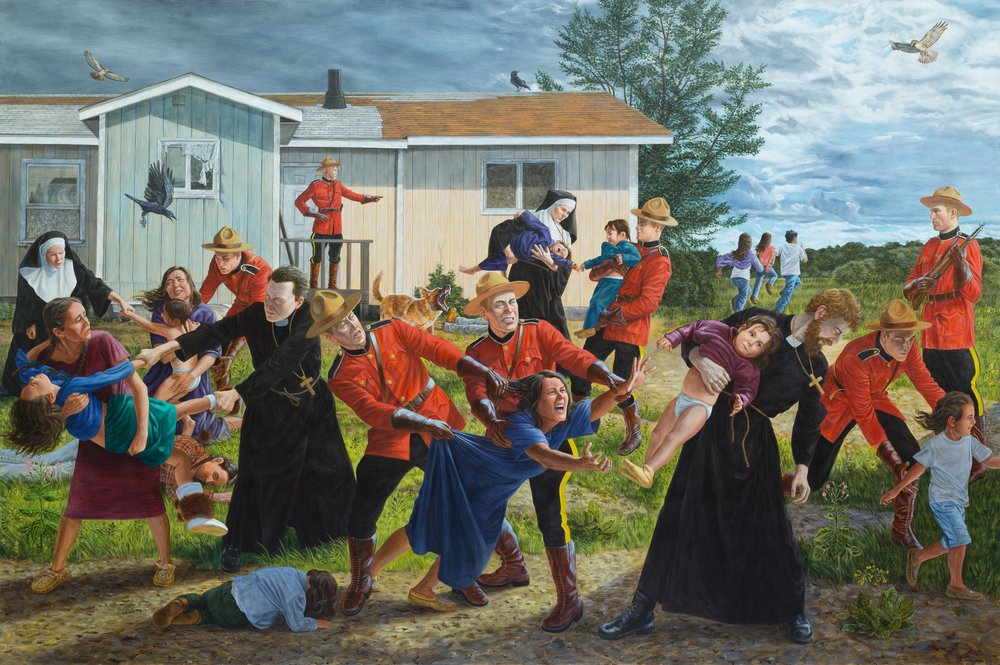 The Scream is placed in a dimmed room – a space that requires contemplation. The life size painting depicts the chaos of children being taken away from their loving families to residential schools. The facial expressions of the children and mothers evoke a sense of extreme sorrow and the composition is strikingly dynamic due to the push and pull actions of the various characters. The scene creates an aura of hysteria, violence, and absurdity. According to Monkman, it was only the 2015 report form the Committee of Truth and Reconciliation that brought attention to the trauma of the native children. His own grandmother, to whom the exhibition is dedicated to, suffered through this kind of trauma and inspired Monkman to highlight those obscured events of Canadian history.

Monkman’s technical attention to details juxtaposed with broader, contemplative themes produces a one of a kind exhibition. Great paintings always provide new knowledge and perspectives – Shame and Prejudice accomplished just that and leaves the viewer’s mind fully occupied with questions about history and truth.

** Note: The exhibition will tour across Canada in the coming years.