In 1986 Frank Stella published his book Working Space, in which he supported the sustainability of modern, abstract art through the creation of its own autonomous space. In his eyes, the creation of space was art’s primary purpose and it was the role of artists to find new ways of creating and depicting this space, even in the post-Barnett Newman world of the 1970’s. Today, Leopold Plotek – whose career has been based out of Montreal since the 1960’s – is upholding this interest in space. In his first ever retrospective at the Koffler Gallery, Plotek exhibits three series of paintings, each of which serve as thematic and figurative snapshots of a certain time in the artist’s career. In No Work, Nor Device, Nor Knowledge, Nor Wisdom, we are presented with the works of a mature artist who makes the viewer think in a way that is not easily defined. Plotek’s paintings are not immediately comprehensible but the pleasures offered by his refined visual language instill a desire in the viewer to return to them again and again.

Curated by Eric Woodley – who is himself a renowned Canadian artist and composer – this solo exhibition shows the work of a man who is constantly searching for something specific, but consistently finding something else. In a conversation between Woodley and Plotek, the artist spoke of the first trip that he took to Italy and the surprising realization that he came to while staying there: it seemed to him that he was more infatuated with Italian architecture than with the Italian art that he had sought in travelling there. This attraction to the villas and cathedrals of Italy inspired him to produce Il Frullino and Galgenlied, both of which recall the mathematical simplicity of the Roman arch. In these paintings, as well as in The Exilarch, it seems as though the artist is attempting to subvert our traditional understanding of perspectival space by creating a sense of infinite depth rather than establishing a definitive point of reference.

However, while Leopold Plotek is unquestionably concerned with the construction of space in his paintings, he is also very clearly interested in creating an experience for the viewer. In the exhibition’s second room, one encounters a series of historical paintings that were produced after the architecturally informed works of Plotek’s earlier years. While some of these paintings have been referred to as dark and obscure – something that the artist himself acknowledges – they also offer striking glimpses into the artist’s mind.

The concept of liminality seems to characterize these history paintings, as many of them depict moments between moments – that is to say, decisive moments. In The Death of Siseria, evidently a reworking of Palma the Younger`s painting of the same subject, Plotek chooses to represent the moment just before the hammer has fallen. When asked about the intellectual heavy-handedness of many of his works, the artist stated that he never meant for his subjects to be indecipherable but rather intended to provide the viewer with a complete description of the subject that inspired each work.

Shame also seems to be a key element of many of these historic compositions; in the painting At Uxetter Fair, we are presented with a solemn depiction of 18th century writer Samuel Johnson standing in front of the book-cart that his now-deceased father once owned. And in one of the newer paintings, titled Teddy and Benny, we are given a chance to glimpse into the racially segregated south in the 1930’s. The reds and blacks in this painting create a sweeping scene of dynamic movement that truly does recall the concert-halls played by 20th century band-leader Benny Goodman. The presence of a hidden figure behind the curtain serves as grounding but also makes the viewer to recognize the emotional and moral depth of the painting. 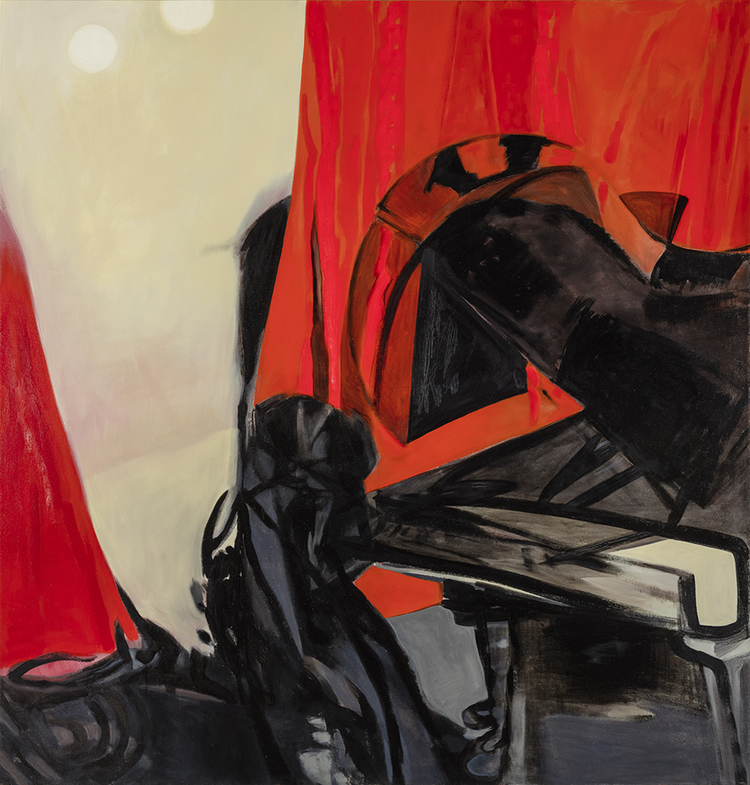 Nevertheless, Plotek does not see things in such one-sided terms. To him, painting is never just good or bad. During a conversation with the curator of the exhibition, Plotek was asked if he considered his artistic process to be an agon (ie. the greek word for struggle or contest). In response he chose to highlight the ludic quality of artistic creation, citing the game of chess: “When you look back on those great chess games, it is never one versus another; it is rather a complex dance. One could consider painting in the same way: it is not necessarily an agon, but there is certainly a definitive effort involved. It may be largely improvised, but you know it when you have it.” 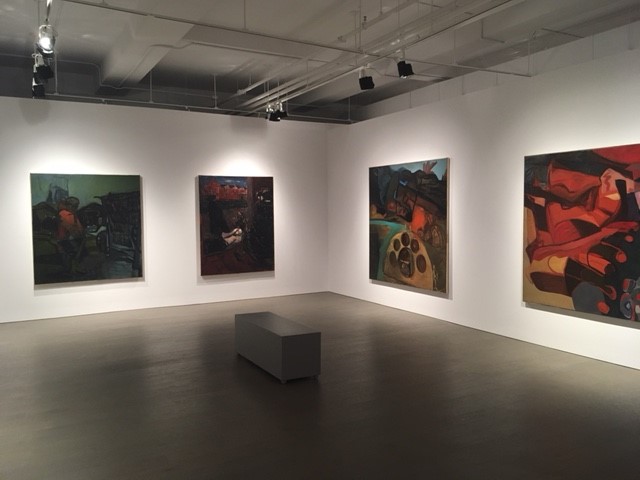 Installation View of  Leopold Plotek: No Work, Nor Device, Nor Knowledge, Nor Wisdom at Koffler Gallery, 2017. Photo: Jordan Fee