You never forget the students who consistently stood out in your fine arts undergraduate program. Within the context of the university, they were the superstars of your peers and contributed to the standard of excellence that became required of the whole class. This show titled York University Juried BFA Exhibition is a collection of these outstanding graduating students.

Upon entering the gallery, you are greeted by three considerably different sculptures. The first is Faceless, my Imaginary Friend by Malina Sintnicolaas, a ceramic sculpture of a long blue feathered beast with human arms and a forked tail. The creature is faceless, yet its body is directed towards the entrance as if looking from unseen eyes and ready to crawl towards the visitor. It doesn’t appear menacing, but instead curious or apprehensive. The work is rendered beautifully with its soft ombre colour pattern, the soft skin palettes, sculptural depictions of tendons and fingernails, as well as the use of glazes. 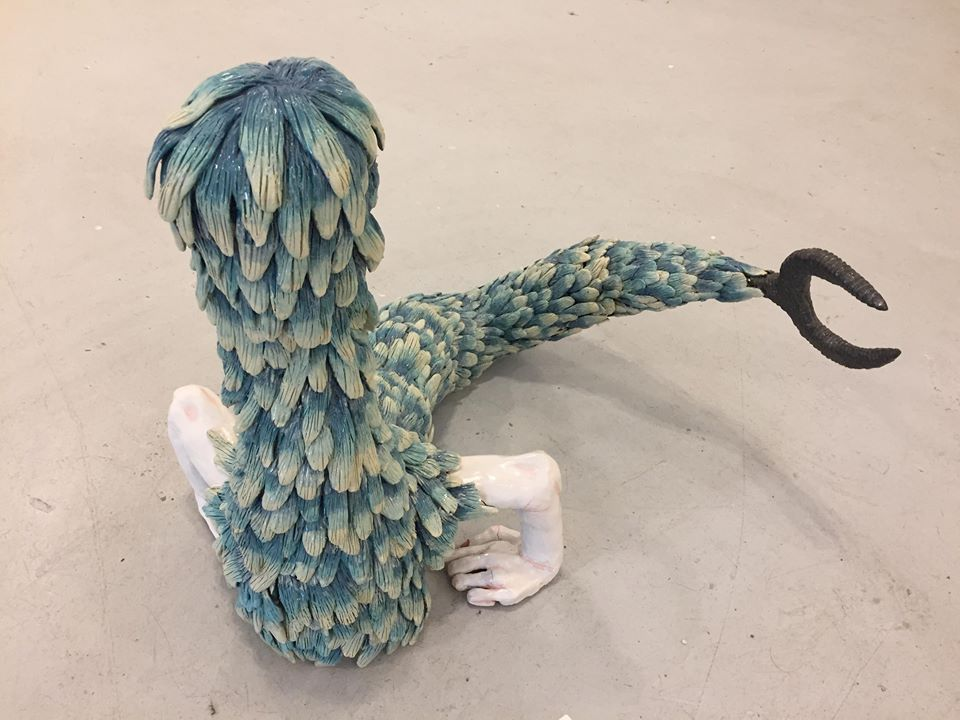 Not a Happy Ending by Alissa Leung is a mix of ceramics and found object to create a diorama depicting a scene from the Grimm Brothers’ classic fairy tale Cinderella. The first impression of the work is one of pure beauty, elegance and luxury. At a closer look we can see that the ceramic mice are not eating crumbs or cheese but severed toes. The classic juxtaposition of lavishness and the macabre within this fairy tale can easily be read as the violent nature of the bourgeois, when the slipper becomes a symbol for ascension into high society and no cost can be too steep to achieve it, even in this case, body mutilation. From a contemporary perspective, the symbol may take on as a representation of unrealistic beauty standards created by the media and the severed toes are the self-destructive actions people take to try to achieve them.

Punching Bag by Robert Warner is constructed out of steel and suspended by a thick black rope. While floating and harmless, there is an immediate visceral reaction evoked by the piece, where the understanding of the object is staunchly juxtaposed with its materiality, leaving viewers with an imagined pain in their knuckles. Ana Ghookassian’s Nothing-Again-Continued is a cotton rope dipped in a soft green latex paint and hung from a large roofing nail. An abstract and poetic work that seems to be inspired, as the title suggests, by a nihilistic ethos of perpetuation. Beautiful and industrial, the work seems precarious but also immensely strong and precise. 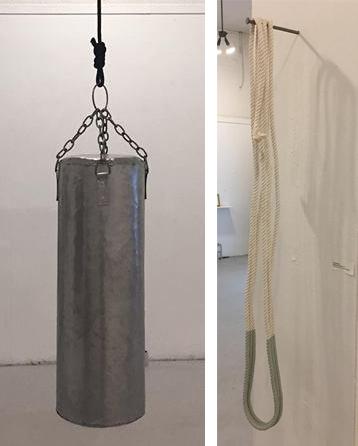 Looking at the pieces that hang from the walls Haley Cobran’s works, Prismatic, catch our eyes with their intense visual appeal. They are large scale inkjet printed photos of diamond gemstones intentionally crumpled, creating dimensions and ridges to imitate edges of cut and natural crystals. There is tension between the flatness of photography, the forms depicted within the photograph and the sculptural formation. Similarly, the refraction of light is emphasized, since the bends and folds of the work confuse the paths of light within the image while also catching the light within the gallery, casting a new set of shadows and reflections. 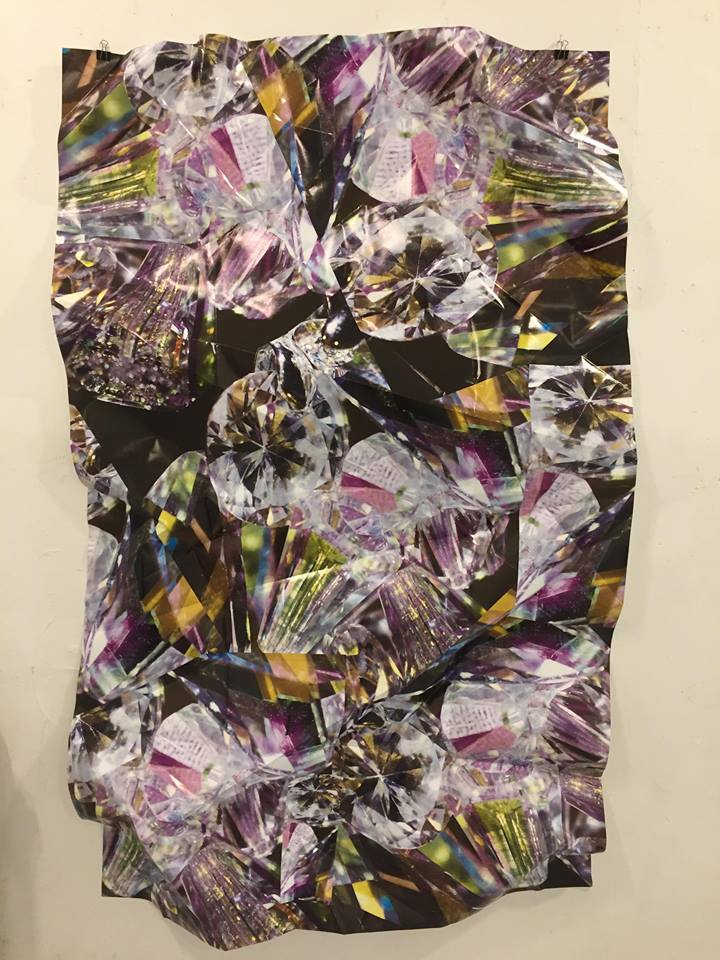 Laura Sbrizzi’s It’s Not That I Don’t Love Her is a soft-ground etching print of a body that seemingly pressed against an invisible wall overlaid with pink text. Even redacted through cropping, the text seems to be describing why the writer breaks up with his female partner. Combined with the impression of a woman’s body, the work evokes feeling of victimhood and the subjugation of women, since the text is the male ideal archetype of a 1950’s housewife. Outlook is four graphite drawings of a fantasy landscape by Sophia Goshulak. Each piece is on a different side of a square column in the gallery and their edges are a continuation of the adjacent work. A wonderful use of the gallery’s architecture, the work expands the scale of a small feature by juxtaposing it with immense and deep world building. Identity Crisis by Nima Arabi, a long vertical charcoal drawing on brown paper, depicts a figure crouched, nearly in a fetal position, and a fractal like design as a background, possibly emerging out of the figure itself. The work seems like a representation of the fractalization of the self that occurs in a state of identity crisis. 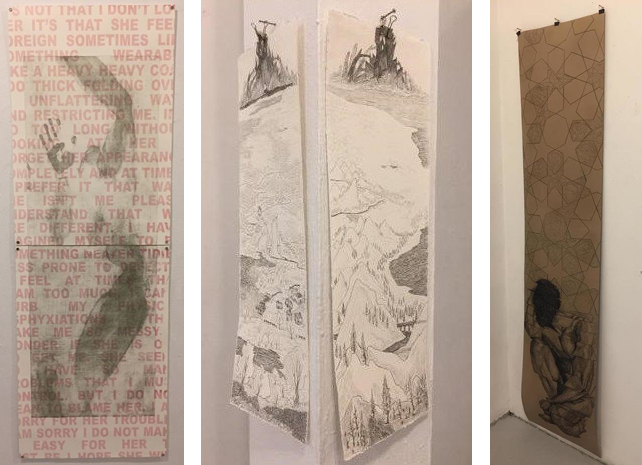 Ness by Danielle Clarke is a realistic oil painting of a girl. The story behind the work is that the artist wanted to help the subject, Vanessa, and the audience to appreciate her beauty. Vanessa grew up with a facial deformity and has been plagued with harsh and cruel negative reactions, as well as a general stigma of being different. Through portraiture the artist hopes that representing otherness can lead us as a society towards openness. 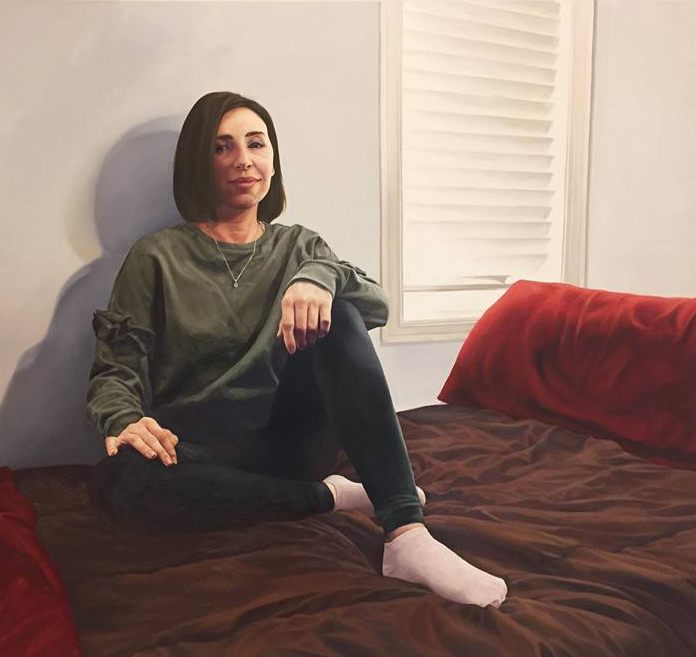 Rhizome by Catherine Orav is a triptych of woodcut prints on interchangeable rhombus shaped rag paper. Each work depict the same scene of a landscape centered on a single tree. A variety of clever elements are at play in this work. Rhizome refers to the botanical process of plants creating genetically identical versions of themselves through stemming root-structures, such as the Trembling Aspen in North America. This ability to multiply is parallel to the printing process to create multiples. Tyler Matheson’s Inheritance is a salon style display of vintage photographs from the artist’s personal archive. The framing and the snap shot photos all contribute to a feeling of home, yet the stark blue colour from the cyanotype process shows a clear intervention as well establishes a distinct aesthetic.

Guilin (Gloria) Li’s The Real is an abstract diagram expressing the artist’s inner and external self. The central pastel circles represent the artist’s persona of a sweet, kind and soft girl while a much darker set of colours show her true, inner nature, which can be aggressive and dark. The scribbled Chinese characters depict the broader context of society, friends and family. Hyatali’s When Life Gives You Lemons is a sculptural installation that spreads across the majority of the room with clay lemons. The work is simple, seemingly lacks strong technical execution and trite, but it is one of my favourite works in the show because of its gestural display and how people respond to the title.

In the Cell Gallery there is Study II by Camden Wallenwein. Exploring chance and reclaiming the detritus of the printmaking process, the artist takes dirty rags and runs them back through a press. A fascinating study that really takes printmaking to a meta and self-reflecting realm. 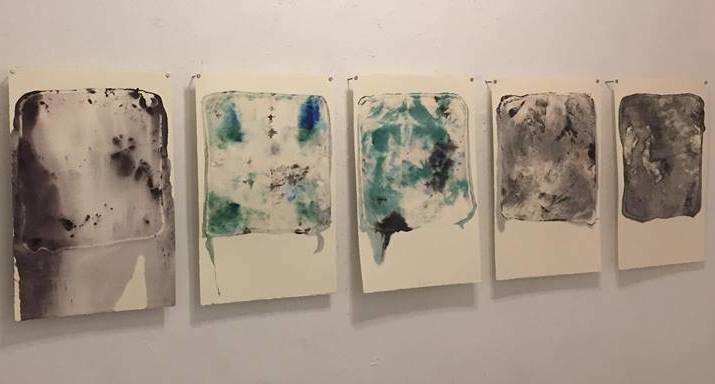 Lastly, in the Process Gallery, we have three distinct sequential audio works on loop and two sculptures by Elham Fatapour. Fatapour’s Trapdoor are found pieces of wood with decorative designs painted on them. The overhead lighting in the room has been turned off, only the trapdoors are spotlighted. The first audio piece Untitled by Danjing Lin is an eclectic mix of noises from highly textured soundscapes to scroll through pop radio stations. Carlie Mackrell’s Whale in the Studio provides the space with the sounds of a whale’s call juxtaposed by the grinding sounds of a construction site. Christina Chiarelli’s Premonition, Paranormal Activity, Ascension, Malaise, Transcending is an series of ethereal sounds. The ominous sounds combined with the notion to lift the trap door by its clasp, changes the atmosphere from gallery to horror movie. 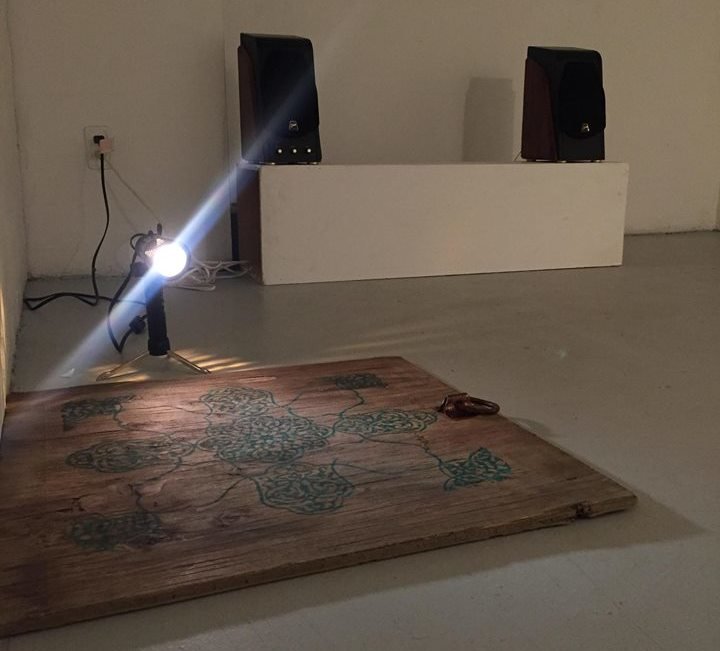 The show tackles concepts from personal concerns to broad cultural issues, abstraction to realism and many more varied styles and various ideas.