The Moroccan-born French photographer, Bruno Barbey, is one of the most internationally renowned artists, with works in museum collections and about 50 books to his name. The exhibition held in Stephen Bulger Gallery is a sophisticated collection of Barbey’s selected photographs, under the title, Witness of Things Past. As the theme suggests, the exhibition exploits the moments captured by Barbey to remind the audience of the past that used to be vividly alive. 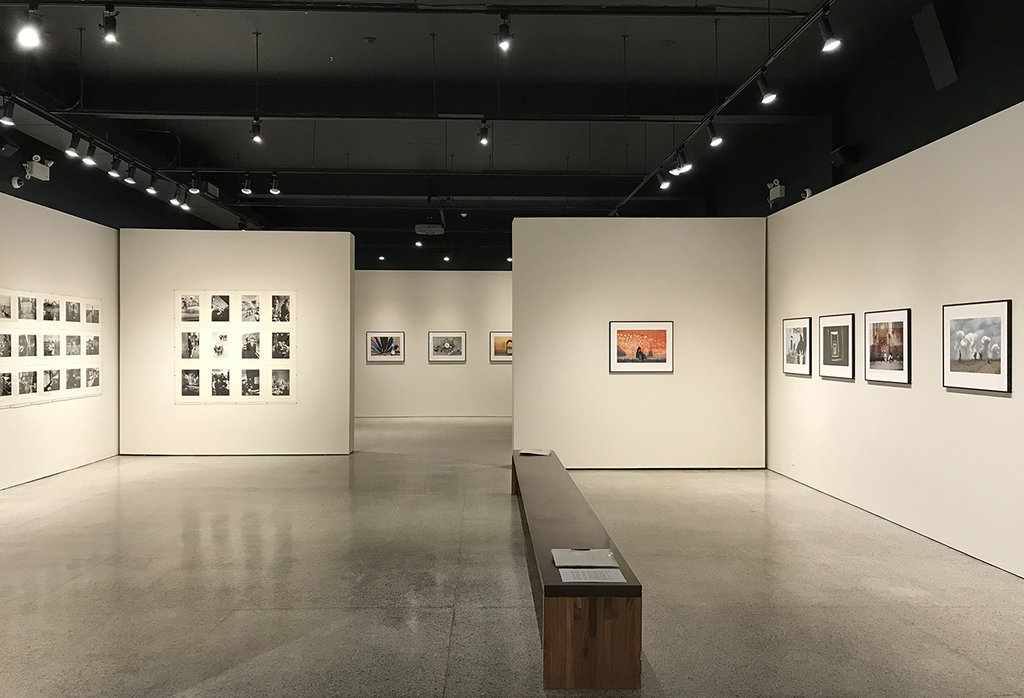 The Stephen Bulger Gallery is a wonderful place to display these photographs. The large gallery is intricately divided into smaller sections. On the left side there is the collection of black and white photographs mostly shot in the 1960s while the rest of the place is dedicated to framed color photographs from the artist’s oeuvre of later years.

In the early 1960s, Barbey’s professional career begun with his series “The Italians”. The black and white works feature popular themes: families sitting on a motorcycle, laughing happily; leaders making their speeches to the crowd; fashionable dressed ladies and gentlemen in the opera or dancing in ballrooms. As Barbey said he believed in spontaneity, never asked for permission from his “models” to photograph them, since it would change the atmosphere, make people to pose and it would steal the image. He dislikes large, complicated cameras and makes his images in daylight. Most of the black and white photographs are depicting small details and unimportant subject matters, like the little things in life we might have overlooked but Barbey picked them up for us, just to memorize that particular moment. The narrow street is packed with laughing children in Naples, showing their poor surroundings and the beggar in the background, as it really is. Barbey creates a modern Commedia dell’arte, involving the rich and the poor, radiating life and energy.

One of his early eminent, award winning photograph is One million demonstrators walking towards the Place de la Bastille, May 13th, 1968. The unrest in Paris, in May 1968, began with university student’s occupation protests against capitalism, consumerism and American imperialism. Very soon it spread into factories, strikes broke out all over France and the French government was afraid of a revolution. The photograph depicts one of the best moments of the movement, when it is strong, the people are united, brave and determined. It shows how peaceful the crowd is, marching with their banners, wanting a better future. Even the government brutally broke up the uprising, its historical importance as a “social revolution” remained. Of course, Barbey didn’t know all of this at the time he took the photo, he, like the young man on the top of the traffic light, observed it – and that’s all a photographer can do. 2018 is the 50th anniversary of the May protest in France and Barbey is editing a book to commemorate it. 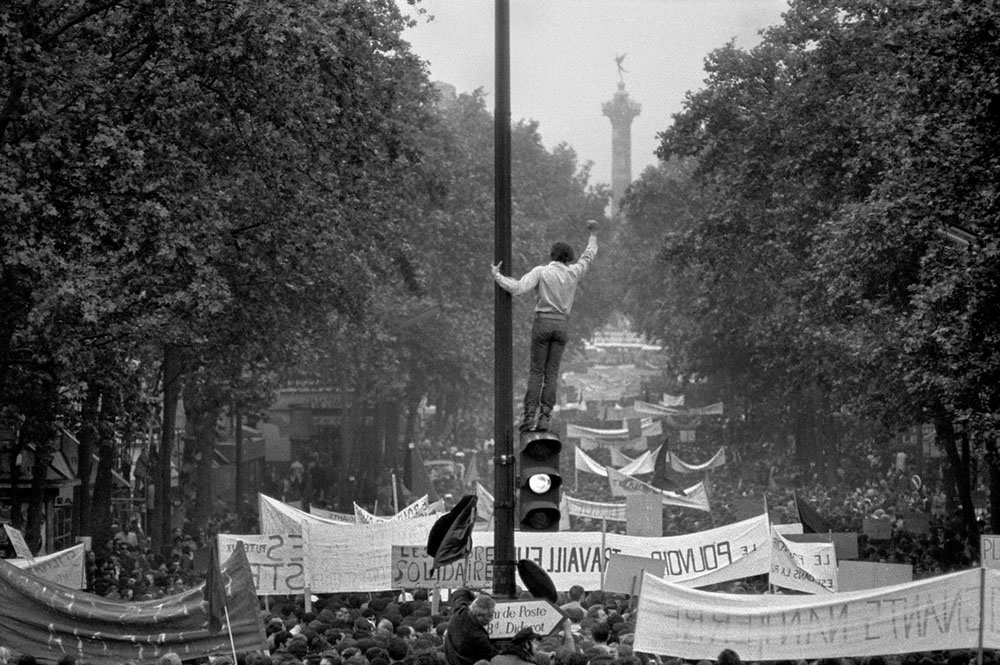 Not all of the demonstrations were as peaceful as that one in Paris. Demonstration against the construction of Narita Airport and the Vietnam War, Tokyo, Japan, 1971 shows the opposing powers in the very moment they are attacking each other. The block of people in the protesting crowd – wearing white helmets and carrying red flags – is strongly juxtaposed by the police force’s dark square. The fighting has already started in the background, the photographer picks the moment when everything is possible, we don’t know that it would be a bloody fight or just a confrontation with a few broken bones. 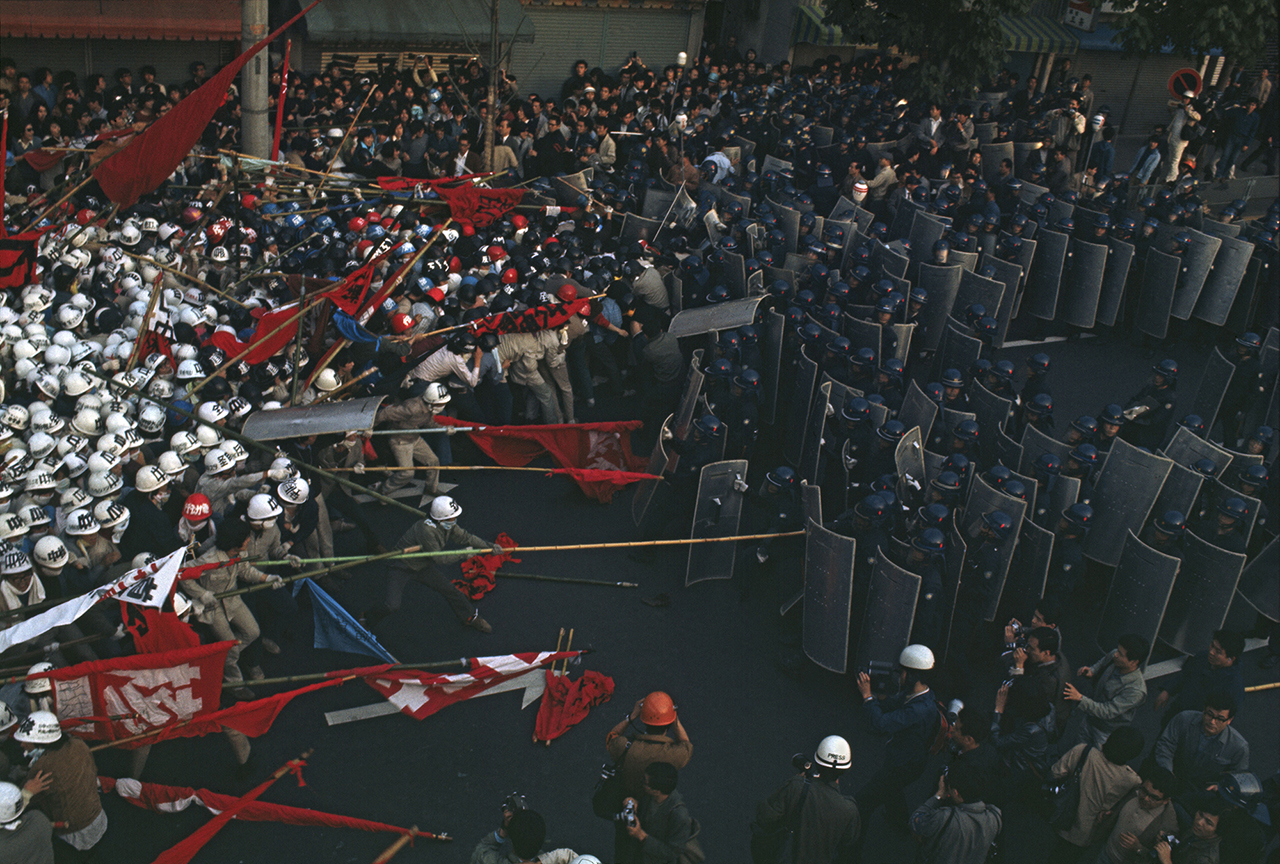 The framed works are the highlights of this exhibition. In those, mainly for Magnum, Barbey addresses more political and military issues as a war photographer. He has been traveling to hundreds of countries in five continents such as China, Vietnam, Korea, Morocco, India, Kuwait, Japan, France, Brazil and so on, to document their affairs and happenings. This is a tough journey, that the artist has found challenging in many ways, not just the physical danger itself but the mental burden as well. The works he has created in war zones are very dramatic and astonishing. The photographs are documentaries of the events of war but Barbey’s main focus is always the people who live through it. War photographs in our times are different from the ones we saw in history textbooks about WWII. The main battles are usually happened in the background in the past or just ready to start. 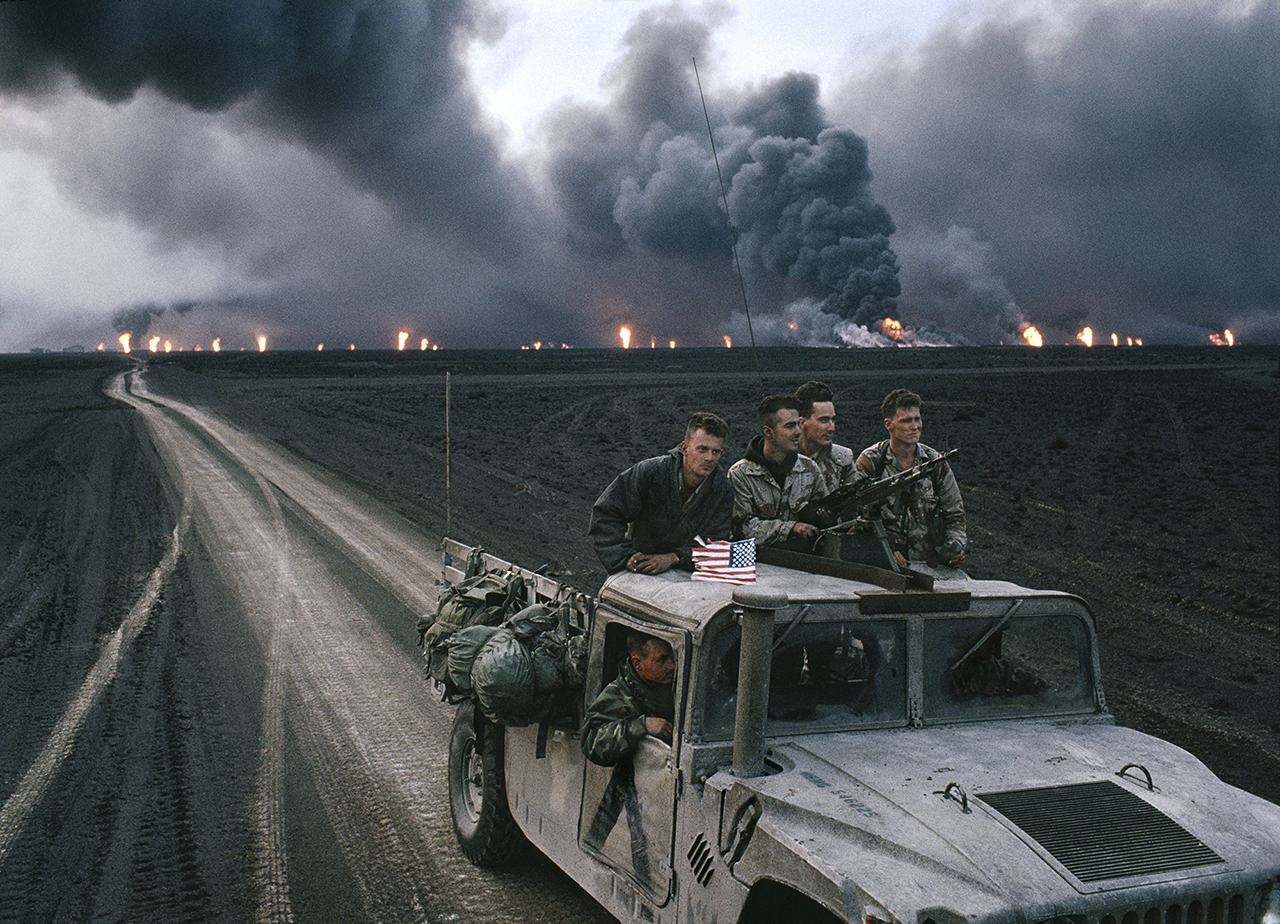 Burgan oil fields, Kuwait, 1991 records the scene when 500 oil wells were on fire when Iraq occupied Kuwait. The burning oil wells and the GIs driving in their truck away from it seems like a scene from the movie Apocalypse Now, a very dangerous place to be. The real danger in war photographing, as Barbey pointed out in Photographer Spotlight, that it has no dimensions, the situation is very cruel and death occurs almost natural, so the viewer easily becomes cynical. Barbey doesn’t want to turn into one of those people and quotes a fellow photographer, Cornell Capa, to outline his own philosophy: “The Concerned Photographer produces images in which genuine human feeling predominates over commercial cynicism or disinterested formalism.” As Barbey said he makes his living as a photographer but first of all he focuses on and feels great compassion for the people involved in the situations he documents.

Barbey’s favourite themes are peaceful scenes, especially historical places where people follow traditional practices while, at the same time, apply themselves to our modern times. He is photographing extensively in China today where those transformations are very visible now and a book soon will be published with his images. 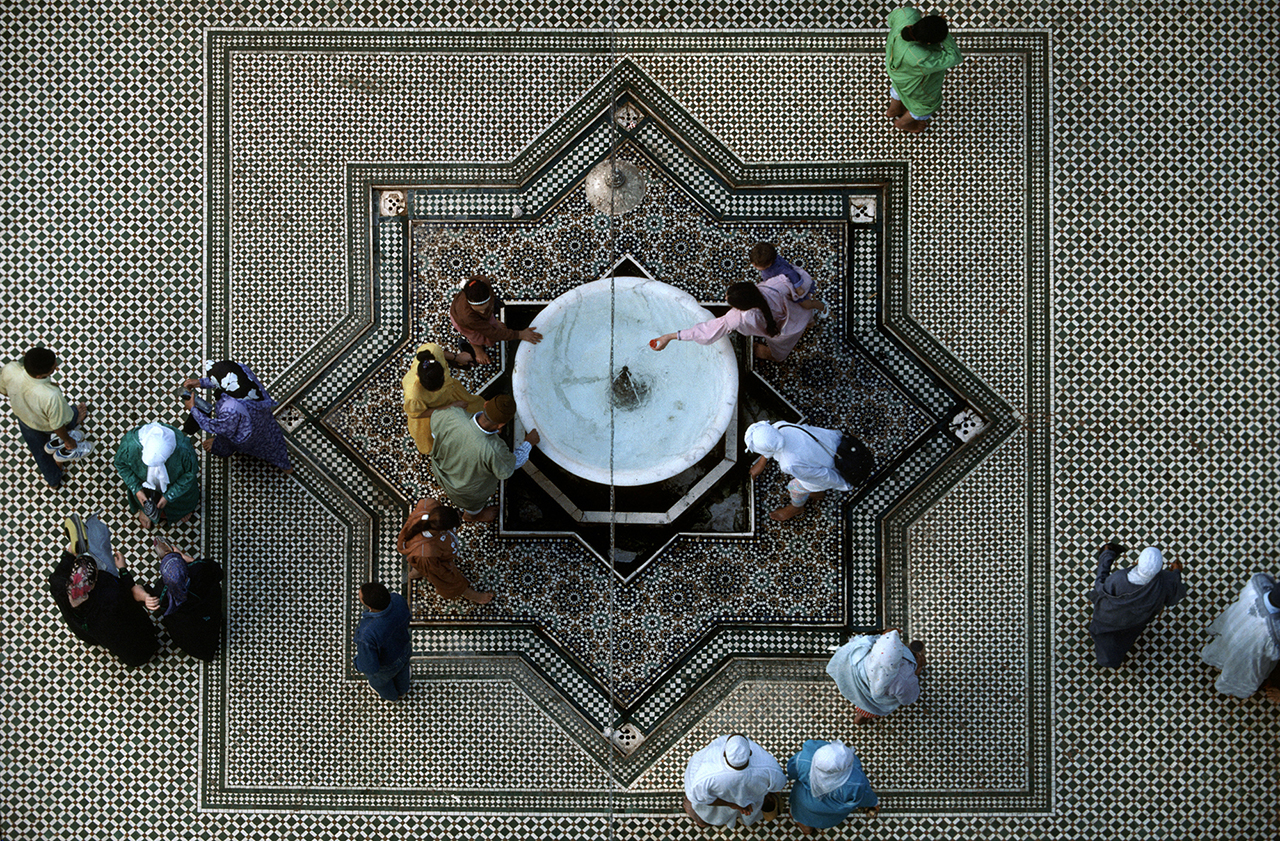 Barbey loves to depict people in ordinary moments, but the way he does it is everything but usual. The boys in Leticia, Colombian Border (The Amazon River), Brazil, 1966 are shown in different stages of their jump, so we can feel their speed and joy without focusing on any of them. Rivière des Galets, Reunion Island, France, 1991 shows a bicyclist in a very tricky composition when it is hard to decide when the water ends and the human body begins. 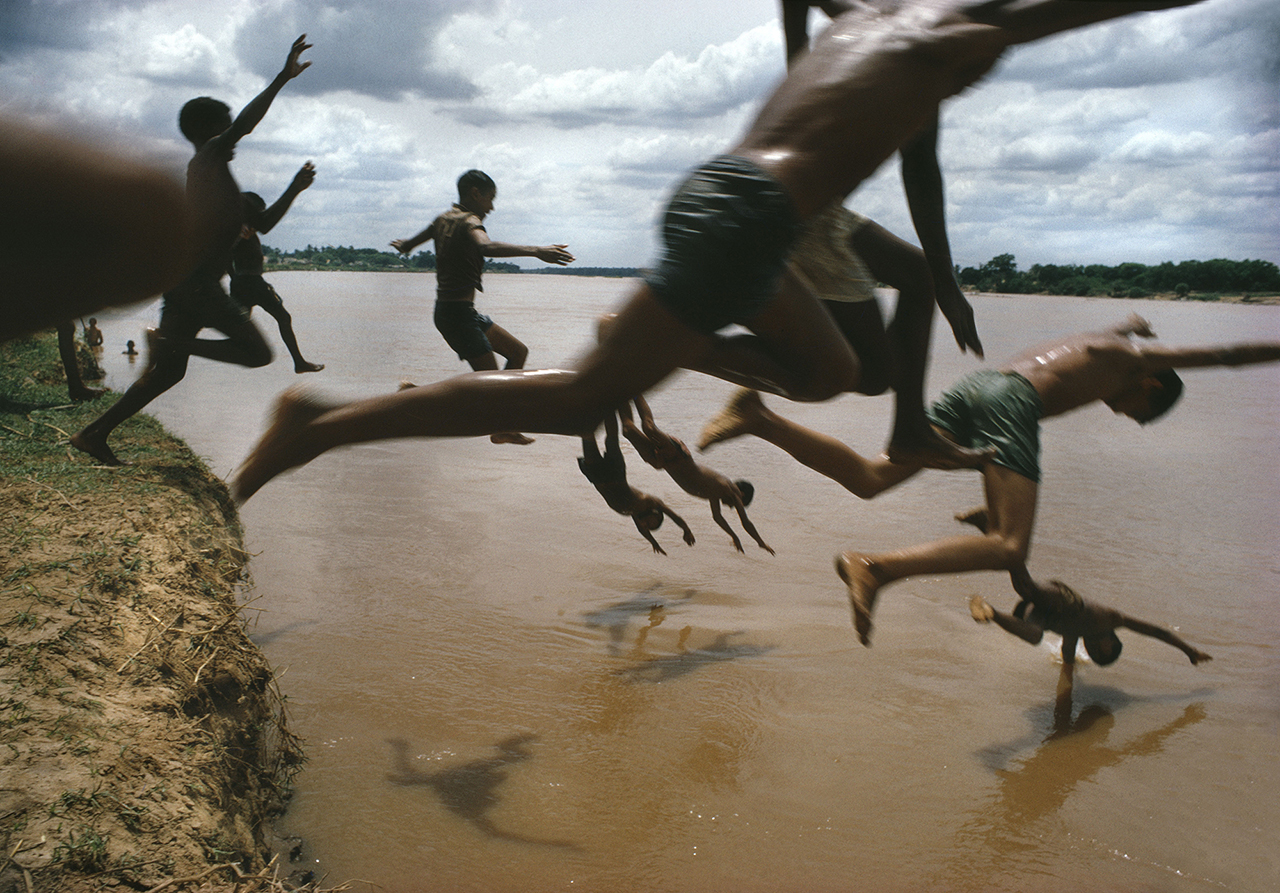 What makes Barbey a great photographer is not only his technical perfection, sense of beauty but his humanitarian attitude, his love toward his subjects and the stories he tells about them. Like he said, photography is the only subject that people could understand without a single word.