To enter the Power Plant’s current set of exhibitions is to enter a discourse and a landscape that seamlessly blends in with one another. In the three exhibitions, Ellen Gallagher: Nu-Nile, Abbas Akhavan: variations on a landscape and Grada Kilomba: Secrets to Tell, the artists presented tackle issues surrounding dominance and space.

We are first greeted by Ellen Gallagher’s work Deluxe, a set of sixty mixed-media collages that are artistic interventions into magazine ads and photographs that feature black figures from the 1960 – 1970s. The work seems funny and playful at first with the broad use of materials, such as plasticine, googley eyes and felt, but the pieces tackle the serious issues surrounding assimilation of the black body into colonial culture. Acceptance is conditional upon the adoption of white, capitalist, technological and pharmaceutical ideals which violently alter or erase the characteristics of African heritage and physical features. 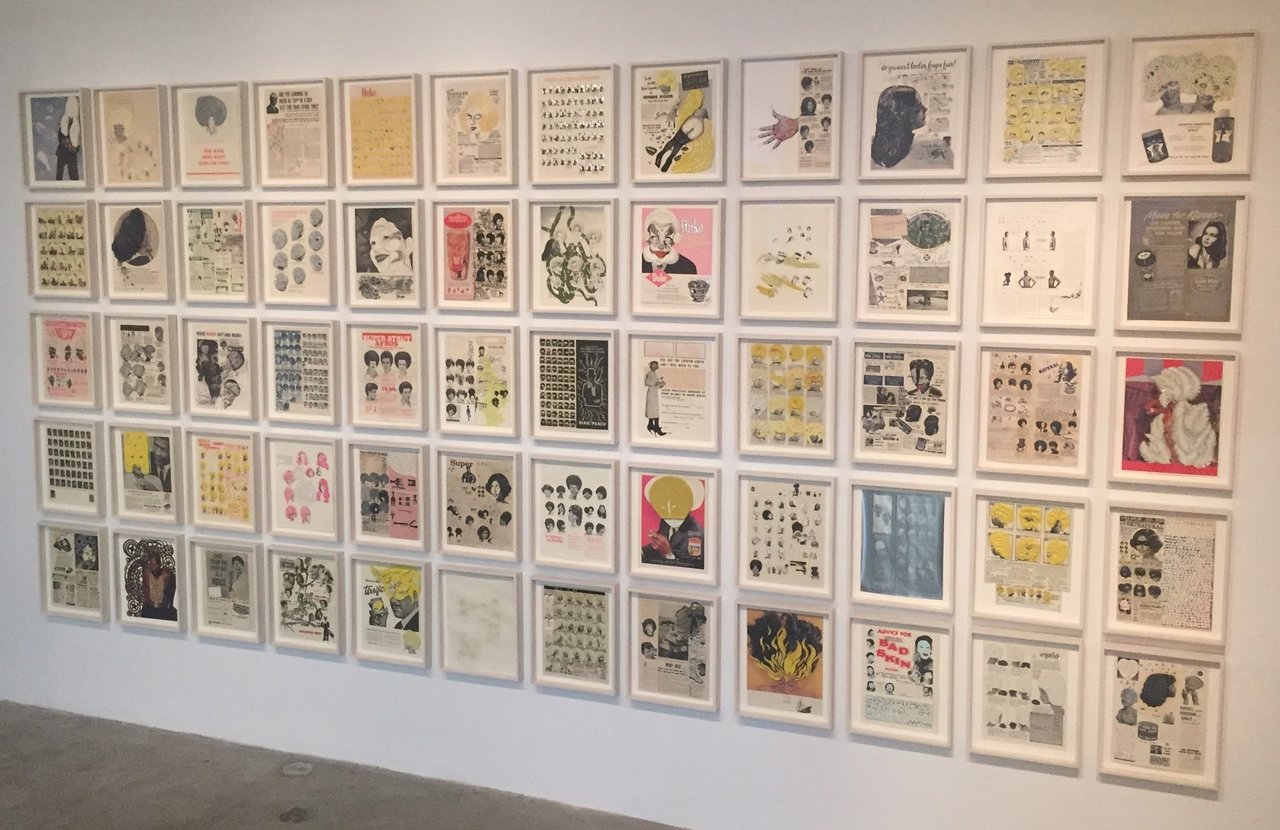 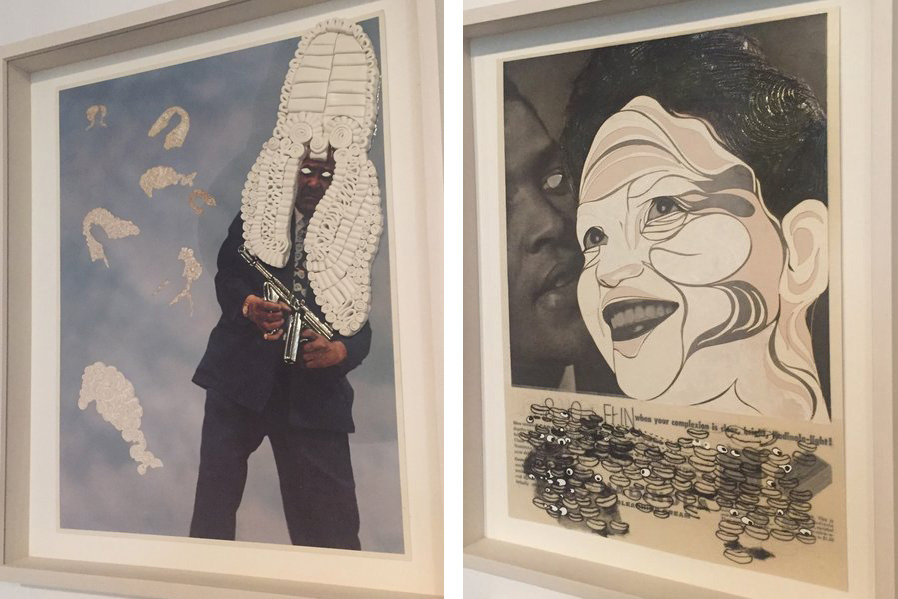 At the end of the hallway is a video projection depicting a composite image of two figures within a heavily draped room, amidst a modelling session. The work refers to several prominent figures and concepts in popular and artistic culture. The base of the image is Man Ray’s photograph of Henri Matisse, yet the face of the model has been replaced by the artist, Ellen Gallagher’s own face, while Henri Matisse’s has been replaced with Sigmund Freud. Gold leaf filigree-like designs embellish the gallery walls, creating lustrous reflections from the projection. Gallagher’s pose and the work’s title recalls works such as, Jean Auguste Dominique Ingres’ Grand Odalisque, and similar historical depictions of reclined females, most discernibly many compositions by Henri Matisse. The meaning of the work is a critical examination of the Orientalist and male gaze of many canonized and celebrated painters and theorists of the 20th century. It can be interpreted that the hybridized Matisse-Freud character is too absorbed in his own work to even notice the female model, while Gallagher’s striking gaze and placement shows us that she is highly scrutinous and aware of herself being ignored in favour of the man’s idea of her. This single image is a beautiful allegory for the unfortunate creation and fetishizing of stereotypes. 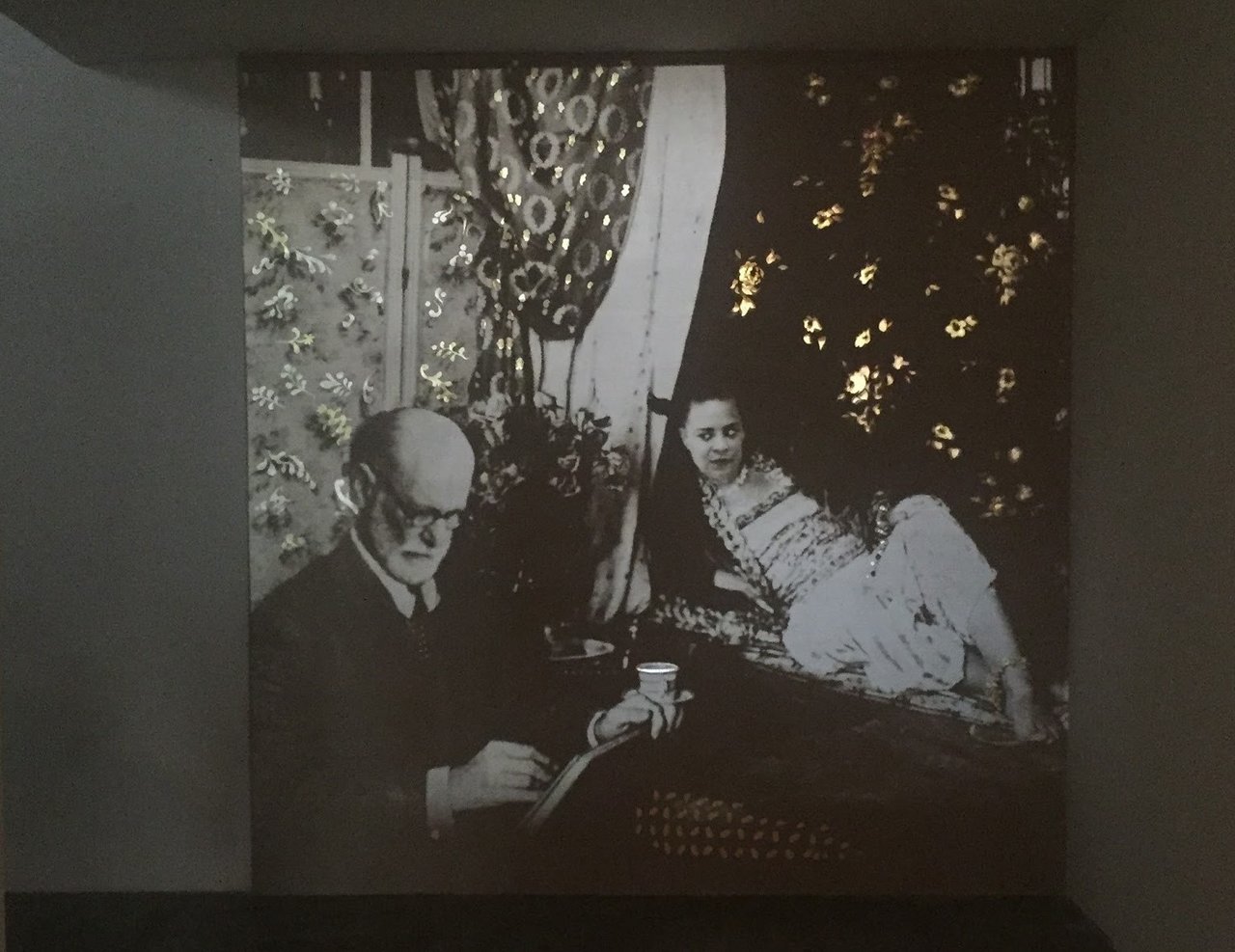 In Negroes Battling in a Cave series and Kapsalon Wonder, Gallagher explores the history of abstract painting and the potential of black field paintings. Each of these works are monochromatic and glossy, with textured surfaces featuring collaged pictures and letters. The collage elements within the Negroes Battling in a Cave series depict deconstructed attire, body parts and words that were common tropes within Blackface Minstrel performances. The title refers to a racist joke discovered through x-ray analysis underneath of one of Kazimir Malevich’s seminal Black Square painting.

The remainder of Gallagher’s works are chronicles of water bodies, a theme, that she has been inspired by for a long time.

Highway Gothic, features light boxes, draped, scrolled and hung transparency of cyanotypes and film negatives, some with text, all surrounding a film projector playing the most recent movie by Ellen Gallagher and Edjar Cleijne. This black and white film explores the waterways and bridges that appear like politically neutral structures to traverse natural terrains. However, this specific highway, US Interstate 10, was historically placed with strategic intention in order to build infrastructure that imposes segregation. The highway became a physical barrier and reference point to assert a sense of Otherness. Additionally, the highway was a destructive and violent dividing of natural geographies, specifically one of the largest wetlands in the United States. Gallagher draws a parallel between the subjugation of the natural flora and fauna that inhabit these waterscapes with the subjugation of African American populations. The title of this installation is drawn from the font used on American road signs. 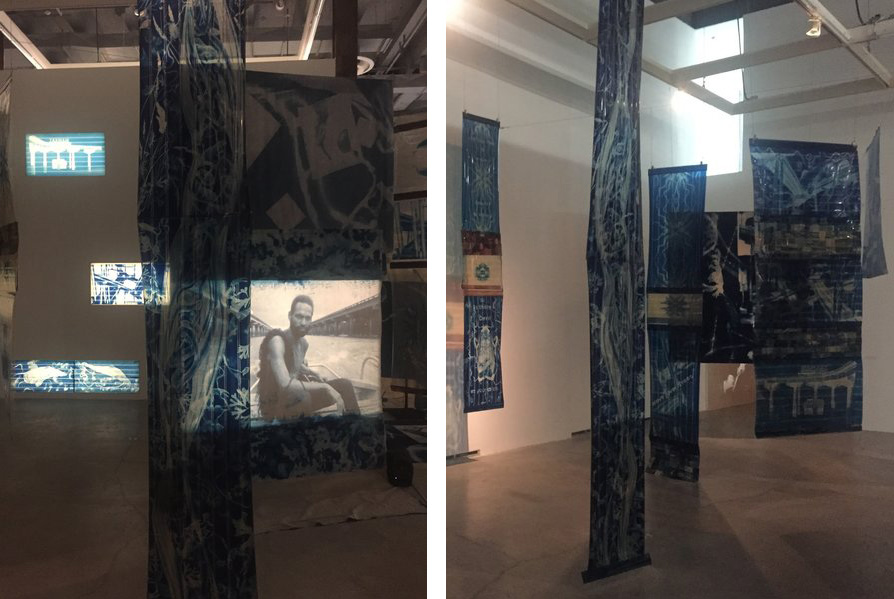 In Abbas Akhavan’s site-specific installation variations on a landscape, curated by Carolin Köchling, we are transported to a rose coloured environment with minimal elements retrieved from outdoor spaces. The artist covered the Power Plant’s skylights with pink gel filter material, dowsing the space below in its hue. Within the corridor we find two styrofoam swans, obscured by the illusion that the cement floor is the surface of a body of water and additionally, one swan appears to be either mutated with additional appendages or caught between moments in time and movements, like a Cubist painting or Futurist sculpture. The water that is seemingly passing through the fountain and contained in its basin, is actually imbued with the sex hormone: estrogen. The layout of the fountain and swans are intentionally distributed in an asymmetrical manner to destabilize the grid-like structure of the hallway and encourage a more central and rounded point to bring together people within the space to convene at. Conceptually the work seems raise issues and tension around engendering species as well as contentious elements of human influence, such as pollution and its effects on the ecosystem. 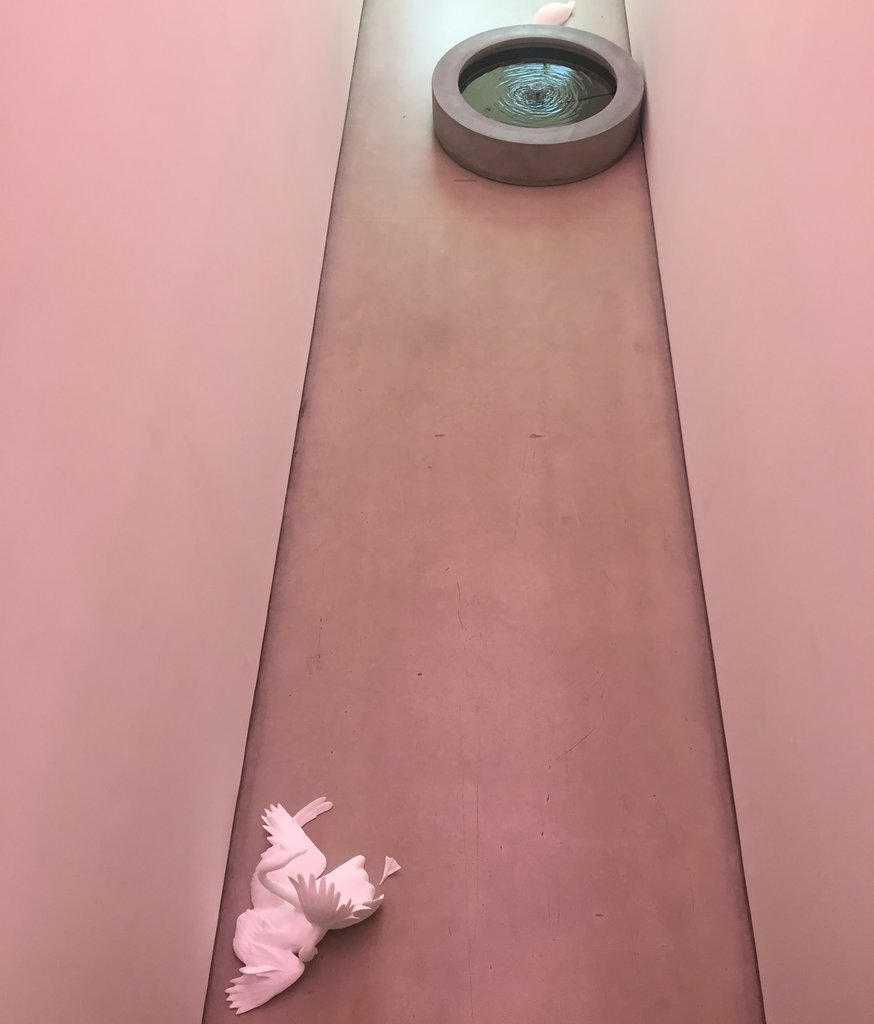 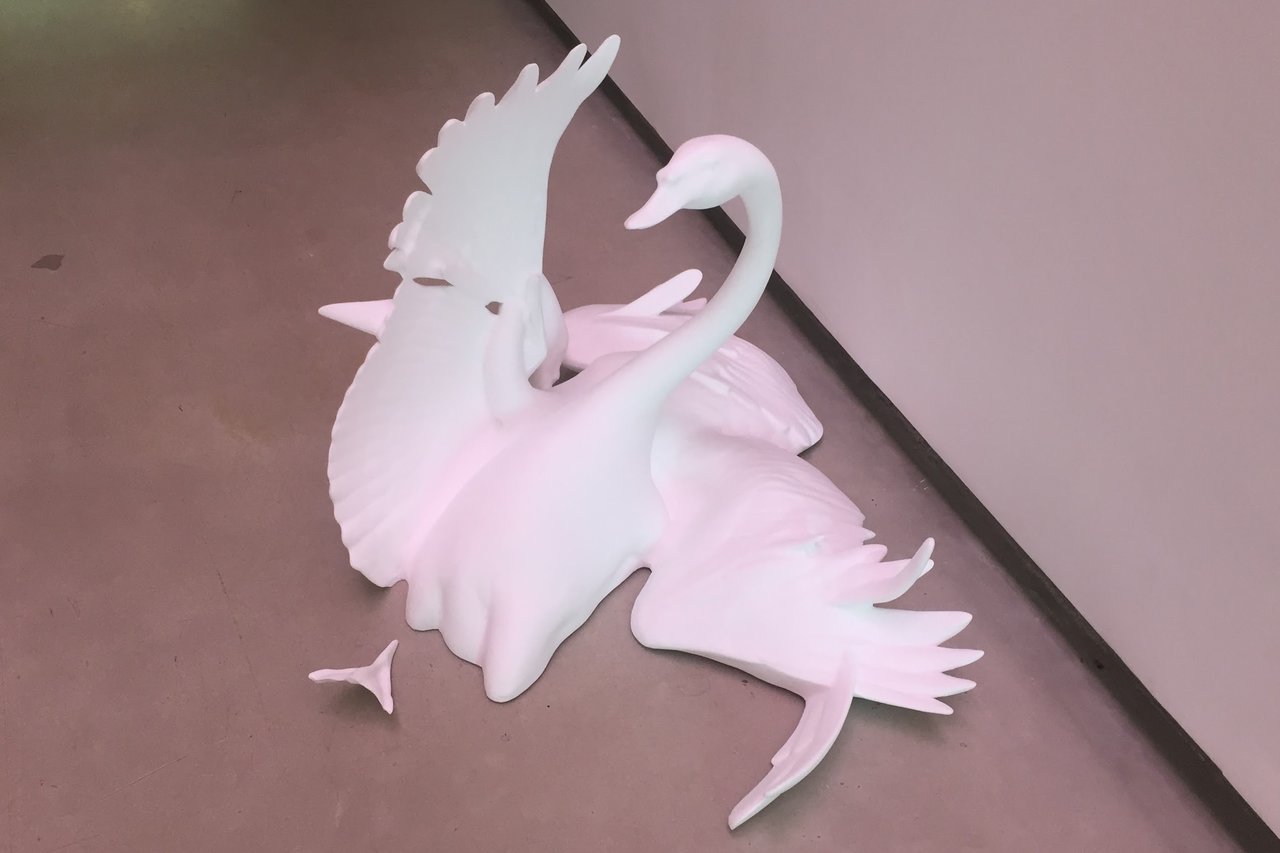 Abbas Akhavan, variations on a landscape

The intervention with the natural sunlight is feminizing the room below, as well as dilutes and contaminates the light quality. Similarly, the estrogen in the water fountain is equally an introduction of a hormone that develops secondary female sex characters in human bodies, as well as a defiling of a source of drinking water. The two swans are made from a material that is common amongst landfills and extremely difficult to break down in natural environments. They are also a romantic symbol in many cultures because of their beauty and life-long mating. The configurations of the swans are ambiguous, since they can be read as mutant and dead, or one of them as transcendent and evolving while the other is simply feeding underwater. The discordant aspects between potential meanings seems intentional and is validated from the gallery wall text that describes Akhavan’s research practices as “a forked space between hospitality and hostility.”

The third exhibition, Grada Kilomba’s Secrets to Tell is about the African Diasporic people, and as the artist stated, about their secrets, like slavery, like colonialism, like racism. Plantation Memories (2008) is a reading of anecdotes of racism in an everyday context. Issues surrounding whitewashing of people of colour, appropriation of Black cultures, racist jokes that turn brutal histories into gags that are expected to be harmless, many forms of microaggressions such as invasive questions that presume Otherness, and much more – retold by five actors sitting in chairs on a stage in a dark theatre space. The Chorus is an excerpt from Plantation Memories installed with black vinyl lettering on the gallery wall. Tall and spotlighted, the work is extremely poetic, like a stream of consciousness that encapsulates the pressure of being black within a racist system. 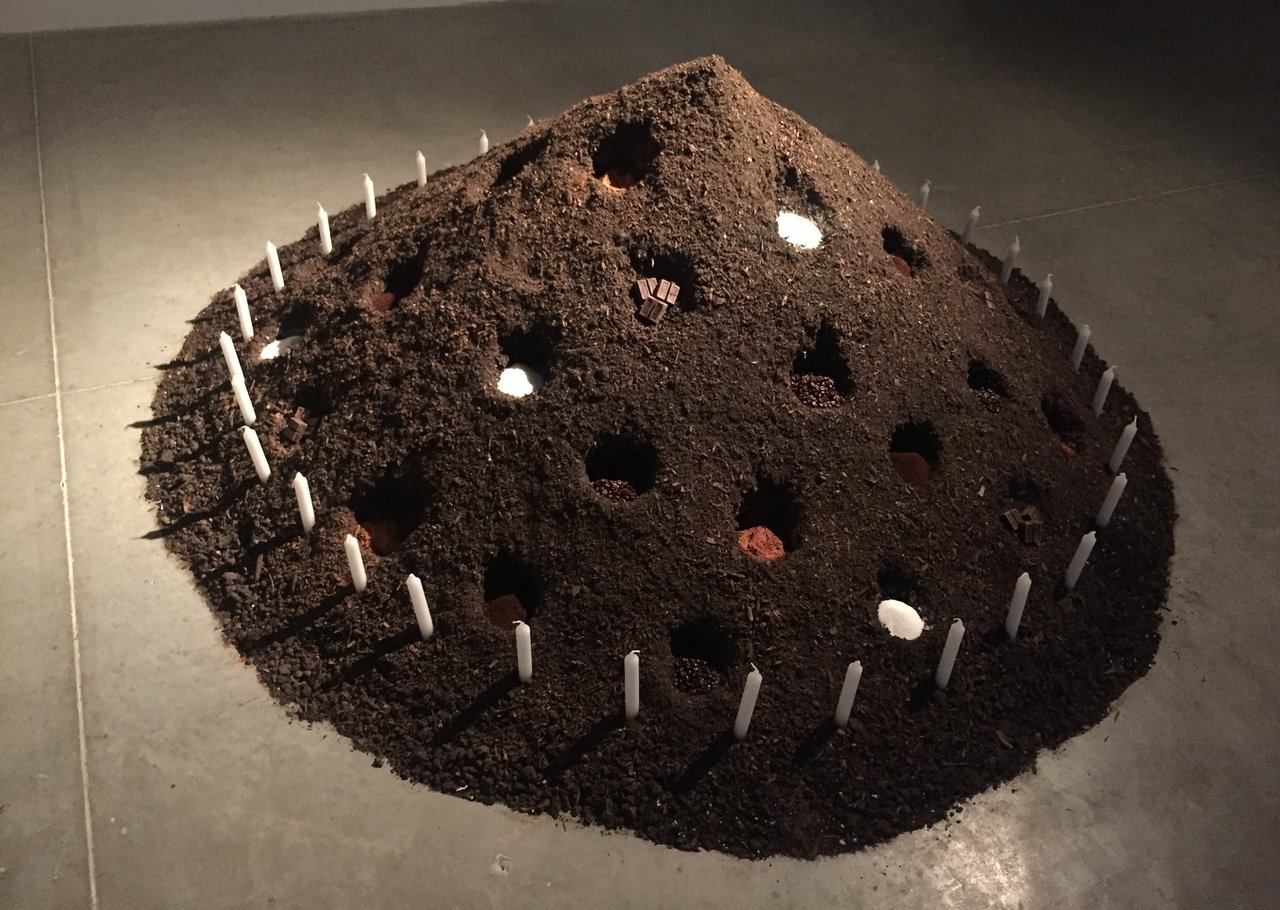 Table of Goods (2017) is an installation that features several elements within the room: a sculptural conical mound of earth with pits dug out throughout it, each pit being filled with various products, such as coffee beans, coffee and sugar, and surrounding the perimeter are unlit wax candles; a table and stool with beaded necklaces, a pipe, a lit candle, bowls of goods, lilies in a water glass and a stack of wax candles; a diptych of a letter titled The Mask and an illustration of Escrava Anastacia with a white beaded necklace hanging around it. They tell a very powerful story of the brutal and violent enslavement of black subjects by colonists. The story told in the letter by Kilomba’s grandmother reminds us for the importance of remembering. 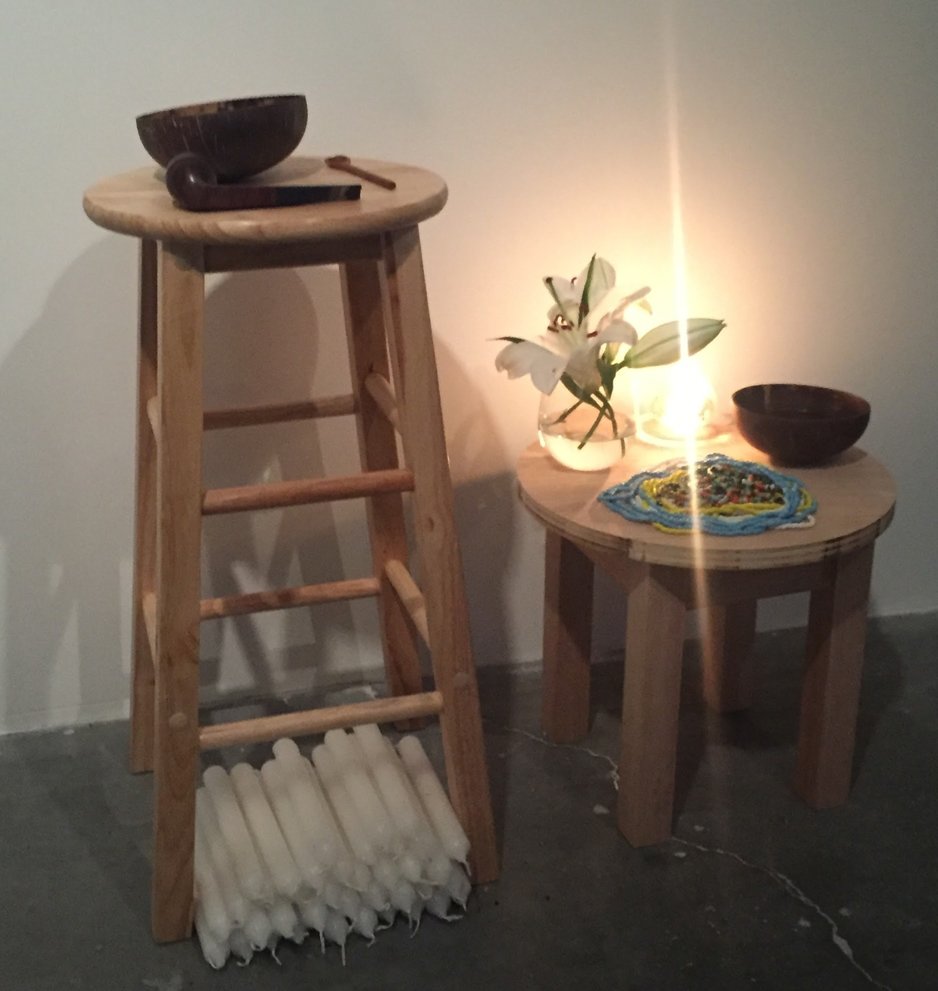 The Desire Project is a three-channel video with synchronized text and music. The words describe the artist’s need to write. This piece is affective and direct and with the other installations create such a thought-provoking show. 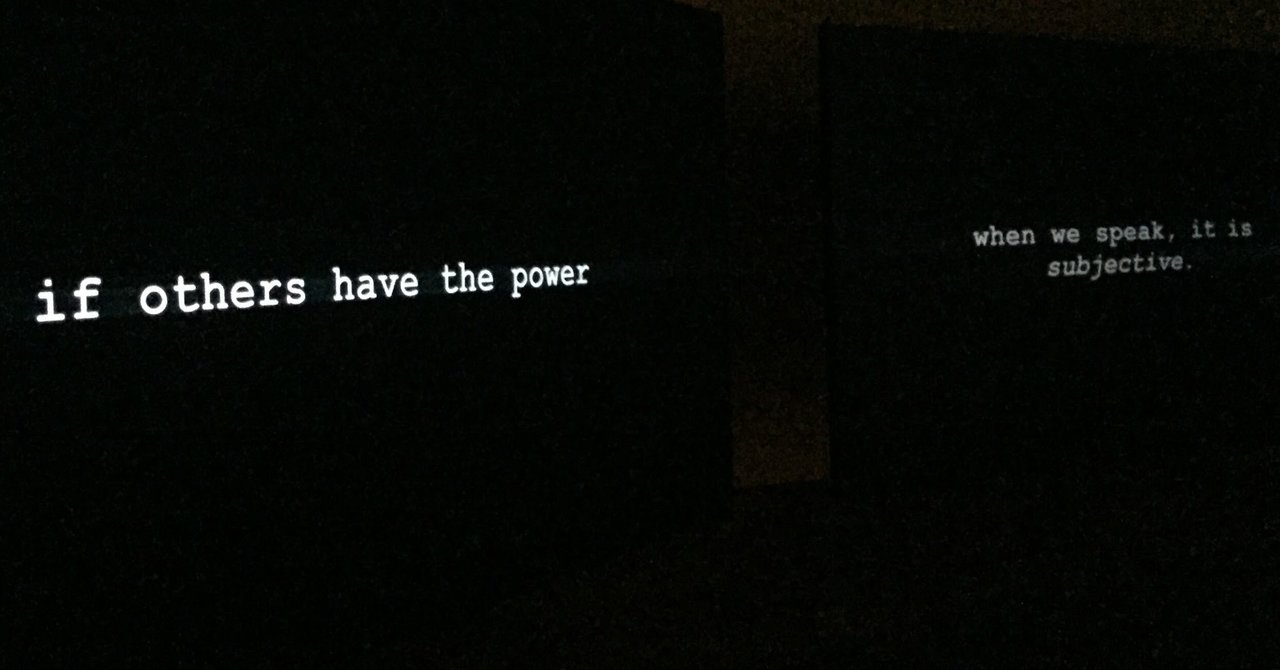 Each of these exhibitions at the Power Plant are evocative and riddled with poignant significance that require in-depth analysis and interpersonal sensitivities. The educational aspects of these works cannot be overlooked or undervalued.