Wild Inside at Clint Roenisch Gallery is a group exhibition inspired by the broad potential and specific act of guerrilla gardening in an urban environment undertaken by the gallerist in front of their location on St. Helens Avenue. 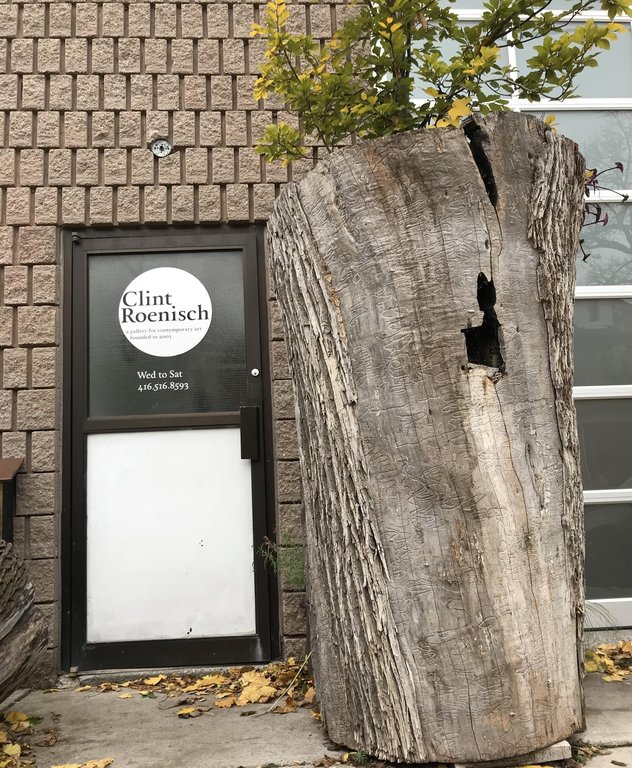 Before entering the gallery and seeing the current show, guests see the facade of the building, a former commercial facility with a large retractable overhead door, now featuring numerous natural wood structures, benches and logs that house garden beds and growing foliage. This area is as much a site of production as it is aesthetic since it generates vegetation growth, artistic inspiration and potential for reclaiming environments from the hard, brutal landscape of the modern urban dwelling.

Upon entering, we pass the lounge area which maintains a similar aesthetic of reclaimed materials and eco-design. 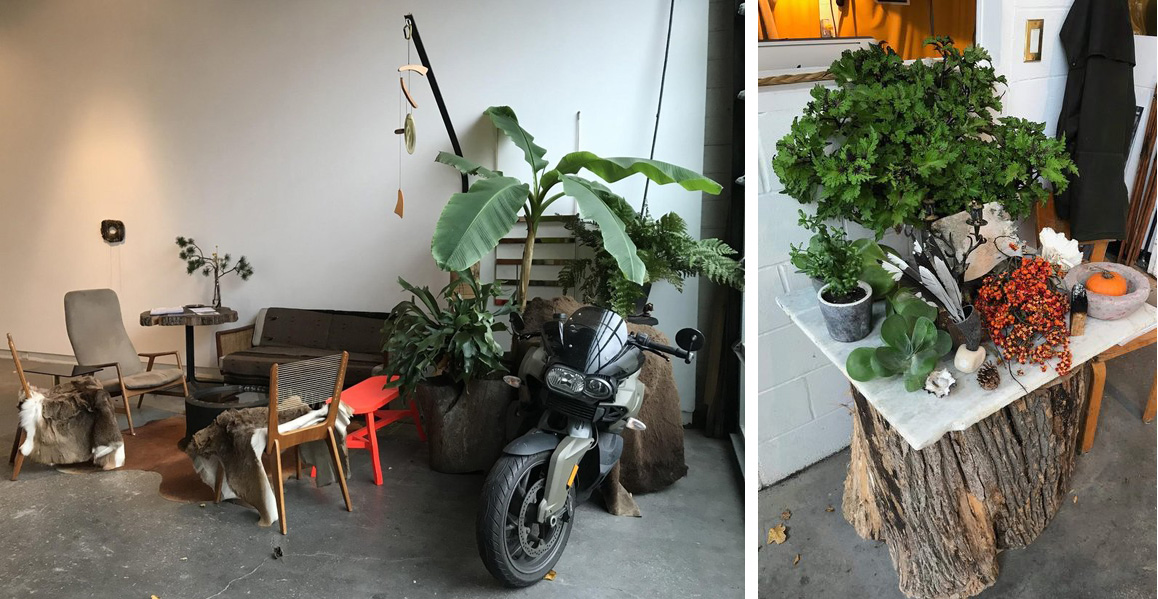 Under the vinyl sign Wild Inside, Vanessa Brown’s Ovule sits on a plinth. A plaster cast of a hand is grasping a dried sprig of an unidentified plant referred to in the exhibition catalogue as “flowers”. Ovule is the word for an immature germ cell that becomes a seed after fertilization. The hand seems mutated or interdimensional, either like it has grown new fingers or it is an image locked between two states of movement or maybe multiple hands are overlapping while grasping for the same thing. The piece could be interpreted allegorically as an imagined, post-apocalyptic mutant picking what may be some scarce plant for nutrition, or perhaps it speaks about the desperation of the current times or for how we all are so quick to pluck native weeds to maintain our unnatural and finely groomed lawns and gardens. Regardless of interpretation, it is a great beginning of the rest of the exhibition.

In the front gallery space, we see a collection of work by artist HaeAhn Kwon, featuring a peculiar material; baked bread. The flour used to make the bread was mixed with dirt and is shown alongside or as a part of found objects. Kwon manages to incorporate the physical materiality of both the urban and garden aspects of the exhibition’s theme through their use as reclaimed or up-cycled objects. Her sculptures meld the discarded elements of culinary arts with the discarded pieces of industrial design. The end results are assemblages that surprisingly either share or contrast textures. In Bleed Water, bread, dirt, stone and a garden hose nozzle are all rendered with the same Sienna textured spray paint to homogenize the sculpture. The uniform colour and texture draws a comparison between the materials beneath the paint as well as suggests exposure to the outdoor elements. In Femme Vital the bread is mounded to prominently feature a circular hole in the middle and is adorned with thin gold chains reminiscent of necklaces. This work demonstrates a stark juxtaposition between the rather grotesque mound of the dirty bread-like substance and the elegance and femininity associated with the jewelry. Kwon’s pieces come across simultaneously as a mere novelty or playful use of the materials, and also as elusive poetry. 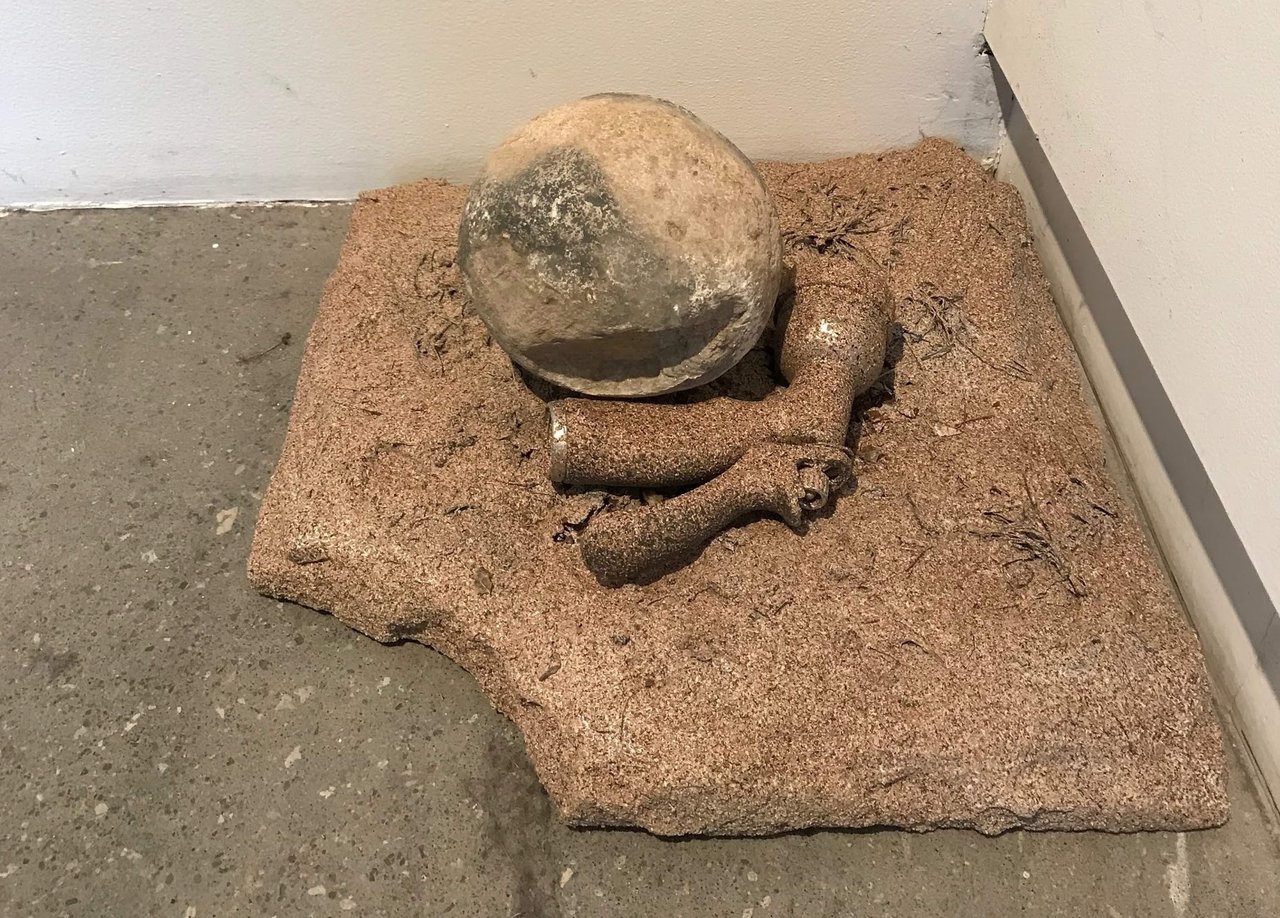 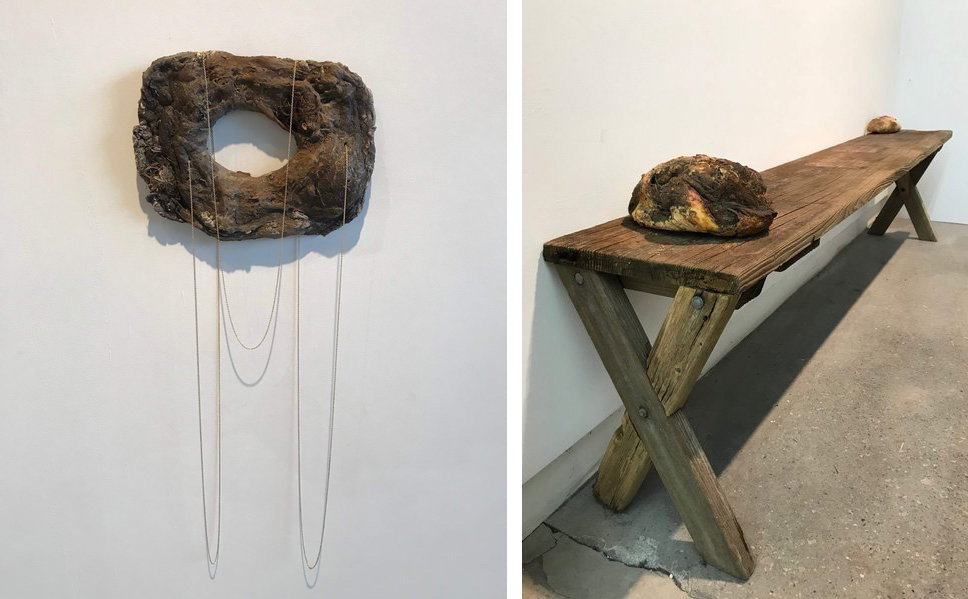 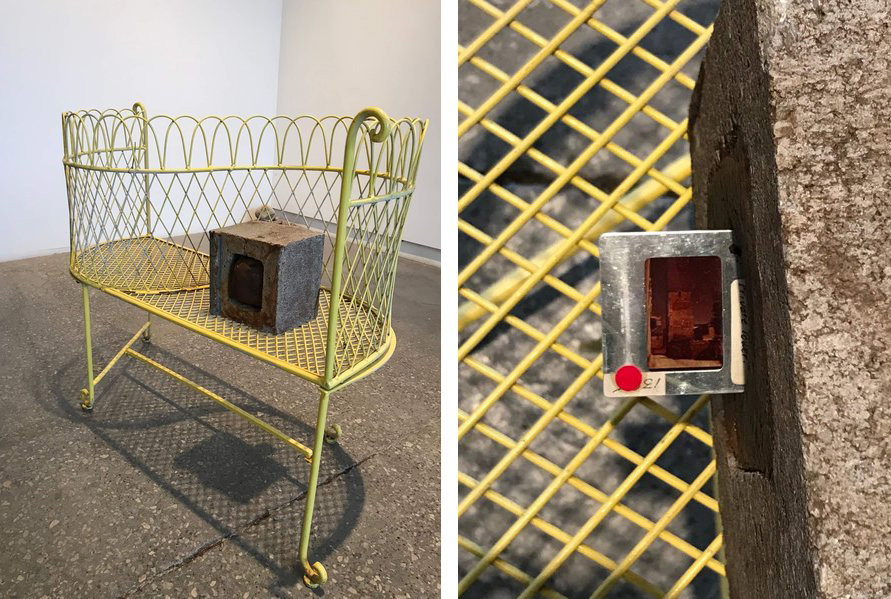 Tania Kitchell’s Sideroad Plantain is a collection of sculptures humbly placed in the corner of the white cube gallery with their own monochromatic white palette nearly blending into the background. Upon close examination, the pieces are a beautiful rendering of plants. They are 3D printed and made of ABS plastic. The work is uncanny and verges on disturbing, since they bear such a strong likeness to real plants, but also deviate from the real with fragments of computer rendering and unnatural colouring. Other versions of this work, exhibited in other contexts and forms, reveal the artist’s intent to model species of plants that have been discovered in Arctic territories where they not native but populating the area due to human activities. The alien-like aesthetic of the all-white plants are intentional as we associate the Arctic with white snow. Introducing foreign species can be detrimental to the balance of nature but can also be hopeful in the dead, greyness of urban environments, where plants manage to penetrate and change in order to maintain their presence in habitats that we think of as uninhabitable. 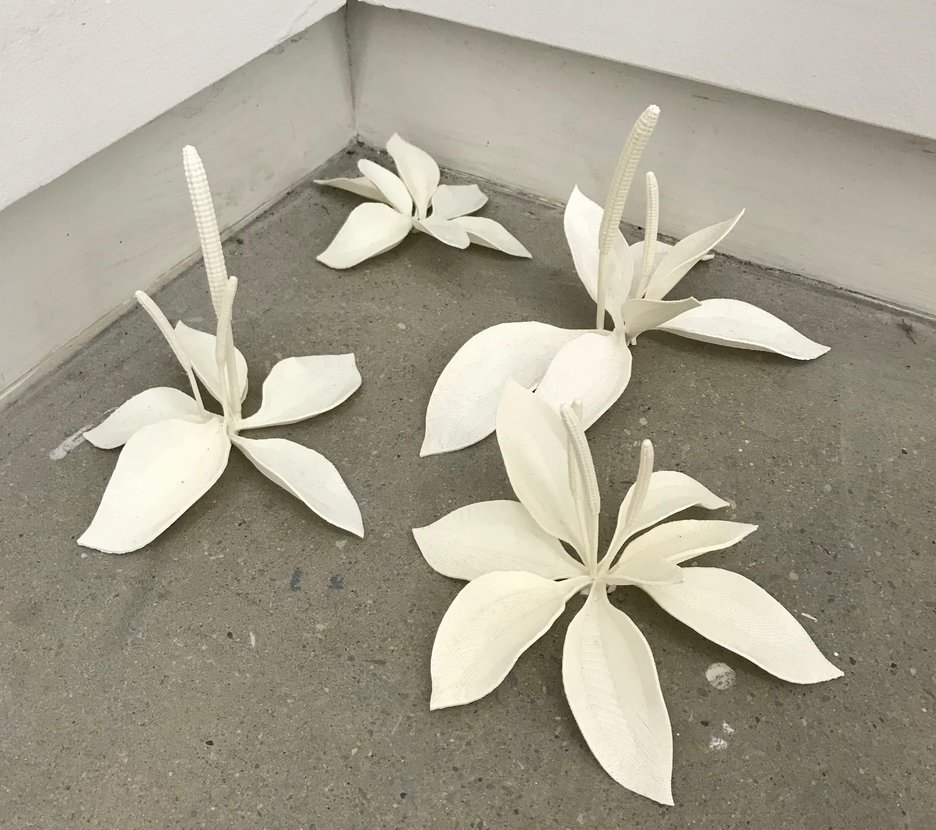 Tania Kitchell’s work also demonstrates the resilience and strength of plant life. In the series titled after various rooms, we see weeds, grasses and flowers growing in tiny patches of domestic spaces. To me, the work seems to suggest a necessity of cohabitation with nature, instead of dominating or ostracizing it. The work ties itself beautifully to the inspiration of Clint Roenish’s sidewalk garden and brings the idea and importance of gardening to a very personal and accessible space – the home.

Lorna Bauer has a suspended sculpture titled Bromeliad (Margaret Mee), in the corner of the gallery. The piece is a representation of a plant from the bromeliad family (the same as the pineapple) and features a long, spiraled root made from pink glass. A common air plant, the bromeliad is cast in bronze and glass, two dense, heavy materials which are a complete inversion from the typical lightness of the real plant. The title of the work pays homage to the late botanical artist Margaret Mee whose work had a significant role in environmentalism, particularly in the Amazon. Some members of the bromeliad family have adapted to extremely harsh climates, from rainforests to deserts and even man-made environments, such as growing on telephone poles and other structures for support. 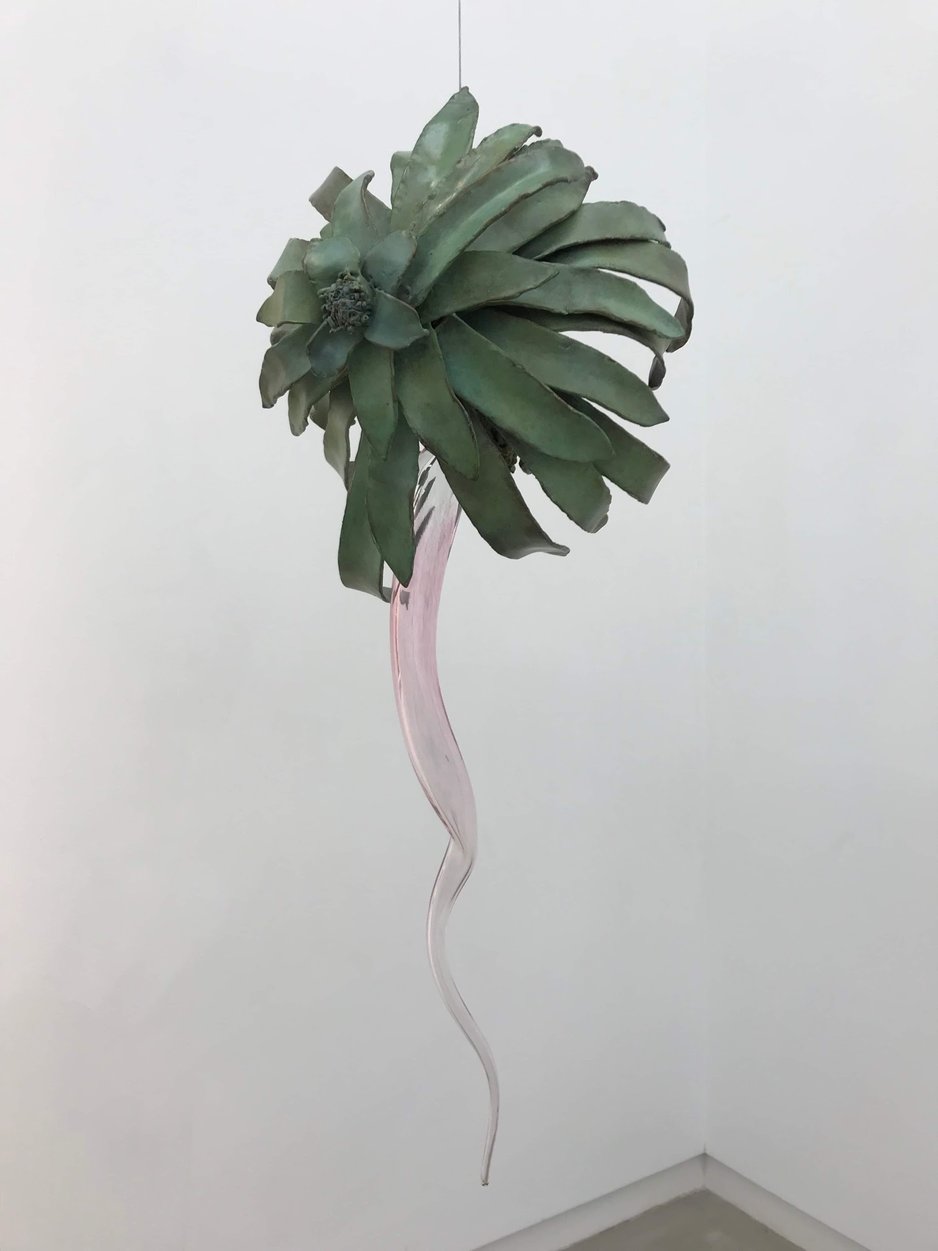 In her photographic series Sitio Roberto Burle Marx, Bauer has captured beautiful images that use glass reflections to create double images of architecture and the gardens of Sitio Roberto Burle Marx in Brazil. The significance of Roberto Burle Marx and this UNESCO Heritage site named after him is profound, since the park hosts over 3,500 species of plants from the Brazilian rainforests. Burle Marx is an activist for conservation of the rainforest and, as a landscape designer, has left an indelible mark on public gardens throughout the world. The photos themselves are beautiful pictures that show how gardens and architecture can so easily meld into and complement each other, creating beauty, function and sustainability. 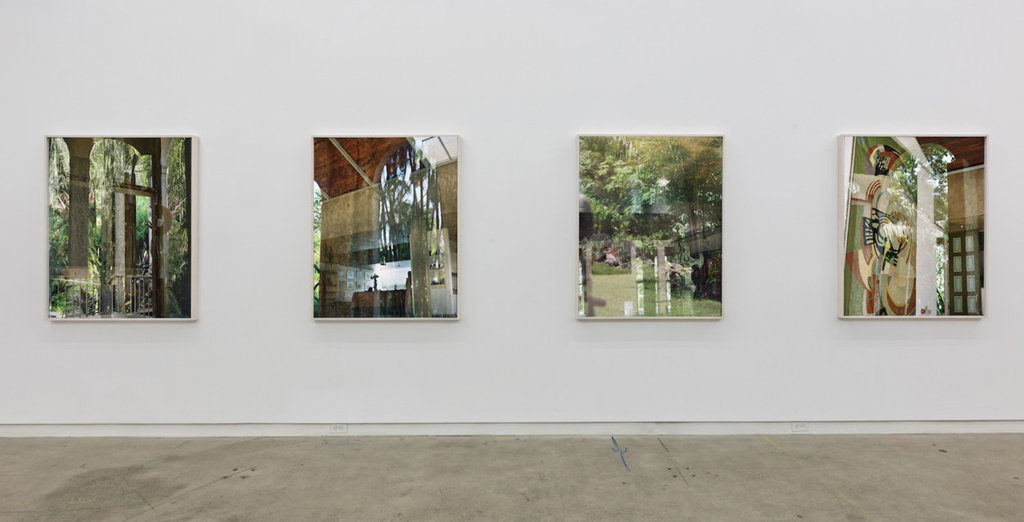 Maryanne Casasanta’s video piece Morning And Its Summer is a 7 minute 23-second long video that features a hand tracing the patterns formed by woodworms under the bark of trees. The tree trunk the artist is engaging with is presumably the same that audiences passed by in front of the gallery, an integral part of the gallery’s sidewalk garden. The work is mesmerizing and simulates the haptic, tactile senses of navigating through touch. The gesture of tracing the lines in the wood demonstrates the performative potential of using naturally generated forms as a blueprint for directing human movement. 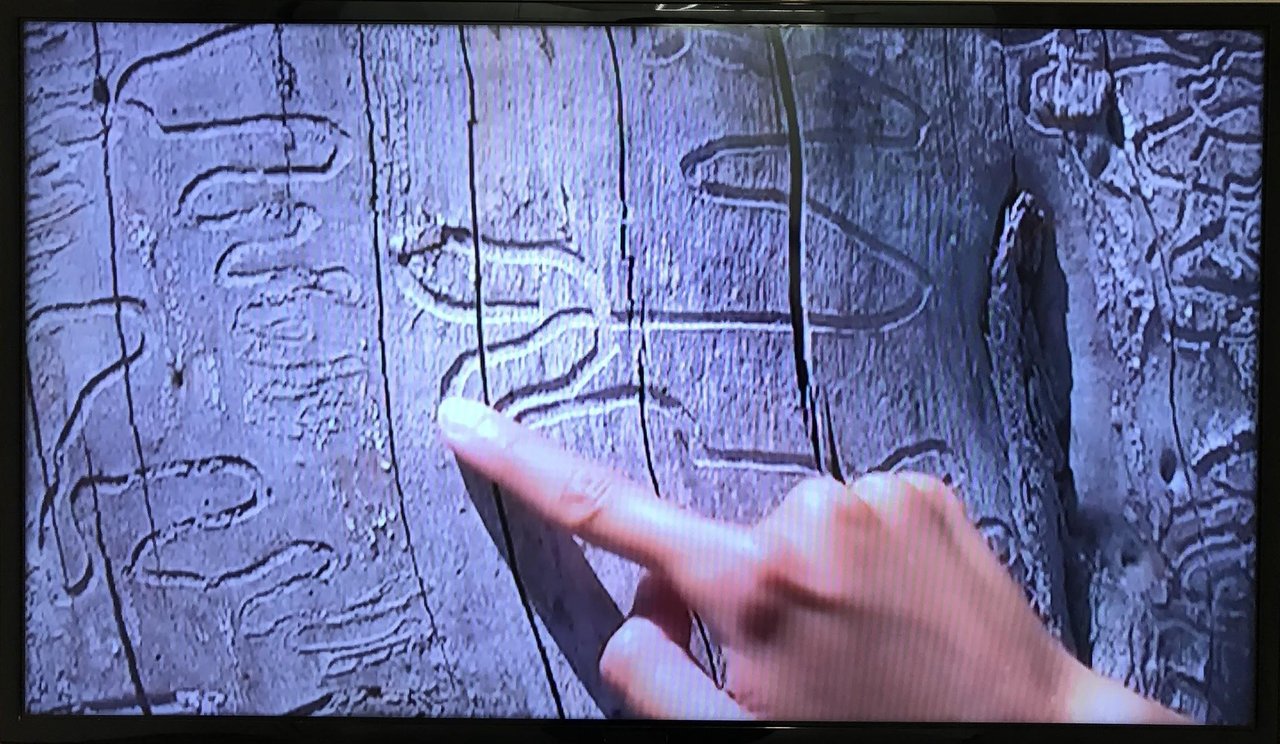 Casasanta’s remaining pieces are a set of four archival prints that depict a woman’s shadow on a peach-coloured backdrop with a flower in the foreground covering either the nipple or crotch of the figure. The titles of the pieces are Italian words for rose, sun, honey and violet. The figure casts a very strong silhouette, reminiscent of commercial models in magazines and advertisements, and emphasize the traditionally feminine features and curves. The plucked flowers and their placement on the body may signify the puritanical notion of virginity and the act of being “deflowered” by the viewers gaze. The ambiguity of meaning, its soft aesthetic and the use of stock imagery gives the series elegance and charm.

In the central space of the gallery are Vanessa Brown’s Robe for Sleepwalking and Robe for Daydreaming. The two pieces stand side by side facing the guests as they walk in. Situated on circular plinths and hung on black wire dress forms, the works are the most significant pieces in the room. They resemble invisible or disembodied twin figures in night robes waiting patiently to be approached. Robe for Sleepwalking is adorned with beads, shells and copper, while Robe for Daydreaming is decorated with dried, plastic and pressed flowers. Both pieces are presented as sculptures but feel like remnants of wearable art or costumes from performances. One can imagine wearing the pieces and attempting to enact the activities suggested by the titles. Together they seem to evoke a desire to remain between the waking life and the dream world, never fully in either and never fully removed. The decorations on the robes are presumably charms to respectively promote wakefulness or sleep, such as alchemical symbols or flowers from alternative medicine practices. 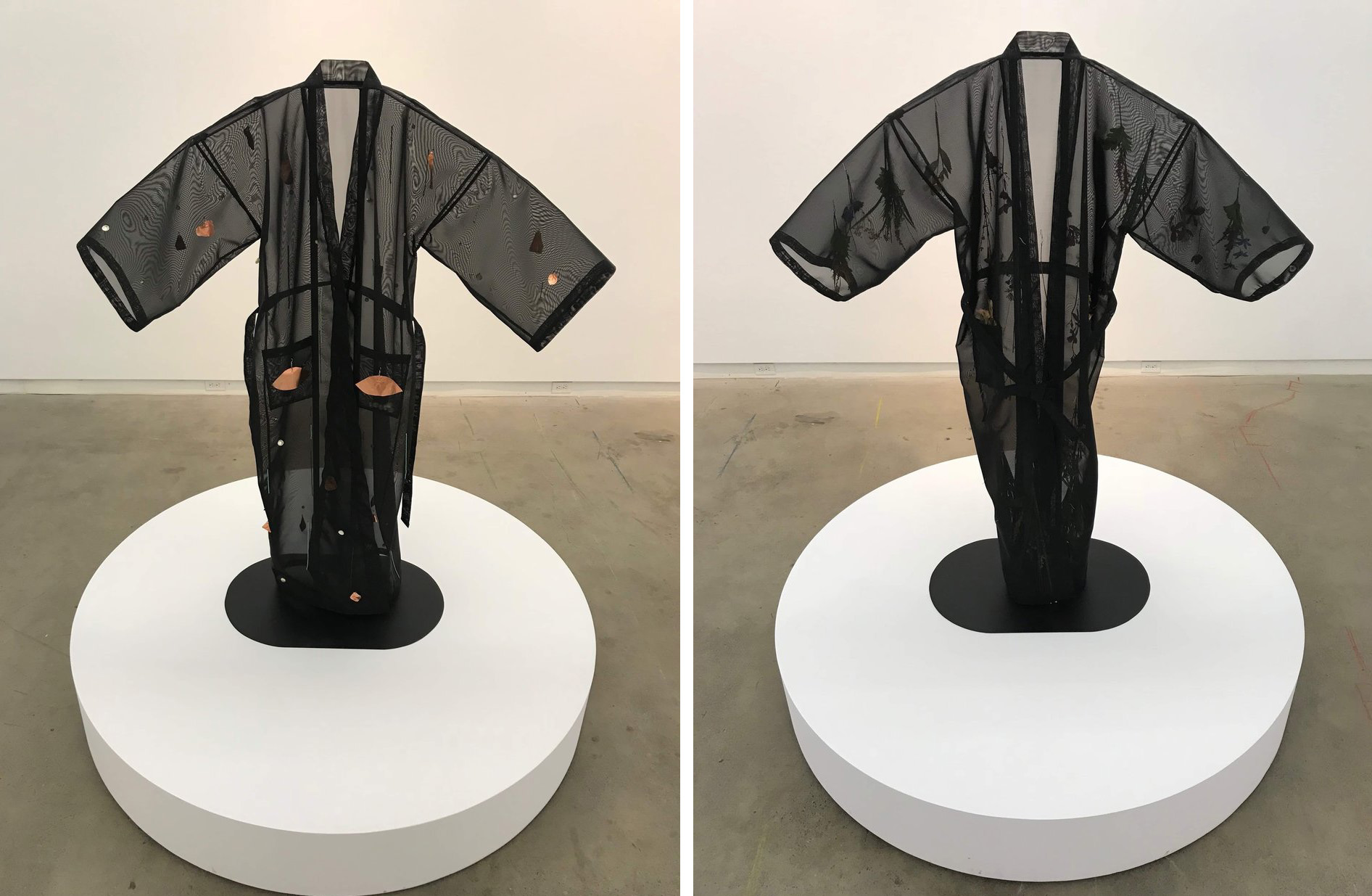 The exhibition is a wonderful collection of artworks that demonstrates how small acts, such as building a garden and taking care of plants, can be used to reflect the broader cultural and environmental issues we face today. No small act of resistance or kindness goes unnoticed and the exhibition celebrates this fact with enthusiasm, intelligence and fascinating aesthetic explorations.