John Hartman is a painter and a storyteller. Ask him, and he’ll tell you about every detail in his paintings. Each pictorial element helps describe a place and the people connected to it. His latest body of work is focused on other Canadian storytellers and the places that are important to them.

“These are the most realistic paintings I can make”, says Hartman of his new portrait / landscape paintings. Realistic in this case is not the ‘realism’ of photography or renaissance perspective. These paintings are realistic in the sense that they express the character of people and their relationship to special places. 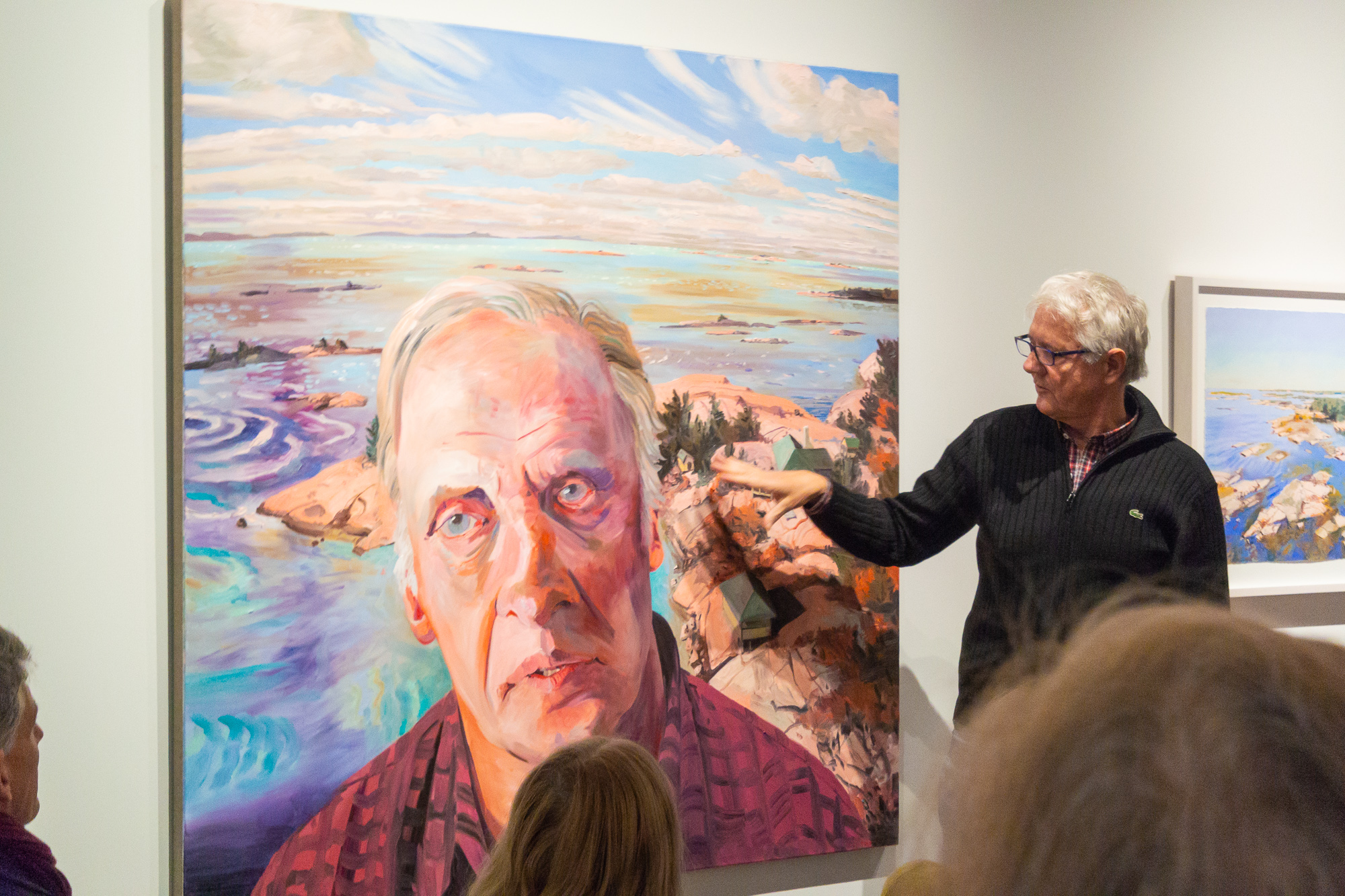 In the People and Place paintings, Hartman has painted the portraits of several Canadian writers including Ian Brown, David Adams Richards, Esi Edugyan, Lisa Moore, Linden MacIntyre, to name a few. Each author appears to float in the air above a landscape that Hartman has asked them to choose: a place that may not necessarily be their home town but inspires them and restores them. 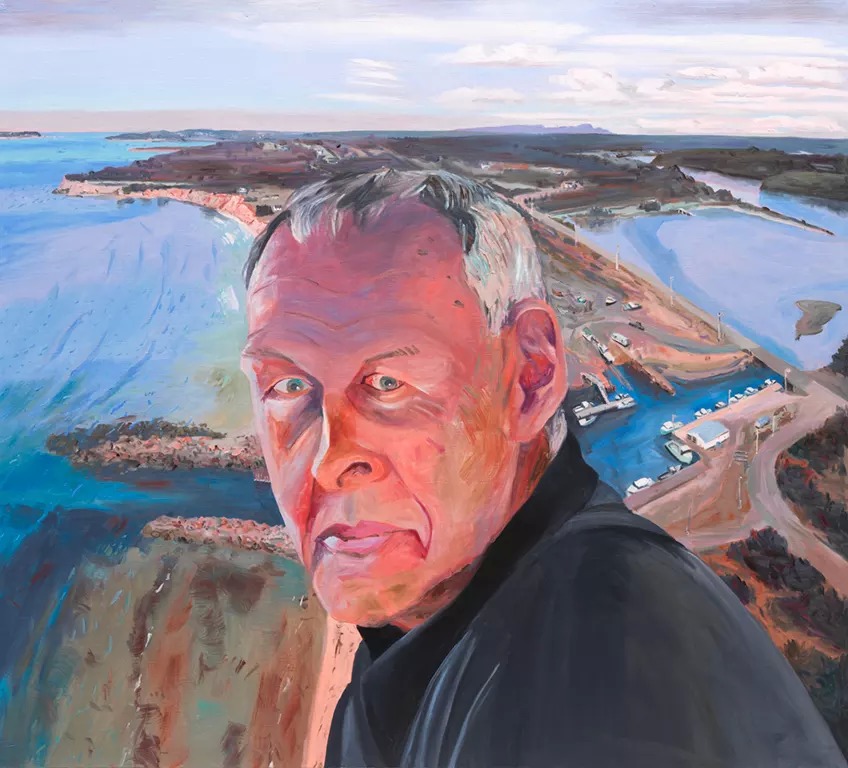 Hartman starts by documenting both his subject and their chosen place. A series of photos of the writer are lit from various angles to allow him to match the direction of light in the landscape. In addition to making sketches, he photographs the landscape location with a drone to get the aerial perspectives that are so pervasive in his work. He’s careful to record all the aspects of the place that are meaningful to his subject.

Hartman plans the painting with red outlines on the canvas. Typically, the view is from above, the horizon is in the upper quarter of the painting, and the figure is shown below the horizon. He distorts the landscape around the figure to emphasize important features, ensuring meaningful details are not hidden. In some paintings there are additional elements that float in the space behind the foreground figure such as the devil falling to earth in David Adams Richards above the Bartibog and Miramachi Rivers. Hartman works and rearranges this line drawing until he is satisfied with the composition and the narrative. 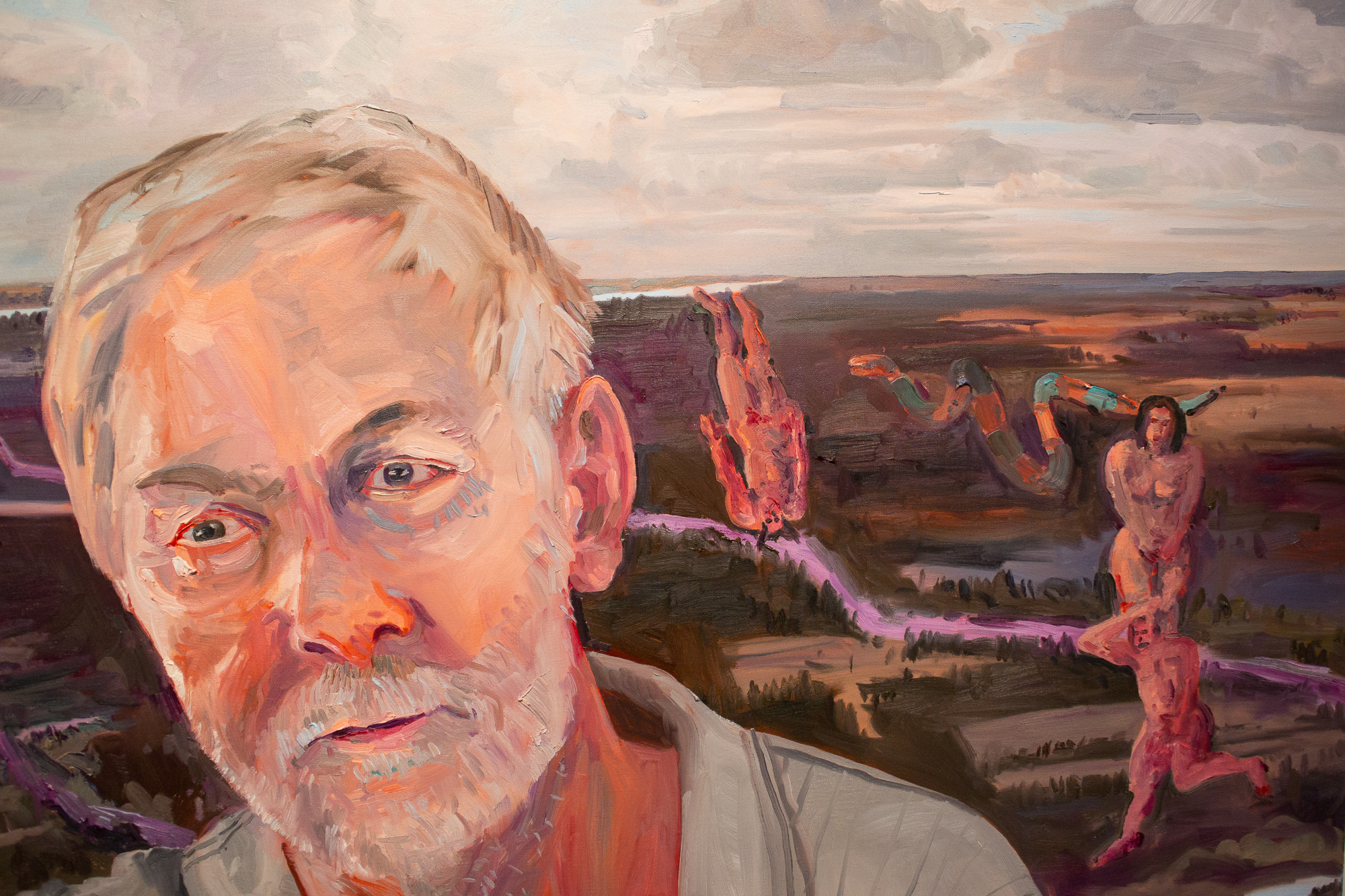 Once he has finalized the composition the colours are applied. He paints in oils with energetic and expressive brushwork. He starts at the top of the canvas and works his way down, painting wet-on-wet allowing the colours to blend with the brushstrokes. Using the same colour palette in the figure and the background establishes a visual connection between the two. He’ll adjust tone and colour in the background to ensure there is always a clear edge between the figure and the landscape. 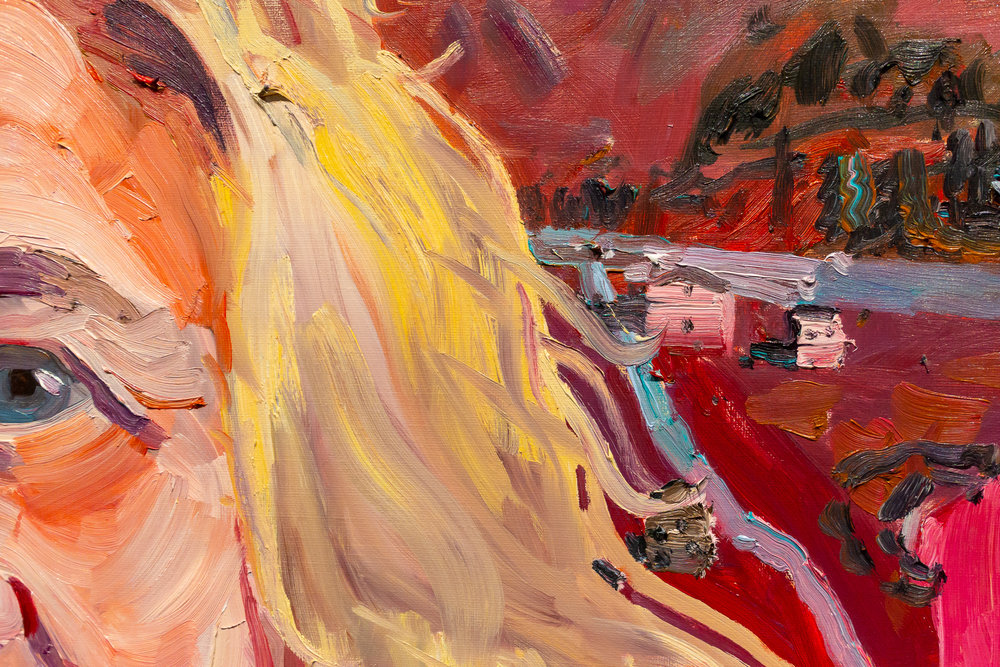 The figures are larger than life, brightly lit and delineated in broad brush strokes. Hartman likes to paint people older than 45 when “your face tells the whole story and you can’t pretend to be anyone other than who you are”. These are not always flattering portraits, but they express personality and mood. David Adams Richards looks out to the space behind us. Esi Edugyan looks upward and to the side. The impression is of deep thought, as though they have let their minds wander and fly out over the landscape of their imagination. 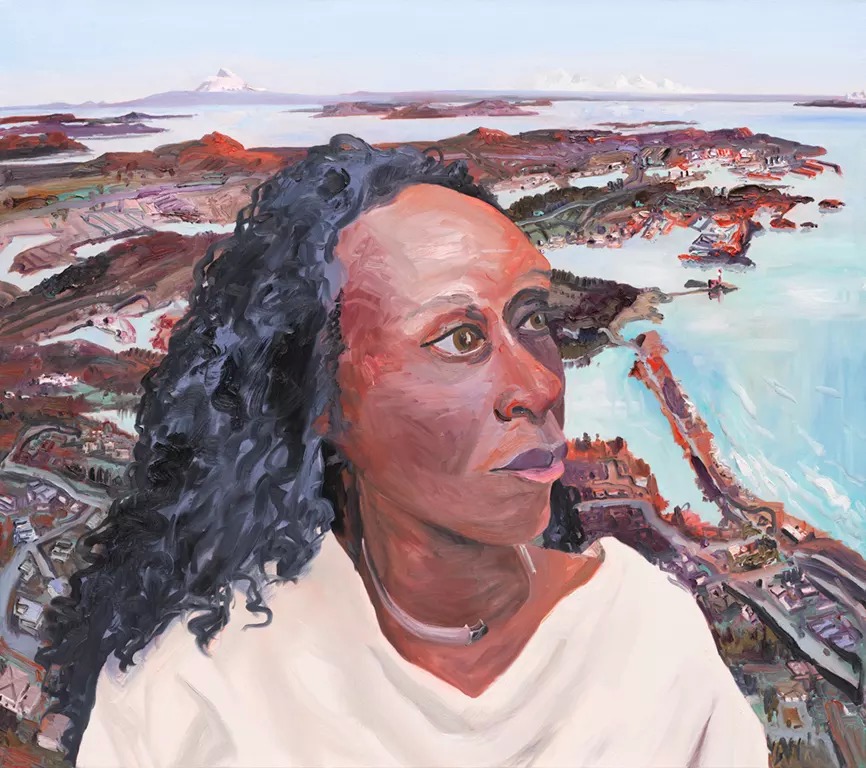 Once a painting is completed, he sends a photo to the writer and asks them for a short text describing the place and its meaning. These companion texts have been mounted on the wall next to the paintings. The descriptions will appear on the facing page of each image in a book that is being planned in conjunction with a traveling museum exhibition, which is scheduled to start in November 2019.

Hartman sees his paintings as part of an effort to re-establish the narrative and descriptive role of painting that he feels was conceded to film and photography in the last century. He has been working on this project for three years and he feels that he’s found a direction that opens more possibilities the further he pursues it.