This show, featuring nineteen seductively colourful oil paintings by Sean Yelland, takes up the main floor of Ingram Gallery in Yorkville. They are photorealist in style. The subject matter is the urban landscape, mainly focused on various Toronto neighbourhoods. They are recent works – all done in the last year or so.

Yelland explains that his works are not merely essays in photo- or super-realism. He is not primarily motivated by the traditional concerns of photorealism. These are to make explicit art’s employment of technology, that goes back centuries through the use of the camera obscura for example, and the objective of contrasting the photographic, i.e., mechanical, image with how we naturally see things in the world. Rather, he tells me, he uses the photograph as an aid in creating a narrative. Narrative is the central theme of his work.

Indeed, the titles of his paintings are an integral part of each of them. For example the title of his painting Beyond Help is a play on the wording on the sign on a hoarding that reads ‘HELP WANTED’, and which ironically sits in a largely disused parking lot. Or again, his painting titled Neighbours shows several people waiting at a bus stop who stand at a marked distance from one another (painted before the COVID-19 crisis). It can be understood, therefore, as a commentary on Torontonians’ social alienation – we live in close proximity to one another but often lead relatively solitary lives.

A mood of alienation is shared by most of Yelland’s paintings. By and large the streets and corners of the city he paints are empty of people. Even when there are people they are alone. A sense of loneliness is felt in his painting Connection, for example, where in the centre of the picture a woman sits on a bus in the evening dusk. On the other hand, cars and other vehicles are frequent inhabitants of Yelland’s urbanscapes. Their presence creates a feeling of melancholic abandonment – reminders of people who are elsewhere. The occasional dog or bird accentuates this feeling.

But while Yelland is disinclined to view his works as straightforwardly photorealistic, I cannot help but feel photorealism plays a central role. His earlier paintings include, for example, a series of images based on layered reflections in storefront windows. This was a favourite motif of many of the original photorealists such as Ralph Goings and Richard Estes. More generally his subject matter is very much in the vein of photorealism which, growing out of pop art in particular, has had a predilection for images of everyday objects and scenes, such as urban streets, storefronts, cars etc. His appears to be a photorealist aesthetic at its core.

What some see as a limitation of this style is that it ineluctably refers back to the mechanically mediated image. The viewer, in other words, never sees the scene and objects the painting depicts themselves but sees instead the photograph of them. The viewer is always thrown back to the surface of the painting, to how the painter is able to create the ‘convincing’ illusion of the objects’ being before the eye. This is not a problem for the photorealist painter insofar as it is what she wants to emphasise or celebrate. But that apparently is not Yelland’s main goal.

Standing directly in front of the paintings, Yelland points out that their surfaces are obviously painted. Also, he sometimes makes the colours in the paintings more saturated than they appear in the original photograph. As well he is apt to alter the image in some way or other, e.g., add a moon to the night sky or a passenger to the bus, or again to edit out a person as he did in his One Way Ticket. All these suggest that photographic accuracy is ultimately subservient to his objective of creating a particular narrative.

Still, his works are so photographically realistic that it is difficult to interpret them as deliberately manipulated in these ways. The viewer is inclined to read them as literal rather than as metaphorical in this sense. For example, the old television set he depicts outside the front of the house in his No News Is Good News seems to have happened to have been there – accepting its relative prominence in the picture – hence its narrative importance may be missed. Then the title, of course, becomes the entry point for the narrative.

Undoubtedly Yelland’s paintings are alluring in their compositions and colours. He has a wonderful eye for the abstract details in an image. Moreover, as a long-time resident of Toronto I recognise his works collectively as a love-letter to the city. He tenderly captures the essence of the place.

Images are courtesy of Ingram Gallery. 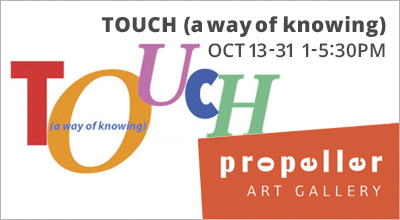 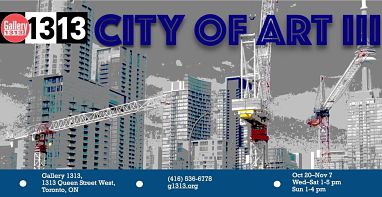