The brand new Patel Brown Gallery is the result of a partnership between two established curators and gallery directors, Devan Patel and Gareth Brown-Jowett. Previously Patel ran the Patel Gallery, in the east end of the city. Brown was director of Division Gallery in Toronto and co-founder of the Toronto International Art Book Fair.

The opening of the gallery, of course, occurs at an inauspicious time. All the same, they have staged an impressive pair of inaugural exhibitions, titled Fair Adaptation and Adapt and Pivot, each packed with great art.

The first of these exhibitions, Fair Adaptation, seizes on an opportunity resulting from the building’s renovation. Artist Nicolas Fleming had originally designed a similar space to house artworks as part of Montreal’s Papier Art Fair, scheduled for this June. But the pandemic meant the show could only be presented online. Patel Brown has allowed Fleming to realise his design physically after all. The installation is built around the works of Shaheer Zazai, Mia Sandhu, Kim Dorland, Luke Painter, Vanessa Brown, Shellie Zhang and Maya Fuhr. In addition Fleming has modelled from construction materials forms resembling various domestic items including a bench and a shop vac. The art pieces are intimately scaled, largely inspired by the crafts, e.g., stain-glass windows, curtains and carpets. These are set in several small rooms and portals. Fleming’s installation, I think, is a sucessful work of Gestalt, that is, he has produced something more engaging than the sum of its parts.

Installation view with Luke Painter’s drawings with From Floral to Geometric, 2020, ink on paper 60 x 80 in (diptych)

The back half of the gallery hosts the larger exhibition, Adapt and Pivot. This features the works of Shary Boyle, Vanessa Brown, Nicholas Galanin, Alexa Hatanaka, Anique Jordan, Rajni Perera, Nep Sidhu, Howie Tsui, & Naama Tsabar. As Jenna Faye Powell explains in her accompanying essay, the title is “a loose thematic to illustrate key tenets of the new gallery.” These are to be vigilant and flexible in addressing topical issues. And especially topical today, of course, are protests against anti-black and anti-indigenous racism. So the viewer is encouraged to consider the works – most of which were produced several years back – in terms of these themes. This is not much of a stretch given that many of the artists are already immersed in the identity politics centred around the issue of racism in particular, e.g., Jordan’s photographic self-portaiture titled Darkie and Boyle’s White Privilege.

Interestingly the influence of craft is carried over to many of these works too. Clothing, beads, fabrics, ceramics and glass are all media featured in the exhibition. The theme of craft is addressed directly by Vanessa Brown who presents oversized earrings made from steel and glass titled Semaphore. She is highlighting the contrast between traditionally masculine industrial materials like steel and the traditionally feminine interest in jewelry. Hatanaka offers up delicately stitched garments made from pieces of Japanese paper, all hand printed in beautiful colours.

Why is there this preponderance of craft-inspired work? Powell suggests that it reflects the growing influence of female artists, who historically as outsiders have been more receptive to craft. But I think there is something else at work as well. Most of these artists produce objects whose function is to make some statement or other. They are propositional, to paraphrase conceptual artist Joseph Kosuth. It is in this sense that the works are craft-like, that is, function-based. More precisely, as Powell claims: “no art is apolitical, especially now,… artists have been long-present in the campaign against racially based inequities.” I take Powell to be saying that the artist now is drawn, perhaps by moral imperative, to address issues around race and identity above all.

There is no doubt an urgency in facing up to the racial inequities of society. But this emphasis shifts the focus of artmaking to giving voice to particular groups, as we witness in much of this show. Artists take on a voice specific to their race, gender, ethnicity and so on. This in itself is a good thing of course, but taken to its logical end it entails a fragmentation of our visual culture. Art that speaks across all of society, that addresses universal themes, recedes; it narrows, instead, to commentary on contemporary injustices, both in society as a whole and in the context of the representation of minority groups in the gallery itself.

Maybe my lament is misplaced, in that present political conditions make such preoccupations in art inevitable, given the importance of these issues. Perhaps also the notion of a universal voice is a myth, long since busted. But there are works in this exhibition that hint at this possibility. These are Naama Tsabar’s Work on Felt (Variation 15) Black and Tsui’s prints located together in one room. The former is simply a large piece of black felt with wires pulling two of its corners away from the wall. Plucked, the wires’ sound is amplified by a speaker. It is beautiful in that hard-to-pin-down minimalist sense. The latter, Tsui’s slightly ghoulish drawings and print, reverberate in their own quiet way. 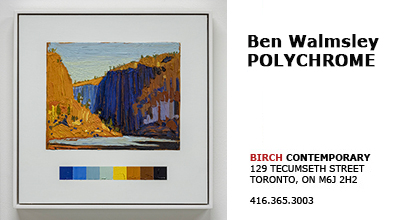