Artists, friends and visitors were treated to a visual celebration of works by current and past members of Propeller. The evening was a wet one though a little rain didn’t dampen the enthusiasm of the night’s Agenda. My first visit to Propeller Centre was 20 years ago when it was located at 96 Spadina, in the Darling Building, back in 1996. There were some great exhibits there and it was a time when the art scene was booming along Spadina. Propeller occupied such a small space that the artist sitting the show had a chair in the doorway. There were many galleries at 80 Spadina, 96 Spadina and 401 Richmond Street, that you needed a whole Saturday to visit them all. Around 2000 galleries started to move to Queen St. West following MOCCA, Edward Day, Deleon White  and Clint Roenisch. Small window galleries had already started the Queen Street West scene including ZSA ZSA, Angell Gallery, Spin Gallery, SIS BOOM BAH and loop among others. Propeller’s move to 984 Queen Street West in a prime location gave it excellent foot traffic as visitors migrated from gallery to gallery. We all loved its bright yellow portal and the two airy galleries, a perfect space for two solo shows. Rents on Queen Street West  started to go up and again it was time to move further west. Artscape had a gallery space at its Triangle Loft Building at 30 Abell Street and Propeller moved into its current location in January, 2015. Due to street construction it has impaired walking visitor traffic but the Gallery has spread the word and art enthusiasts have a way of discovering where to look.

The exhibition celebrating the gallery’s 20 years shows works by members who are with Propeller for a long time and new ones, some of them just joined recently, side by side. Board members Joseph Muscat and Frances Patella both had works in the exhibit and were keeping the party going. Another long term member, Dominique Prevost, had a wonderful water colour work and Gwen Tooth had a vibrant abstract piece in the show. 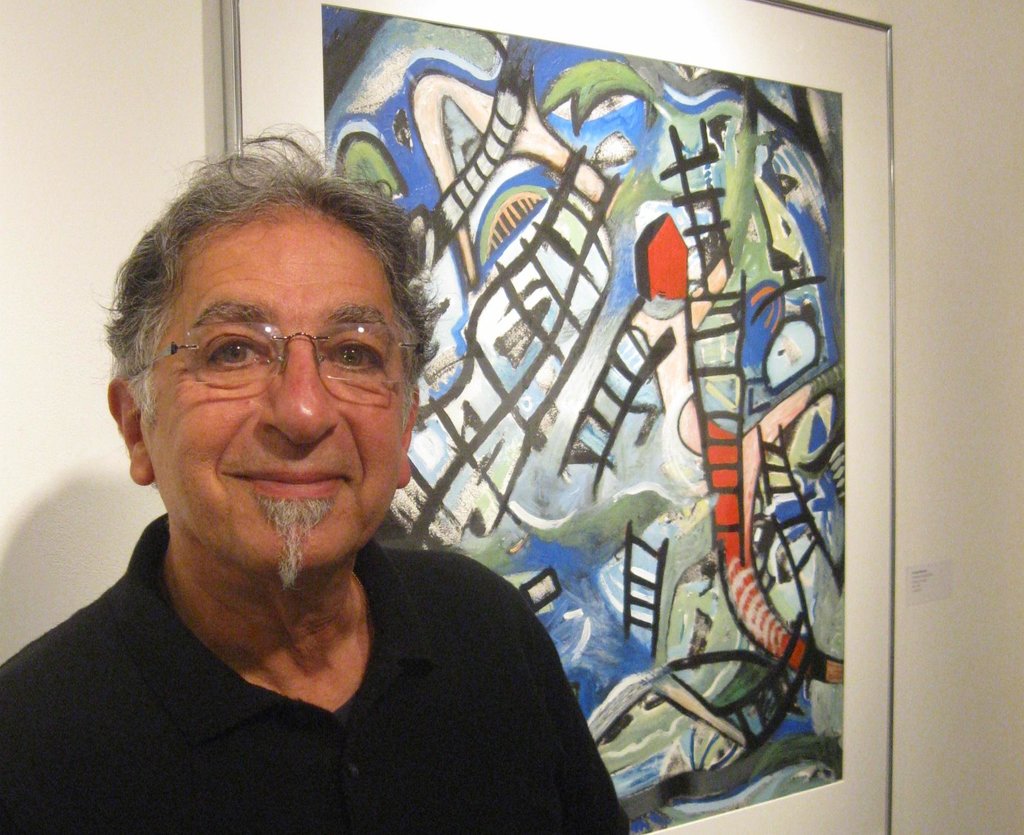 Board member, Joseph Muscat with his painting Board member and Co-Chair, Frances Patella in front of her work 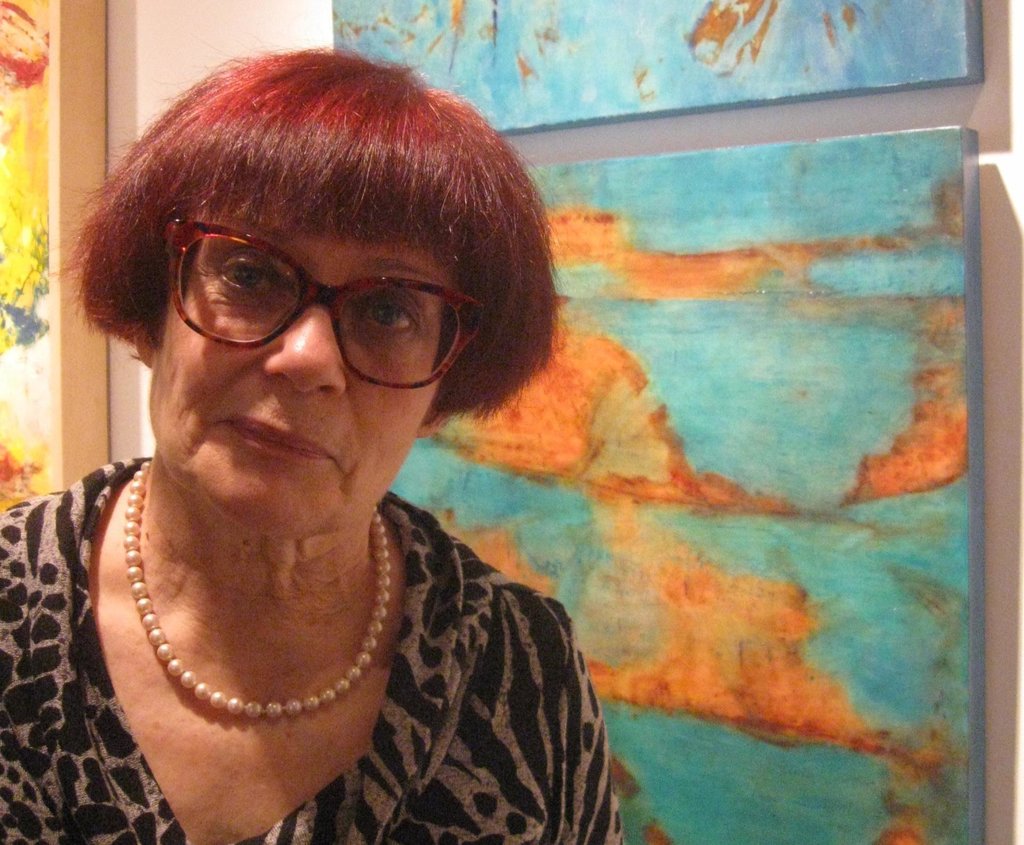 Anastessia Bettas with her piece

Propeller  Centre for the Arts is celebrating 20 years and no doubt looking forward to the next 20 years and what that will bring. Being around for 20 years is in itself no small accomplishment and kudos to all those that worked hard to keep the fires burning.

A Reflection on 20 years at Propeller Ringing in 20 years at Propeller last Thursday night, I was introduced to a group of artists, collaborators and most importantly friends, who for the last two decades have built a widely regarded and successful artist run centre. The night’s festivities were ones of excitement for the future of Propeller. Frances Patella, Co-Chair and artist at the collective, began the evening with birthday cake and warm words to the intimate crowd gathered before her. In hushed tones, Patella revealed the plans for Propeller, goals centered around more sustainable governance. Specifically, she aims to increase membership, encourage outside groups to rent the space for exhibitions and engage with the surrounding community. One mentioned project was a summer arts festival in the adjacent city park. As the evening wore on, my wanderings brought many welcomed encounters with Propeller artists, both past and present. I had the pleasure of discussing Gertrude Kearns’ fascination with soldiers and members of the Canadian armed forces. Before us were her three portraits of military commanders. The prints are a bold blend of black contours and overlapping text, where each subject is rendered with a fresh humanity. The relaxed pose and calm assurance of the “Protector who dares to win” disarms each viewer as they dare to glance at the work. Kearns, herself has spent sometime in Afghanistan as Canada’s official war artist and is currently in residence at the Royal Canadian Military Institute of Toronto. Next, I was drawn to the organic lines and solemn monochromes of Keijo Tapanainen’s “Bolero,” which incited a quiet conversation with the artist, a Propeller member since 2000. I was surprised to learn that Keijo’s entrance into the world of fine art was one of happy chance. Though not classically trained, his mixed media collage reflect a creator well versed in the histories of art. The influences of Matisse, Picasso, Hannah Hoch, John Heartfield seem subtly stated and yet, rendered in a contemporary language accessible to the uninformed viewer. Eventually, as the evening winded down I came across Propeller’s director, Nathan Heuvingh. As the administrative head, his duties include the complex programming of the centre. This task, though modestly described, involves curating and installing upwards of 40 shows a year, a new exhibition takes place at Propeller every two to three weeks. The 30 odd members of Propeller are expected to exhibit at least once every two years. As the din of the party roared around us, I was able to pose a crucial question to Heuvingh. How has Propeller maintained its success, especially as more and more artist run centers struggle to survive? His answer was immediate and unflinching. The members, who may come and go over the years, but maintain a dedication to Propeller and its existence. He emphasized the collaborative nature of Propeller, where not only group exhibitions attest to this, but also the volunteers that organize, install and market each show. The second ingredient he stressed, is the artistic license offered to its artists. The gallery operates outside of any grants, and as such they are not restricted by the inherent clauses and guidelines of government funding. With these artists, their art, and their distinctive presence in the gallery, I only expect further success for the dynamic collective at Propeller.