Black Friday tells a story in a dreamlike state, of the gulf’s relationship with western capitalism and religious conservatism. With images of a temple-like interior meshed with scenes that one would come across in shopping malls, it shows a vision of the limbo state that is created between them. Western ideals that are usually condemned in Islamic culture are forgotten in shopping malls where the two worlds come together under a more powerful structure – Capitalism. The exhibition highlights the artists exploration into the concept of Gulf Futurism. 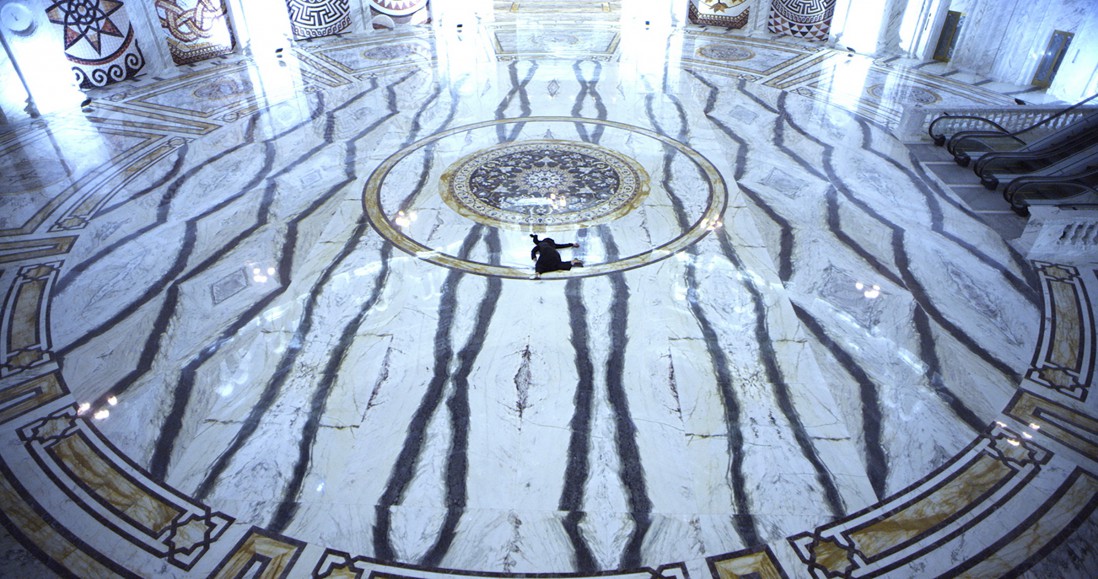 Walking into the completely dark gallery, it takes time for your eyes to adjust, and the way forward is guided by the blaring sound and flashing light coming from behind the curtain of the first room. Inside, the video plays on a single long screen, towering over and intimidating the viewer. Reminiscent of religious paintings, the long narrow screen commands the room. The effect is heightened if there is no one else there and the screen holds your stare as you stand vulnerable in the dark 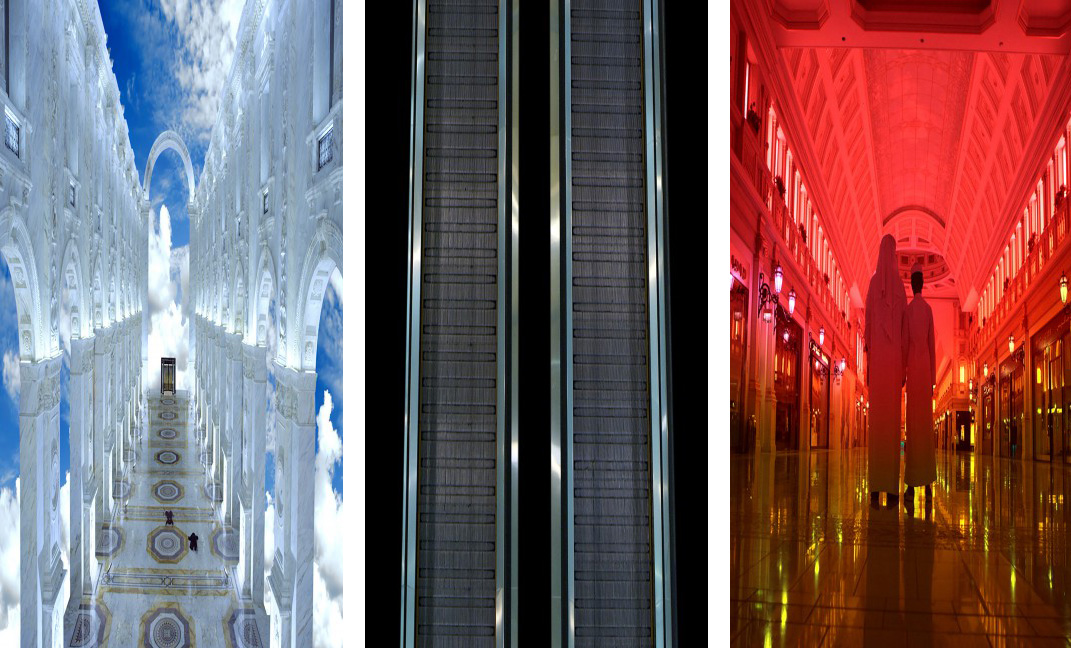 Separate images are cut and pasted together in a way that is disorienting, at times with kaleidoscope movements and spinning floors that melt and distort. It comes together to create a vision of this space with no exit and no entrance, with escalators leading to higher floors and escalators rotating endlessly like a lucid dream that one is stuck in, unable to find an end to the loop. Certain tropes are referenced, and at some points it feels as though one is stuck in a program in the Matrix. Altogether, the created space does not resemble a mall or mosque, but a surreal space between the two that is eerie and cold. The capitalist machine is visible in the endless loop of escalators which are mostly empty, sometimes with one or two passengers and shopping carts. Shots of these halls and lobbies show a space that oozes money and power, with floor to ceiling marble – empty, desolate, and monolithic in its feeling. 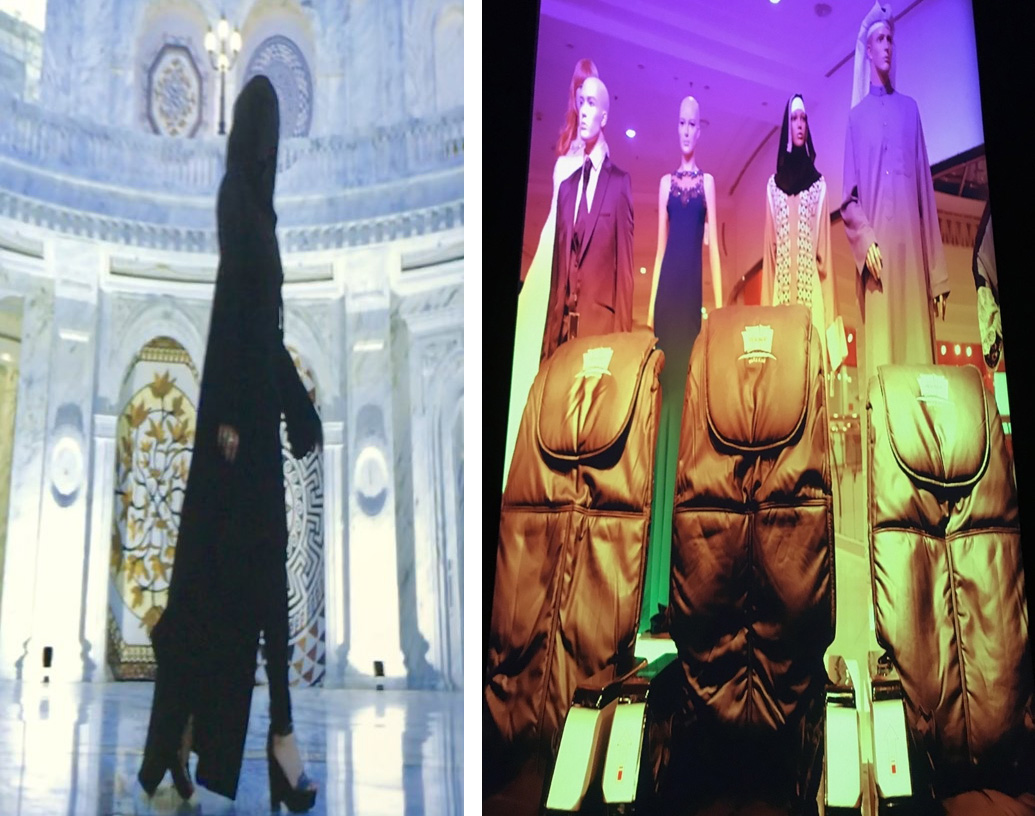 Figures appear at times walking away, and at times moving in and out of the scenes. One scene features a woman in a black abaya cloak, with her face covered, high heels and jewelry adorned, walking across the desolate halls she harkens to a truth that cannot be avoided. Later she lies unmoving on the floor. Another scene has mannequins standing, staring down with merchandise placed at their feet. Recognizable are some images of the Villagio Mall in Doha, Qatar with the serene blue-sky ceiling and canal cutting through the space. Meanwhile the sound is booming through the room and engulfing the space with an eerie alarm tone that matches the grandeur of the marble halls. 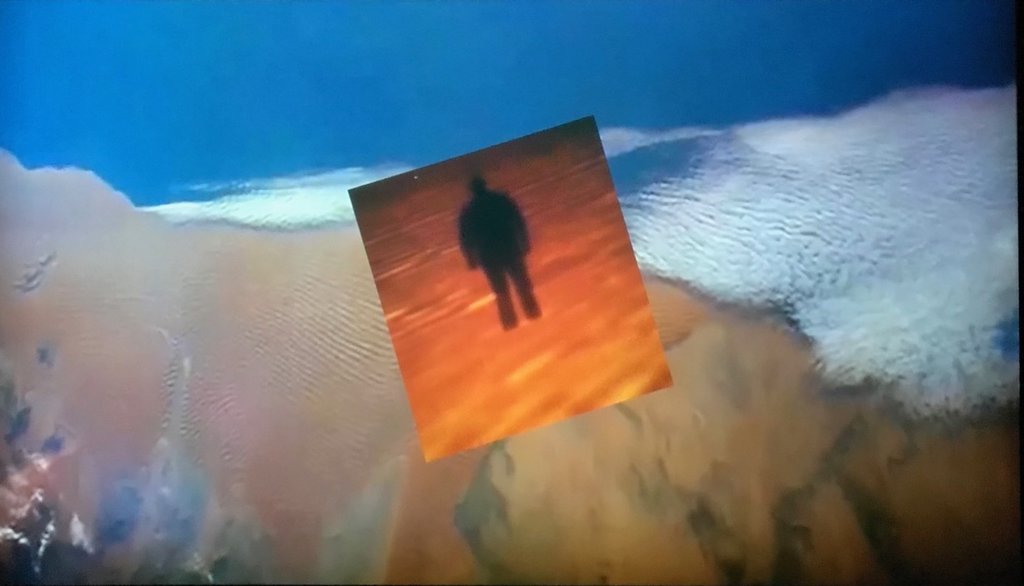 There is a second video in the exhibition called The Future Was Desert, which creates a narrative of a future after the end of human civilization. The voice in the background is reminiscent of a highly intelligent AI and seems to summarize the fate of humanity for the viewer. The desert is relevant in various ways to the narrative, described as being essentially free from the passage of time, it foreshadows the fate of humanity but also the state that it is currently in. The narrator goes back thousands of years, before any kind of civilization when the gulf area was lush, referring to it as the oasis of Eden. The area, which is of course now barren, was sucked dry to feed idols also barren of any meaning, and the future was then turned into desert. The video can be summarized with the one of the opening lines in Part One: “…the keys to your deep future, are kept in your deep past.” 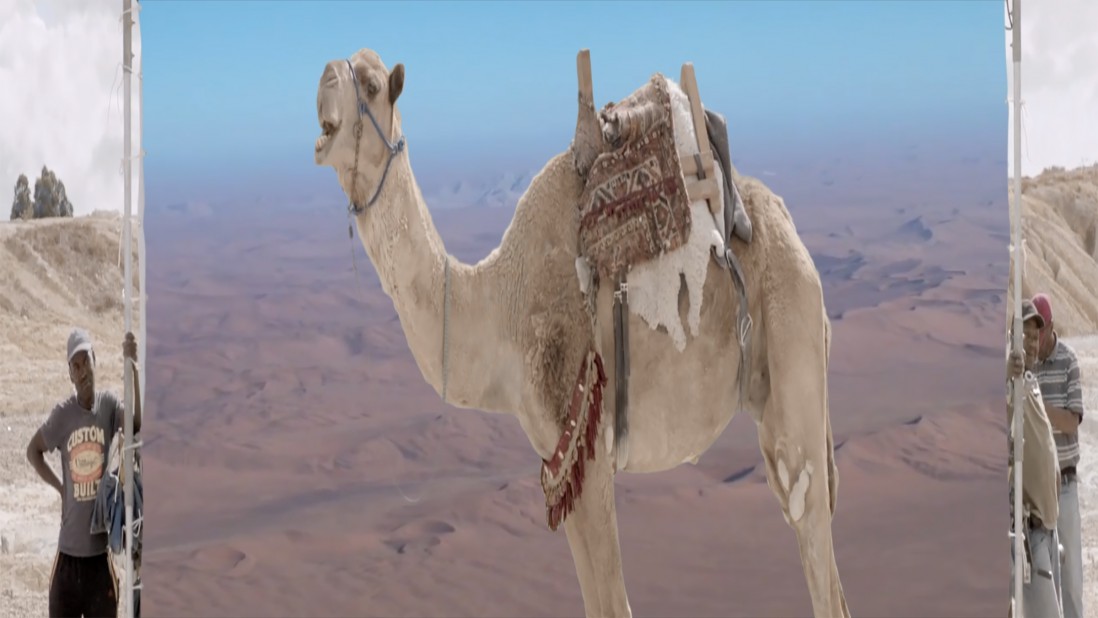