I attended the opening of Richard Jacobson’s exhibition of oils on panel paintings in April at the Abbozzo Gallery in the heritage-designated 401 Richmond Street arts building. The gallery is on the main floor, with much of its exhibited art visible from the corridor thanks to the glassy exterior of the show space. I’m safe in describing the structure as an arts building, since more than 140 of its tenants are artists, not to mention its housing of “cultural producers” of many stripes – the gallery itself, of course, being one of several. 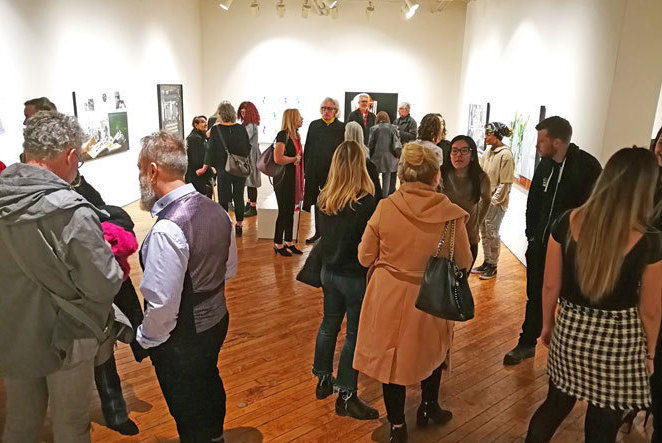 Arriving early enough at the vernissage to talk the artist, allowed me to get to the bottom of what Jacobson meant by “hyperrealism,” and how it differed from his definition of “photorealism.” The artist admits to using photographs as a reference, but ultimately doesn’t like his paintings to resemble photographs. A typical photorealist lick is to employ soft focus to blur details. Jacobson has learned that our eyes continue to refocus as we scan the subject at hand, whether its background or foreground. From this I speculated that the artist either has 20/20 vision or uses bifocals. 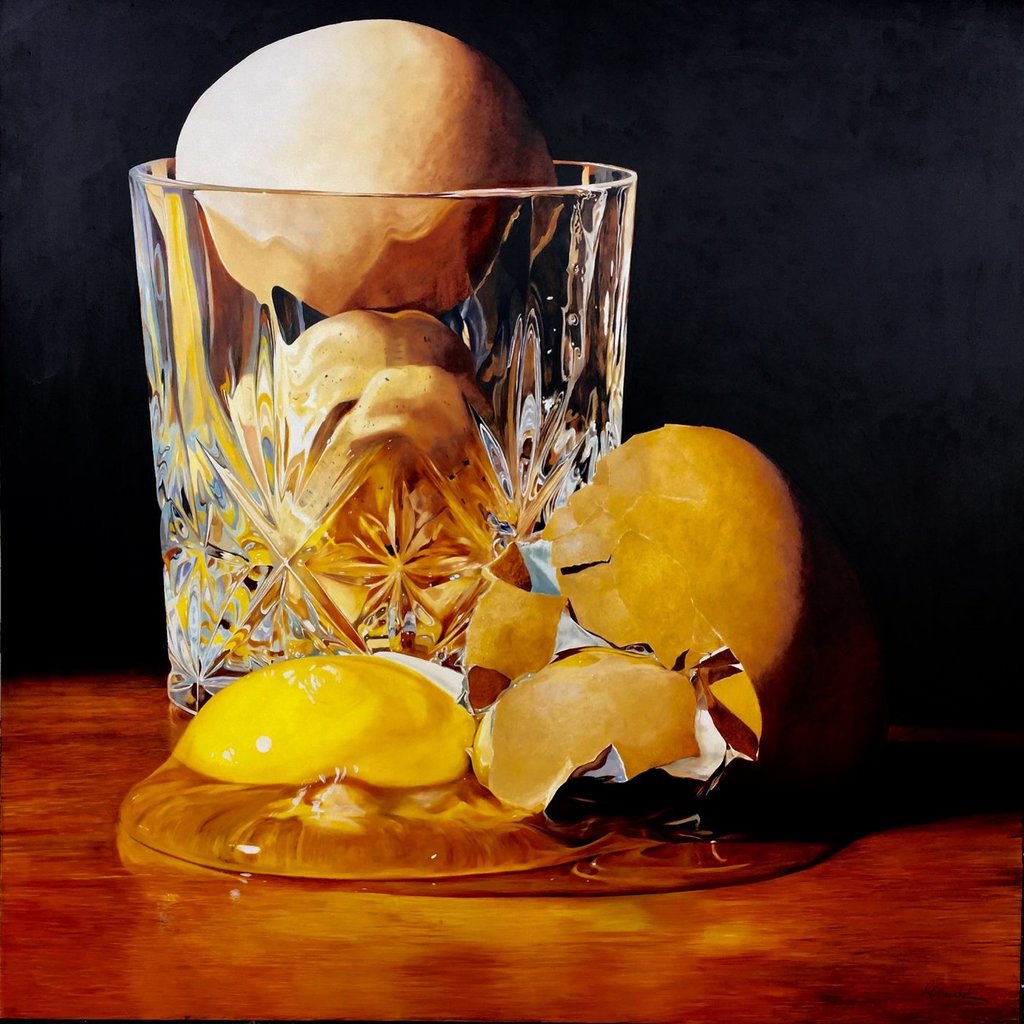 The works “Nailed Offering” and “Another Offering” intrigued me. The first work depicted a tulip with its stem affixed to the surface by a sturdy nail. The second painting displayed a chrysanthemum crudely taped to its background by duct tape, much as one would cross a T. The symbolism to any student of Renaissance or religious art would necessarily connect the works to the centuries-old tradition of depictions of Christ’s crucifixion. It surprised and intrigued me to learn that, to Jacobson the works alluded instead to something closer to home, domestic abuse. 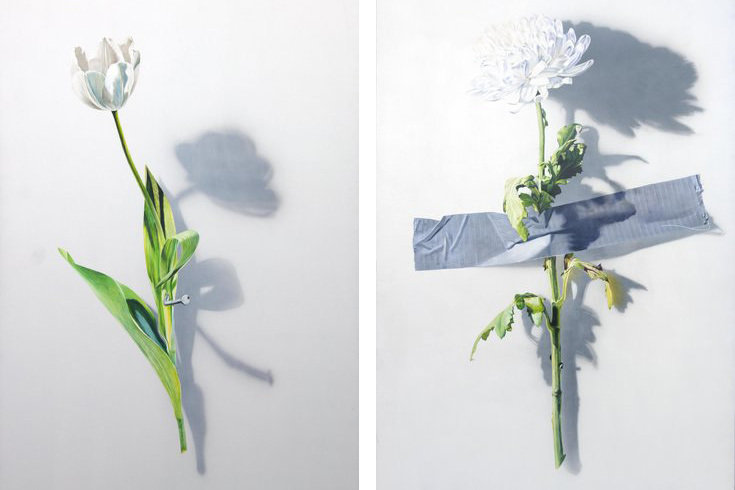 The panel, “Learning to Walk” clearly points to a childhood steeped in gunslinger lore and other pop culture references. Through the loving honing of details of family photos, book illustrations, toy guns, and assorted memorabilia, the artist captures and deepfreezes his subject. Through the act of painting, the objects and the memories associated with them, are fixed and immortalized into a kind of painterly afterlife. 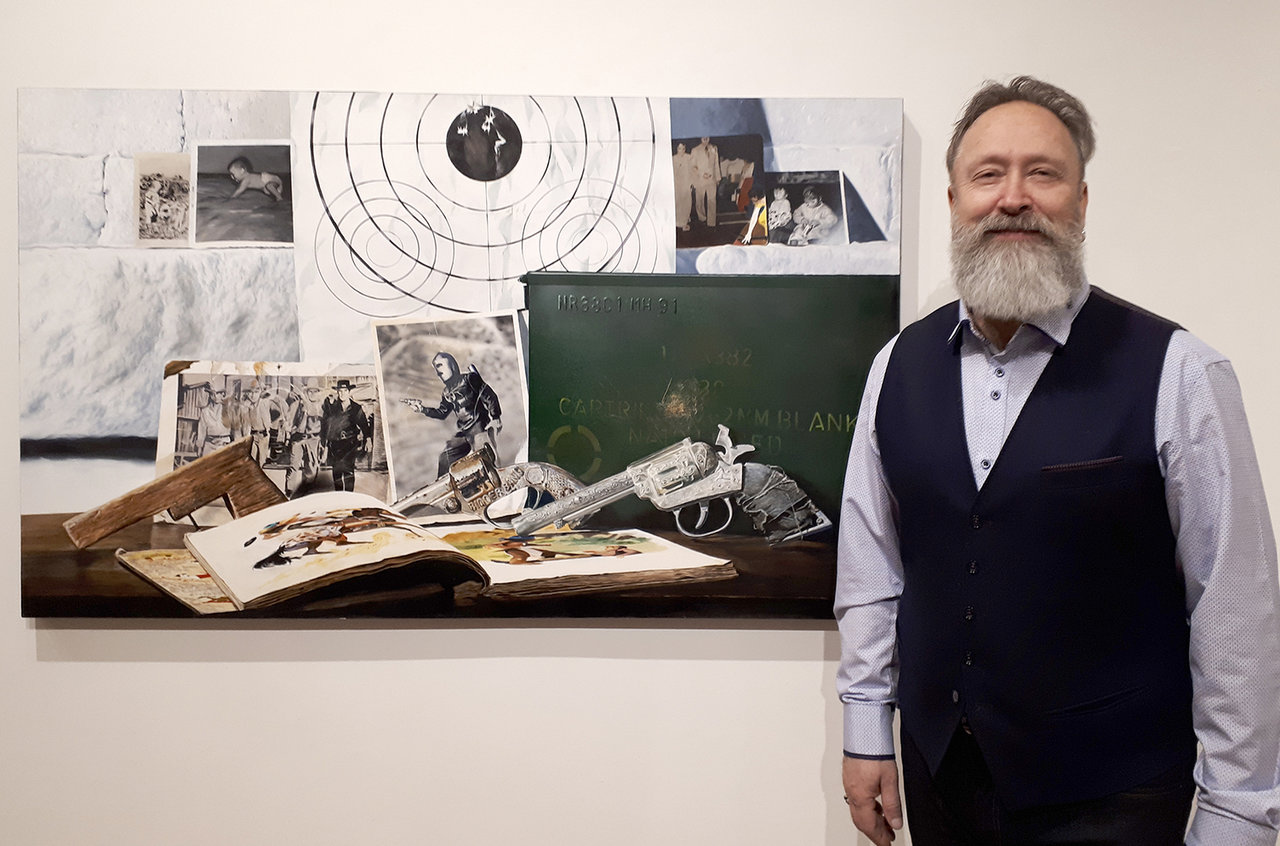 It is some of these qualities in the artist’s work that resonated with gallery owner Ineke Zigrossi. This being the artist’s first exhibition with the Abbozzo Gallery, she said, “Richard Jacobson’s high realism art and the notion, that there is always something more personal behind the subject matter, inspired us to offer him a full gallery exhibition.” 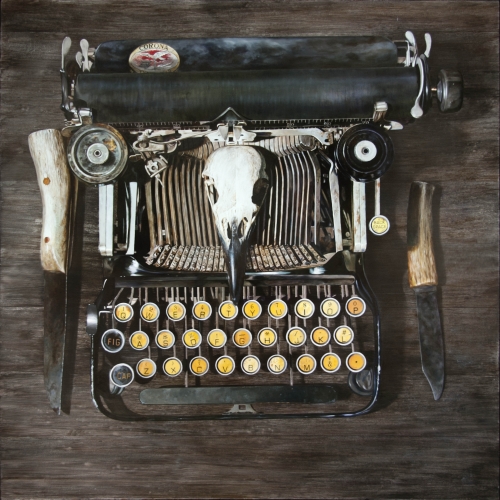 In response to my question of how she got into the gallery business, Zigrossi stated, “After Corporate life gave me the ‘Golden handshake,’ I was inspired to open a gallery from a friend who ran another gallery in Waterdown. I loved the environment of being surrounded by art, meeting the artists, the openings, the marketing, and talking to customers. My background is not at all in the practicing arts, it became a love acquired through travel. A mentor encouraged me to open my own gallery that focused on original and contemporary art and in turn, I opened Abbozzo Gallery in Oakville in 1993. We celebrated 25 years in business this spring. We will hold an official exhibition in the fall focusing on these past years.” 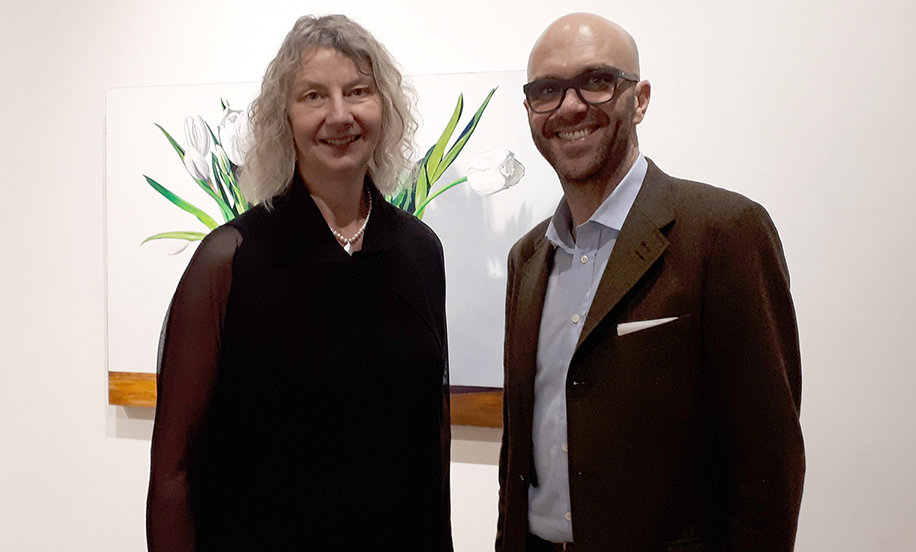 Zigrossi feels that her decision to move here from Oakville has been altogether positive: “We moved to Toronto five years ago after my four children went away to University and felt Toronto would be a great next move for our gallery. We have been welcomed and supported by UrbanSpace, the property management group for the 401 Richmond Building and love the feeling of community that has been fostered in this space. Since our move to 401 and the hiring of Marco Rosada, our Associate Director, we are moving towards a more International and Contemporary representation. Marco’s background has been shaped by growing up in his family’s Art Gallery business in Trieste, Italy.”